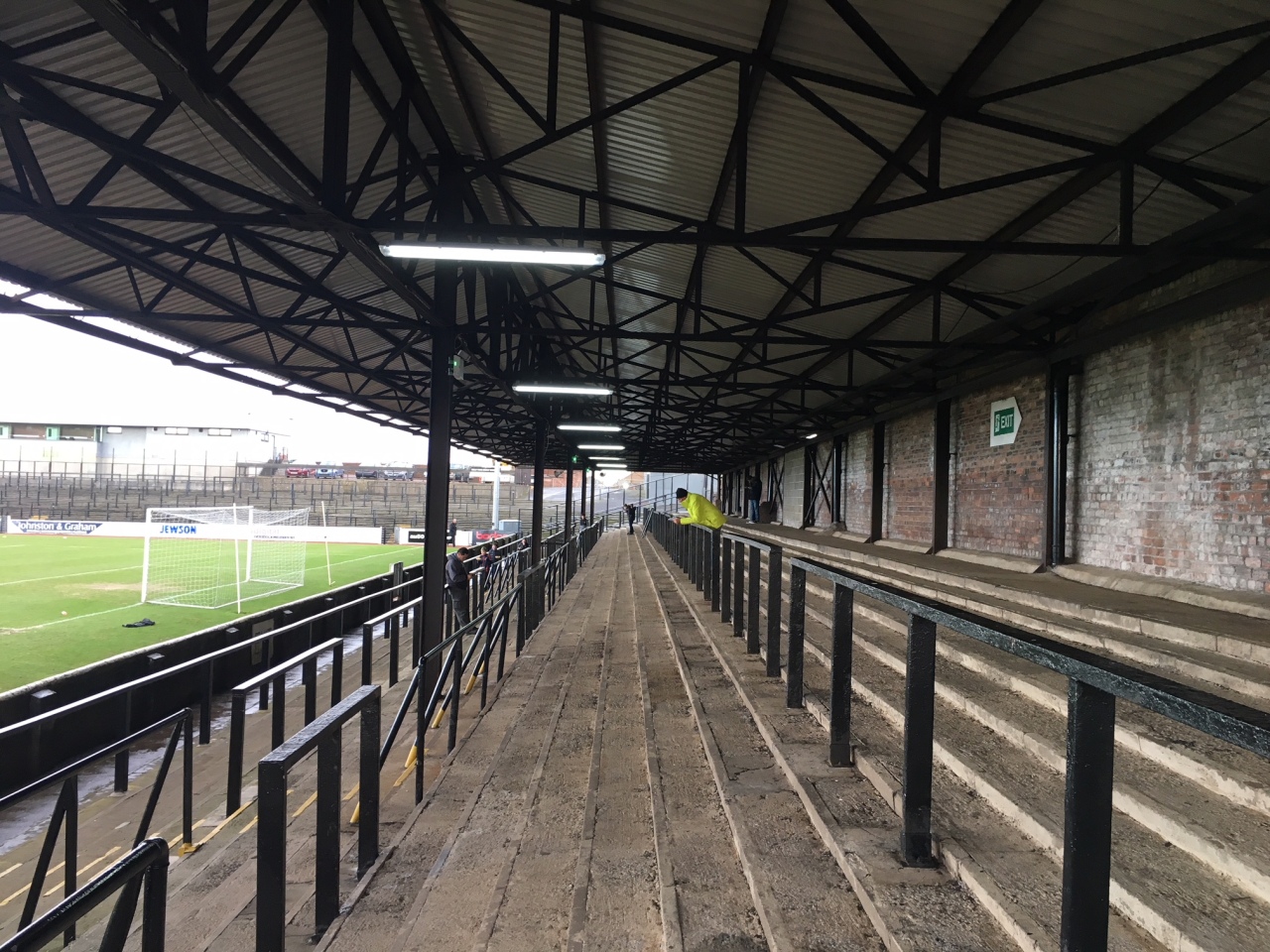 Rangers v Hibs at Ibrox was probably the stand out fixture in Scotland on this particular weekend. However, my sights were set on experiencing some lower league Scottish fitba and my short list had come down to just two games: Greenock Morton v Dunfermline or Ayr United v Alloa?

A business trip to Ayrshire had opened up this mouth-watering dilemma, but ultimately my choice was verging on the subliminal. Having spent most of my childhood and adolescent years growing up in Somerset and spending literally most of my ‘out of school’ daylight hours over the park playing football with my mates, I suppose it was inevitable that one day I would end up at the aptly named Somerset Park stadium to watch Ayr United! The Cappielow Stadium (home of Greenock Morton) looks a real gem by the way, but Somerset Park just drew me in like a midge to a tourist! 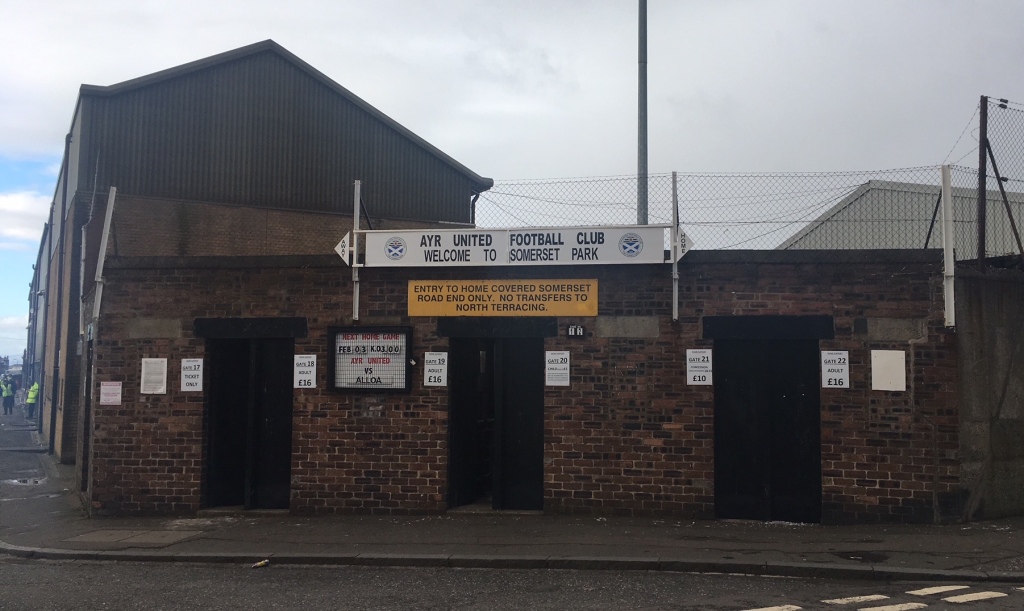 All roads in to Somerset Park lead to the stunning corner entrance on Somerset Road (pictured above) and from the moment I arrived it was like stepping back in time. A time when football was honest and pure. No frills, no spills, no fanciful extras, just a time when it was about local working class folk coming together to watch 90 minutes of football and escape from everyday life. 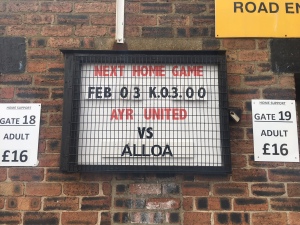 Classic old brickwork and a corrugated iron main stand provide a gritty exterior. Vintage match-day signage, and black iron ‘foot-pedal-operated’ turnstiles get things off to a nostalgic flyer as you make your way into the ground. Once inside I felt like I was immediately transported back to the late 80’s and early 90’s – my early memories of watching live football as a teenager at grounds like St James Park and Ashton Gate. With two covered terraces behind each goal; a long section of 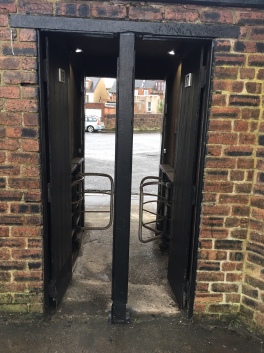 open aired terracing running down the entire length of one side of the
pitch; and an old main stand with small random sections of terracing adjacent to each side of the dug outs provide Somerset Park with real character. There’s plenty of options here if you like standing up to watch your football! A burger van located in the corner of the open terraced section, and supporters openly smoking on the terraces wafted over many of the smells I associated with standing on the terraces and watching the beautiful game back in the day. A half time prize draw conducted from a black and white hexagonal tombola was absolute gold, and a DJ playing 90’s dance music in the build-up and the half time break provided the perfect backing tracks to an afternoon of pure football nostalgia.

Somerset Park is a proper old school football ground that seems like it’s hardly changed since the day it was built back in 1910. It was a refreshing throwback, and one that has to be a bit of a collector’s item in amongst today’s modern and self-indulgent professional game. 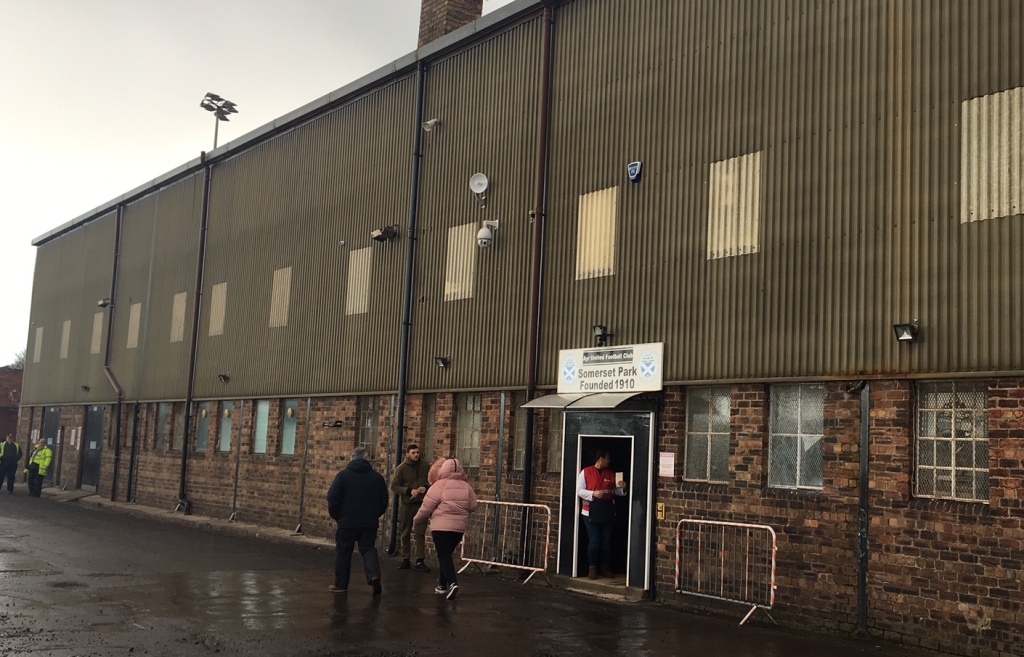 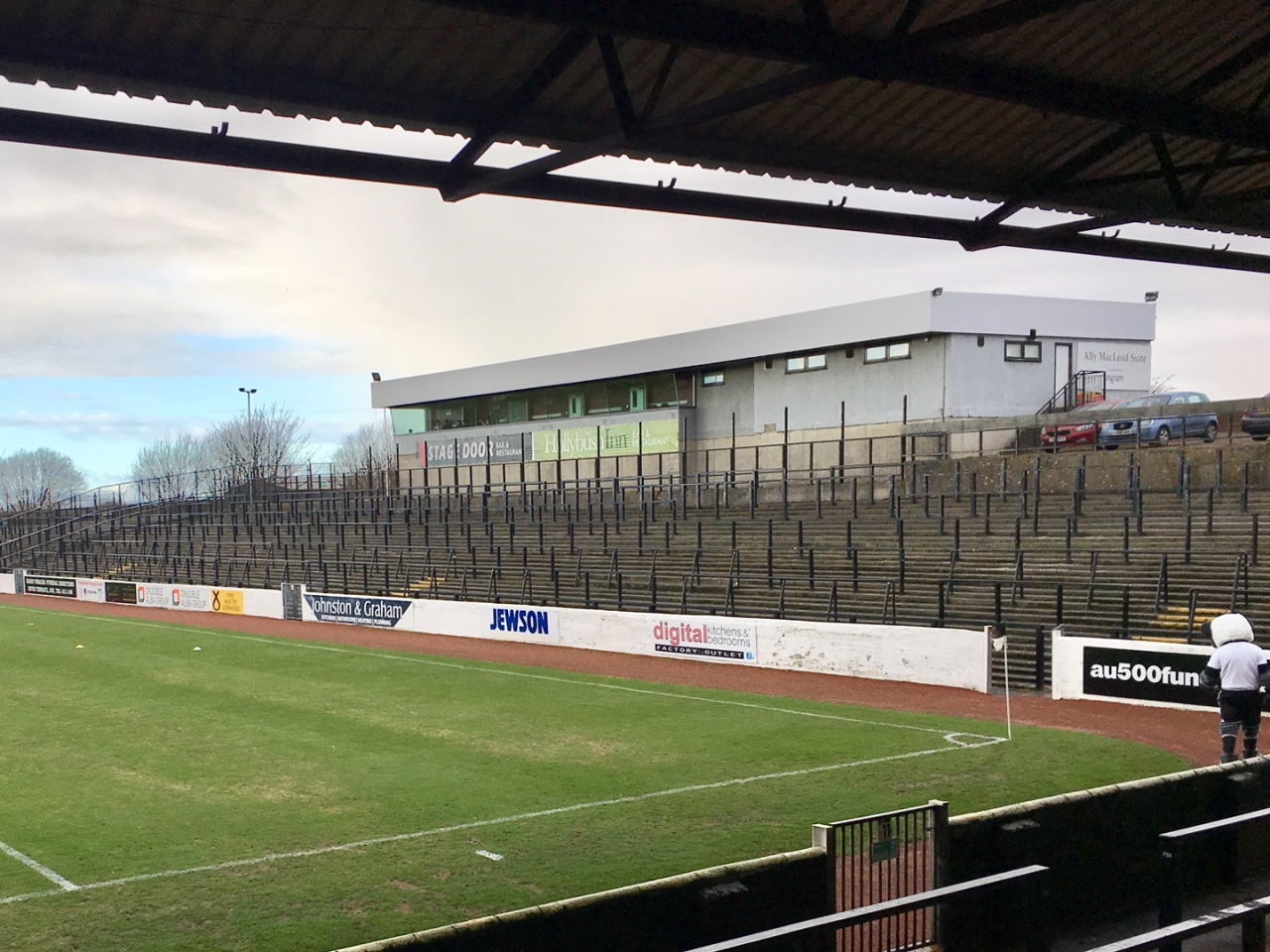 As kick off approached the rain started to drive in from the Firth of Clyde, but that didn’t deter the hardiest of Ayr United supporters who remained steadfast out on the open terracing!

Ayr United came into this game on a fairly decent run of form and seemingly scoring for fun. 15 goals in their last 4 games, and they were sitting pretty at the top of the table. Within 10 minutes of kick off the Honest Men were already one nil up and the goal fest looked like it was destined to continue. There was an air of inevitability about the opener, and what a cracker it was too. Lawrence Shankland did anything but shank his strike, as he caught a half volley perfectly on the rise, and looped a stunning strike from the right hand side of the penalty area over the keeper and into the far top left hand corner. “Take a bow son!” *attempts passionate Andy Gray impression*. 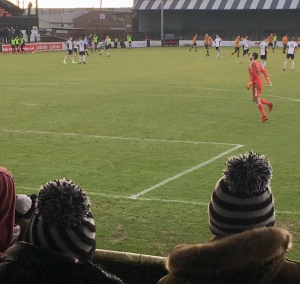 The lead was short lived though, as seven minutes later Ayr United were 2-1 down! The equaliser came on 14 minutes after Jamie McCart rose unchallenged to head home a corner from the right hand side. It all looked far too easy! “Shocking defending” *attempts ‘appalled’ Alan Hansen impression*.

Worse was to come though as a goalkeeping calamity – which did the Scottish goalkeeping stereotype no favours – hit Ayr Utd hard. As the ball was played back to Ayr keeper Jake Ruddy, I’m sure he visualised clearing the ball long up field to his striker – Lawrence Shankland. Unfortunately the attempted clearance from Ruddy was sent into ‘Shank-land’ instead, and landed straight at the feet of Alloa striker Ross Stewart. Stewart fired the ball back goal wards, but didn’t get a clean strike off. With time to reposition himself, Ruddy somehow managed to make a meal of what seemed to be a straightforward follow up save, slipping over at a crucial moment, which saw the ball just evade him and trickle into the back of the net. Jim Leighton would have been proud! Cue wild scenes in the small away ‘side-terrace’ – as the 20 odd travelling Alloa fans who were housed within it went berserk! 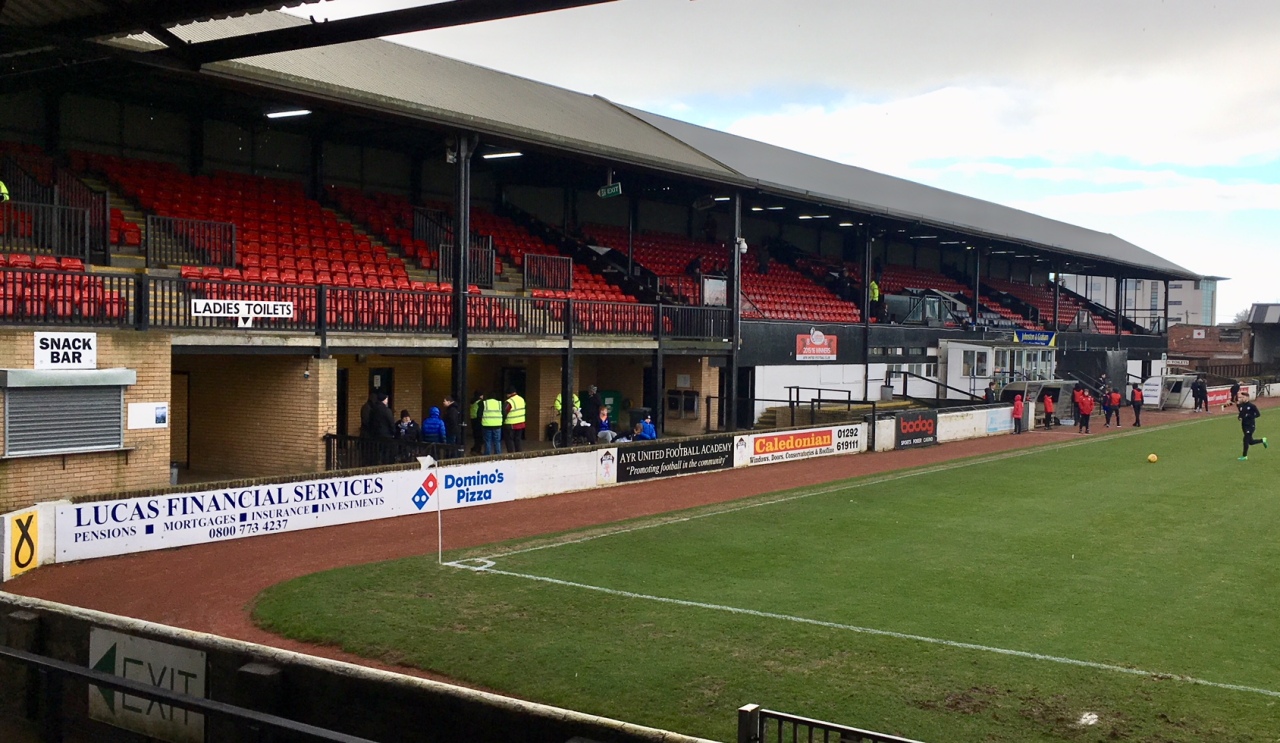 The away ‘side terrace’ here really deserves special mention in its own right, and needs to be seen to be believed. Located to the right hand side of the dug out below the main seated stand – this has to be one of the most unique and smallest sections of away terracing of any UK professional football club ground! 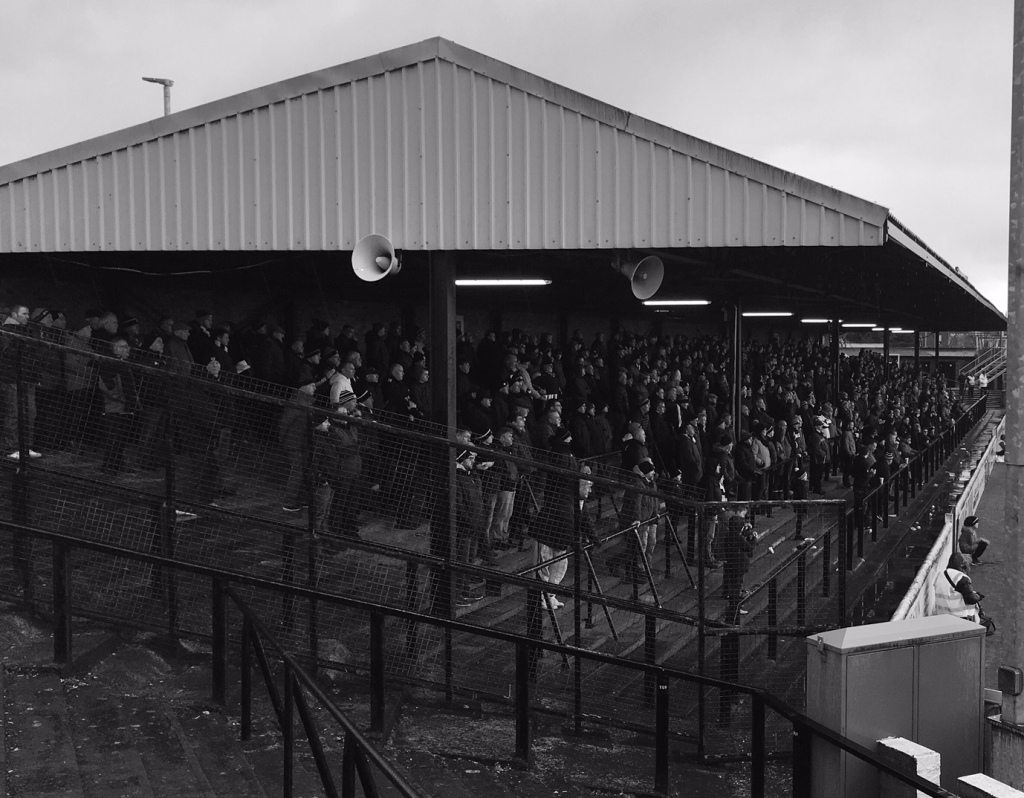 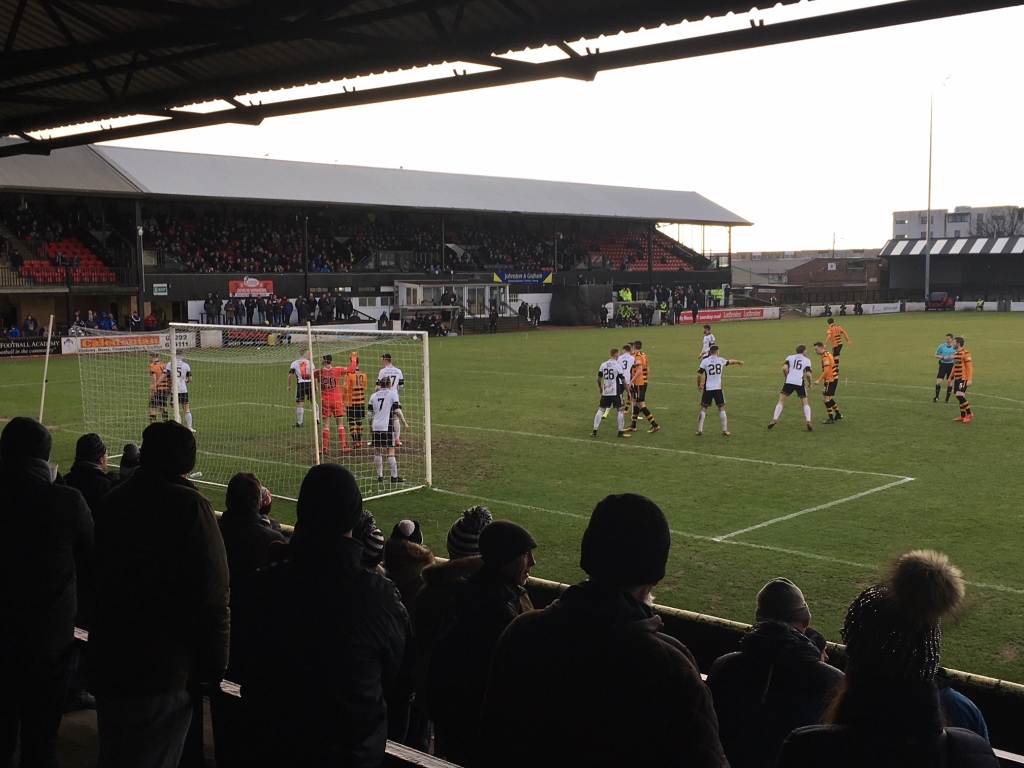 Unfortunately for the Ayr United faithful the rest of the game proved to be an afternoon of frustration, and the game fizzled out like a damp squib. An off day it certainly seemed to be for the Honest Men, and perhaps subconsciously, the players had their minds on their glamour Scottish FA Cup tie with Rangers the following weekend.

As a neutral though, my experience of Somerset Park wasn’t blotted by the result or performance, quite the opposite, it had provided the perfect afternoon of footballing reminiscence! 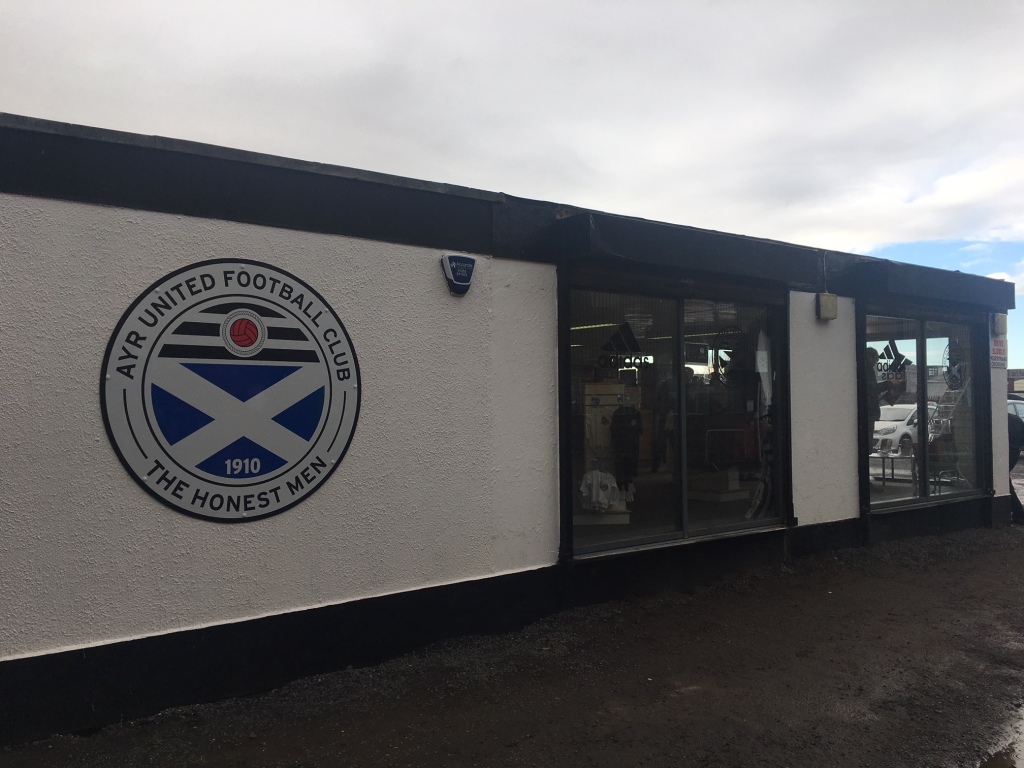 The Ayr Utd club shop (above) and Railway End (below)…