Originally booked some six months earlier this trip was heavily reliant on the Serie A & B fixtures computer playing a strong hand. The Derby D’Italia (Inter v Juventus) had already been given headline Saturday night TV billing, but the rest of the Serie A & B calendar was up for grabs and seemingly full of promise! Cremonese v Foggia, Chievo v Parma, Bologna v Empoli, Sampdoria v Lazio and Torino v AC Milan were all within striking distance of Milan, and with a staggered set of kick off times across most weekends in Italy, the greedy ‘ground –hopping’ part of me longed for a ‘four games in three days’ option! It wasn’t until about two weeks before that we were finally put out of our ‘fixture anticipation’ misery. It wasn’t quite what we’d hoped for, but we were still dealt a half decent, albeit reduced schedule, in the form of Inter v Juve at the San Siro on the Saturday night, and Torino v AC Milan on the Sunday night at the Stadio Olimpico. With an unexpected void of day time hours now to fill, and all ‘calcio’ options exhausted, the weekend suddenly opened up an impromptu spot of ‘ferry-hopping’ instead! 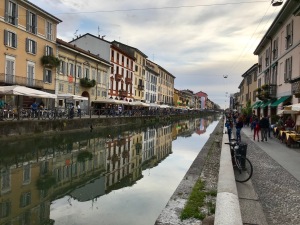 For those of you that have visited Milan before I am sure you will agree that it’s quite an industrial city, with not that much to be had in the way of sightseeing. Milan is certainly no Rome or Venice that’s for sure, and with a number of previous trips to Milan already under my belt, there’s only so many times you can visit the Duomo cathedral! With that said, the Navigli ‘canal’ district is well worth a visit though, and makes for a decent night out (restaurants and bars a plenty here!) amongst a picturesque waterside setting.

With time to spare on the Saturday, we decided to leave the city and head for the hills…..or the mountains I should say! ‘Varenna Esino’ was our destination – and an hour’s train ride north of Milan takes you to the heart of Lake Como. Flanked by the Swiss Alps, on a clear day the views from here are spectacular. From Varenna itself there are a network of ferries that will run you across Lake Como to various destinations such as Bellagio and Menaggio. Bellagio the closest and perhaps most famous of them all, is a stunning little town built on a steep hillside – the cobbled streets and hidden stairways set amongst brightly painted buildings provide a myriad of pathways to explore. A similar set up can be found in Varenna too, and stopping off for a beer, cappuccino or whatever takes your fancy is a must in a setting such as this! Eat your heart out James Richardson!

Here’s a few  shots from our ‘ferry-hopping’ trip on Lake Como to Bellagio and Varenna!

No sooner had we started fully immersing ourselves in Italian culture it was time to head back to Milan to immerse ourselves in a culture of a different kind. Inter v Juve, aka the ‘Derby D’Italia’. A moniker given by Italian sports journalist Giani Brera back in the 1960’s when, at the time, these clubs represented the two most successful teams in Italy in terms of most Scudetto wins. Whilst Juve are currently monopolising Italian football – they’ve just sewn up their 8th consecutive Serie A title – the Derby D’Italia reflects a fierce rivalry between two of Italy’s most famous football clubs and remains a key fixture for the bragging rights of the ultras. It’s also a headline act for the modern day ‘selfie-tastic’ football tourists! Hanging around the San Siro a few hours before kick-off and stood amongst the lines of panini vans and merchandising stalls enjoying a few beers it was clear this fixture had a global pull. There were No. 7 Ronaldo shirts everywhere (even in the home sections), and half-and-half scarves being snapped up a plenty by the football plastics. Social media profiles must have been in overdrive such was the amount of people taking staged selfies with their new half-and-halves in front of the Mecca that is the San Siro. Live and let live I suppose!

Despite all that though, there is something quite awe inspiring about the San Siro, and inside, the Curva Nord which houses the Irrudicibli (and a host of other Inter ultras groups) is still a sight and sound to behold. The Inter ultras track record in co-ordinating well-choreographed tifo displays is second to none.

Whilst the league was done and dusted for Juve, it was still a massive game for Inter as they looked to secure a top four spot, and close down the gap on 2nd place Napoli. The timing of the fixture was almost perfect for the Nerrazzuri as Juve had been knocked out of the Champions League quarter finals by Ajax just ten days earlier. The Bianconeri’s exit from Europe provided the Inter ultras with all the inspiration they needed to create the perfect thematic tifo display that would ultimately mock their bitter rival’s unexpected exit from Europe’s elite club competition.

Firstly, a banner inspired by Britney Spears was unfurled reading “Oops you did it again”! This was then replaced by a huge mosaic tifo depicting the Champions League trophy and a Champions League football with the words ‘Game Over’ emblazoned across the entire north stand. Simple but effective! 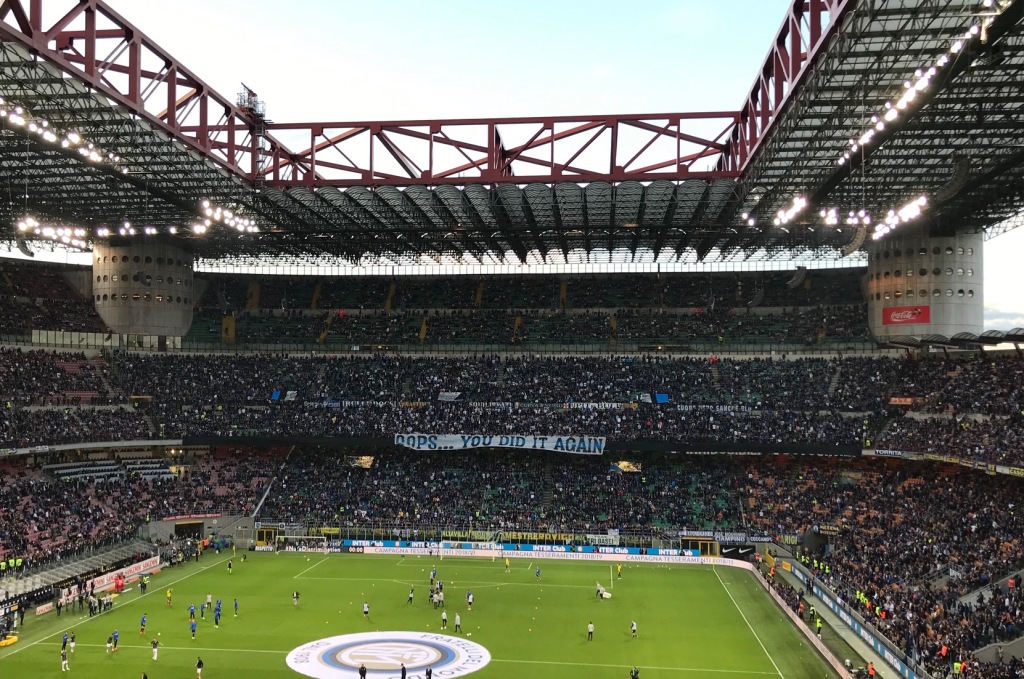 The Curva Nord (above and below)…

The game itself got off to an absolute flier, when Belgian midfielder Nainggolan unleashed a pile driver of a 25 yard volley that caught Juve keeper Szczesny by surprise and flew like an arrow into the far corner. The build-up was equally impressive too, as Politano played a looping blind pass back over his head to the edge of the box, from which Nainggolan despatched in style. An unbelievable assist rounded off with a stunning strike (see video clip below), and one that left you with goose-bumps such was the crescendo of noise and passion that greeted it! It was one of those goals you could only dream of scoring on such an occasion. Take a bow son! With an early lead, Inter continued to dominate the first half and they were unlucky not to be further in front as strikes by Icardi, Brosovic and Perisic all came close.

After what one could only assume was the Massimiliano Allegri equivalent of the Fergie hairdryer treatment at half time, Juve came out and looked an instantly different side in the second half! And that man for the big occasion that rarely seems to disappoint, once again stepped up to the plate when it mattered most. Juve’s equaliser was as equally impressive as Inter’s opener.  A slick build up saw Quadrado link up neatly with Ronaldo, who then played a quick one-two with Pjanic on the edge of the box. Pjanic back heeled a reverse pass to Ronaldo, who unleashed a first time left footed drive low into the bottom right hand corner. The shot caught Handanovic completely flat footed as he watched helplessly as the ball nestled in the back of the net. Cue wild scenes in the tier above us as the Juve fans finally had something to cheer about. Despite being Serie A Champions, and having about 6,000 there, the away end was a massive disappointment in terms of atmosphere. Maybe the novelty of winning your 8th consecutive league title had already worn off!!

The second half was a really open affair and there were decent chances for both sides to win the game, but the Derby D’Italia ended up all square and the spoils were shared.