After 12 months out of the blog writing game (mainly due to a long term parenting situation!) I’ve found myself making a brief come back to pen a few lines following a fantastic football weekend out in Italy and a long awaited debut at the Stadio Olimpico, no not the Rome one, the Turin one!

Set amidst a stunning backdrop of the Swiss Alps, the Stadio OIimpico in Turin – home of Torino FC – had long been on my ‘must visit Italian football clubs’ list – we’ve all got one of those haven’t we?! Perhaps it was a combination of some classic ‘Beretta’ sponsored shirts from the 90’s; faint memories of that UEFA Cup run of ’91-92; and legendary players such as Enzo Scifo and Gianluigi Lentini that were all factors in creating my pang for a visit to ‘Il Toro’!

Allow me to digress for a moment. Here at ‘Look at These Scenes’ I love my football, but I’m also partial to the great outdoors too – and thankfully northern Italy ticks both boxes on that front! Give me a mountain landscape or a coastal sunset and I’m a pig in shit! And if you love a mountain landscape as much as I do, then the train ride from Milano Centrale to Torino Porta Neuva will be right up your street! Shortly after leaving Milan, a 180 degree panoramic view of the Swiss & French Alps opens up, and the 1 hour train journey felt like it was over in 20 minutes. The stunning scenery provided a fantastic early ‘welcome to Turin’ as we pulled in to Porta Neuva station. A glorious sunny Sunday provided the perfect window for some early afternoon sight-seeing, and the walk up from the city centre to the ‘Monte dei Cappucini’ perched high above the Po River offers spectacular views out across the city and to the Swiss and French Alps that encompass it. Turin’s Mole Antonelliana the only high rise building to penetrate the city skyline and the panoramic landscape view.

Ok, that’s enough of the cultured stuff, let’s get back to the football. So, what’s there to know about Il Toro I hear you ask? Well, without doubt the most famous era of the clubs history came back in the 1940’s, a decade of Italian football dominated by a team known back then as the ‘Invincibles of Grande Torino’. This was an incredible side that won five league titles in a row in the mid-forties. In 1943 Torino were also the first club to win the Italian double – bringing home the Scudetto and Coppa Italia. Torino’s players at the time dominated the line-up of the Italian national team too, and at one point the Azzurri were simultaneously fielding ten players in their starting XI from Il Toro. This remarkable period of domestic success horrifically came to an abrupt end on 4 May 1949, when the Fiat G.212 aeroplane carrying the whole team back from a friendly against Benfica crashed into the retaining wall of the Basilica of Superga in Turin killing everyone on board.

More recently, perhaps Torino’s finest hour in European club competition came in the 1991-92 season when they knocked out European heavyweights Real Madrid in the semi-finals to reach the final of the UEFA Cup. After a two legged final (remember those!) Torino lost out to Ajax on the away goals rule, drawing the first leg 2-2 in Turin, and then drawing 0-0 in the second leg in Amsterdam. Fast forward to today and the 2018/19 season is shaping up to be Il Toro’s best league campaign for 27 years.

On the eve of the Milan game Torino were three points behind the Rossoneri and were in touching distance of a top four finish. All of a sudden obtaining a Champions League spot had started to become a distinct possibility! 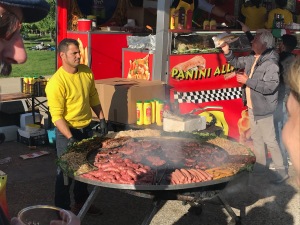 The Stadio Olimpico is located in the south of the city – about a 45 minute walk from the centre. A taxi out to the stadium will set you back about 12 euros and will drop you off at the entrance to ‘Piazzale Grande Torino’. Here you are greeted by what seems to be a big part of the Italian pre match football culture – lines of panini vans interspersed with merchandise stalls! They make for a great place to mix with fans and sample the pre-match build up. With the April sun shining down and glimpses of the ‘Matterhorn’ looming high in the distance, this was

the perfect spot for a few Sunday afternoon beers, whilst sporadically perusing for Torino merchandise to take back home!

The Stadio Olimpico was re-constructed in the early 1990’s to make the stadium suitable to host the 2006 Winter Olympics opening and closing ceremonies. I’d mistakenly assumed the Olimpico’s oval shape was due to the fact it accommodated an athletics track, but once inside the stadium it’s far more compact than it comes across on TV. With a capacity of approx 28,000, the Olimpico has no running track (high five!), and the Curvas at each end aren’t that far away from the action at all. A black bull statue stands between the goal and the Granata Nord – and symbolises the curva that houses the various Torino Ultras groups. A sea of maroon and white flags provided a visually impressive backdrop as the teams entered the pitch for kick off.

A quick word on Milan. Once a club synonymous with iconic names such as Maldini, Baresi, Gullit, Van Basten, Kaka, Boban, Savicevic, Shevchenko (need I go on), Milan is now a team seemingly struggling to make a name for itself. The household names of yesteryear have all but dried up as Milan try to re-build and develop a squad that is seriously capable of challenging the new top four of Juve, Napoli, Inter

and Roma. On this particular showing, an under resourced Milan side looked a long way from achieving that goal, and with key striker Krzysztof Piatek dropped to the bench, Milan really struggled to offer any real threat in front of goal. Torino on the other hand rose to the occasion, and put in a performance that was the epitome of collective effort and commitment, and they deservedly took all three points here. A stunning strike from Berenguer which left Donnarumma clutching at thin air sent the Granata Nord into delirium (see video clip below):

This was the first time Torino had beaten AC Milan in 18 years – and we now like to consider ourselves Il Toro’s lucky charm!

Post-match, and Gennaro Gattuso labelled AC Milan’s form an embarrassment, a performance which had left their Champions League hopes in tatters. Milan, with just one win in their last seven league outings were also dumped out of the Coppa Italia by Lazio in midweek. Gattuso wasn’t a happy bunny, and his quotes from the post-match press conference made for essential reading as he pulled no punches on his Milan teams state of mind.

“We are having less fun than two months ago and that takes a toll. We’re not sharp, we think too much and that saps your enthusiasm”. “This is why I say that I can’t get in the heads of the players, as I want them to have the eye of the tiger, a constant grit and determination, but it’s not happening. “I am tied to results, I am responsible. We are not only having embarrassing results for our team, we’re embarrassing an historic club”.”We lack calm, a series of results to give us confidence. We’re practically punching ourselves in the face, as we gave away negative situations.”

Asked if he was being too harsh on his players, Gattuso replied: “I was always harsh on myself as a player and I am the same as a coach, but it’s the only way I know how to improve”.

“If I analyse the bigger picture, it’s true that Milan haven’t even challenged for the top four for years, so we’ve done some good things”. “We’re not the best team in Italy, but we have a squad that can improve”. (source: Sempremilan.com).

Torino and Walter Mazzarri on the other hand are working miracles, and are on the cusp of something special here. I sincerely hope they finish the season strongly and break into that top four. That maybe a step too far, but a return to Europe in some shape or form would be a massive achievement for Il Toro!

Foot note: That long term parenting situation that I mentioned in the opening line of this piece has clearly affected my ability to post this article before the end of the Serie A season! Sadly at the time of posting Torino finished in 7th place just missing out on a Europa League spot by 2 points. Still a top season nonetheless!