We all remember our Champions League debuts. Mine was to include a carefully planned double header: Juve v Dynamo Kiev in Turin on the Tuesday night and Inter v Ajax in Milan on the Wednesday. It was this kind of trip – where you try to cram in as many games as you can in a short space of time built around a ridiculous travel itinerary – that would prove ever popular during my future excursions!

Tuesday 24th September, and we were up before the crack of dawn at 03.00am to get to Stansted Airport in time for check in for the 06.30am flight to Milan. Looking back on it I’m not sure why we didn’t fly direct to Turin on the outbound; maybe there weren’t any direct flights on this particular day or maybe we couldn’t afford it at the time!

On arrival in Milan we caught the airport shuttle into the city centre, where we toyed with the idea of trying to secure tickets for the Inter game the following night. I’d heard that several outlets sold Inter tickets across the city – agency offices, specific bank branches etc. However after a quick look around with no joy, we decided to knock it on the head and head off to Milan Centrale Station to catch our train onto Turin. We would have to ‘chance our luck’ with the touts at the San Siro.

The train to Turin takes about 2 hours and is a fairly uneventful journey. On arrival we checked into our hotel and then headed straight off to the Stadio Delle Alpi. The stadium is not the easiest to get to, but can be reached by tram from Porta Nuova, or bus from Via Bertola. 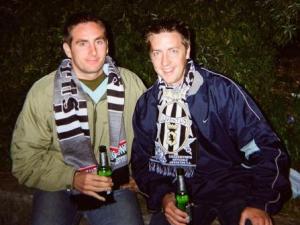 We had secured tickets through the club website and managed to find the internet sales collection point easily outside the ground. We’d arrived at the stadium a few hours before kickoff and with tickets already in hand, we had plenty of time to kill, so we purchased our Juve scarves, and then went onto do what the Italians generally don’t and enjoy a few cold beers on the street outside!

This was to be match day 3 of the Champions League, and Juve’s first home game in a group that also included Newcastle and Feyenoord. This was also in the days where competing clubs had to play through two groups stages to make it through the quarter finals – and they complain about fixture congestion now in 2012!

Inside the stadium there was a below average crowd building – the only ‘busy’ section was the Curva away to our left which housed the Juve ultras. A number of black and white banners had been unfurled to cover the entire width of the curve creating an impressive back drop between the stand, the athletics track and the goal. 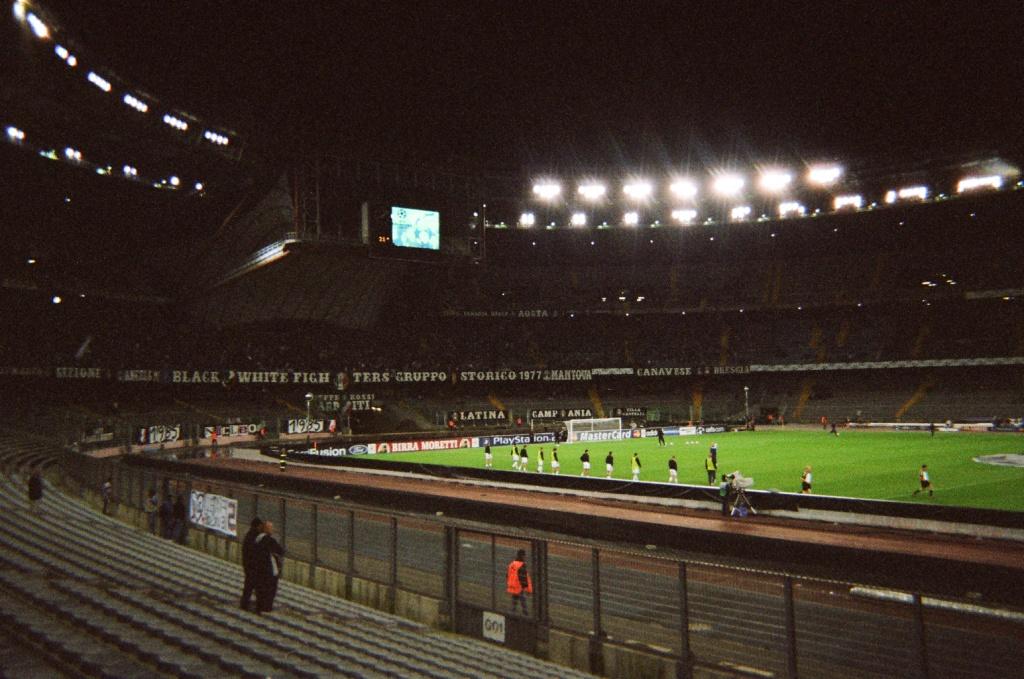 I remember watching both sides warm up for the game and noticing Edgar Davids break off for some additional 1:1 work with one of the Juve coaches. What followed was one of the most intensive pre match work outs I have ever seen – Davids went through a series of sprint routines whilst passing and heading the ball. How he had anything left in the tank after that was unbelievable. He did more in those 5-10 minutes than I did in 90 minutes at the height of my Sunday league career!

The game itself, as the score line suggests was slightly one sided to say the least and Juve dished out one of the heaviest champion’s league group stage defeats at that time. The pick of the goals came from a sweeping counter attack move from the edge of their own box, with Nedved releasing Davids about 45 yards from goal. Davids still had a lot of work to do and went onto beat two defenders and the goalkeeper at pace scoring from a tight angle. Have a look at the youtube clip below as my description really doesn’t do it justice:

The other goals came through Del Piero, Nedved and a brace from Di Vaio (2). Job done.

Back in the city centre after the game we went for a few late beers to reflect on the battering we had just witnessed – but having been up for nearly 24 hours – the hotel was soon calling us in.