Back in 2003, the FA discouraged England fans from travelling to Skopje for fear of hooliganism that could see harsh sanctions imposed on the team ahead of the Euro 2004 tournament. This warning came after there had been crowd trouble during England’s home match against Turkey in the group stage in April 2003. The FA gave the 2,500 allocation of tickets to local underprivileged youngsters.

Three years on, and England were once again due to visit to Skopje for the opening away game of the Euro 2008 qualifying campaign, this time fans given the all clear to travel.

As I was travelling alone, low on annual leave (following the World Cup in Germany), and with no direct route into Skopje at the time, I decided to book on to the FA’s official ‘day trip’. This involved catching a 3-hour flight from Gatwick at silly o’clock in the morning that would see me arrive in Skopje by 11am.

Coach transfer from the airport was 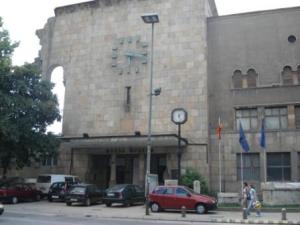 laid on as part of the package and we were dropped off in close proximity to the ‘Gradski’ Stadium (as it was known back then). The stadium is located north-west of the city centre close to the River Vardar and the City Park area. It is a pleasant 15-20 minute walk into the city centre along the river.

Skopje – the birthplace of Mother Theresa (not a lot of people know that!!) – is a fairly small city and the central parts are easily covered on foot. A late morning stroll through Macedonia Square; on past the Old Railway Station; a glance up to the Millennium Cross that looks down on the city from the Vodno mountain (a

poor man’s nod to ‘Christ the Redeemer’); a loop back round past the Stone Bridge crossing the River Vardar and you have ticked off most of the main sights that the city has to offer!

The rest of the afternoon was spent drinking ‘Skopsko Pivara’ in the riverside bars with a Fulham fan I’d met on the coach transfer from the airport. Meeting like minded football travellers always helped pass the time on trips like this and interesting to hear other fans tales of travel across Europe watching the beautiful game.

After a good few hours spent drinking in the Macedonian sunshine we headed back out towards the stadium as kickoff approached. On the riverside walk we stopped to talk to a middle aged Macedonian ‘David Lee Travis look-a-alike’ (photo left) who had stopped us, and was pleased to talk to us about English football and in particular Cheltenham Town – his favourite English team. Nothing unusual about this I hear you say, but ironically one of my best mates is a Robins fan and he will tell you it’s not often you bump into one them in the UK let alone in Macedonia! The randomness of this bizarre meeting you couldn’t make up.

The Gradski Stadium is a lop sided stadium – dominated by one steep main stand that accommodates 12,000; with the other three remaining stands offering small compact terraced areas. Aside from being the national stadium, it also doubles up as home to domestic club sides FK Rabotnicki and FK Vardar.

The ‘Macedonian Heroes’, the ultras group situated over to our right unveiled their ‘tifo’ prior to kick off – a Macedonian flag banner easily encompassing their entire narrow terraced area. For a small uncovered terraced section they generated a hostile atmosphere for the game which added to the occasion. At half time the ‘Macedonian Heroes’ turned into the ‘Macedonian Twats’ as their attention was focused on the England section located adjacent to them and started throwing stones and small rocks. The police had to move them back to prevent the rock shower continuing. Stone and rock dodging was a half time entertainment of a different kind!

The game was a really close encounter and England gained a hard fought one-nil victory through Peter Crouch’s 46’ minute strike that rebounded back off the bar but luckily crossed the line.

Straight after the final whistle we made our way back to the coaches for the transfer back to the airport. We were delayed en route as all the supporters coaches were made to pull over to the side of the road to let the police escorted players coach through to the airport first. Sod the sleep deprived fans and their economy flights – the premier league stars come first! It was approaching 3am by the time we landed back at Gatwick and it was 5am by the time I’d made it back home.