This was one of the easier away trips to do, a short hop across the North Sea and you’re in Amsterdam in 45 minutes flying time from London. Booked on separate flights I’d arrange to meet Mark and Ian at Schiphol airport where an afternoon of city centre drinking would prevail. After the dismal showing in Zagreb on the previous away game, an afternoon of drinking strong Dutch lager seemed the perfect preparation for another eagerly anticipated England friendly. For shh-uurre.

Unlike most other away trips, this was a ‘smash and grab’ visit to the ‘dam’. Widespread city sightseeing was scratched off the itinerary, although there was some sightseeing of a different kind to be had as we wandered the streets, canals and bars of the De Wallen district of Amsterdam situated close to the Centraal Station.

De Wallen, more famous for being the largest and best known red-light district in the city, has become a major tourist attraction in itself. The district consists of a network of alleys containing approximately 300 small one-room cabins rented by prostitutes, who offer their sexual services from behind a window or glass door. I must thank ‘wikipedia’ for providing the informative section of this post! The district also has a number of other attractions including sex shops, sex theatre’s, coffee shops and bars most often selling marijuana as well as liquid refreshments. The place is vibrant and full of visitors intrigued by the unique setting and make up. 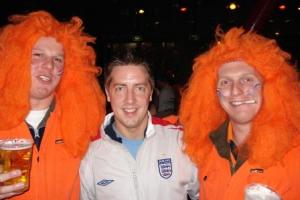 A good few hours into the pre-match warm up and it was time for a change of scenery. We headed out to the Amsterdam Arena, which is located about a 15 minute train ride from the centruum. A fairly new build stadium, the ground is surrounded by a host of shops, bars and restaurants. Although mainly full of the ‘Oranje Army’ we decided to venture in and mingle with the locals. We were bestowed a warmer welcome than we anticipated, and soon got chatting to a number of fans, swopping stories of football allegiances and a whole host of other nonsense that i can’t remember. Colourful at the best of times, dutch fans will always turn out in whatever bright orange garments they can get their hands on. Overalls, dungarees, weird hats, wigs, you name it they wear it!

At one point we were having a serious conversation with a group of dutch fellas who were wearing bright orange wigs. Ian then decided it was time for his party-piece and did his best ‘King Louie’ from the Jungle Book impression. I’d give him a 9/10.

8,000 England fans were split over two tiers of the stadium. We were located in the upper section – in an area that would normally house away fans for Ajax’s domestic games.  It was like being in a goldfish bowl – thick high Perspex fencing on both sides and in front, trimmed with a metal perforation. I have to say watching the game through the Perspex was a bit blurry (or maybe that was just the effect of the pre-match drinking). It was definitely the perspex. 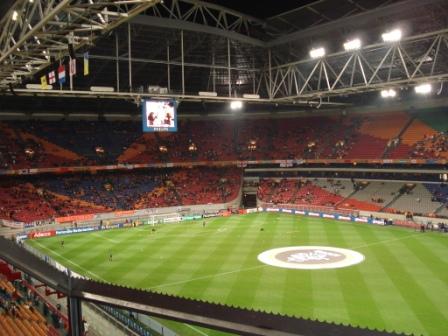 To be honest I don’t have a great re-collection of moments from the match, and I vaguely remember thinking the game had lived up to its ‘international friendly’ billing by being pretty poor! Those thoughts were confirmed in the following days press –“England controlled a poor game”….”England deprived of a morale boosting victory”…were just some of the quotes.

At least it was a quick journey back home this time.