There are some football trips that provide an all-round decent few days away and then there are others that provide you with an experience you will never forget. Russia away was to fall into the latter category. Setting off for Moscow there was a slight feeling of unease and uncertainty – we knew we we’re entering the unknown to some extent – and heading to a country where there was a massively different culture and societal system. The pre trip guide circulated via the FA outlined the ‘do’s and don’ts’, and the added difficulty of the language barrier and getting your head round the Cyrillic alphabet probably added to it all!

The scene was set from the moment we touched down at Moscow’s Sheremetyevo airport – it was dark, murky, cold, with heavy snow falling – everything we were stereotypically expecting! After a delayed flight from Warsaw, and by the time we’d had our visas scrutinised by passport control we were 3 hours late for our pre-booked cab that was scheduled to take us to our hotel. We had been warned to expect overzealous cab drivers touting for business, and as the sliding doors opened to the arrivals hall it was like entering another world. The place was packed full of people, but fortunately our cab driver had shown the patience of a saint and was stood there at the front of the taxi driver scrum. Although he didn’t look delighted to see us, we were over the moon to see him!

The Cosmos Hotel – big enough for ya?!

Home for the next 4 days was the ‘Cosmos Hotel’ – quite possibly the largest hotel I have ever stayed at: 1,777 rooms set over 25 floors; the reception area alone resembled an airport terminal departure lounge!

The day before the game was allocated to Moscow sightseeing, but first we had to negotiate the famous but difficult to navigate Moscow metro system. The Cyrillic alphabet isn’t the easiest to work with, and as a native Englishmen i liken it to deciphering hieroglyphics, and working out the stations on the metro map was like memorising a series of patterned sequences. Either that or you count the number of stops whilst on the train and hope you stay focused. The Moscow metro system is spectacular on many fronts:

1)    Ridiculously long escalators: I thought London’s ‘Angel’ tube station had a long escalator. Pop to Moscow and our hotel metro stop in particular – VDNKh – it’s insane! Stood at the top you could barely make out the bottom of it. To put it into context there are parts of the metro system that are 84 metres below ground level.

2)    Amazing architecture: The Moscow Metro was one of the USSR’s most extravagant architectural projects. Stalin ordered a design structure that embodied radiance and brilliance, and many stations have impressive reflective marble walls, high ceilings and grandiose chandeliers.

3)    Volume of people using it: Moscow is probably in the top 3 most heavily used subway systems in the world. There are certain stations that have one central platform with trains pulling in on either side. Platforms can be absolutely packed one minute and the cross over between people getting on and people getting off is mental.

4)    Lack of station signage: Many stations had very little in the way of signage – so it was extremely difficult to work out where you are or which platform is which for which direction. 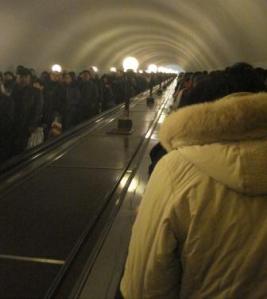 Longest escalator in the world at VDNKh?

For the main sights you can alight at ‘Ploschad Revolutsii’ station and the Red Square and Kremlin is only a few minutes’ walk away. As you walk past the Resurrection Gate (left) and Iberian Chapel into Red Square, you can’t help but be blown away by the stature and beauty of this historical site. St Basils Cathedral provides a colourful ‘fairytale’ backdrop to the square.

Over on the right hand side of the square is a low level building adjacent to the walls of the Kremlin. I’d noticed a few people enter through a security corden and assumed this was the way into the Kremlin. Approaching two armed soldiers to see if we could get in we were informed in cold broken English that it was closed. Strange as it was late morning and not the usual time tourist attractions were shut! Russia is ‘allegedly’ known for its corruption – and the colour of a bundle of roubles seemed to re-open the doors to the attraction and a few moments later we were on our way in.

As we entered the building we were directed down some stairs and into a dimly lit passageway. Down further flights of stairs we began to wonder what I’d actually bribed us entry into. After moving down about 5 flights of stairs – a sombre looking soldier positioned on each flight – we finally entered a dark chamber with what appeared to be a man lying down as the main attraction. This was Lenin’s Morsoleum!! After a few moments staring at the former communist revolutionary we were ushered towards the exit doors, back up some stairs and within minutes we were back in Red Square. Anyone fancy the Kremlin then?

The Kremlin is equally impressive and a must see on any visit to Moscow. Enclosed by high red brick walls; it contains some stunning palaces and churches including the Assumption Cathedral, the Church of the Twelve Apostles and the Church of the Deposition of the Robe.

Safely back at the Cosmos, there had been many stories filtering through of random attacks on English fans throughout the city by groups of Russian hooligans. Many fans

staying at the same hotel bore the scars of these attacks, and provided a stark reminder of the hostilities that could be faced if you ended up in the wrong place at the wrong time. We opted for an evening in the confines of the Cosmos enjoying an array of vodka and Russian beers. The main beer – Baltika – comes in 9 different strengths ranging from 1 (4.4%) to 9 (8%) and is distinguished by a number featured on the bottle or beer pumps in the bars.

Match day, and despite the impressive sights, there was something uncomfortable about being in Moscow. It may have been the generally cold reception we got from the locals; the many stories we’d heard of fans being attacked by Russian hooligans; and generally just feeling out of your comfort zone. Combine that uneasiness with the fact that England really needed to get something from the game and the occasion felt massive! There were about 1,500 englandfans staying at the Cosmos hotel and on the afternoon of the match we were bussed into the Luzinski Stadium with a police escort. It took over an hour to make it to the ground due to heavy traffic. 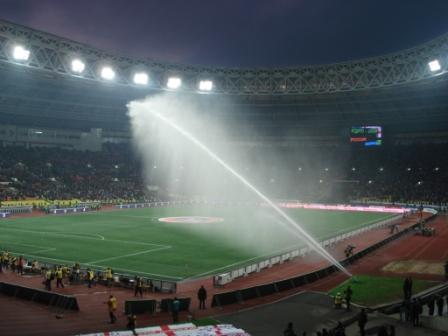 Watering the artificial pitch before kick off – a late tactic employed by the Russians!

The Luzhniki Stadium was a 84,700 sell out. The controversial 4G artificial pitch remained for this game and was another factor stacking up against England’s chances. The match definitely had one of those “backs to the wall” feels about it, but being inside the ground stood alongside 5,000 other English fans that had travelled, provided a feeling of unity and pride, and an adrenalin that is difficult to explain.

The atmosphere at the Luzhniki was incredible that night – and without doubt one of the best i’d experienced at an international. The Russians whistling everytime England sang, and that classic Russian sound of ‘Gazoo’s constantly humming around the stadium. The Russians unveiled a massive banner shortly before kick off depicting a raging bear – assumingly sending the message that they were going to rip us to pieces! At the time it was the largest surfer flag displayed at a football match – it covered the entire main stand and god knows how they folded that one back up and got it into the boot of their car!

England started the game well, and when Rooney slammed in a half volley from outside the box to give England a 1-0 lead on 29’, the England end went absolutely mental. Jumping up and down like a man possessed I’ve never celebrated a goal like I did that one that night! That adrenalin high was relatively short lived however as two Pavluchenko strikes in four second half minutes (69’ and 73’) turned the game on its head.

After making it back from the stadium to the comfort of our hotel lobby there was time for one last surprise. A mob of Russian hooligans stormed the hotel in attempt to fight some English fans. Initially a load of beer bottles were thrown through the reception doors at the English fans drinking in the reception area. After being chased back outside by a group of England fans, armed police were soon on the scene. The police formed an armed guard across the entrance door for the rest of the night and placed an armoured tank vehicle across the road entrance to the hotel. Quite a bizarre sight – but at least provided a bit of security to those inside.

Many fans I’ve spoken to since had terrible tales to tell of their experiences in Moscow. Thankfully we got lucky, and despite the feeling of being ‘on edge’ the whole time and massively out of your comfort zone, I have decent memories from our trip to Moscow – certainly an experience not to be forgotten. 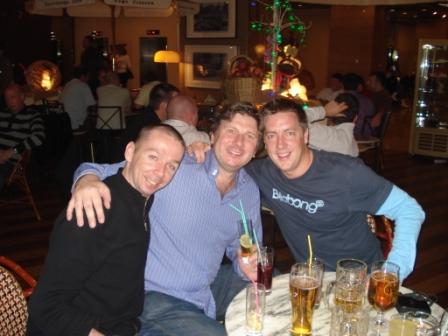 Kev, Mark and Jeff in the Cosmos (that’s Baltika No.7 at the front!)

The roads in Moscow are mental – six lane highways are the norm!