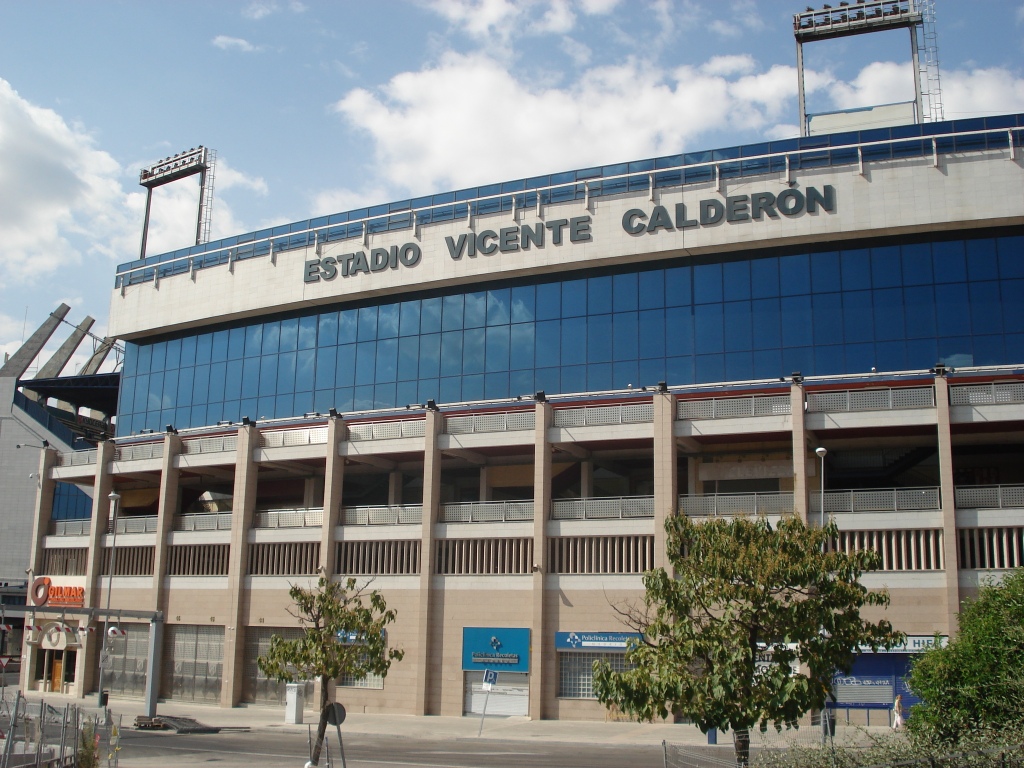 Day seven, and a short flight from Porto across the border into Spain to the capital city of Madrid. Our final game of the trip was a taste of La Liga action and a visit to the Vicente Calderon. On arrival at Madrid airport there was no security or passport control to pass through and no sooner were we off the plane were we on the metro into town! Maybe flying between Portugal and Spain is the equivalent of driving from England into Wales!?

For me, Atletico Madrid has always had a somewhat south American feel to it – maybe it’s the classic red and white striped shirts and blue shorts (shades of Paraguay); the strong connection the club has had signing players from that part of the world; and the open bowl like stadium that adds to that impression. The Vicente Calderon is an impressive looking ground and inside the tiers are coloured co-ordinated to like the home kit – red and white striped upper tier, blue lower tier!

By all accounts, Atletico Madrid rarely sells out with the exception of the derby against Real and the visit of Barcelona. Although the visit of Racing is not particularly a big drawer, we picked up tickets the day before the game from the ticket kiosks located on the corner of the main covered stand – the one that has a main road passing underneath it! 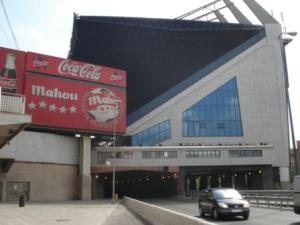 Madrid is not only a fantastic footballing city to visit (three other clubs are based here in Real, Getafe and Rayo Vallecano) but it also has a really vibrant nightlife. The ‘Madrileños’ think nothing of starting their night out at 11pm, going for a meal and then on for a few drinks. There are loads of bars and cafes located along the narrow streets surrounding the Peurto del Sol and Gran Via areas of the city, many open late into the night.

With our heads fully engrained into English culture we started our night out at 7pm and thought we’d show the Madrileños how it’s really done. By the time it got to six the next morning, we we’re just about stood up in a pub near ‘Sol’ enjoying one last beer before the city metro started back up! At that stage there was confident talk of making the lunch time game at Rayo Vallecano – but fast forward 4 hours when the alarm went off – and that confidence turned into reluctance!

Bars on the narrow streets off Peurto del Sol & Gran Via

On a match day, the area surrounding the Vicente Calderon can be quite a sight, as red and white shirted fans pack out the small street side cafes and bars. Along ‘Calle Toledo’ (one of the main roads to the city centre) there are many such places to enjoy a pre match drink, and there is a really vibrant feel to the area as kickoff approaches.

Inside the ground, the Atletico Madrid ‘Frente’ ultras stand at the south end of the ground and the atmosphere generally spreads around the ground like a wave from here.

With a host of top names in the home line up including Raul Garcia, Reyes, Maniche, Forlan and Aguero, this looked on paper to be as much of a home banker as you’ll get in La Liga. The game itself was ridiculously one-sided and Atletico’s attacking talent ran riot. Four goals scored by four different scorers – Garcia (17’), Aguero (70’), Forlan (77’) and Simao (86’) and Racing were grateful to hear the final whistle. 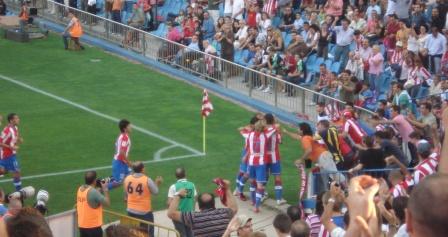 In my opinion, there is something more authentic and intrinsic about the experience of watching Atletico at the Vicente Calderon compared to watching Real and the ‘Galactico’s’ at the Bernabeu. I don’t know how to explain it; maybe one is like going to the theatre, the other a rock concert?…either way my affinity lies with Atleti!