Less than 24 hours after England’s defeat to Germany in Bloemfontein, we were sat some 655km away in the Moses Mahbida Stadium in Durban for Holland v Slovakia in the second stage of the 2010 World Cup.

To have a chance of watching this game we had to endure a 10 hour overnight coach journey from Bloemfontein to Durban that set off at 01.00am. The journey by road is a long and arduous one, made longer by the fact that you have to circumnavigate Lesotho – a small landlocked country that is located slap bang in between Bloem and Durban!

Coach journeys (especially 10 hour ones!) are my least favourite form of public transportation. Still being knackered from the 28 hour journey out to South Africa a few days before, getting some shut eye on the coach was probably easier than it normally would have been and at least broke up the long journey. As the sun rose at around 5.30am it made for an interesting journey as we snaked through the South African countryside down to Durban on the south coast.

With England out, Durban was our tournament base for the rest of our World Cup holiday; pre-selected for its warm sub tropical climate (a bonus in the winter months!) and its stunning beach front location.

Durban’s city beachfront area is known as the ‘Golden Mile’ and is a popular area for visiting tourists.  The Golden Mile was redeveloped in 2009 ahead of the World Cup and has a pedestrian promenade linking the Ushaka Marine World at the port end, right down to the Moses Mahbida Stadium at the Stamford Hill end of the city. 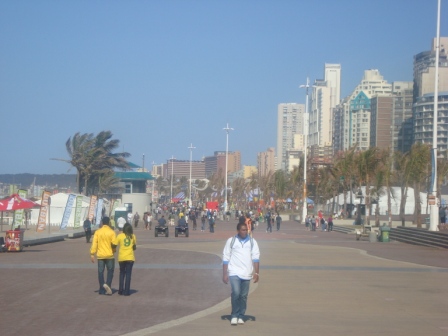 The beachside promenade area is lined with bars, hotels, and market areas and is a great place to soak up the atmosphere before a game. The Moses Mahbida Stadium is only a 10 minute walk away from the beach front, and as far as pre-game locations the Golden Mile has to be up there.

All other matches played outside of Durban were shown on the big screens on the beach based FIFA Fan Park – a fantastic location to enjoy a few beers and catch all the action with thousands of other fans. 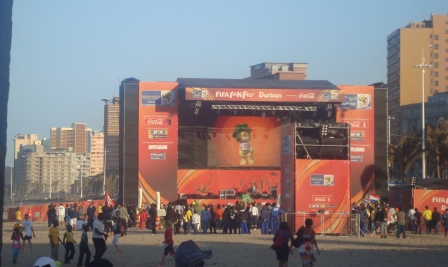 During our time in Durban we were staying in a small town called Umhlanga Rocks – a  seaside / surf resort located about 5 minutes drive east on the M4 highway from Durban.

I had managed to secure tickets for this game via the FIFA online ticket portal a few months before the tournament started. Despite all of the pre-tournament structured sales windows advertised by FIFA and promises of a sell out; many tickets were being released on a daily basis in the lead up to the tournament and if you were online at the right time it wasn’t too hard to pick up tickets for a lot of the matches.

Even whilst we were out in South Africa it was possible to pick up tickets through official channels for most games up until the Semi Finals. The problem was the distance between the host cities made it very difficult to just set off on a whim somewhere to see a game if you could get hold of ticket. 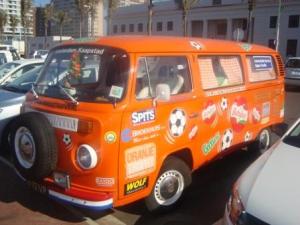 The Holland Team Bus stops off at the Golden Mile….

We had a spare ticket for Holland v Slovakia and struggled to sell it on even at face value. It was a ‘buyers’ market and there seemed to be many other fans looking to get rid of spare tickets to.

The Moses Mahbida Stadium is an impressive newly built stadium located in the Stamford Hill suburb of the city which is very close to the beach. Reminiscent of Wembley, the stadium has a huge arch supporting the roof of the stadium. Apparently the top of the arch is 106 metres above the pitch, and represents the once divided nation coming together.

Holland have always tended to have a good international following at major tournaments, but in South Africa this was enhanced due to their historic links to the country. The Netherlands and its people played a strong role in the earliest of European settlements in South Africa back in the 1600’s and there is still a strong connection between the Dutch and Afrikaans language today. 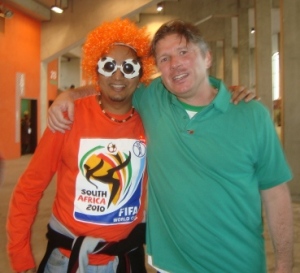 It quickly became apparent here that Holland were the local’s second team. Durban has a very strong Indian influence and there were many Indian people visible in the crowd dressed in all manner of bright orange garments – anything they could lay their hands on. It made for an amusing, albeit slightly plastic fan base for the Dutch!

After the tensions and stress of watching England crash out the day before it was nice to sit back and watch a game with no emotional ties. That was until the annoying sound of hundreds of ‘vuvuzela’s’ being blown simultaneously around us sparked off emotions of a different kind!

The plastic Dutch and the vuvuzelas were out in full force!!….

Holland took the lead in the first half following a fine individual effort from Arjen Robben, who took on the Slovakian defence and scored from 25 yards in the 18th minute.

Despite having more of the possession, the game remained finely balanced and Slovakia had two really good chances to equalise, but were thwarted by two top saves from the Dutch keeper Stekelenburg. 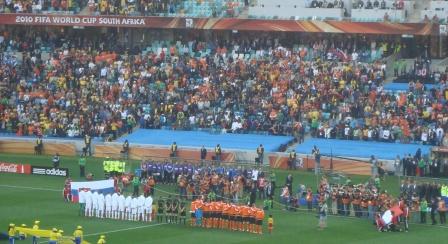 Holland finally managed to put the game to bed in the 84th minute with Sneijder finishing off a well worked Dutch move. An injury time penalty for Slovakia scored by Vittek in the 94th minute made the final score line look closer than the game really was. 2-1 final score and Holland progressed on to a tricky quarter final tie with Brazil.

Whilst sat watching this match I couldnt help but think Holland’s 4-3-3 system would be one that could be adopted by, and naturally suit England.

For Holland, the 4-3-3 system naturally accommodates their gifted wide players such as Robben, Kuyt and Affellay. It also allows for a strong centre midfield set up which is built around attacking players like as Sneijder and Van der Vaart, and players that can provide defensive options such as De Jong and Van Bommel. With Robin Van Persie leading the forward line, they have ample attacking threat through the aforementioned players; but also fluidity to provide a strong defensive unit and a system that can easily revert to a 4-5-1 if and when required.

In England, we have a number of talented players that could cover the various roles required in a central midfield three (Gerrard, Lampard, Wilshere, Parker, Jones, Carrick etc); and we have an emergence of natural wide players with potential (players like Adam Johnson, Ashley Young, Theo Walcott and James Milner). With a number of decent full backs with attacking abilities in the set up as well (Ashley Cole, Leighton Baines, Kyle Walker, Glen Johnson), it’s a system that I feel could really be utilised to England’s advantage. Certainly from an attacking perspective anyway – and in situations where the opposition set up with 10 men behind the ball, this formation would provide England with more natural width and more options to play the forward pass.

Having three players in more advanced positions (two of whom tend to be natural wide players) should apply more pressure on the opposition back four, and inparticular the full backs. If played correctly it’s almost as if the opposition full backs get pinned in more than they would if they were facing a front two. With three in central midfield, playing as a triangle, and with full backs that can push higher up the pitch, there are more forward passing options than in a regular 4-4-2. The three in central midfield can, or should rotate positioning to create space and opportunites for the forward pass. If you play against a midfield four you should be able to work the numerical advantage in your favour, which should lead to more incisive attacking play. In contrast in defensive situations you can consolidate the space in central midfield and still provide cover to the back four.

Anyway some food for thought, and if I was England manager……

The Oranje Army for shh-urre….