Arriving in Buenos Aires only 6 hours before kickoff is somewhat an interesting experience. 16 hours from the UK on a night flight full of screaming kids hits you no doubt, but I have to say this fixture works better than any energy drink or other form of livener I’ve tried anyway.

To put this into context, Argentina as a country has long been on my list to visit, not least for the quality of the beef. For me, it has always had a mystique about it. As a frustrated lower league fan in the UK, I have over the years become increasingly disenchanted with the endless reams of yellow ‘breaking news’ tape served up in front of my telebox telling me something inane such as ‘Wayne Rooney finished training early today because he had to take his cat to the vet’.

I started to travel to watch a number of European fixtures to get away from the drivel of the Premier League and the Hollywood storylines created to try and make Wigan v Norwich appear a‘ Massive Game’. With this in mind I was desperate to get South America ticked off so I took off with my Dad for a 10 day trip taking in six games as part of the experience.

The Primera League also has Hollywood elements to it; 24 hour coverage, yes; ex pro’s as pundits who can barely string a sentence together, yes; and a round of league fixtures split over five days meaning the Argentinean media can digest every throw in. However with 12 of the 18 top flight clubs based in Buenos Aires (state and city) your always in luck of catching a game.

Rant over. Those interested followers will be aware that Argentina has a significant hooligan problem so foreigners (especially non Spanish speaking ones) are encouraged to use an agency to ensure you get into and out of grounds safely as well as have a local guide fill you in about the politics of the game in question. We used Tangol, a local agency run by a guy call Lucas who is a huge River Plate fan who will arrange everything for you.

Santiago was our guide, and picked up in a mini bus we stopped at what seemed like every hotel in Buenos Aires to pick up other European and North American tourist.

With their grounds less than half a mile from one another, there is added importance to this one as the pride of South Buenos Aires is at stake.

Santiago is a man of his word and having parked up nearby we safely made it to our seats in the upper tier of the family stand. 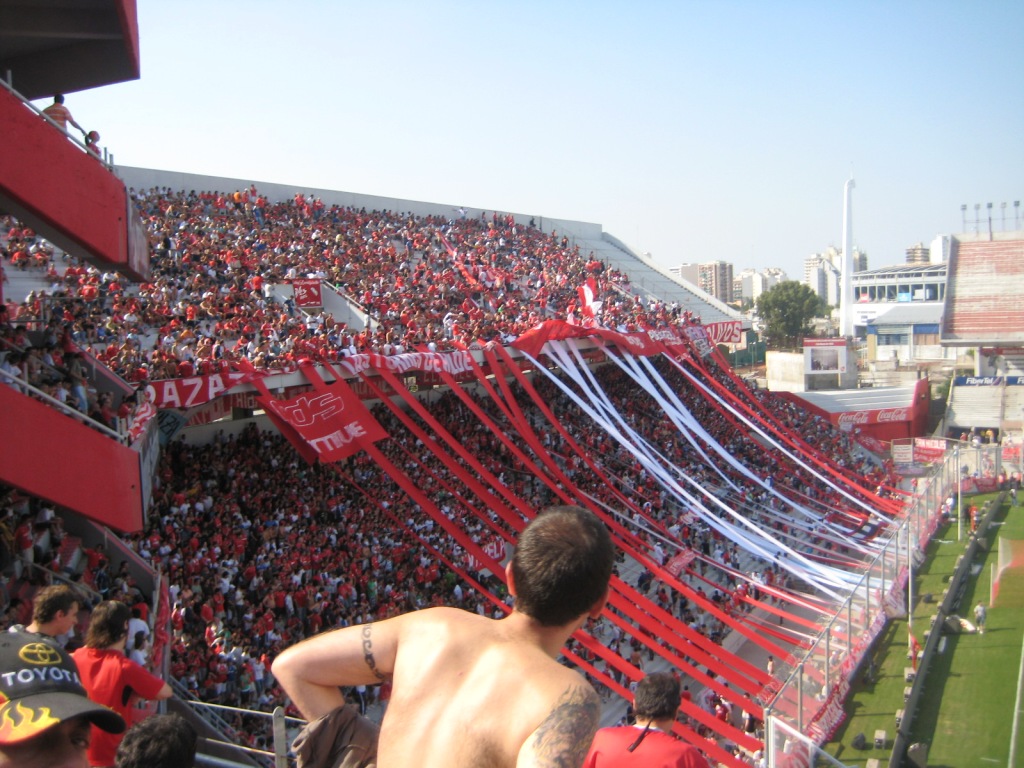 Pre game there were a number of displays and a strange but interesting act with red and white umbrellas parading throughout the Bora Bora’s end. 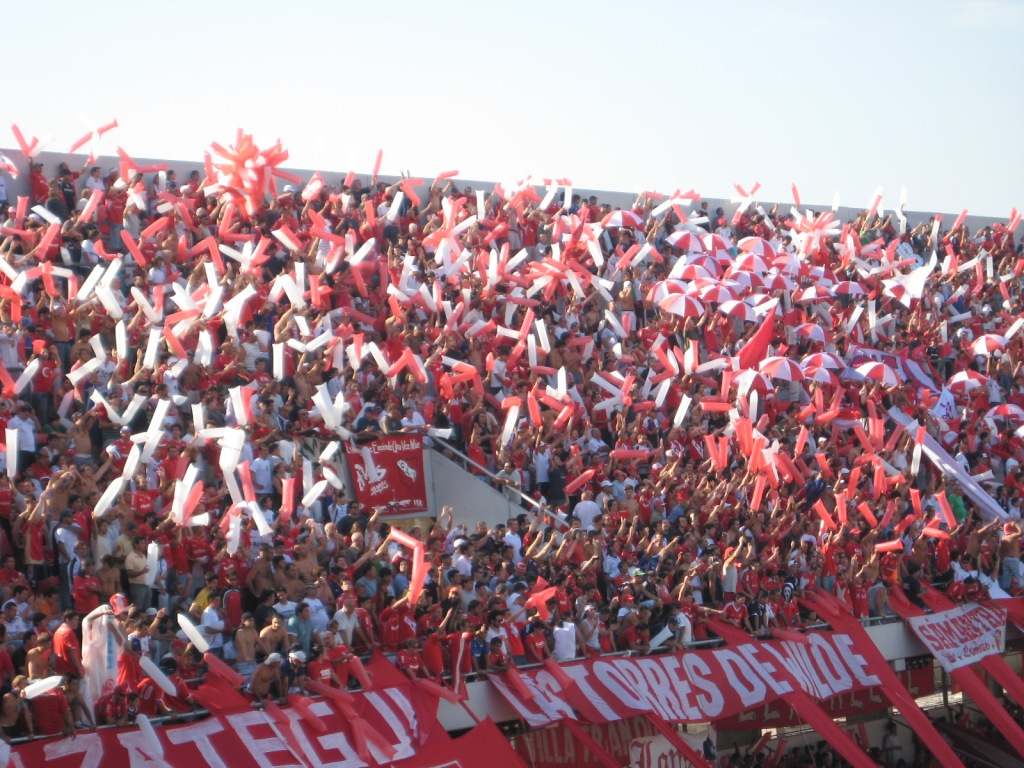 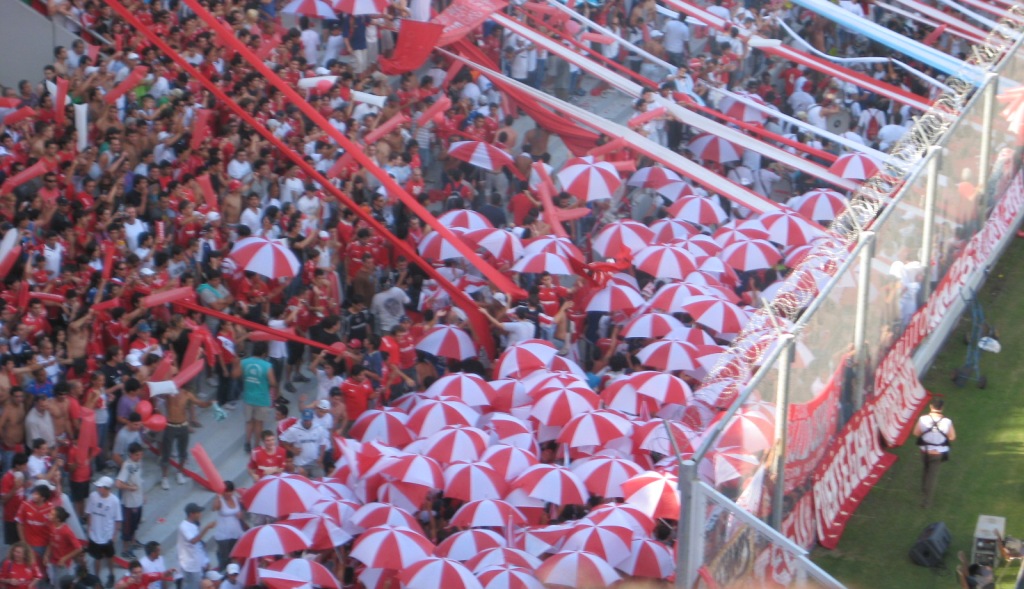 Are these guy’s ice cream sellers?…..

The players arrive; Independiente smoke out the Racing fans in the upper tier….

Chatting away to Santiago, it became clear about the difficult times Independiente have faced recently and they openly refer to the sale of Sergio ‘ Kun’ Aguero to Atletico Madrid in 2007 as saving the club.

The ‘surfer’ flag pictured below was made by the Independiente Bora Bora thanking Aguero and dedicating the purchase and redevelopment of the stadium to him……that’s a flag I can’t imagine is allowed into newly built out of town soulless grounds  in the UK.

The game itself was largely dominated by Independiente, certainly in terms of chances. This aside I saw something I’ve never seen before at a game. The referee has a spray can in his belt, and it was after 5 minutes when Independiente had a freekick deep inside the Racing half that I saw him do two very simple things which I felt was genius.

The ball was placed and he sprayed around the circumference of the ball, paced out 10 yards and sprayed a line about 2 to 3 metres in width. Totally confused at this point, the free kick took place, nothing came of it but i noticed two things. Firstly the ball remaining in the circle/the wall remained on the line and secondly as play moved on, I looked back to see the line and circle fading…..looked back again a minute later and it had disappeared.

Wow, that’s genius, the attacker can’t cheat by sneakily throwing the ball forward a couple yards, and the wall cant get away with shuffling forward a few yards which is all too common in Europe. Santiago didn’t really share my enthusiasm on this subject I must add.

A first half penalty was enough to win this one, with a cool finish tucked to the left by David Gandin. We did manage to see two red’s in this game as Racing hacked around in the second half. The Racing number 10; Hauche got a straight red for a naughty lunge on the hour. I think the right back is still rolling now. Independiente substitute Rodriguez got booked twice in seven minutes. Interestingly 22 Argentinian players lined up for this one.

With the game over, helicopters by pass the ground, and off go the hooters. You can leave now. (53 minutes after the final whistle).