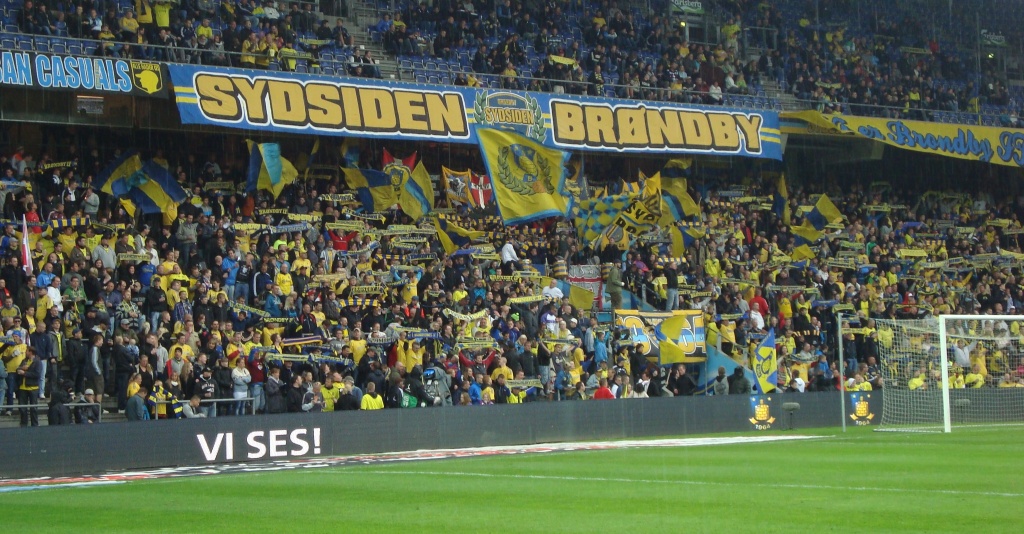 I would like to thank Brøndby fan Andreas for providing the  informative section of this post including the background of the club and its famous supporters!…Forza Brøndby!!

Initially billed as a romantic weekend away in Scandinavia with my other half – I somehow managed to sneak in two games in two different countries in two days! First up was Brøndby v AC Horsens in the Danish ‘Superliga’ on the Sunday; and then Malmo v IFK Goteborg in the Swedish ‘Allsvenskan’ on the Monday night.

With three top flight clubs (Brøndby, FC Copenhagen and Lyngby) and 12 lower league clubs (yes 12!…check out http://www.footiemap.com) there’s always a game or two to catch in the city. It just depends how far you can push the boundaries if you happen to be there with your other half! If you’re there with your mates – fill your boots!

I had visited Copenhagen some 6 years previous for England’s international friendly humiliation (click here) but this time I was looking forward to taking in some domestic football with no real emotional ties.

The Brøndby Stadium – is a fairly new ground with a 29,000 capacity – and is located in the Greater Copenhagen area of the city. It’s not that easy to get to, and I was advised to catch an ‘S-Tog’ (local train) to Brøndbyoster station, and the ground is about 25 minute walk from there. Located in a quiet residential area, you will be able to follow other fans on the day or ask for directions if you get stuck as most Danes speak great English! Taking this route you will need to allow at least 45-50 minutes to get to the ground from the city centre.

The grey metallic exterior of the Brøndby Stadion…..

If you approach the stadium from Brøndbyoster station you will eventually turn right on to a road called ‘Park Alle’ and after crossing the motorway turn left onto a small road called ‘Gammell Kirkevej’. Down this road (or side street) and as you approach the ground, you will notice a small bar on the left called the “Hytten” (meaning ‘cottage’ or ‘shelter’).

This is a colourful supporter’s bar – clearly defined by the “Hytten” graffiti on the exterior – and is a good place to meet the home fans and have a drink before the game.

Ironically I had met a Brøndby season ticket holder called Andreas the week before whilst out in Belgrade at an OFK Belgrade game, and had pre-arranged to meet him in the Hytten for a pre match beer.

Brøndby has a very proud history, but has fallen into decline in recent years – financial problems, poor management, regular sacking of coaches and directors, and almost weekly displays of hooliganism – just some of the problems collectively facing the club.

Back in the 90’s though, Brøndby dominated Danish football, with numerous league and cup titles, as well as some successful runs in Europe including the Champions’ League group stage in ’98 which included a 2-1 victory over Bayern Munich; semi-final and quarter-final appearances in the UEFA Cup in 1991-2 and 1996-97 seasons respectively (where 5-0 hammerings of German sides Eintract Frankfurt and Karlsuhe were dished out en route). Andreas also proudly recall’s Brondby’s aggregate win against Liverpool in the 1995-96 UEFA Cup and their thrilling win at Anfield!

The club has traditionally had strong representation in the Danish national team with notable players such as Michael Laudrup, Peter Schmeichel, John Jensen and Daniel Agger coming through the ranks.

However, the club is now in a poor condition. The team hasn’t won a Danish league title since 2006 when Michael Laudrup was the head coach; and now is more often fighting against relegation instead of fighting for titles. The club’s very existence has been constantly threatened in recent years due to their ongoing financial problems.

The Brondby supporters however have shown great dedication during tough times. The supporter scene in Brøndby has always been leading in Denmark, and although the average gate has suffered (average of approx. 10,000) the backbone of the fan culture is still strong. Ironically the supporters can be considered Brøndbys strongest and weakest asset. Too many times, troubles inside and outside the stadium have created bad publicity, and fines and sanctions from the Danish Football Federation.

The clubs ultras are located at the only non-seated section of the stadium. This stand used to be nick-named “Faxe” after the previous beer sponsor of the stand. That nickname is also shared by one of the club legends John “Faxe” Jensen, who played for the club before and after his 97 game spell for Arsenal in the mid 90’s. After the club changed the beer-provider from Faxe to Carlsberg, the name of the stand was changed to Sydsiden (South-side).

The ‘Faxe’ or Sydsiden Tribune…

The most predominant ultras group in the stand is ‘Alpha’. This group is very active in visual and vocal support, and even though they have a weakness for pyrotechnics they still try to maintain a good relationship to the club. Alpha and other groups such as ‘Suburban Baby Crew’ and ‘Supras’ are mostly associated with the positive part of the fan-scene, whereas other groups like ‘Southside United’ and ‘Suburban Casuals’ show more activity when there’s a chance to end up in a good old fashioned brawl with fierce city rivals FC Copenhagen.

Andreas explained that as this game was an end of season mid table non entity, that the atmosphere wouldn’t be as ‘good’ as normal. Despite the warning, I was still impressed with the Brøndby fans that day – a sea of blue and yellow and nonstop chanting provided more excitement than the game itself. I would love to re-visit for the Copenhagen derby – that is supposed to be something else.

Picking up tickets for Brøndby games is fairly straightforward, perhaps the only exception being the derby against FCK. They have an online ticket portal for pre-match day sales; but there are no problems buying them on the day from the ticket kiosks situated close to the Sydsiden end, or at the turnstiles themselves.

On the corner of the Sydsiden and Loxam Tribunes there is a large ‘player of the year’ plaque depicting names of Brøndby greats of yesteryear, a quick scan through the list and many famous Danes have worn the blue and yellow including: Michael Laudrup, John Jensen, Lars Olsen, Kim Vilfort, Brian Laudrup, Peter Schmeichel, Ebbe Sand to name drop a few.

For this game most of the ground was sparsely filled with the exception of the ‘Sydsiden Tribunen’ which houses the ultras. The AC Horsens section had a small travelling contingent of no more than 75 that were dotted across the away section.

The 75 or so AC Horsens hard core…

As the Brøndby players were warming up I noticed an unusual routine that was developing between the players and the ultras in the Sydsiden Tribunen. It was as if the ultras would start a chant, and that gave a signal to a certain player in the team, who would then break away from the warm up, run over to the Sydsiden to applaud the ultras and take their praise, and then return and slot back into the team warm up. Then another chant would start and another player would repeat the process!

True to Andreas predictions, the game itself was pretty uneventful, and was made even worse by the miserable wet conditions and lack of goalmouth action. Like the conditions, the game was a bit of a damp squib and fizzled out to a 0-0 draw. The opposite can be said though of the Sydsiden Ultras who put on a decent show and made the Brøndby matchday experience a memorable and worthwhile one from my point of view. Pencil me in for a derby visit one day!

The picturesque and colorful Nyhavn harbour area in central Copenhagen…