You can’t beat the excitement and anticipation ahead of a new international qualifying campaign. And ahead of the 2014 World Cup qualification draw in Brazil fellow England fan Mark and I began the usual pre-draw discussion around where we’d like to go on our next set of England adventures.

Places like Iceland, Faroe Islands, Armenia often crop up in such conversations, but one country that was always up there on both our lists was Moldova. So much so that we’d even talked through our proposed route into the country should the draw throw up this destination! Fly to Bucharest and then take the overnight sleeper train into Moldova to the capital Chisinau would be the route of preferred choice!

On 30th July 2011 the World Cup qualifying draw was made, and a few familiar England opponents from recent campaigns popped out of FIFA’s plastic balls, namely Ukraine, Poland and Montenegro – but for us the jewels’ in the crown of Group H were without doubt San Marino and as luck would have it Moldova!

As a fairly dedicated England fan over recent years you feel like you’re always planning (and paying) for your next England away trip. To get anything like a reasonably cheap flight you ideally need to be booking 6-9 months in advance, and in some cases even longer than that.

Thanks to a tip off from a fellow England fan on the FA’s forum, we booked our return flights to Bucharest early with a company I’d never heard of before – Blue Air. They give Ryan Air a run for there money but that’s another story. A £90 return flight was enough for me to be persuaded.

Despite being in the 21st century, obtaining two return sleeper tickets in a 2-berth cabin proved somewhat challenging. With no internet sales or online payment facility you need to engage in a spot of email tennis with a Romanian company called Wasteels. With delayed responses and cloudy information we were eventually offered 2 beds in a 4 berth cabin to Chisinau. The request to email a random Romanian my full credit card details, coupled with my snobbery and unwillingness to share a cabin with 2 other complete strangers led to our decision to shell out a few quid more and book two return flights from Bucharest – Chisinau instead!

The plus side was it saved us about 13 hours travel time (each way), but that meant we’d now end up getting 2 extra days in Chisinau than we’d planned!

The journey out to Chisinau was fairly straightforward. We had a good few hours to kill in Bucharest, so hopped on the airport bus into the city centre. We stopped by one of the main sights – the Romanian parliament building (see below) – which is absolutely huge, and then preceded to the off licence to purchase some cold beers to enjoy some al fresco drinks on a small grassed area opposite the parliament building and in the 33C sunshine.

By the time we arrived in Chisinau at 9pm we were fairly ‘loose’ and engaged in a bit of taxi haggling in the arrivals hall. Negotiating what seemed like a better deal from one particular company (it was about 50 Leu cheaper) it dawned on us that we’d probably negotiated ourselves nothing more than a £2 discount!

Jumping into the taxi – sorry 1970’s Lada – we left the airport to be greeted by unlit dark country lanes – slightly unusual for a capital city! After a somewhat sobering cab journey we arrived about 20 minutes later at our hotel.

On the whole Chisinau is a fairly typical eastern bloc city, lots of grey high rise tower blocks, crumbling roads and a general feel that has lead to Moldova gaining the tag as the poorest country in Europe.

The view over Chisinau from our hotel…

Having said that – the city does have its highlights though, and our Friday morning stroll into the city centre from our hotel along ‘Bulevardul Stefan Cel mare si Sfint’ you take in a few

city parks and some of the key sights including: Stefan cel Mare (central park), the Triumphal Arch and Nativity Cathedral, and The Great National Assembly Square.

After a swift walk around the city centre and a short stop off to pick up our match tickets we realised we had about 9 hours to kill before the 21.45 kick off! The inevitable Chisinau bar crawl was knocking at the door and so we ventured into our first bar of many that afternoon. On the whole beer and food prices here are ridiculously cheap, £1 a pint in most places and not a whole lot more for spirits too. The novelty of being in a foreign country where the pound sterling is so strong never wears thin and we knew we were in for a decent pre-match drink!

The Zimbru Stadium is located quite some way out of town and our bar crawl took us approx ¾ of the way there. Our last stop off was in a small bar in what appeared to be a high rise council estate. Inside we were ordering toffee flavoured shots for all inside and that seemed to endear us to the locals, if not allow us a more comfortable stay than had we walked in sober!

Having already polished off a lorry load of beers and shots we stumbled outside to try and find a cab. As we stood at the roadside, within seconds a man in a car pulled up and told us to jump in. Being hammered of course we obliged! It turned out it wasn’t a cab, just a random bloke happy to pick some drunken English blokes at the side of a road!

Grateful for the lift and thankful for actually being dropped off at the Zimbru Stadium, we had time for a couple more beers that we probably didn’t really need.

The venue for this qualifier was the Zimbru Stadium – home of Moldovan domestic side FC Zimbru. It is one of the more modern stadiums in the country, and the Zimbru stadium is set to an impressive back drop of high rise flats.

In recent times Moldovan domestic football has been dominated by Zimbru’s closest rivals Sheriff Tiraspol who have won 11 of the last 12 domestic league titles – and that was after they were only formed in 1997! Sheriff Tiraspol are based in the forgotten land of Transnistria – a region that sees itself as an independent state – but that is unrecognised by anyone outside of it including Moldovans!

The small territory whilst internationally unrecognised remains an independent state and has its own government, police, postal system and currency. Visits to Transnistria are best arranged through an organised tour company – as there are visitor restrictions and strict border controls. Although we didn’t get to visit it, the trip came highly recommended from fans that we spoke to that had gone.

Aside from the top 3 or 4 domestic club sides the infrastructure in the ‘Moldovan Nationala’ is basic to say the least. A quick look on Europlan-online website and you will see that most other grounds in the top flight resemble those that you would perhaps see in the 8th tier of English football! Check out the image below of F.C. Rapid Ghidighici’s ground – one of the smaller club teams from Chisinau and you’ll see what I mean:

Gaining access to the Zimbru Stadium was also a novelty. This was the first time I’ve accessed an away end by entering a gate at the home end! Due to the compact nature of the ground and the high rise residential blocks that are adjacent to it, there seemed to be only one main entrance for both sets of fans, and that is through the entrance gates situated on ‘Dacia Bulevardal’. 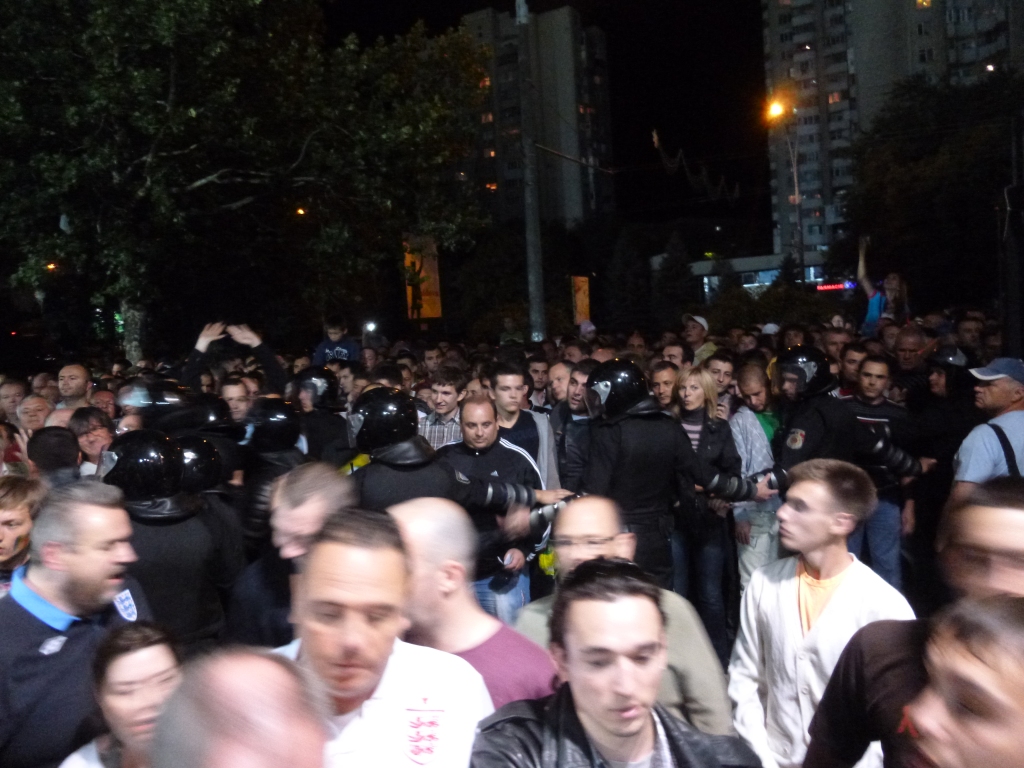 A tight squeeze – the main entrance into Zimbru Stadium…

The away end was at the opposite end of the ground to the entrance, and accessing it involved walking single file down a narrow tunnel underneath the main stand to get to the other end. Certainly one of the more unusual entrances to a stadium I have experienced, and there is absolutely no way this would have passed a health and safety check in the U.K that’s for sure! 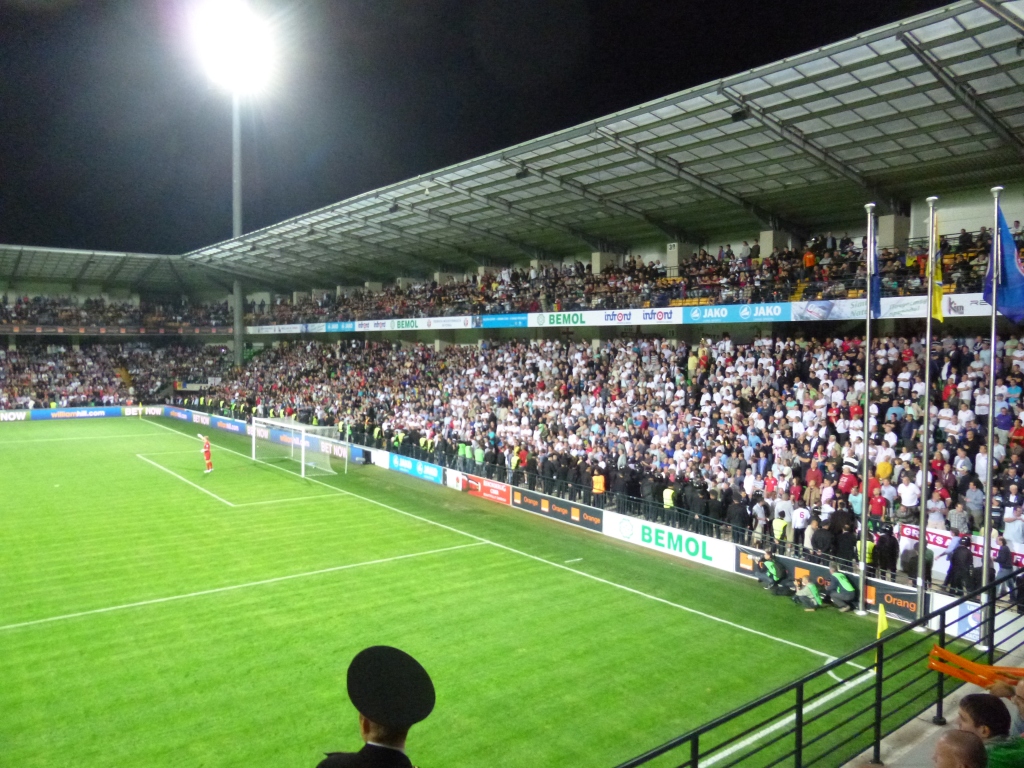 England produced a really dominant display and to be honest Moldova didn’t really get a look in for the whole game. An early goal from the penalty sport by Lampard on 3 minutes settled England down nicely, and it was effectively all over at half time as England cruised into a 3 nil lead. It was much more of the same in the second half and Moldova rarely threatened the England back line. 2 further goals from Milner and Baines wrapped up a convincing win for the three lions on the road. I had anticipated a much tougher test for England than what Moldova actually offered, but hey I’ll take a 5-0 away win any time!

If you’re ever out in Chisinau there are generally three main ‘out of town trips’ you can do:

1)    Visit the forgotten land of Transnistria

Orheiul Vechi is a cultural, historical and archaeological complex located about 35 miles north east of Chisinau. It is not easily reached by public transport, and it is advisable to book onto the trip with a local tour guide. That way you will be personally driven out to the site and it will save you loads of hassle.

Located around a valley shaped by the River Raut, Orheiul Vechi is a cave monastery complex carved into limestone cliffs set in an open landscape. The cave network itself was dug by orthodox monks in the 13th century and remained inhabited until the 18th century. Today only one monk remains, and whilst many visitors pass through this ancient site, the monk still lives in the complex and delivers sermon’s to small loyal gatherings.

It was slightly surreal – seeing an old man and all his belongings piled into one corner of the cave, whilst at the opposite side was a rather ornate looking altar from where he preached to his gathering. Even if you’re not religious, this trip is well worth taking in – if only for the bizarre nature of the monk’s existence and the opportunity to see rural life in Moldova.

It was on this particular trip that I first met aspiring football writer Iain Pearce who was embarking on an Eastern Europe / Russian football adventure at the time. It sounded like a trip of a lifetime, and Iain has kindly submitted many match articles from his experience to ‘Look at These Scenes’ – they are well worth checking out!

The hour or so drive to Orheiul Vechi takes you into rural Moldova and you can’t help but notice the primitive nature of life outside of the city here. In many ways it reminded me of my experience of Cuba – very much back to basics – simple one tier cottages and shacks with no obvious luxuries, limited utilities and of course livelihood such as chickens and goats just wandering round the entrances to most dwellings!

Its visits to places like this that makes you realise time seems to have stood still in some countries – even in 21st century Europe. A simple way of life, and a completely different set of problems to face compared to those in the rat race I’m accustomed to here in London. Its trips like this that makes following England away such a unique experience.