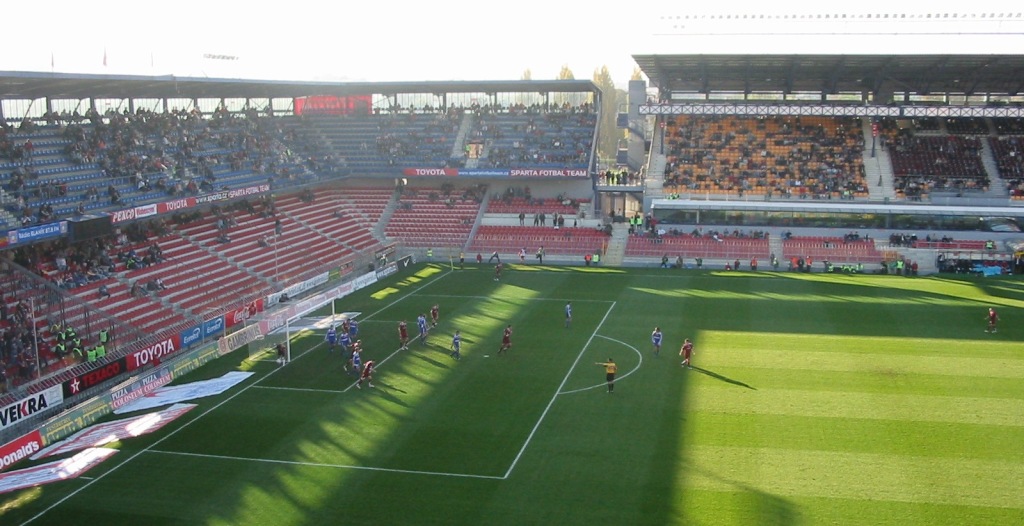 A trip down memory lane as guest writer Neal Underwood recalls a visit to a gem of an Eastern European football city – a place where you have a choice of four top flight clubs and match tickets and beer remain ridiculously cheap. You could do worse than a visit to Prague to quench your footballing thirst!…

It’s now more than eight years since my trip to watch Sparta Prague, but the experience still lives fresh in my memory. When I discovered we were heading to Prague for my mate Jeff’s stag do, almost the first thing I did aside from making travel plans was to check whether one of the Prague teams were at home that weekend.

With four top flight clubs based in the Czech capital – Slavia, Sparta, Dukla (of Half Man Half Biscuit fame) and Bohemians 1905 – you will be pretty much guaranteed at least one slice of Gambrinus Liga action on any given weekend visit to the city. If you venture into the 2nd division then the options increase further. We were in luck. Sparta were in league action against SK Sigma Olomouc on the Saturday afternoon.

Easyjet flew myself and fellow Chelsea fan Phil in their inimitable style from London to Prague on the Friday afternoon. After we’d checked into the cheap hotel near the Vltava River close to the city centre, we started to explore some of the local hostelries. We found that if you stayed away from the main tourist traps, not only was the beer very cheap but the locals were also very friendly. Jeff and the rest of the party flew in from Manchester a few hours later and we met up with them for an evening of everything Prague had to offer. It was a late one.

On the Saturday, following a fine cold meat buffet for breakfast, we found ourselves gravitating back to the Old Town Square (Staroměstské náměstí), where we parked ourselves outside a bar and watched the world go by. After much discussion only four of us – myself, Phil, Wolves fan Dave (who I have to thank for the photos which appear with this) and Pete, whose allegiance I have sadly forgotten in the mists of time – were up for going to the match. The rest planned a busy day of mostly drinking.

Being the cultured people we are, we set off across the picturesque Charles Bridge, which takes you over the river into Old Town and on to Prague’s historic castle. We had a stroll around the outside of the castle, then stopped in at a restaurant for some lunch. The goulash was very good, as was the Czech beer, a consistent theme of the weekend.

We’d looked on the map and realised Sparta’s ground was up in the North West of the city, in the Letna district. But laziness took over and rather than find out what train or bus we needed to catch we flagged down a taxi to take us there. I’m fairly confident he took the scenic route and ripped us off, but it was only a few Czech korunas each so we took it in our stride. Soon we were pulling up outside the Toyota Arena, home of Sparta Prague.

Impressive it was not. Everything had a run down, Eastern European feel about it. The club shop, or megastore as we immediately dubbed it, was a small stall outside the ground. Ever the flash Western Europeans, we queued up at the ticket office (see below) and asked for the most expensive seats in the house. They were the equivalent of £3 each. 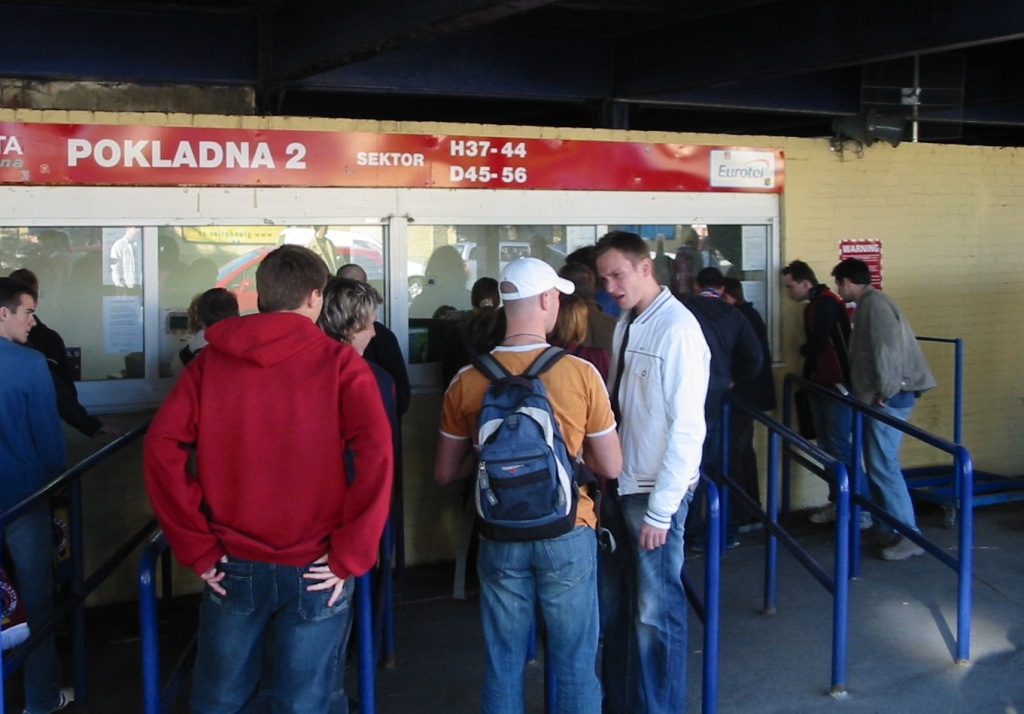 Although Sparta Prague are the most successful club in the Czech Republic, getting hold of tickets for most games isn’t a problem for overseas visitors (the exception being Champions League games). More often than not there are plenty of seats left over for the occasional football tourists to occupy.

With time before kick off, we went to bar outside the ground and sampled the local beers, which were available at a very reasonable 25p each!  We took our seats in the ground just before kickoff, and were located close to the away end which, although sparsely populated, was extremely vociferous. 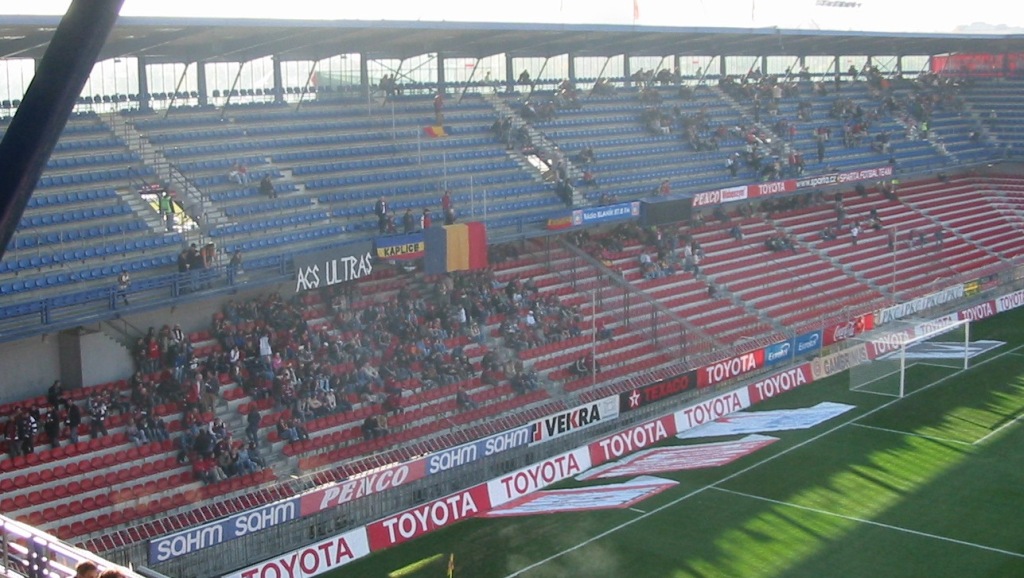 The Sparta Prague squad at that time included one Karel Poborsky, who had a relatively unsuccessful spell at Manchester United earlier in his career, as well as a young Michal Kadlec, now a Czech international plying his trade in Turkey with Fenerbahce. Goalkeeper Jaromir Blazek, who earlier in his career had also played for Slavia Prague, was also a full international, but was only ever destined to be number two behind Petr Cech. 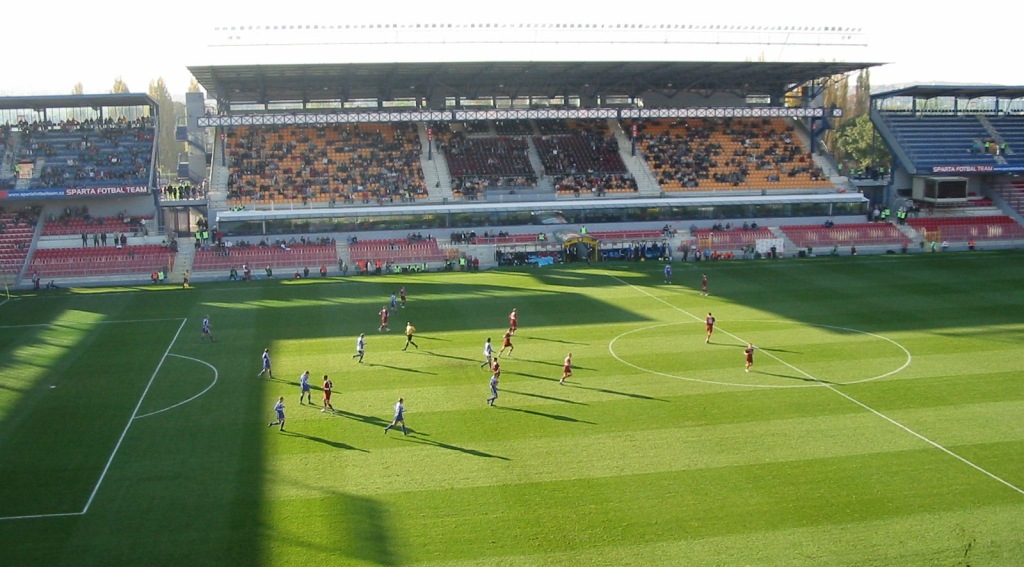 The match itself was fairly forgettable and hardly classic fair – it may be that Sparta’s players had one eye on their Champions League visit to Arsenal the following Wednesday. Olomouc’s fans continued to make a lot of noise all afternoon, particularly as they turned the form book on its head. Sparta were awarded a penalty which they duly converted (see below) but the away team emerged with a 2-1 win. Phil and I were also keeping tabs on the Chelsea v Blackburn score via texts from home (remember doing that?). After leading 2-0 we had been pegged back to 2-2 at half time as the Sparta game drew to a close.

We left the ground and decided a taxi back into the city was the best option. And when we got there we found the bar where we’d arranged to meet the others was showing the Chelsea v Blackburn game, so Phil and I took in the second half of what ended up being a 4-2 win for the Blues. The rest of the evening and the night? It ended up being more or less a carbon copy of Friday. I left Prague with a hangover and fond memories of my experience of Czech domestic football.