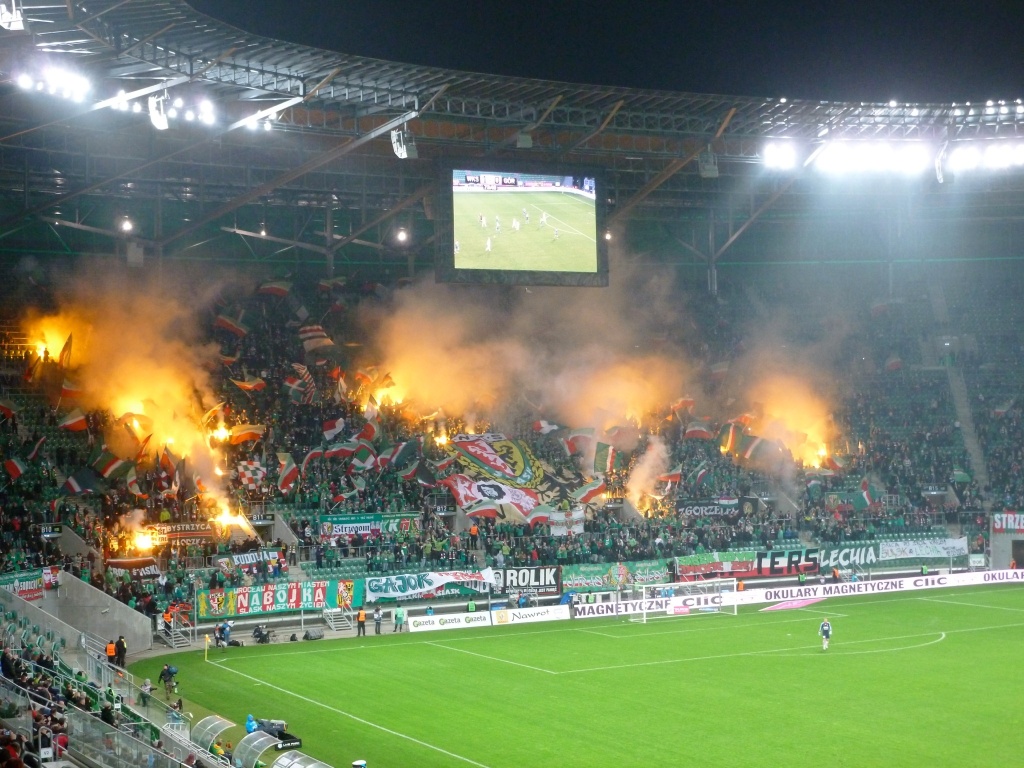 With fear of stating the obvious, football is nothing without the fans.

But for me there’s a key word missing from that sentence. ‘Passionate’. Football is nothing without passionate fans. It’s like buying a jam doughnut and then realizing there’s actually no jam in it – it’s only half the experience that it could have been! Ok that’s a poor analogy, but nowhere does this ring more true than in Wroclaw, Poland.

On first glance it looked like I could have an MK Dons experience on my hands. With hoards of empty seats 10 minutes before kick off I must admit I feared the worst and thought a soulless 90 minutes of football lied ahead of me. But my hastily made judgement couldn’t have been further off the mark, as I hadn’t reckoned for the Ultras Silesia, who despite a half empty stadium created a superb atmosphere and during the second half unveiled a memorable tifo display. 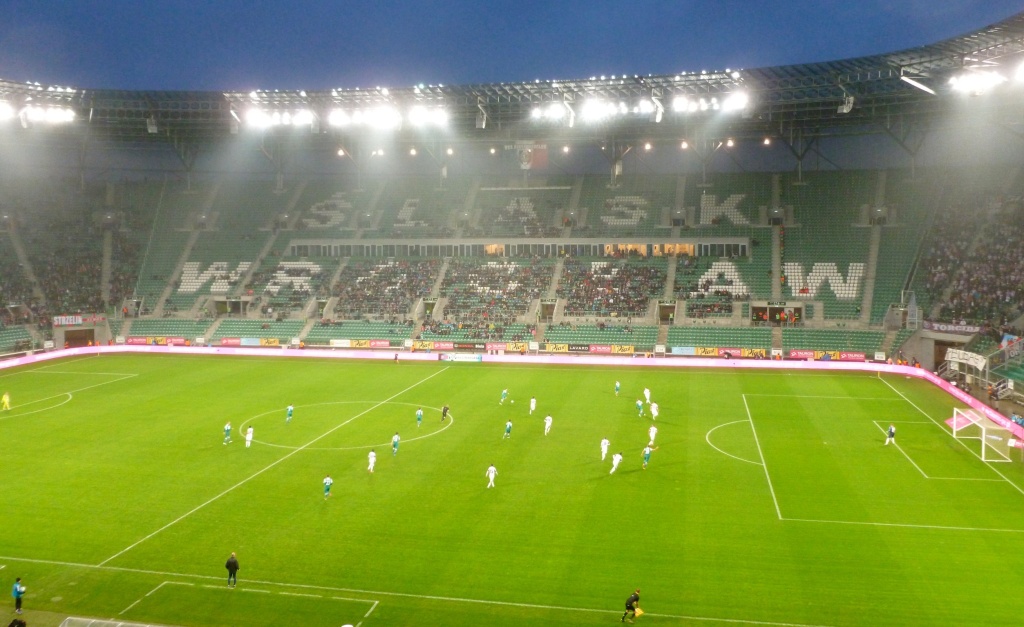 Śląsk Wrocław (pronounced Slonch-k Rots-wav) benefited from the Euro 2012 stadium investment funding and as a result of UEFA’s golden ticket, Śląsk have a brand new shiny all seater stadium. An impressive one tiered stadium holding 42,000, the Stadium Wroclaw is a truly magnificent football arena. However there is one major problem, the stadium is just far too big for Śląsk. 10,992 attended this match, that’s about 27% of the stadium capacity. That maybe worse than an average MK Dons home game perhaps, but the difference here is despite the hoards of empty seats in sections of the ground there’s one hell of an atmosphere and not the subdued experience you’d usually get at an MK Dons home game (sorry MK fans, I’ve experienced it!).

Build it, but they might not come. But if some do come, let’s hope they are Polish is what I say! 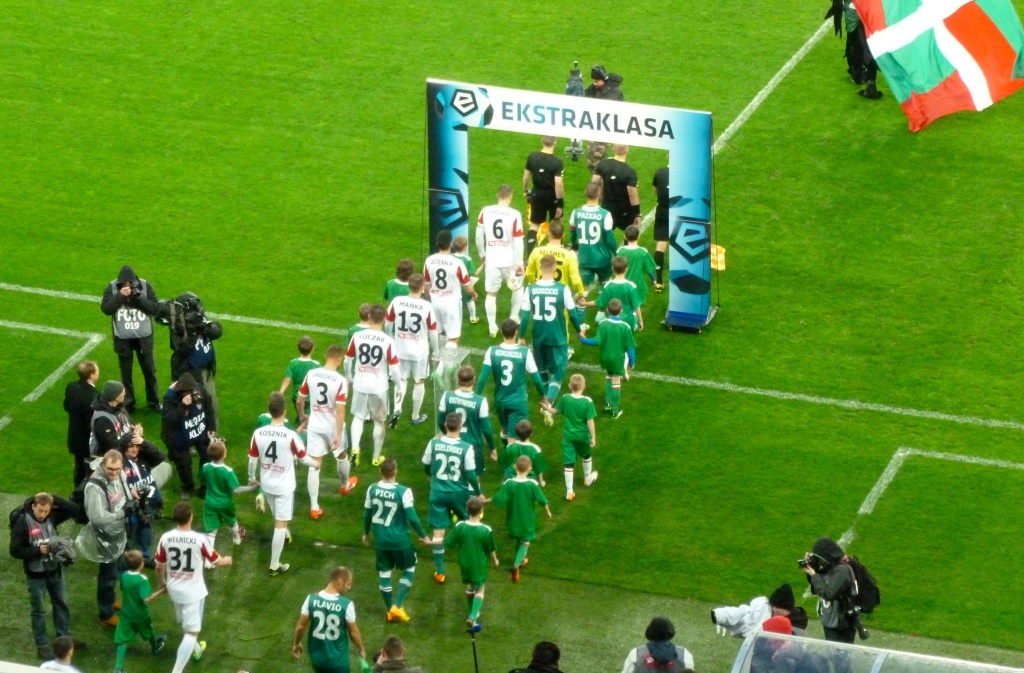 I’ve visited a few club matches now in Poland and each time I go I get a look of puzzlement from people that I meet who often say “You’re from England, why would you come here when you have the Premier League?” Well I’d swap the Premier League every time for a dose of the Ekstraklasa! Ok it’s not wall to wall world class names, and it doesn’t brain wash you into thinking it’s the best league in the world, but the games here are more often than not entertaining and more importantly the USP for me is the incredible supporters in this country. A more passionate and vocal set of supporters you will do well to find. Throw in ticket prices more akin to the Ryman League and you’re laughing!

£8 for one of the best seats in the house is ridiculous for football at this level. And if you take into consideration my return flight to Poland was £46 return, you’d still have some change left over from a ticket for an equivalent seat to watch West Ham v Stoke in the best league in the world. But I’d bet you’d take more from this experience than the plastic experience the Premier League often serves up.

Gornik Zarbze had a decent away contingent tucked away in the corner of Tribune X, a right noisy bunch that were in place well over an hour before kickoff. Their chants and exploding bangers and fire crackers could be heard from outside echoing around the empty stadium. The Ultras Silesia are housed in Tribune B and make up the largest concentration of Śląsk fans in the stadium. 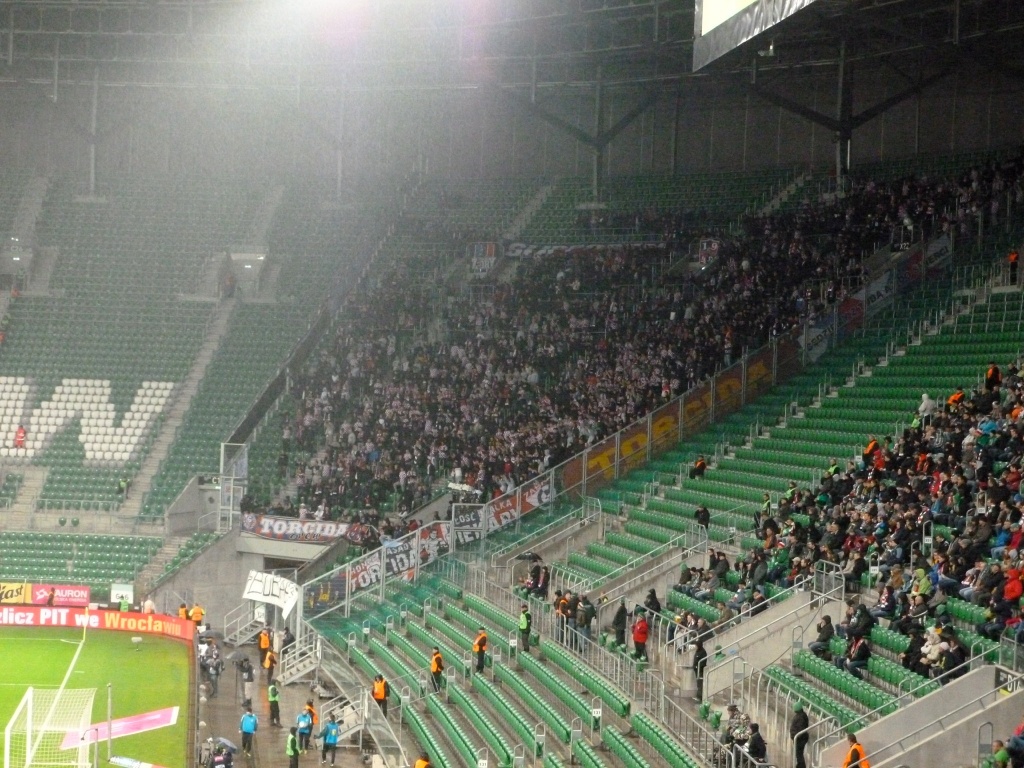 The Gornik Zabrze fans tucked away in Tribune X… 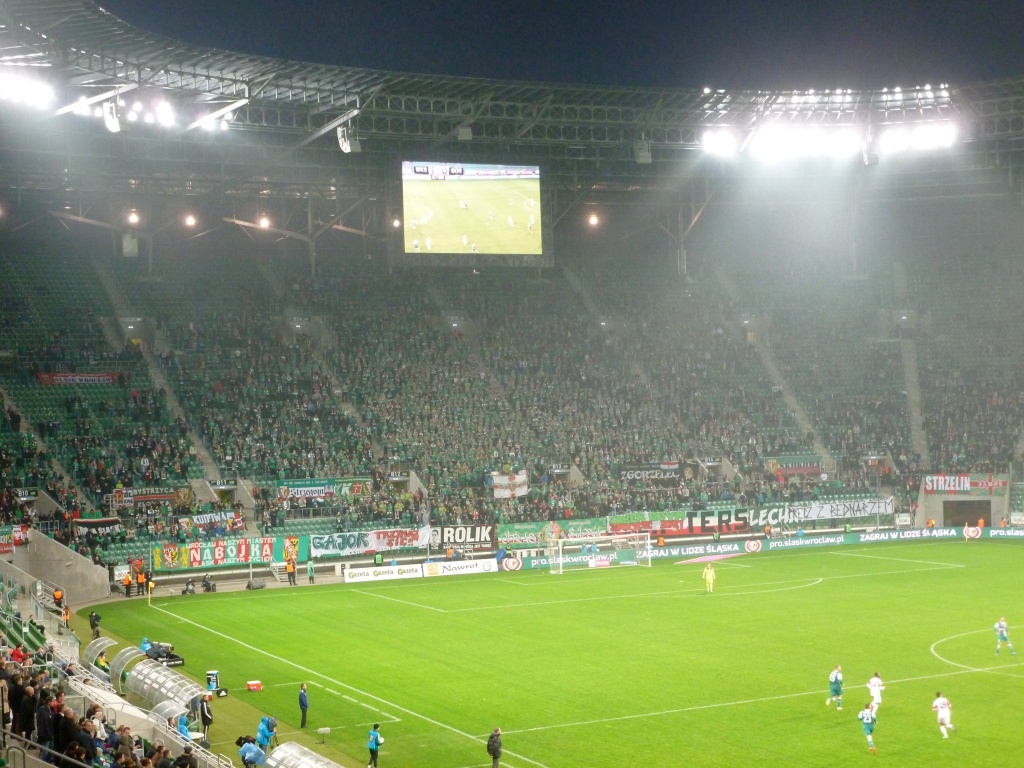 The Ultras Silesia in Tribune B…

A seat in Tribune A will provide you with excellent views of both sets of ultras and as already mentioned will cost you just 42zł (or £8). With the amount of empty seats in this section you can also freely move around between the upper and lower part of the tier as well as up and down the entire length of it if you so wished! 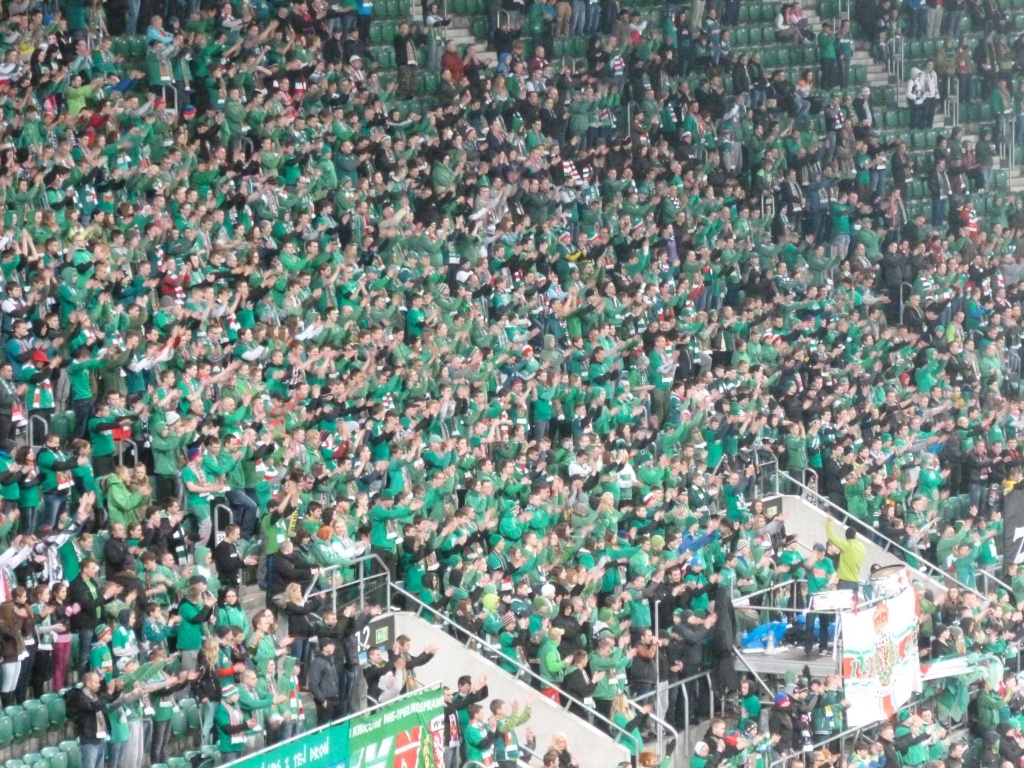 The Green Wall: The impressive Ultras Silesia expertly lead by the capo in a lighter shade of green!…

The Ultras Silesia were formed in 2008 and are linked in part to a former group that was known as UItras Śląsk. A sea of green stood behind the goal, the ultras were expertly orchestrated by a Capo dressed in a lighter shade. His energy and enthusiasm was incredible as he whipped the ultras into a frenzy. His instructions could be heard bellowing out from the microphone across the part empty stadium, and after a momentary silence on each instruction the “green wall” would then respond in unison and the noise from that end was impressive.

This coordinated approach amongst Ultras is commonplace on the continent, and although it perhaps lacks the spontaneity of humorous chants heard on the terraces of English football, the intensity and passion shown by the ultras is unquestionable and adds a real edge to games like this. As a player it must give you a bit of a buzz and an extra focus to play in front of a vociferous crowd like this.

Onto the game then, and both teams were in the middle of a horrendous run of league form. Śląsk, floundering near the bottom of the table, haven’t picked up a league win in eleven games, their last coming against Lechia Gdansk at the start of November 2013. Similarly Gornik Zabrze hadn’t picked up 3 points in the last 8 and hadn’t won on the road since October! Both teams had recently appointed new managers in an attempt to end the 3 point drought and steer the clubs to better times after the winter break.

Śląsk’s team included Tom Hateley, son of former Rangers and Milan legend Mark. Tom signed for Wrocław in September from League One side Tranmere Rovers. An unexpected move you might say, but this was the second British national I had seen playing in polish football in two days after watching Barry Douglas play for Lech Poznan the day before. It’s like the proverbial bus analogy, nothing for ages and then two come along at once!

If you’re interested in reading a bit more about Tom Hateley’s road to Wrocław there is an interesting article on the Rightbank Warsaw website, click here for a link to the article.

The most familiar name on the Gornik team sheet was their new manager, Robert Warzycha. Do you remember him from his Everton days? Warzycha had remarkably spent the previous 17 years out in the USA with MLS team Columbus Crew. During this time he was player, assistant manager and manager, before he was released from his contract in September 2013. 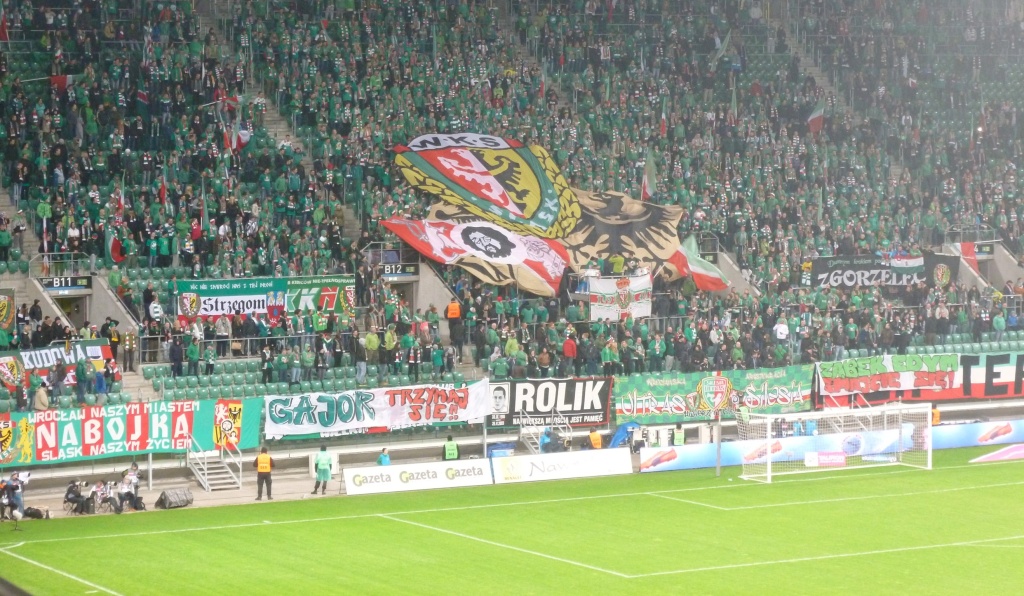 The first part of the 2nd half tifo is unveiled…

The flares start flickering into life… 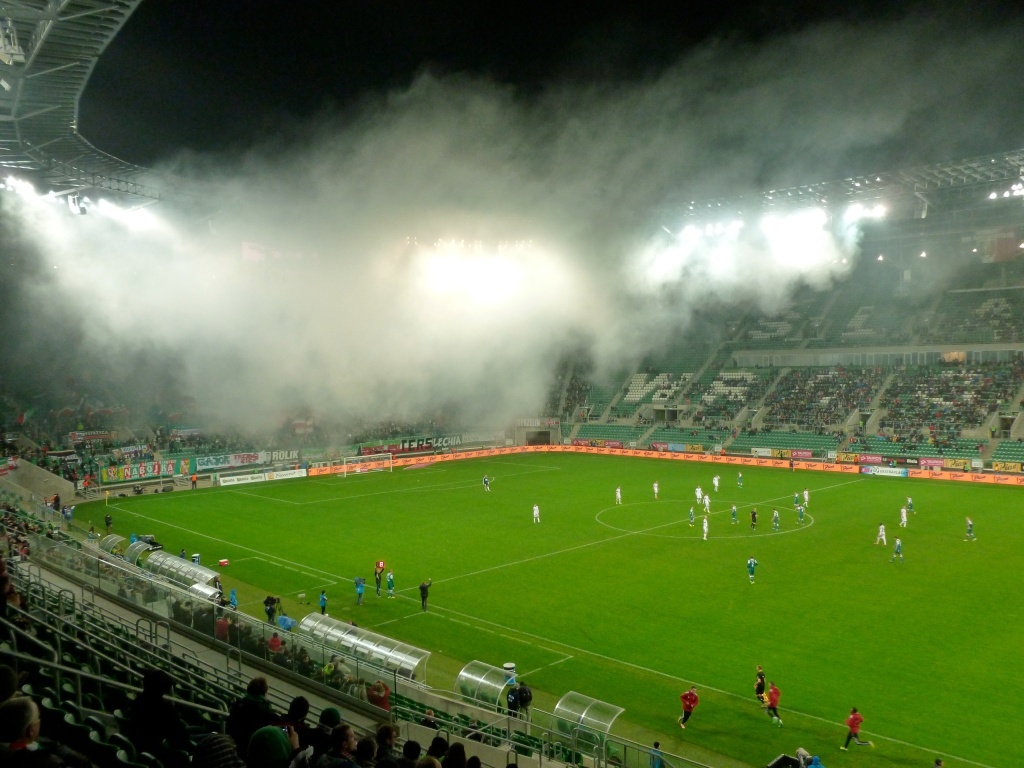 Smoke from the second half pyro display waft across the stadium….

The game itself was another open attacking game and based on possession and chances created, it was if the league table was upside down! Śląsk dominated the first half and deservedly took the lead on 25’ through Marco Paixao.

Unfortunately Slask missed a series of chances that would end up proving their undoing, as Gornik scored an equalizer in 80th minute. A well taken goal from Iwan, as he brilliantly chested down a far post cross, cut back inside the final defender and rifled a low shot into the far bottom corner. The game finished 1:1. On the weight of this performance Śląsk should be much further up the table, but not closing out games is now costing them valuable points, and their winless run continues.

Wrocław is a picturesque city that will often be overlooked by foreign city breakers, perhaps in favour of Warsaw or Krakow. But don’t let Poland’s bright lights draw you away from the Silesian capital – it’s a real gem. 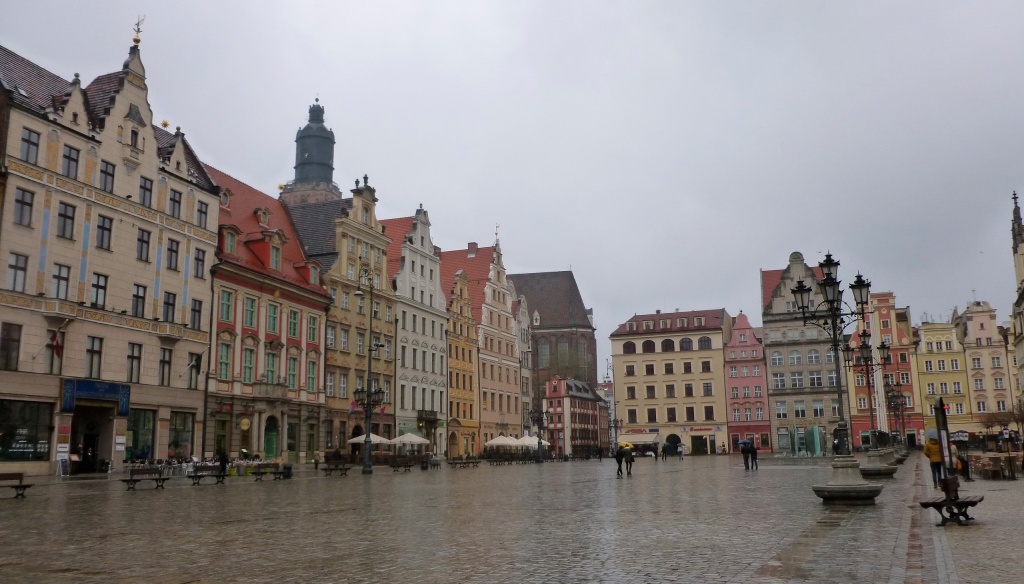 The Stary Rynek and Plac. Solny are the jewels in the city centres crown, but wander a bit further a field from the old town squares and the network of meandering river ways that wind their way through the centre make for an interesting city, easily explore-able on foot or by tram. 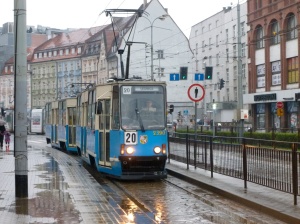 Talking of trams, it’s a great way to get about the city and the mixed bag of modern day trams or the retro ‘boneshaker’ trams make for an interesting ride. No’s 3, 10, 20 and 33 Plus will run you out to the stadium. From the city centre (Rynek or Galeria Dominikanska stops) it takes approx 25 minutes and costs just under 3zl (65p).

Club Shop: Rather surprisingly there is no club shop or any unofficial merchandise sellers for that matter at the stadium. There are a number of club merchandise outlets in the city centre so if you want to deck yourself in Śląsk gear make sure you do it before setting off to the stadium!

Tickets: tickets can easily be picked up from the ticket office located on the entrance way to the stadium from the tram stop. Your passport will be needed to get a ticket though so don’t forget it!

All in all an interesting experience, and I would definitely recommend visiting Śląsk Wrocław for one of the bigger games against Legia, Lech or Wisla. With cheap flights from London, give the Premier League a miss one weekend and try the Ekstraklasa. Go on, you won’t regret it! 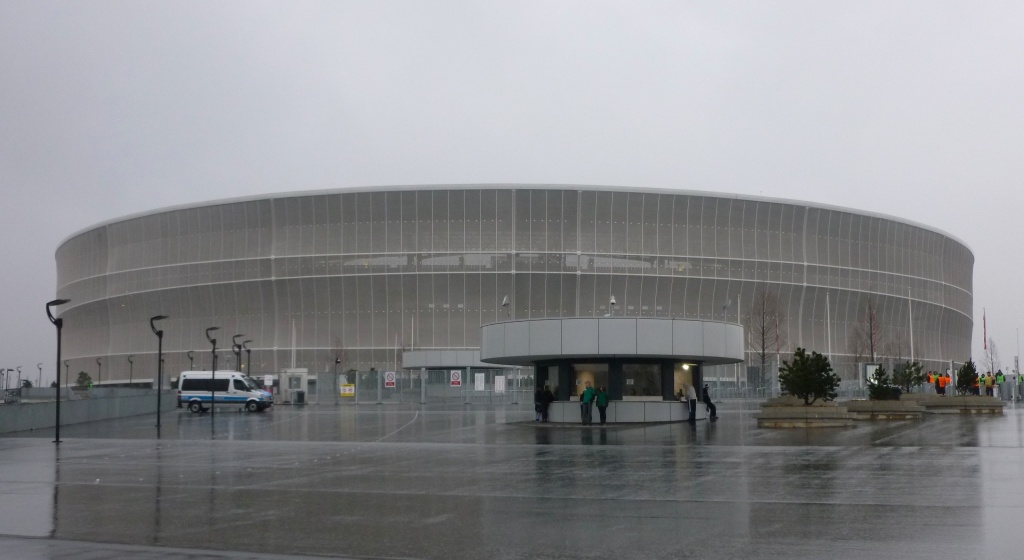