When it comes to football in Belgrade, and Serbia in general, Red Star and Partizan dominate. Partizan was the team of the army, named after the Communist Partizans who fought the Nazis in World War II. Red Star were formed in 1945 out of the war-time Serbian United Antifascist Youth League, and became closely associated with the Ministry of the Interior and more specifically the Secret Police. Ever since the two clubs’ formation the rivalry has been intense and during the existence of Yugoslavia, rivalries with the two Croatian giants Dinamo Zagreb, and Hajduk Split were also ferocious. In fact many attribute the riot on May 13, 1990 at Maksimir stadium in Zagreb during a match between Dinamo and Red Star, as being the spark that started the Croatian War of Independence that began a year and a half later.

The Belgrade derby runs a lot deeper than simply football. Other than similar rivalries in the clubs’ handball and basketball sections there appears to be an almost cultural element to it. The Red Star fans, or Delije (Hardmen or Heroes) base themselves on the European football Ultra, with banners and choreographed displays of banners and pyro, while the Partizan fans, the Grobari (Undertakers or Grave-Diggers) base themselves more on the British style of support in the form of loud and continuous singing. Mind you after this game the press reported that 150 flares were confiscated from the Grobari. Its been long since nicknamed “The Eternal Derby,” and with this being the 146th event it was not difficult to see why!

Partizan play at the Partizan Stadium which was known as the JNA (Yugoslav People’s Army) Stadium between 1951–1989 when the club bought it from the military. These days the conversion to all-seater has reduced the capacity from 50,000 to 32,710 and with no roof, the view to the north includes the dome of the Church of Saint Sava, the largest Orthodox Church in the World. Wherever the derby is played, the Delije always take the North end, with the Grobari the south. Partizan would like to move, the ground is smaller than their near neighbour’s 50,000 capacity Red Star Stadium, nicknamed the “Marakana.” However concrete plans to move have long since been shelved, neither club has any money and Red Star’s finances are so bad their participation in Europe is in major doubt, with players not being paid.

This fixture comes with a reputation for serious trouble and even with the amount of football I’ve watched over the years, I’ve seen nothing quite this intense. Even before taking the taxi out to FK Slavija that morning there were riot police in full body armour on the streets of Belgrade, and when I took the taxi out to the ground I kept a very low profile, to the extent that the external pictures were taken with my iPhone! The security check didn’t worry about my camera, of more concern were coins and cigarette lighters and I would imagine weapons and flares. I am indebted to ace blogger Stephen Carpenter of ‘The Chicken Balti Chronicles’ for securing tickets in the West Tribune, a “Safe” mixed section; it was clear that the Ultras at the ends would do their thing, while the mixed tribune was allowed slightly more relaxed policing.

I was in place over an hour before kick-off and even then the atmosphere was crackling as both sets of fans supported their team and insulted the opposition. The Delije fans who bought tickets for the Eastern Tribune scaled the fences to join their comrades in the North, before setting off flares, and producing a huge tank banner, and then a balloon display as the teams came out. Not to be out-done the Grobari created a cacophony at the southern end, and flew stolen Delije banners upside-down before burning them. Some fans even climbed on top of the huge video-screen to insult the Red Star fans in semaphore!

It was certainly passionate, crazy even, but I always felt safe. Maybe that’s the benefit visiting a lot of grounds over the years, and maybe a little luck. I’ve certainly not seen the like before, the AIK vs Djugårdens derby at the old Råsunda would be the closest I witnessed, and I was utterly exhausted at the end. I got the impression that the atmosphere would have been exactly the same if the game had been poor, I was fortunate though to have witnessed a classic, and that’s not a term I use lightly. 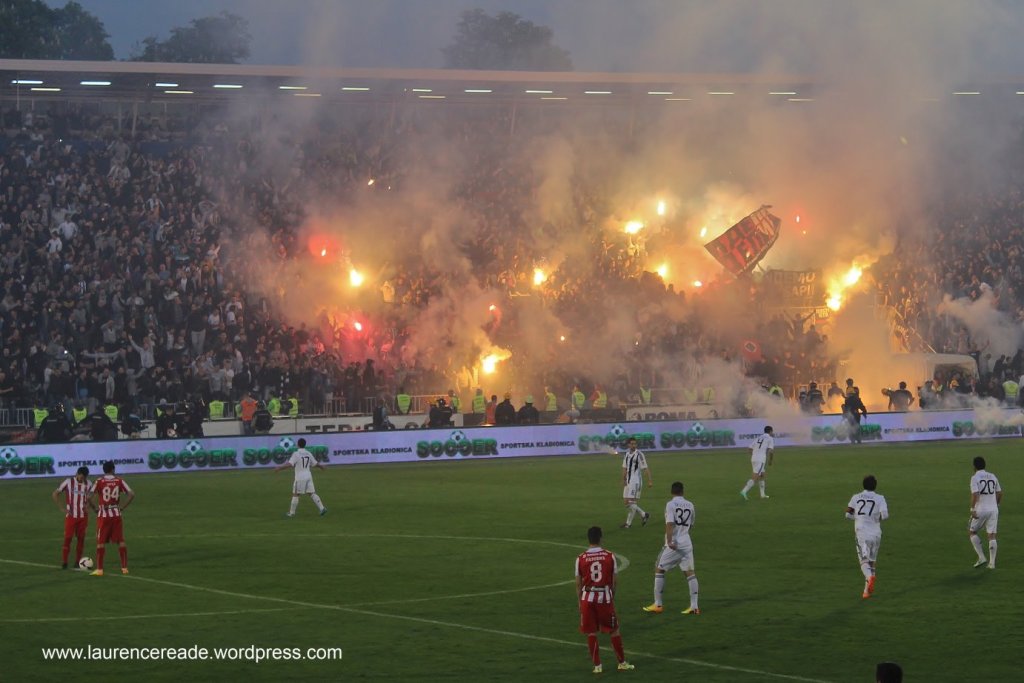 It started slowly, perhaps with Red Star being top of the league, 6 points clear of second placed Partizan with only 5 games left, they didn’t feel the need to take too many risks. The pace gradually increased and everything changed when the league’s top scorer Dragan Mrda was hauled down for an obvious Red Star penalty. However Miloš Ninković’s penalty was well saved by Milan Lukač and two minutes later three-quarters of the stadium went mad when Nikola Drinčić’s devilishly curling free-kick from twenty yards out sailed past fellow Montenegran Boban Bajković in the Red Star goal.

Once again Red Star gained a penalty through Mrda, this time Branislav Trajković was guilty of the trip a little less obvious than the first. This time the responsibility was given to Red Star captain Nikola Mijailović but his penalty was a carbon-copy of the first, with precisely the same result.

Perhaps Mrda had grown tired of his teammates spurning chances he’d created, but he equalised in the 56th minute after he picked up a loose ball on the edge of the penalty box, rode a weak challenge before casually stroking home. The Delije went mad, and a flare was thrown singeing Red Star midfielder Darko Lazović’s shirt in the process. 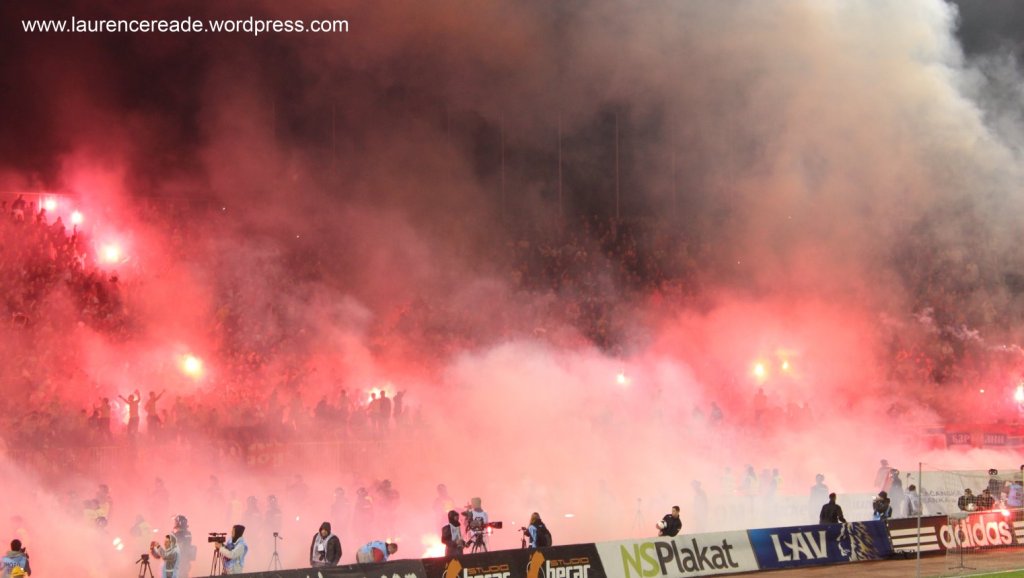 A draw was good enough to all but put the title beyond Partizan’s reach and as the game wore on, Red Star’s tactics began to get more negative. Partizan threw on forward Nemanja Kojić, the ruse worked but it took Red Star’s Dragan Mrda to change from hero to villan to do it. In stoppage time he dawdled on the half-way line, was dispossessed, and threw himself to the floor in a vain attempt to get a free kick. He was still sat there when seconds later Miroslav Vulićević’s cross found Kojić at the back post and he was able to twist and turn the ball past Bajković.

The win I suspect won’t stop Red Star taking the title, perhaps this was a case of Partizan winning the battle but not the footballing war. On the final whistle, the Red Star fans in my tribune quickly disappeared, and I soon followed them as the stadium erupted with noise and flares. It wasn’t difficult to get a taxi back to Slavija Square and as I alighted the riot police looked at me nervously. In truth I was glad of their presence.

You can read more articles from Laurence’s football travels by visiting his website: ‘Football: Wherever It May Be’