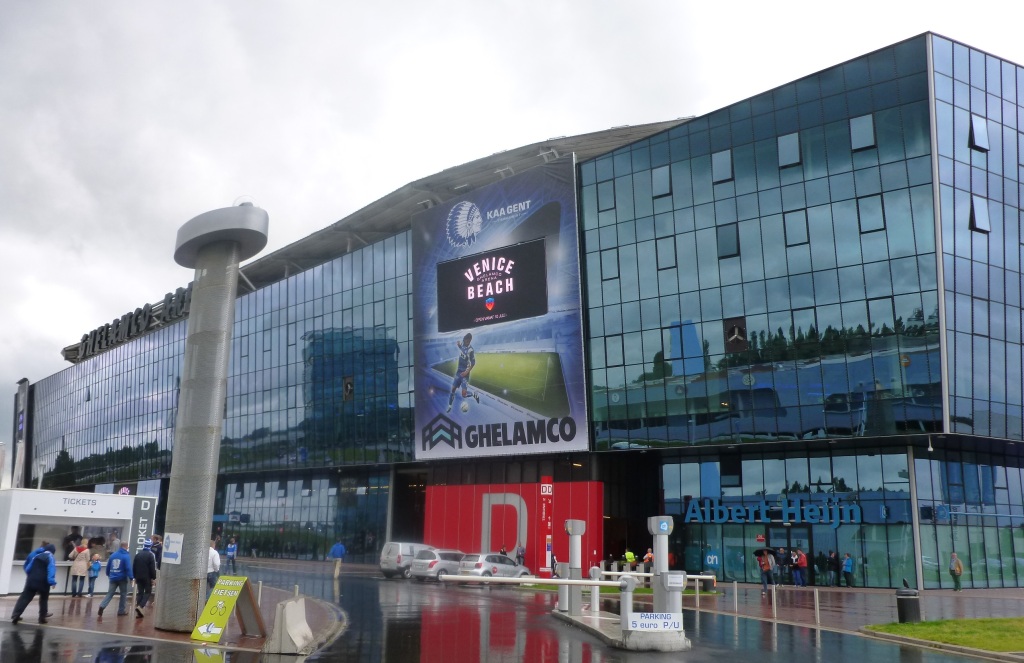 If you love your foreign football, but find it difficult negotiating your trips abroad with your other half, then Gent is a footballing city designed for you….and them!

Throw in a surprise weekend away to Gent and by the time you’ve had your photo taken together on St Michael’s Bridge, wandered round the historic old town hand in hand, perused the Patershol bric-a-brac street market in between a few cocktails, and you will have gained enough leverage to warrant your visit to the Ghelamco Arena!

Gent is located only 30 minutes from Brussels and Bruges, and an hour from Lille, so a short Eurostar football weekend is closer than you think. With games scheduled in the Jupiler Pro League from Friday-Sunday, and most other Belgian cities within easy reach of the capital, you can easily experience at least three top flight games in one weekend if that floats your boat. Combining ‘football on tap’ with the countries infatuation with beer, chips and waffles, and Belgium quickly ticks most of the prerequisite boxes for a decent European football weekend! 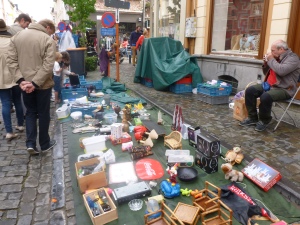 If you do happen to be in town and KAA Gent are playing on a Sunday evening, you could do worse than start your day by heading to the Patershol quarter for your pre match. A unique medieval area just north of the Gravensteen Castle (just off Oudburg Street), Patershol is an area famous for its Sunday Bric-a-Brac street market. You’re probably thinking big deal, but this place has to be seen to be believed. Think Portobello Market, Brick Lane and Street Feast all rolled into one!

Quite literally a maze of cobbled streets all lined with people selling all manner of useless shit, and all interspersed with bars, cafes, and live music. Throw in some quaint piazza’s and terrace bars and you can easily kill a few hours having a few drinks, perusing tat, and before you know it you’ll be going home with an old shop till, some broken toys for the kids, and some moth balled clothes for the missus. Blame it on the 9% Duvel! 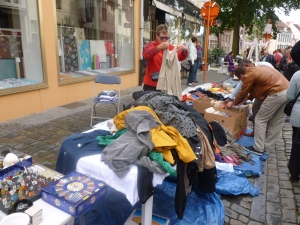 amount of people rifling through this junk but after a few pints you can easily get sucked in. Suddenly, in between bars I found myself on the hunt for some bargain retro Belgian football gear! Unfortunately no sign of an Enzo Scifo key ring, a Michel Preud’Homme comedy wig or that diamond in the rough – a 1984 Anderlecht UEFA Cup scarf!

Anyway with a few hours killed wandering the ancient streets and bars of Patershol it was time for my focus to return to football. The Ghelamco Arena is a one of those new build stadiums located a fair way out of town, on you’ve guessed it, an industrial estate. There is a free shuttle bus that runs from Woodrow Wilsonplein (platform 6) in the old town out to the ground, and for 1 euro, it will bring you back again after the match. The journey takes about 15-20 minutes. Apparently you can also catch Tram

4 from Gent St Pieter’s train station, alighting at Gestichstraat, and then making the rest of the way on
foot by following the canal to the stadium. Sounds complicated doesn’t it? And as I didn’t get my Duke of 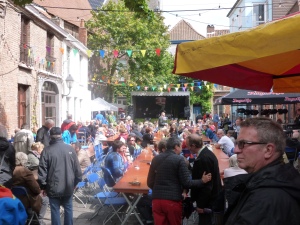 As you pull up outside the Ghelamco Arena you can’t failed to be impressed by their shiny new home. But as is often the case these days, there’s not much else around the modern out of town ground. No merchandise sellers, not even a burger van, and with the exception of one small bar close to the main entrance, you may as well head straight inside and embrace the ‘Gent Consumptiekaart’ experience!

The consumption card is your essential prerequisite for food and beverage, and although it’s set up to be a smart card system, it’s not designed for football tourists and ends up frustrating the hell out of you! Firstly you pay 1 euro for the privilege of accessing a credit card style consumption card. You then need to preload it with cash before you can purchase anything. Here’s where KAA Gent’s marketing manager has earned his bonus. You can only load up your card in multiples of 5 euros, and with a half pint of beer priced at 2,60 you would need to put 10 euros on to get two beers that should just cost you 5,20!

With 10 euros on the card your immediately tempted into having that 3rd beer, and then as you realise you still have 2,20 euros left – an agonising 0,40 euros short of your 4th you reluctantly top up your card again. It’s a viscous cycle! Essentially having one ½ pint of beer will cost you 6 euros with this smart system! With the cheapest food item at 4 euros there seemed to be no possible food and drink combo that would ever come close to a 5 euro multiple. Clever marketing I suppose, and I ended up spending 15 euros when I initially wanted to buy just a couple of drinks for 5,20 euros!

The consumption card systems also means you have to queue twice to get your drink, and whilst your stood patiently in line you can’t help but notice how bright and spotlessly clean the inside of the ground is. Usually decorating in white when you have thousands of blokes drinking and eating would be a faux pas – but not here they clearly love a challenge! Rumour has it ‘Flash’ have already lined up the arena as the venue for their next advert film location! 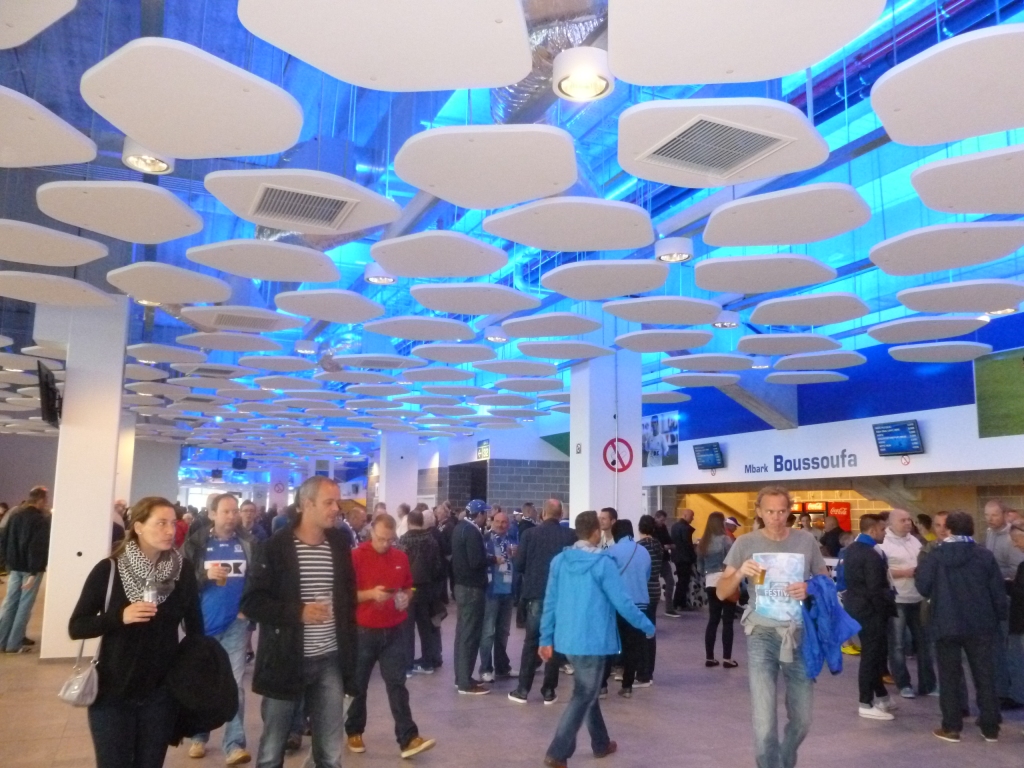 Once you’ve negotiated the smart card system and called upon your GCSE Maths grade C to work out the pricing combinations, it’s time to take your seat. The stadium is one of those that seems to be built far bigger than it really needs to be. It has an all seated capacity of 20,000, but viewed from the outside you would think it would have a capacity of at least 40,000. It’s visually impressive, but inside, the seating area seems rather restricted given the height of the stadium. A lot of space is designated to the corporate sections of the ground, including the impressive looking ‘sky boxes’ raised high up above the playing surface. Similar to Porto’s Dragao Stadium there’s an open air gap between the back of each stand and the structural supports for the stadium roof. 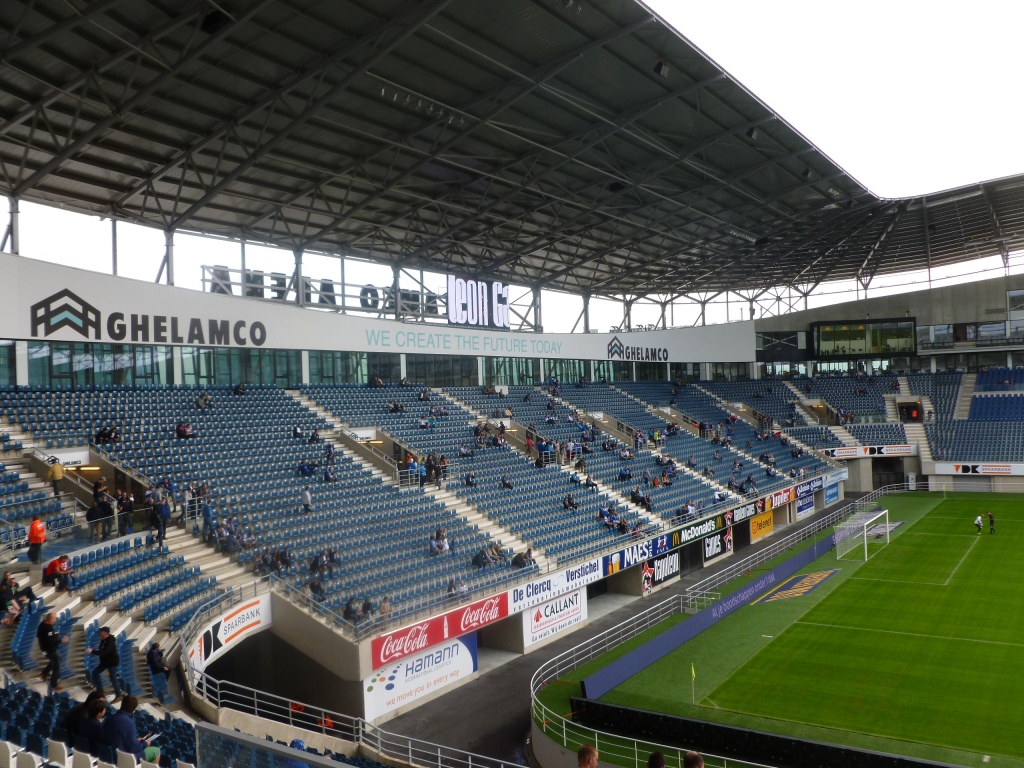 Once in your sector you can move freely around the whole stadium if you want too. At half time (and as the consumption card auto machines robbed me of 10 euros) I wandered around to the other side of the ground and nearly bagged myself a seat in the executive ‘comfy arm chair’ seats section. Lazy stewarding means you can pretty much go where you want and do what you like, and if you’ve got the front you could have easily got into the corporate hospitality section. If I hadn’t have been wearing shorts I would have definitely tried my luck. 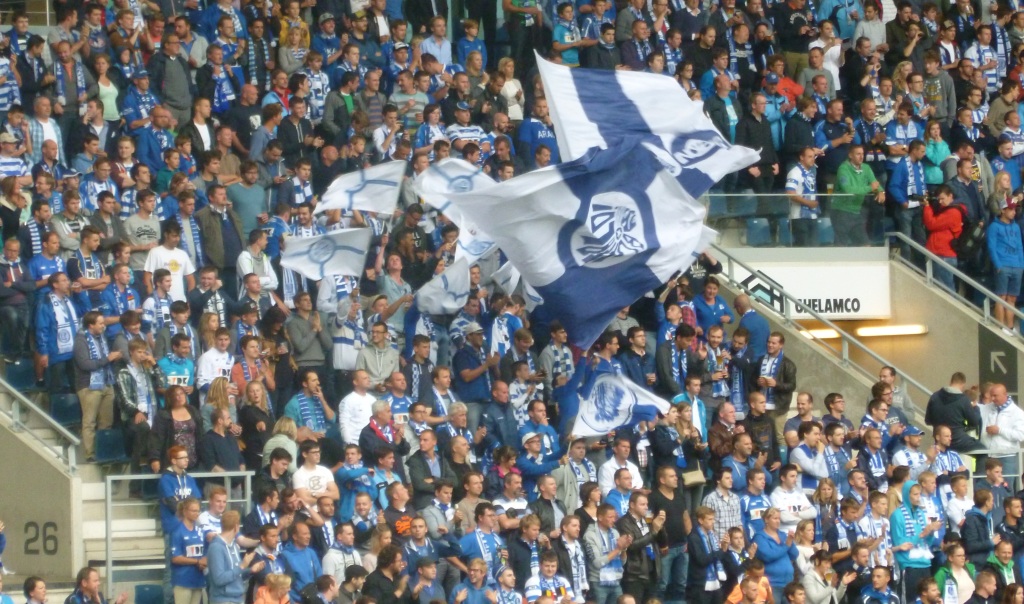 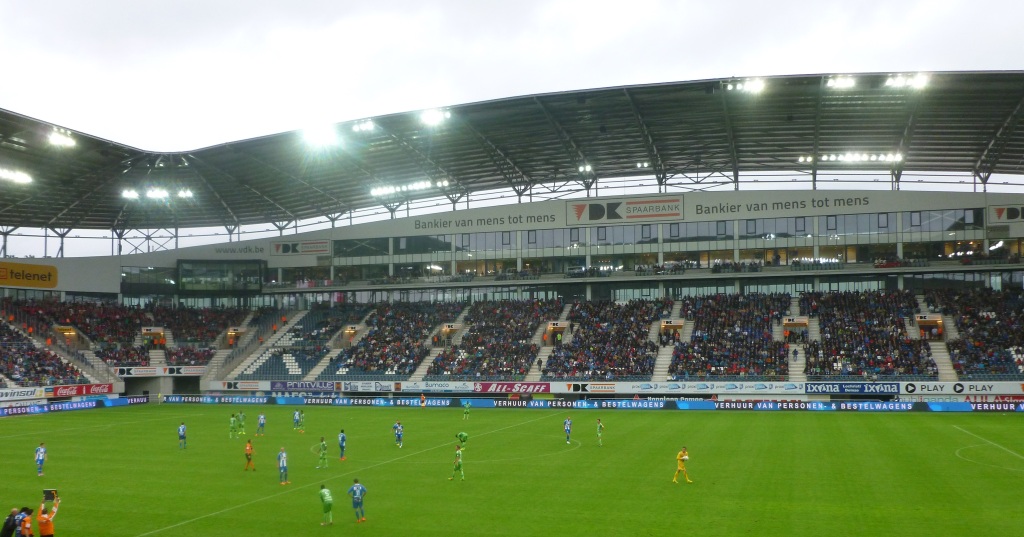 Believe it or not KAA Gent are nicknamed ‘The Buffalo’s’ following a visit to the city by Buffalo Bill and his Wild West Circus in the early 1900’s! Slightly bizarre for a European football club to adopt a native-American association, and according to football blog site ‘The Belgian Waffle’ the circus crowd enjoyed it so much that Buffalo became synonymous with the cities football club. The image of a proud Indian in full head dress is the clubs crest, and Gent’s mascot dresses head to toe in full chieftain attire, and can be seen circling the pitch before kick-off at each home game. All that was missing was the Indian war cry over the loud speaker to rally the fans into action! 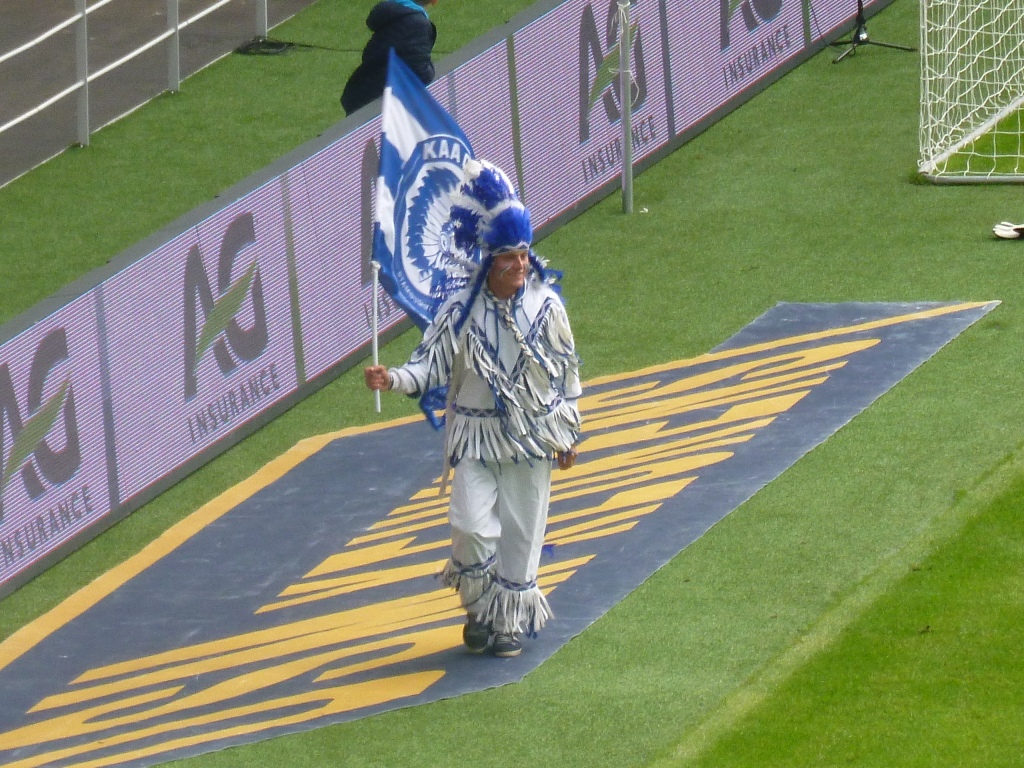 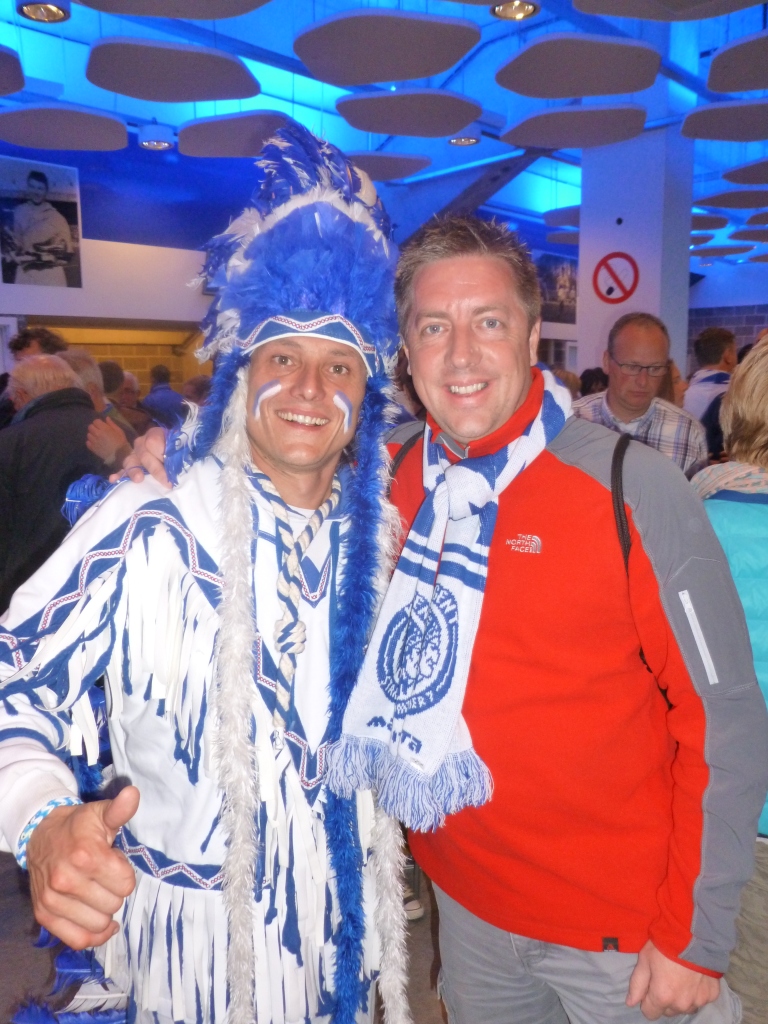 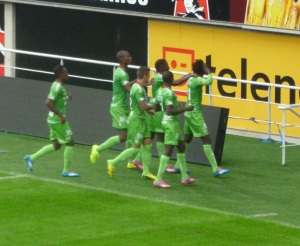 The match itself was the proverbial game of two halves. Zulte had a really good first half and looked pretty comfortable, deservedly taking the lead just before half time through Guinean midfielder Idrissa Sylla, or ‘Waddle’ as he is apparently known due to his similar playing style to the former Spurs and Marseille legend! Prior to the goal Sylla had received bucket loads of abuse from the Gent supporters and he took great pleasure in celebrating his goal right in front of the home end (see photo right).

Gent had the perfect chance to get back in the game on 61 minutes as they were awarded a penalty. However Kums effort from the spot was placed at a nice height and seemed comfortably saved by Zulte keeper Sammy Bossut. You can imagine the deflation felt by the Buffalo’s in the stand behind the Zulte goal! Click on the video link below:

To Gent’s credit they didn’t let the missed penalty affect them and they continued to attack and in a blink of an eye (well almost) two goals in 3 minutes from Habibou and Milicevic on 69 and 72 turned the game on its head. An immediate cure to the Buffalo’s disappointment of the missed penalty a few moment earlier.

Gent wrapped up the 3 points in the 84th minute, as a second penalty was converted by Milicevic.

As out of town new stadiums go, the Gent experience is pretty good. Unlike most, this stadium is not too big for Gent, and with average gates around the 18,000 mark every home game is nearly full. The city itself is superb and whether you’re on a romantic break with your other half, or on a boozy football weekend with the boys Gent is definitely worth checking out.

Tickets can be easily purchased on-line via the clubs ticketing website, and tickets tend to go on sale two weeks in advance of each home game. 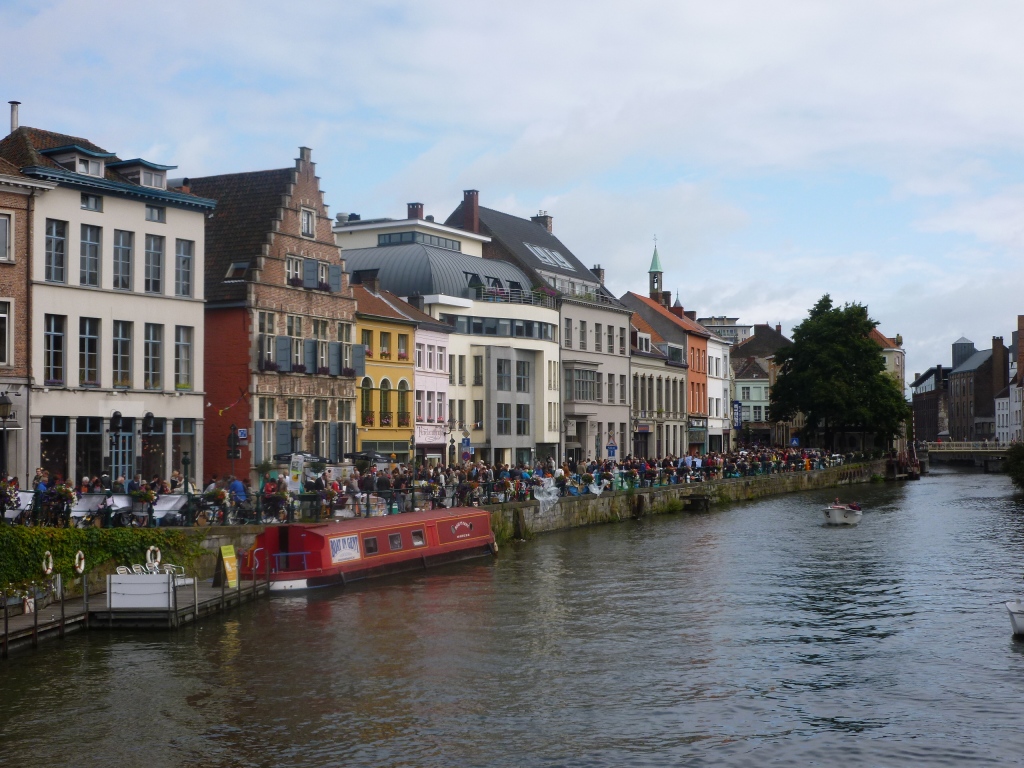 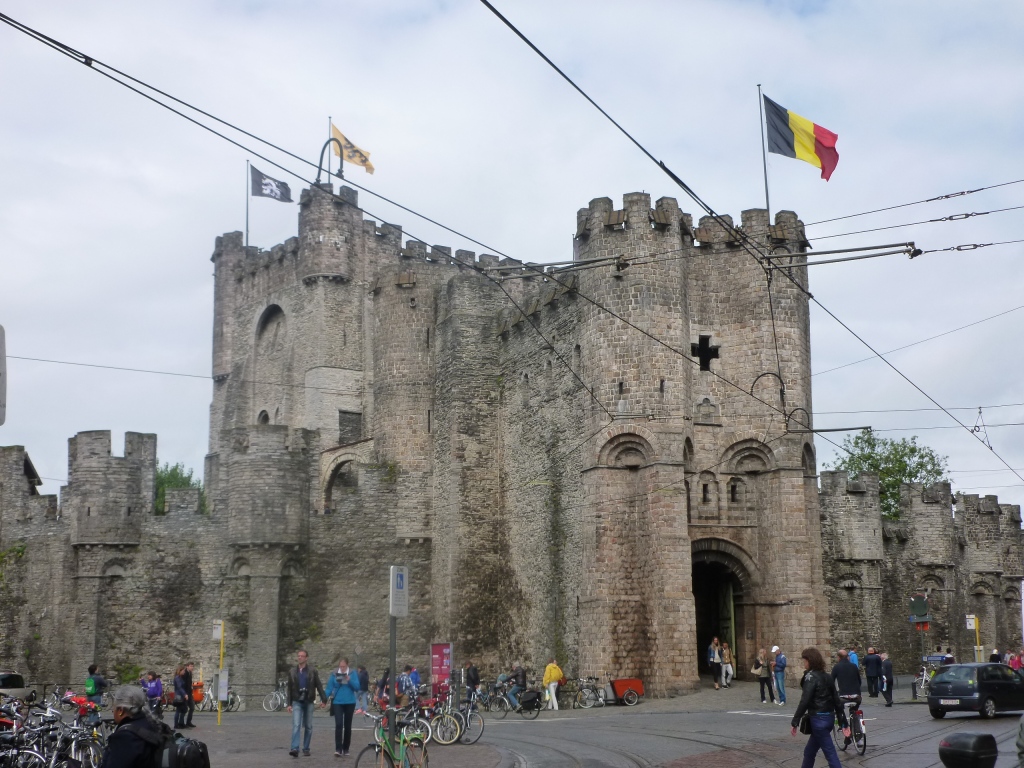 Gent Cathedral (top); the start of the Patershol street market (middle); and the Gravensteen Castle (above).