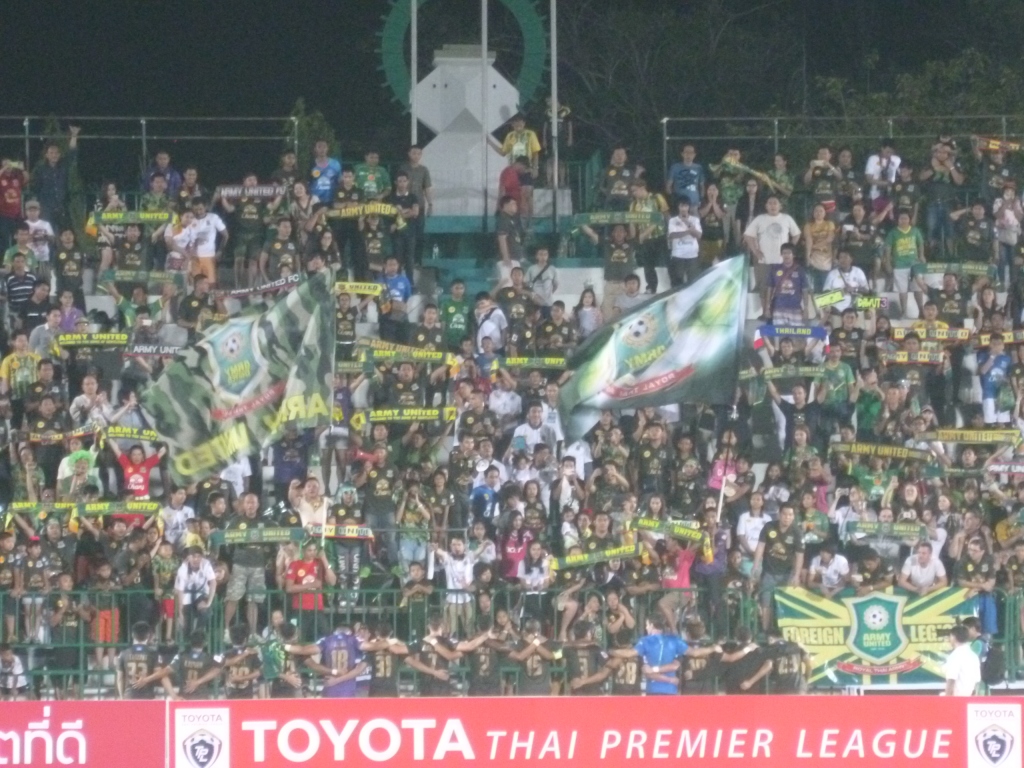 What better way to round off a two week island hopping tour of Thailand than to take in the curtain raiser to the new Thai Premier League season? Ok, perhaps not on every Thai tourist’s bottle of Chang, but this was right up my street!

Army Utd v Siam Navy in the heart, and heat of Bangkok provided an almost irresistible opportunity for me to gain a first experience of Asian football. The fact the game fell on the evening of Valentine’s Day during a 2-week holiday might have proved problematic for most, but thankfully my wife is made of stronger stuff. Ten years of putting up with my passion for watching random games abroad, and she now quickly recognises a unique footballing opportunity when it presents itself, and as such true love prevailed!

Despite being 6,000 miles from home, the first thing that hits you when you touch down in the Thai capital is the unavoidable coverage of the English Premier League, which I have to say is quite disappointing! Personally, when I travel half way round the world I prefer to steer clear of ‘the best league in the world’; tales of QPRs disappointing January transfer window; and updates on Olivier Giroud’s latest haircut!

There is more coverage and advertising of the EPL here in Bangkok than in England itself. Whether it’s a sky train covered in Everton players promoting Chang beer; Man Utd players advertising ‘Euro Cake’; public buses decorated with Man City players; a Leicester City club shop at the Central Metro station; Chelsea players on cans of Singha; taxis declaring their ‘loyalty’ with club badge stickers adorning their cars; and fake English club shirts visible on every turn of Bangkok’s cluttered streets. It goes on, but you get the picture. The global brand that is the EPL has well and truly prostituted itself in Bangkok. Maybe it’s just me, but I’d much prefer the uniqueness of an Army Utd shirt or a Buriram Utd training top hanging at a Bangkok market stall than a rail of EPL club kits any day! Anyway I digress!

Heading back to Bangkok a quick bit of Army Utd ‘googling’ revealed very little, except for the location of the Royal Thai Army Stadium (the home of Army Utd), and perhaps rather surprisingly (for me anyway) that they are managed by Gary Stevens, the former Tottenham, Brighton and England full back. With no forthcoming ticketing information from said Google search, I turned to social media and decided to tweet the gaffer himself directly. Where else in top flight world football would you randomly tweet the 1st team manager about tickets and seriously expect a reply? But Mr Stevens duly obliged and kindly confirmed that there would be no trouble getting tickets at the gate on the night. That in itself folks is worth a twitter follow surely! (@GaryStevensUK)

If you’ve been to Bangkok before you’ll know that traffic in the city centre is an absolute nightmare (see below), and unfortunately it’s an often unavoidable way of getting around town. The Royal Thai Army Stadium is situated in the Phaya Thai district, and the easiest way to get there is to get the sky train to ‘Phaya Thai’ or ‘Victory Monument’ station, and then jump in a cab from there which will set you back about 100 Baht (£2). 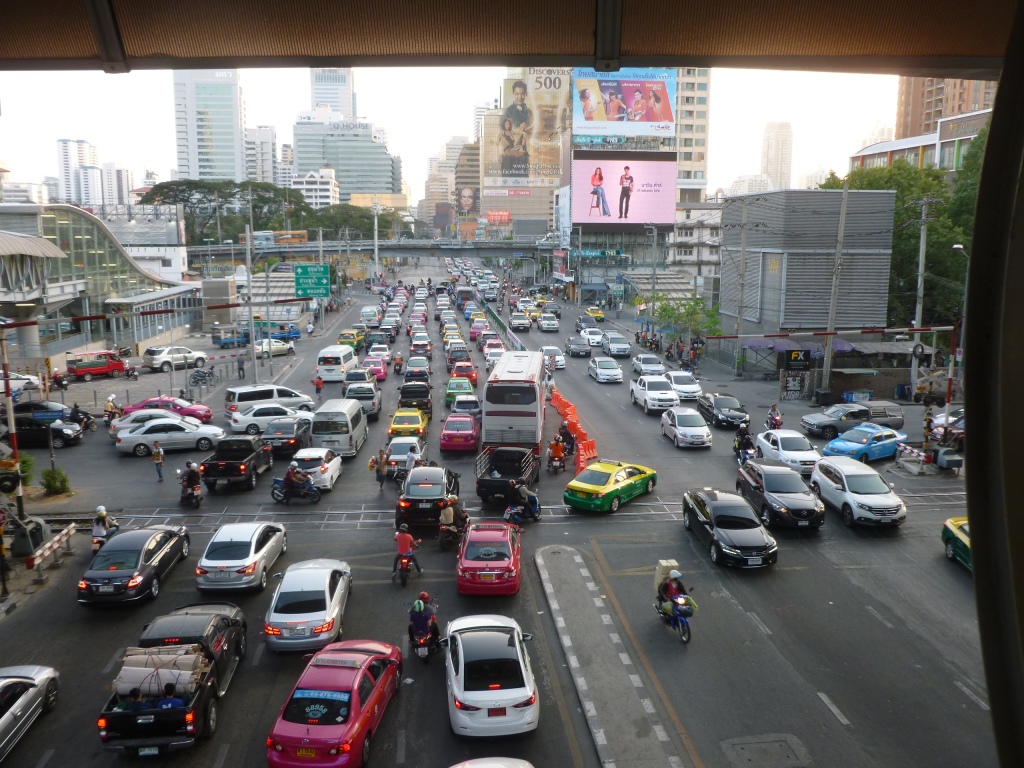 With a 20,000 capacity, the stadium has one seated main stand, and three sides of terracing or concrete seating all separated by that old fans favourite – an athletics track! The ground wouldn’t be out of place on the Eastern Bloc, and with the exception of the away fans and what appeared to be army personnel behind one end, the home fans took their place on either side. Tickets can be purchased from one of two locations –  a ticket office on the ‘Thanon Vibhavadi Rangsit’ road side (outside the home terracing section), or on the opposite side of the ground outside the player’s entrance via two ladies sat at a table selling tickets. Terraced tickets are priced at 100-150 Baht (£2-3), but as it was Valentine’s Day I thought I’d splash out and treat the wife to a VIP seat at 200 Baht (£4)! 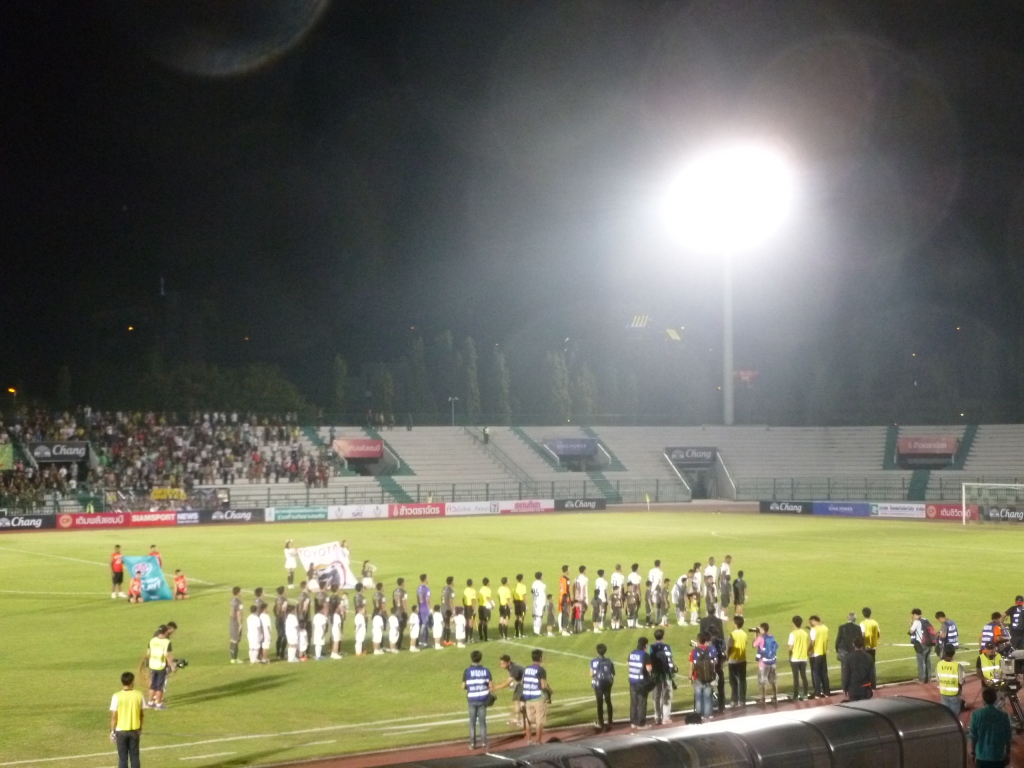 Players line up for the national anthem before kick off…

As you enter the ground, you get flashbacks to your old school disco as you receive an ink stamp on the back of your hand. With no catering options inside, and in certain parts of the ground no toilets either, the ink stamp becomes your passport in and out of the stadium both before and during the game! There are a number of small shops and bars on the perimeter of the stadium, and there is an area of marquees located outside the home terraced section which gives the feel of a fan park. There was a real relaxed and friendly vibe here and it made for a great place to have a pre match, half time and post-match drink! A large bottle of Chang costs 60 baht (£1.20) and you can come and go as much as you please during the 90 minutes too. At half time it was a bizarre sight as most of the stadium spilled out onto the streets outside and head for the refreshment tents. With 1 litre plastic beakers handed out there’s not only room for your large 640ml ice cold bottle of Chang, but also an extra 330ml can on top! No problems keeping hydrated in the heat of Bangkok here!

The Army Utd Capo – a cross between Aladdin and ‘Daffyd’ the only gay in the village from Little Britain?!

Whatever next…..Ultra’s in short skirts and knee high socks!…

Siam Navy had a few hundred in the away section…

On this viewing the standard of Thai football seemed more than half decent. Gary Stevens appears to have developed a well organised team, one that has players clear on their individual and collective responsibilities within the team in terms of both attacking and defensive phases of play. Against Siam Navy, they looked to exploit from wide areas, and both wingers mixed it up providing good service from crosses on the outside or feeding smart low passes into attacker’s feet after cutting inside. Army Utd looked particularly lively from set pieces, and caused numerous problems from well worked corner routines and free kicks around the box – a reflection of time put in on the training ground. In all honesty Army Utd could, and really should have been 3 or 4 nil up at half time with the game out of sight. But as the first half wore on and chance after chance went begging you couldn’t help but feel Siam Navy might end up getting something from the game. Gary Stevens’ pacing and gesticulating on the touch line appeared to reflect a similar feeling.

In first half stoppage time though Army Utd managed to get the breakthrough their possession and first half domination deserved. A free kick from the left side (see below) was beautifully struck and curled in off the far right hand post and into the top corner by Limwanasthian.

The second half followed a similar suit to the first. Siam Navy’s main threat came via their 6’4” Honduran striker Georgie Welcome. As the second half wore on, Stevens signalled up to the Army United first team scout who happened to be sat right next to us in the ‘VIP section’. He skipped down through the stand, and made his way to the dug out via an unmanned side gate next to the player’s tunnel.  From here he seemed to relay some tactical information that informed Steven’s pending substitutions.

The game ended in real drama. In the last minute a Siam Navy long ball seemed to initially evade Army Utd’s centre halves, and Georgie Welcome found himself through on goal. Despite a good first touch that took him away from the defender and into the penalty area, the centre half recovered well and seemed to get a touch on the ball before bringing down the striker on his follow through. To the dismay of Stevens and the rest of the Army Utd squad the ref immediately blew for a penalty. Stevens went ballistic at the 4th official as victory looked like it was going to be cruelly snatched from Army Utd. Four loud cries of “No”, “No”, “No”, “No”, in the face of the 4th official could be heard from the main stand and seemed to have an influence. After a short delay, and consulting his linesman and 4th official the referee amazingly overturned his decision! Rarely does this situation happen in football and whilst you could understand the frustration of Siam Navy and their fans, justice seemed to be done to the vivid relief of all connected to Army Utd!

As the final whistle went, that aforementioned gate that the first team scout had passed through next to the player’s tunnel remained open and unmanned by stewards. The temptation to walk pitch side and be part of the post-match celebrations was just too much to resist, and before I knew it I was having a quick post match chat with the gaffer! Can you imagine that happening anywhere else? It was all rather relaxed, slightly bizarre given the late match drama, but a brilliant end to my first Thai football experience. Thanks to Gary Stevens for his openness and time at the end of a dramatic game. Good luck for the rest of the season!

The wife made a real Valentines Day effort to get into the spirit of things!…