Football has taken me to some amazing places. Places that I know I wouldn’t have ordinarily chosen to visit. Following the national team for example, I certainly wouldn’t have picked destinations such as Belarus, Moldova, Ukraine and San Marino for a random weekend break. Similarly, and in terms of domestic football, I probably wouldn’t have realized the wonderful delights of cities such as Belgrade, Thessaloniki and Poznan had it not been for my obsession with football and my intrigue into fan culture that surrounds the beautiful game! But all of the above (and many more) have provided me with some of the most memorable trips I’ve had, and not just from a football perspective, but believe it or not culturally too!

One such place that should feature high up on your ‘must go to places to watch football’ list is Copenhagen. That might come as a bit of a surprise, and if tales of Hans Christian Andersen, the Little Mermaid, and Carlsberg beer are the first things that spring to mind when you think about the Danish capital, rather than a hotbed of football fanaticism, then you could be forgiven!!

Ok, the domestic league doesn’t have the highest profile in Europe, and it probably doesn’t feature too highly on most football tourists lists, but for what it lacks in profile and big names it more than makes up for on the terraces, and then some! There is a strong sense of fan culture in Denmark, and without doubt the fixture you need to experience and ‘make’ the time to see is the derby between Brøndby and FCK. Passionate, colourful, noisy, intimidating, awe inspiring, fanatical are all adjectives that immediately spring to mind. Pyrotechnics, smoke, fireworks, bangers, surfer flags, drums, and relentless chanting all help bring those adjectives to life. But unlike many of the fiercest rivalries battled out across Europe this one’s in its relative infancy, but you would never know it such is the intensity that surrounds this fixture! 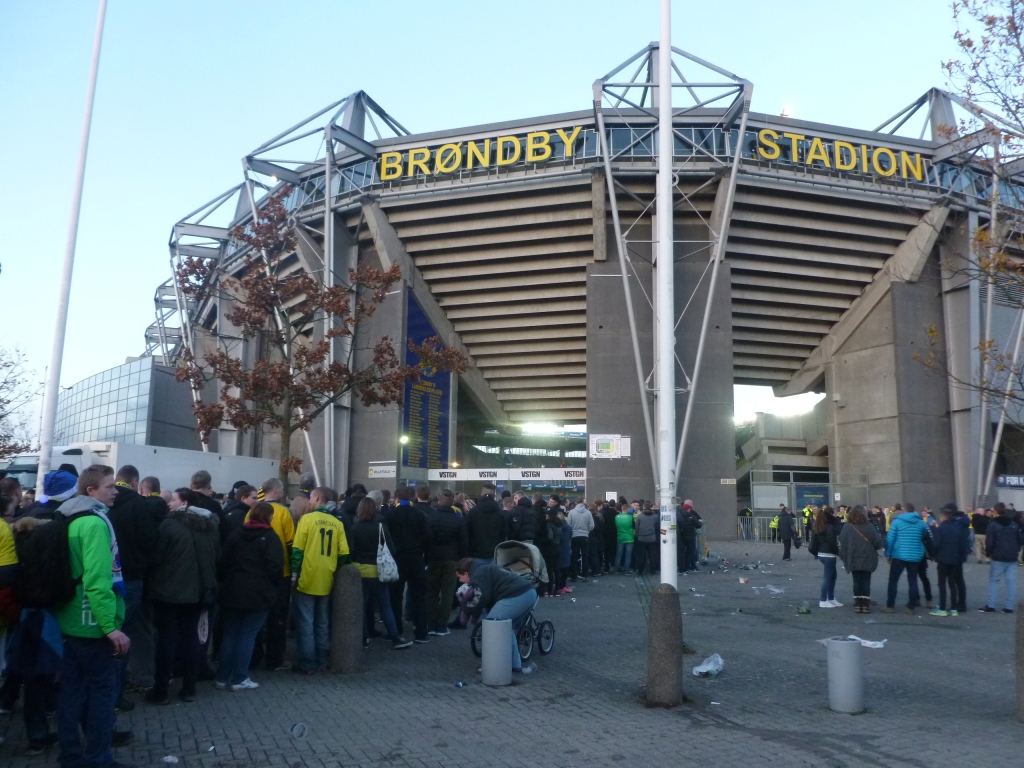 Brøndby are viewed as the ‘poor man’s club’, the face of the working classes if you like. Nicknamed the ‘Drengene Fra Vestegnen’ (The boys from the Western outskirts) the club is based in the western suburbs of Copenhagen, an area of the city generally associated with higher rates of unemployment and reported crime. On the face of it though a stroll through Brøndbyoster resembles a stroll through a typical outer London suburb. All rather pleasant! The fans here will quickly tell you that their club is the one with ‘history’ and in Danish terms a ‘European pedigree’ too. Formed in 1964, Brøndby ’s most successful period began in the 1980’s, and 10 titles in 20 seasons between 1985 – 2005 signalled the club’s glory years domestically. It was during this period that Brøndby experienced some high profile European campaigns, the memories from which are fondly recalled by the fans. It was an era that really started to put the club’s name on the European map, and although the most notable achievement  was reaching the quarter finals of the 1986/87 European Cup, the moment many fans recall as ‘their’ European highlight was when Brøndby knocked out former European heavyweights Liverpool in the 1995/96 UEFA Cup in their own back yard at fortress Anfield.

It’s no coincidence that the most successful spell in the club’s history also marked a thriving period for the Danish national team. Famous Danish names such as John Jensen, Lars Olsen, Peter Schmeichel, Brian Laudrup, and Kim Vilfort all plied their trade in the classic yellow and blue of Brøndby. These players also formed the backbone of the Denmark team that remarkably went onto win the European Championship in 1992. With the exception of Brian Laudrup, who went on to sign for their hated rivals, how the Brøndby fans would welcome players of that calibre back now!

The Sydsiden…home of the Brøndby Ultras…

In recent years Brøndby have fallen on troubled times and have only just about managed to keep their head above water.  As with many clubs in turmoil, problems on the pitch are often intrinsically linked to problems off the pitch. A nail biting last minute escape from relegation in the 2012/13 season was followed by a second great escape when the club avoided bankruptcy in May 2013. Brøndby were initially saved in the eleventh hour by a group of investors led by Ole Abildgaard and Aldo Pedersen. But 11 months on and a new main investor – Jan Bech Andersen – took over as chairman, and replaced the board with his own new team. Three months later and the club announced a multi million pound sponsorship deal with Danish betting company Bet25. Short term stability seems to have been secured, and improved league performances in recent seasons have seen Brøndby once again qualify for Europe, competing in the Europa League for the last two seasons.

FC Copenhagen on the other hand (or FCK as they are more commonly known) are the new upstarts in town, labelled by the Brøndby fans as the ‘rich fans’ club, and the club with the finances who’ve bought their short term successes. A fact Brøndby  fans are are not shy to point out! Formed in 1992 following the merger of two clubs KB1876 and B1903 (club names that resemble door entry codes rather than football clubs!), FCK have won 10 titles in 23 years since their formation. Impressive stuff. Today FCK undoubtedly have the financial clout to dominate Danish domestic football, but what Brøndby lacks in Krona’s it more than makes up for it with ‘soul’. 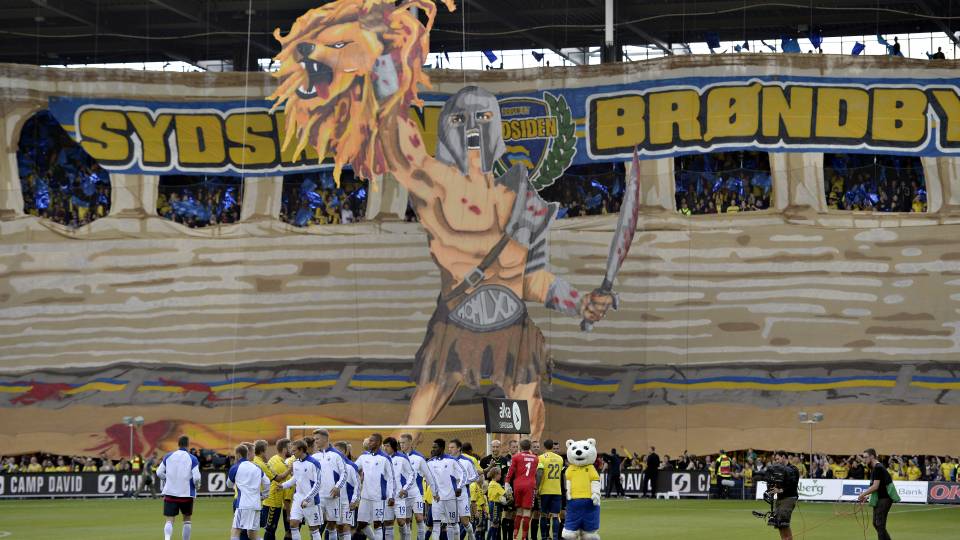 Its that ‘soul’ that makes the derby day experience at the Brøndby Stadion such a unique and  memorable experience. The Brøndby fans are notoriously meticulous with the design, planning and coordination of the tifo displays that create such a stunning backdrop to the on field action. The heartbeat of this preparation stems from the ‘Sydsiden’ (or South Side), the place where the Brøndby Ultras congregate. An unbelievable 3D moving tifo featuring a gladiator severing a lion’s head (above) was the Sydsiden’s previous derby day offering – and one of the finest fan displays you are likely too see!

The Danes love a firework too, and both sets of ultras regularly set off flares and smoke as part of the derby day experience. There can be fewer finer sights in football than a game played to a backdrop of passionate fans and burning flares, and in Copenhagen you’ll more than get your money’s worth! To their credit the FCK ultras more than played their part too, and every few minutes the sound of a pop and a hiss could be heard throughout the stadium as the next round of flares were being let off in their corner of the ground. 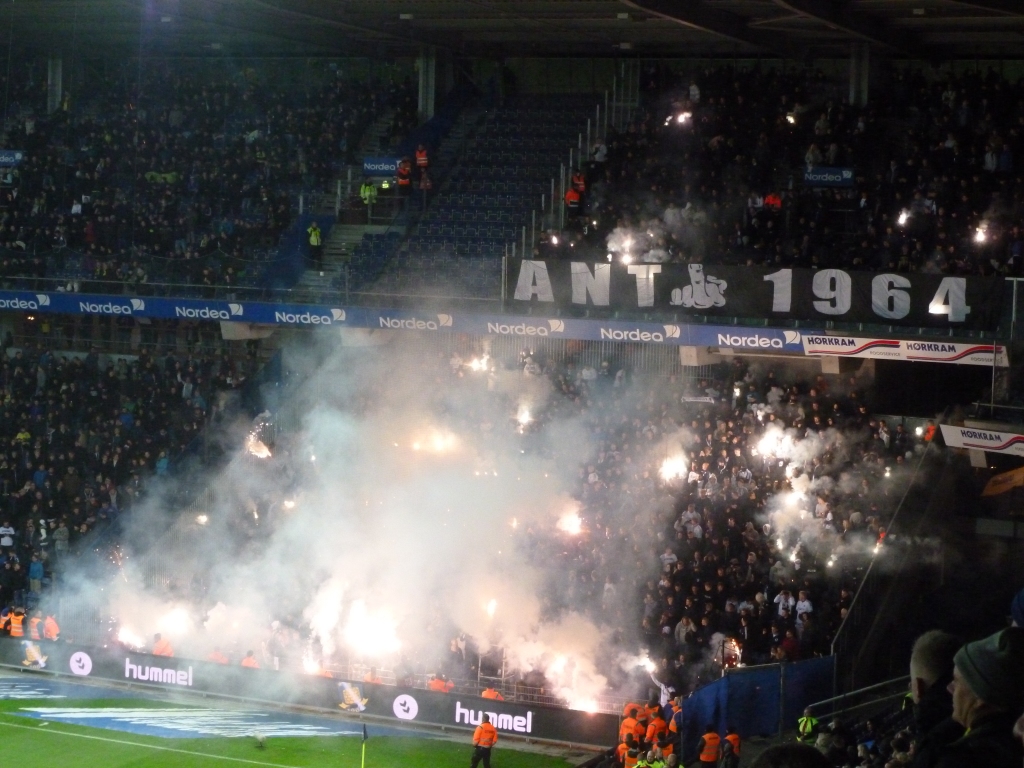 Due to the fairly low profile of the Danish league across Europe the Copenhagen derby can easily slip by unnoticed, and perhaps it doesn’t get the coverage these amazing fans deserve. But trust me when I say it’s right up there with some of the very best football experiences I’ve had! I’ve been lucky enough to attend some of the ‘biggest’ derbies in Europe and I would comfortably place it on a par with the Milan derby, Rome derby, Thessaloniki derby and Eternal derby in terms of fan culture, displays, passion, and of course pyrotechnics! 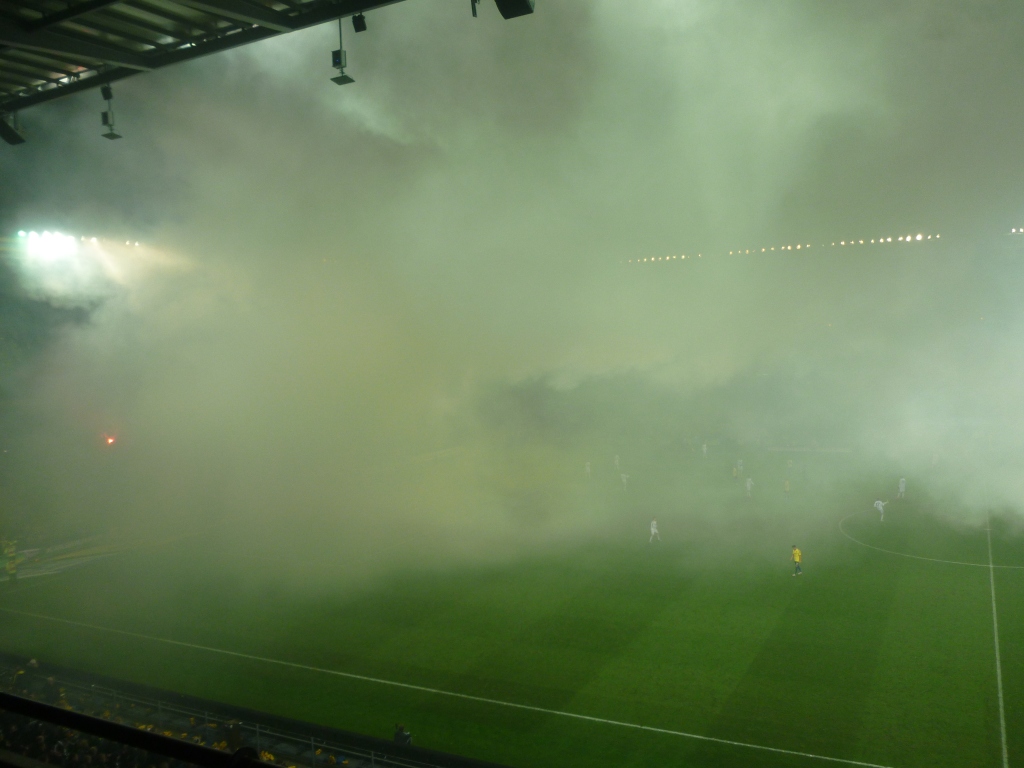 If like me, you’re partial to a well choreographed tifo display and a few flares at a football match (and no I’m not talking about retro dress sense here!) then you really have got to get yourself out to Copenhagen and visit Brøndby  – it really is one of the “must have” European football experiences!!

More images from the derby below: 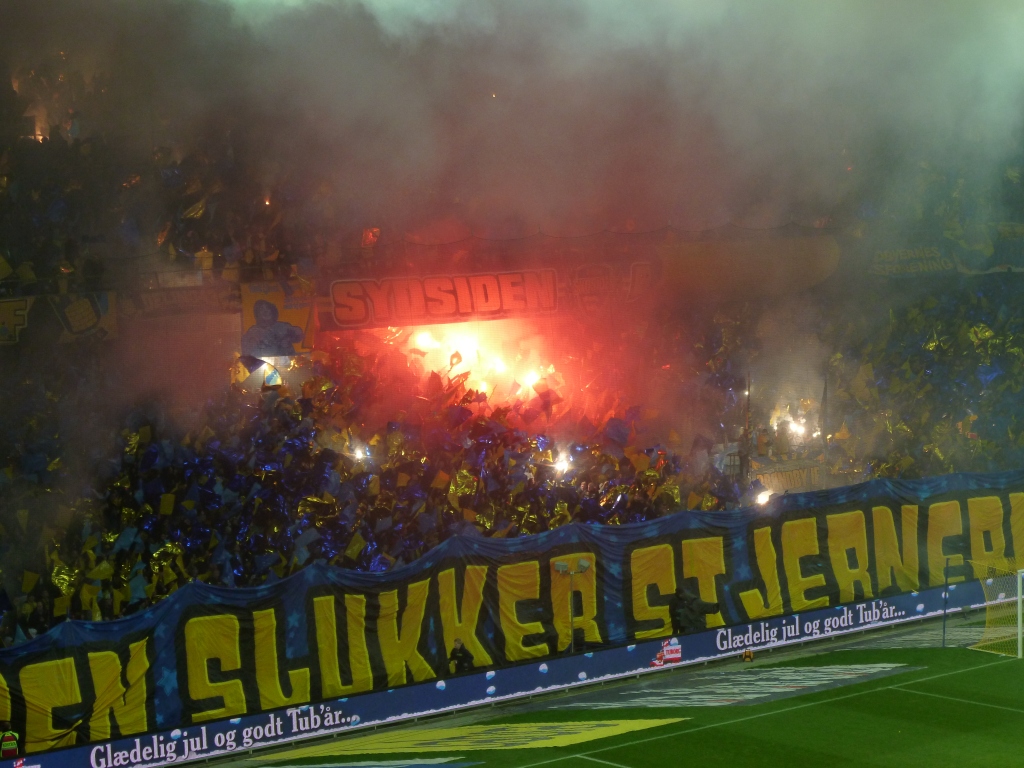 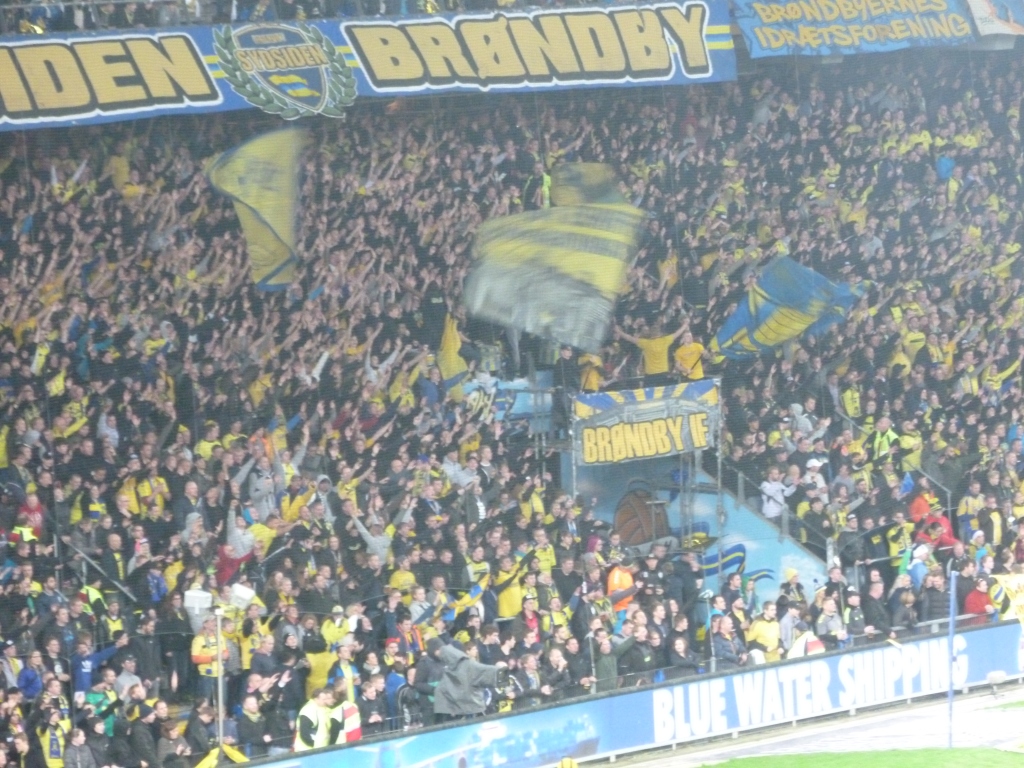 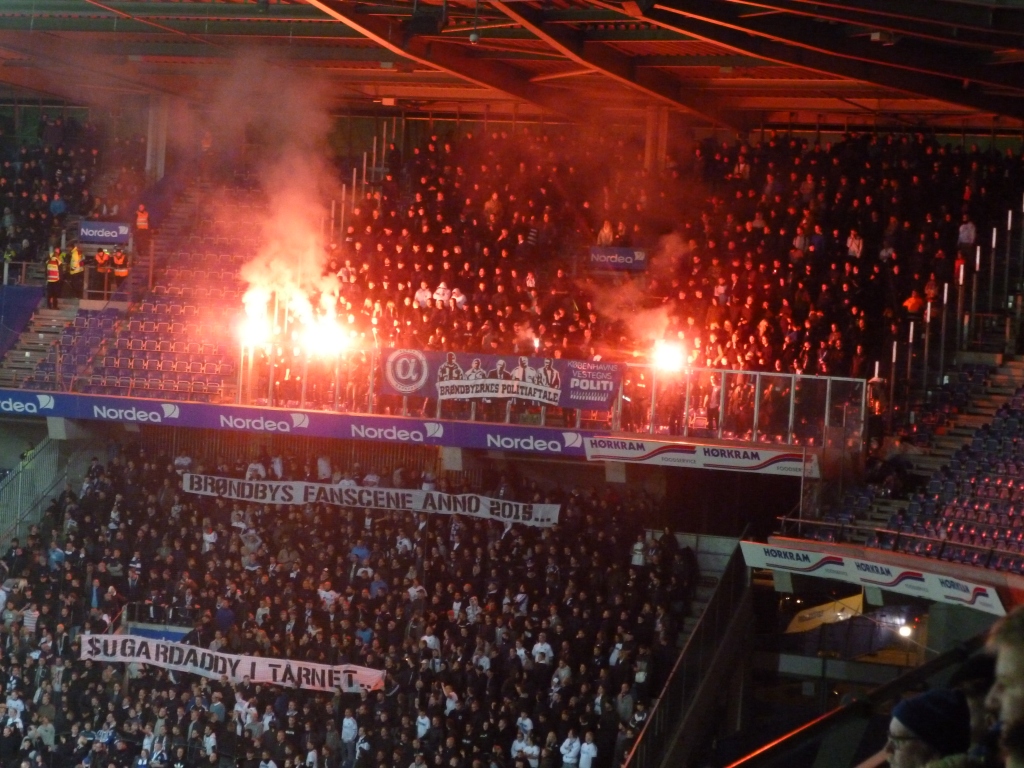