It’s not often you get the chance to go behind the scenes ‘free of charge’ at a football club the size and stature of Real Madrid, and certainly not on the eve of a Champions League knock out game. Nathan’s brother had the unique job of erecting the Champions League advertising boards that you see at stadiums across Europe, and had got himself a regular gig working at Real Madrid. Using his connections he managed to sort us out 3 media passes that would see us get a first glimpse of an empty Bernabeu; the opportunity to watch Juve train; as well as the unique opportunity of attending the press conference with Fabio Cappelo and Alex Del Piero. 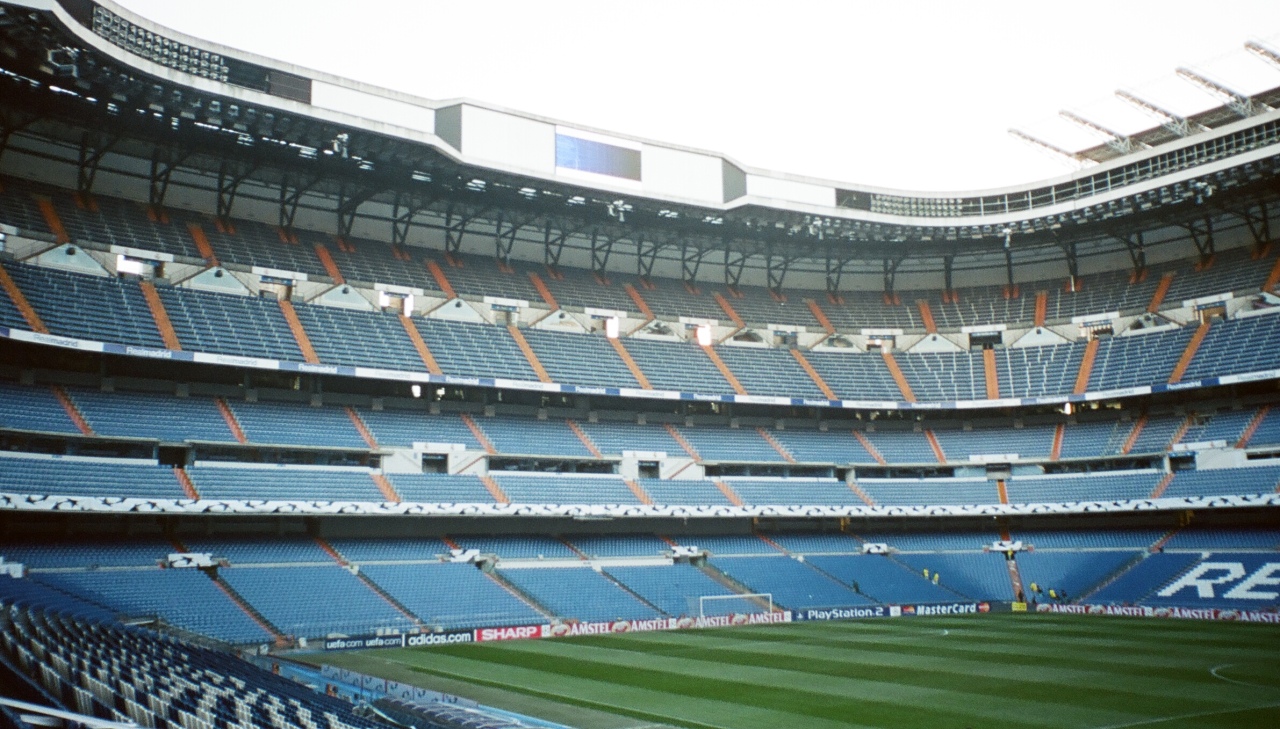 The Bernabeu is an iconic stadium with a capacity of 80,354. The stadium rise’s high above the posh residential apartment blocks in the upmarket ‘Chamartin’ area of Madrid. As we walked out into the stands of the Bernabeu to watch Juventus train on the eve of their 2nd round knockout tie, we were blown away at the sheer size and steepness of the stadium. It has four steep tiers encompassing the pitch and you literally strain your neck looking up to the top from pitch level.

Me, Putsey and Nathan preparing for the press conference…

The Juve squad, which had ‘galactico’s’ of their own in Buffon, Cannavaro, Thuram, Nedved, Ibrahimovic and Del Piero, went through a very modest training routine including some light stretching, running and some ball work.

The gaffer and skipper, Capello and Del Piero, left the squad early to conduct the routine pre-game press conference, and inside a packed media room both of them oozed confidence as the European media fired questions at the pair.

It was surreal sitting in amongst Europe’s top journalists in what is normally ‘off limits’ territory for people like us, but intriguing nonetheless to be part of what is ‘bread and butter’ for managers and players these days. In hindsight, I should have raised my hand, introduced myself as a ‘travel writer’ for ‘Look at These Scenes’ and thrown Del Piero a couple of curve ball questions – like “where do you stand on average players wearing coloured boots” or “can you dispel rumours linking you with a move to Southend United”.

Whilst the back stage passes were free we were about to pay through the nose and then some for the match tickets! After leaving the press conference, we decided to have a walk around the stadium to see if there were any touts dotted about. Of course there were – this was Real Madrid – probably one of the most ‘touristy’ football destinations in Europe if not the world – and the locals know how to get a few quid off foreign football tourists like us.

As mentioned in previous posts we have never struggled to find tickets for any game that we’ve been to abroad – but to be honest we have always gone in early, preferring to know a ticket is in the bag rather than wait until the last minute, in an attempt to source a bargain, but then run the risk of not getting anything.

24 hours before kick off was plenty early enough this time round, and it was advantage touts. A champions league knock out tie against Juve, Galacticos galore, and no tickets on sale through official channels. This was the equivalent of 3 match points and a 5 set lead in a grand slam final! 100 euro’s a piece later and we were the proud owners of 3 tickets in the highest tier of the stadium. Binoculars weren’t part of the deal!

Putsey – a little worse for wear in O’Connell’s

Madrid is a fantastic city, with a vibrant late night culture, an entirely different experience to what we’d grown up with in England. Bars don’t shut at 11pm – even on a Tuesday night – which was great – but unfortunately we drank with our 11pm closing time mindset in place!…and ended up in an Irish bar called O’Connells’ near ‘Sol’ where we continued drinking late into the night with some Juve fans we’d befriended after about 10 pints.

Match day and we awoke with very sore heads from the excesses of the night before. Brunch came in the form of a ‘Subway’ where we were to fall victim to an attempted robbery! Sitting at the table in a bit of a daze nursing hangovers from hell working our way through a ‘foot long’, we were suddenly engulfed with what seemed like a group of women and children. Creating a right commotion, they gatecrashed our table making noisy gestures, and went onto to throw newspapers over the table. Unbeknown to me they had seen Nathans wallet and mobile phone exposed and had attempted to distract us whilst nicking the valuables. Luckily Nathan realised what was going on (me and Simon didn’t have a clue) and grabbed his belongings. Cheeky fuckers.

There are a number of small bars and cafes surrounding the Bernabeu and we decided to plot up there a few hours before kick off to enjoy a few beers with the locals. I think we were in close proximity to the Ultra Sur fans group as several flares were let off in the packed piazza’s before the game. It all adds to the build up.

Inside the ground we were up in the gods, only a few rows from the back. The cheap seats were provided with electric heaters on the roof above which chucked out a bit of heat to keep you warm on a February night. It must be a few degrees colder this high up! 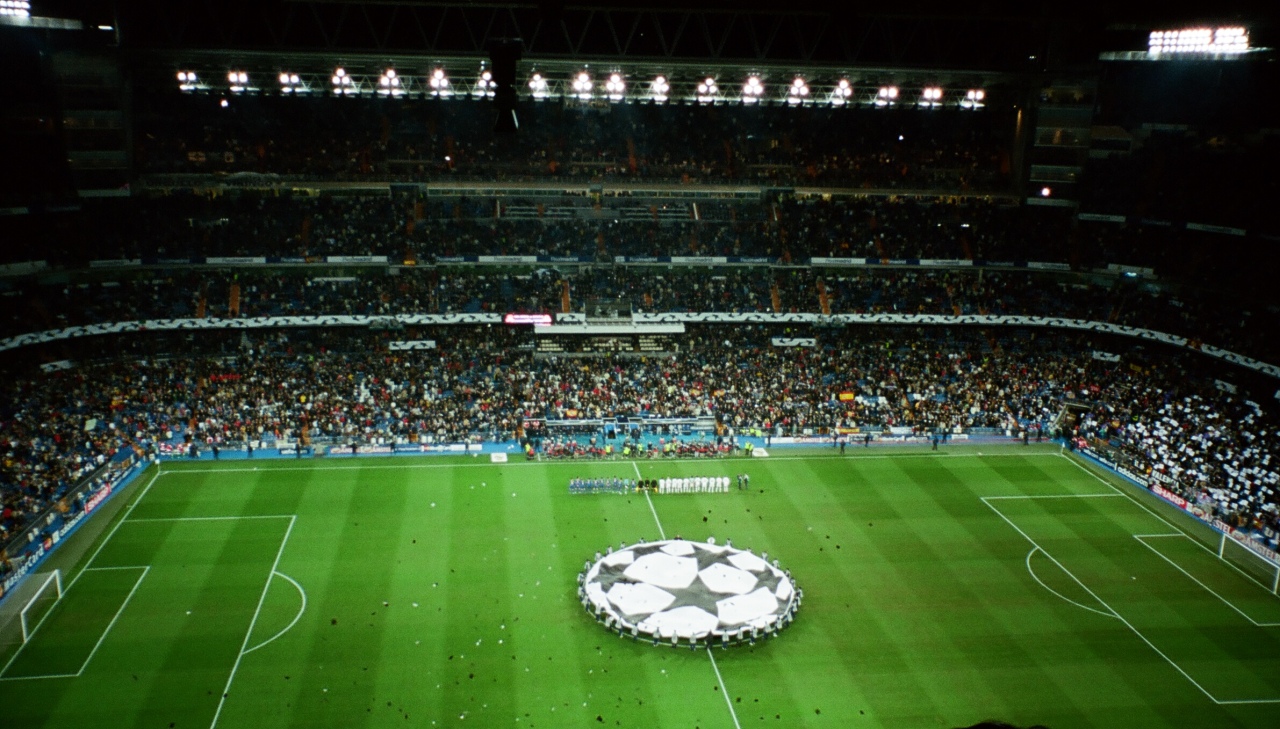 Prior to kick off the ‘Sur Ultras’ tifo provided an impressive back drop to the Champions League anthem as both teams lined up.

The Galacticos were out in full force – Carlos, Zidane, Raul, Ronaldo, Beckham and Figo all got starts. Zidane was absolutely outstanding on the night – making the central midfield role look easy – I don’t think I’ve ever seen a player so comfortable on the ball and with such fluidity and grace in possession – it was an absolute joy to watch.

Despite dominating the game, and missing a host of chances, Real Madrid could only take a 1-0 nil lead into the second leg in Turin. The only goal of the game came from a close range header from Ivan Helguera from a Beckham free kick on 31’.

It wouldn’t prove to be enough though as Juventus went on to win the 2nd leg 2-1 after extra time.