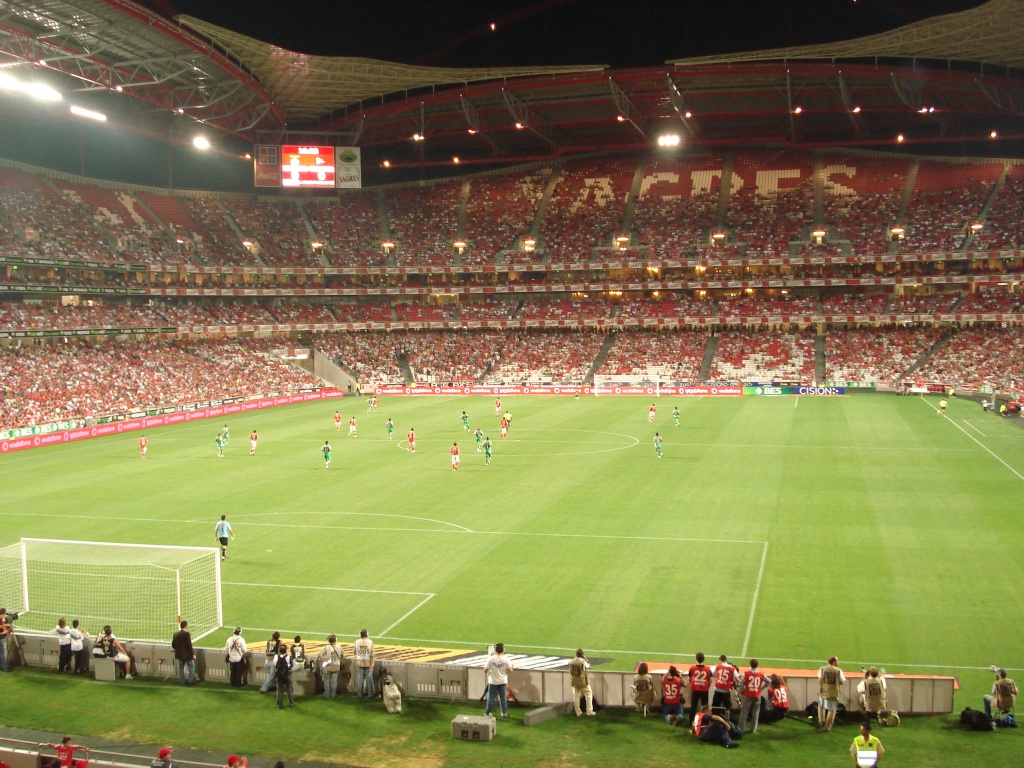 My summer holiday for 2007 was a carefully planned visit to Portugal and Spain, which was tied into the start of the new domestic season and the group stages of the Champions League and Europa League. We had taken a punt and booked outbound flights to Lisbon and then back via Madrid, it was just down to the fixtures computer and UEFA HQ to do the rest. The fixture list was much kinder than expected – providing us with opportunity for 6 games in 8 days. We weren’t going to pass that up!

Aside from being hot amd sunny in September, Portugal and in particular Lisbon was selected as a starting point for our opening weekend. Aside from the big two (Sporting & Benfica) there are two other top flight clubs based in Lisbon – Belenenses and Estrela da Amadora. We knew if the fixture computer was feeling generous we could get up to three games in the opening weekend; if not then we would have to settle for one as a worst case scenario. The footballing gods were definitely smiling on us as the Portuguese fixtures were released – not only did we get the three games – but all with staggered kickoff times. Result!

The weekend opened up on the Saturday night with Benfica v Naval 1 De Maio in the Bwin Liga at the Estadio da Luz. The stadium is a fairly ‘new build’, openend in 2003 in time for the Euro 2004 tournament and has a 64,000 capacity.

We purchased our tickets on the approach to the stadium at one of the ticket kiosks a few hours before kickoff. We weren’t really sure what the situation would be with tickets prior to this game; but apparently you can get tickets fairly easily for most Benfica matches including the derby against Sporting and northern rivals Porto.

The stadium is impressive to say the least and you can enjoy a pre match beer from the comfort of one of the bars inside the stadium. And this wasn’t any old bar hidden away under the girders of the main stand, but an area that I’m sure would normally be reserved for hospitality if it were a Premier League ground. With Sagres on tap, loads of Benfica fans and sweeping views across the stadium it made for a decent pre-match drink. To me, from the inside anyway, it looked like the Estadio da Luz had been the blueprint for Arsenal’s Emirates Stadium that had opened a year earlier in 2006. 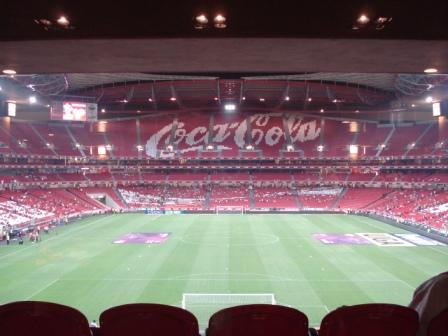 The view from the bar!

We knew little about Benfica’s opponents for the evening – Naval 1º de Maio – except that they are probably the only club in the world to have a ‘temperature degrees sign’ in their team name! However, we were looking forward to seeing some of Benfica’s current and former Portuguese internationals in action – namely Rui Costa, Petit and Nuno Gomes. Despite entering the twilight of their careers – Rui Costa and Nuno Gomes had been impressive in recent World Cup and Euro tournaments. Benfica’s team also included new 6 million euro summer signing Angel Di Maria – picked up from Argentine club Rosario. 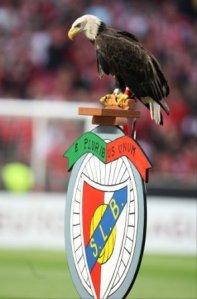 It is tradition at Benfica home games for their club mascot – an eagle – to be introduced to the crowd before kickoff. Expecting a large feathery mascot with sewn on wings to stumble around the touchline we were actually surprised to see the real thing swoop in down from the stadium roof. According to club sources, the eagle is called Vitória, and after flying several loops around the Estádio da Luz it lands on top of Benfica’s club shield, creating a real life version of the club’s emblem. When this tradition first started, the eagle would not land on the shield every time, so it was believed by fans that when the eagle landed on top of the crest the team would win their game. As time went on and the eagle consistently landed on the shield, this belief was quickly forgotten!

The match itself was a one-sided affair with Benfica enjoying plenty of possession and playing some attractive open attacking football. First half goals from Rodriguez on 22’, and then Rui Costa on 35’ (with a well taken finish from outside the box) gave the home team a comfortable half time lead. The second half followed suit and it was Nuno Gomes (the other player we’d heard of) who scored Benfica’s third on 52’. 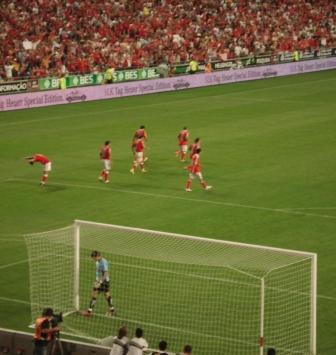 Rui Costa taking a bow after his quality strike! 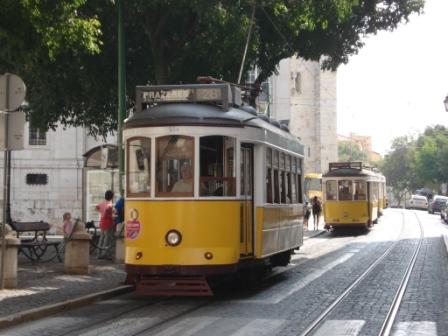 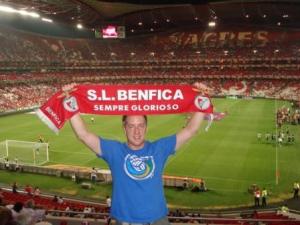