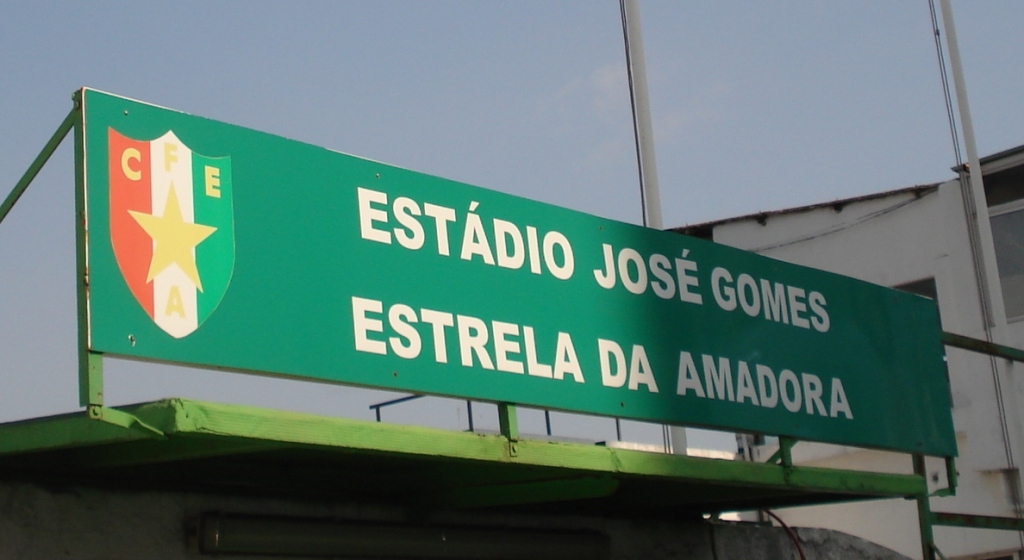 Prior to planning this trip, we weren’t aware that Estrela da Amadora was a football club based in Lisbon. Having discovered them in our pre-trip research (www.footiemap.com is a great website!) we were more than pleased when the fixture list threw up a derby against city neighbours Sporting. Ok, not the big Lisbon derby, but technically a derby!

This fixture was allocated the Sunday 7pm slot, and was the first of our day’s football double bill. Knowing very little about the club in advance, and unable to find out anything of real use from the clubs limited website, we turned up at the stadium unsure as to what the ticket situation would be. We had no idea what home attendances were like; would this be ‘all ticket’; or would Sporting just turn up in their thousands and take over the place?!

The Estadio Jose Gomes is located in the north western area of Lisbon, in a municipality called Amadora (hence the full club name). It’s a compact, 3-sided ground with a capacity of 12,000. There were a number of ticket booths situated outside the ground on Avenue Dr Jose Pontes, and it was surprisingly easy to pick up a ticket for this game.

It turned out that Estrela’s average home league gate rarely gets above the 1,100 mark. For this game there was a 500% increase on their average gate – the official attendance listed as 5,100. That turned out to be Estrela’s largest home gate of the 2007/08 season and it was made up mostly of Sporting fans. 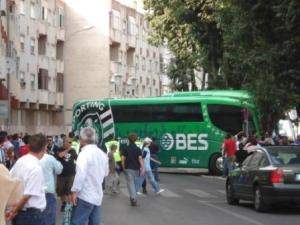 With tickets in hand, we then located a small local bar/cafe that was having a field day selling bottles of beer to the gathering of Sporting fans that were filling up the tight residential streets that surrounded the stadium. The Sporting team coach had difficulty snaking its way through the packed narrow streets, and also struggled pulling into the tiny stadium car park – the ultras in good voice as the layers left the coach – just in case the players forgot this was a derby!

One of the main Sporting ultras group is known as ‘Juventude Leonina’. You will notice their banners and flags at stadiums that Sporting play in, and it basically translates as ‘Youth Leonina’. Whilst we were outside the stadium enjoying a few beers that afternoon, we were approached by what appeared to be some other English guys who had decided to do the same as us. It turned out though that they weren’t English, but in fact three Portuguese Sporting Lisbon fans belonging to a smaller ultras group called ‘Grupo 1143’. They model themselves on the English hooligan style of the 80’s / 90’s, and were decked out in burberry, lacoste and stone island gear. They happily chatted to us about their ultras grou; their thoughts on Benfica; and were intrigued to find out more about English football – although i think they were disappointed me and Kev didn’t belong to a ‘firm’. 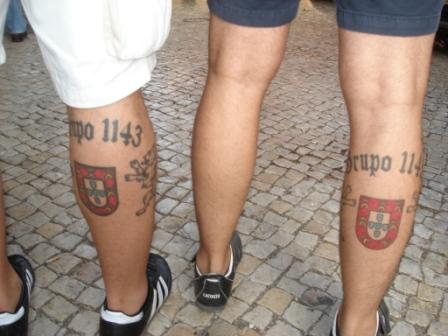 After sharing a few beers and tales of all things football with our new found friends, they invited us to stand in the away section with them. We tried to explain our tickets were located in a different part of the ground, but they were having none of it. After agreeing to join them in the away end queue (but all along thinking we wouldn’t be let in), we were surprised that after a few quiet words with the turnstile steward, we were stood in with the Lisbon ultras! 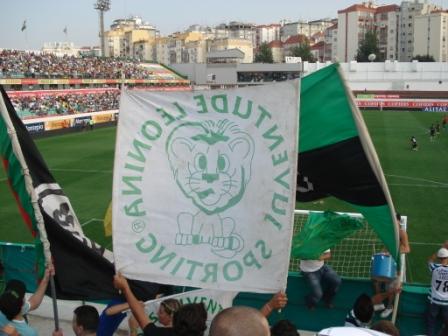 In amongst the ultras we took our place right behind the goal. They created a decent atmosphere and the chanting didn’t stop throughout the whole first half. It might as well have been a Sporting home game.

Estrela were a struggling side (both on and off the pitch) and offered very little threat to the Sporting backline. An early strike from Liedson on 8’ set them on their way, and this was followed by a second from Vukcevic on 29’ and it was pretty much job done by half time. The second half was more memorable for being in with the ultras than the football on display and the game finished 2-0 to Sporting. 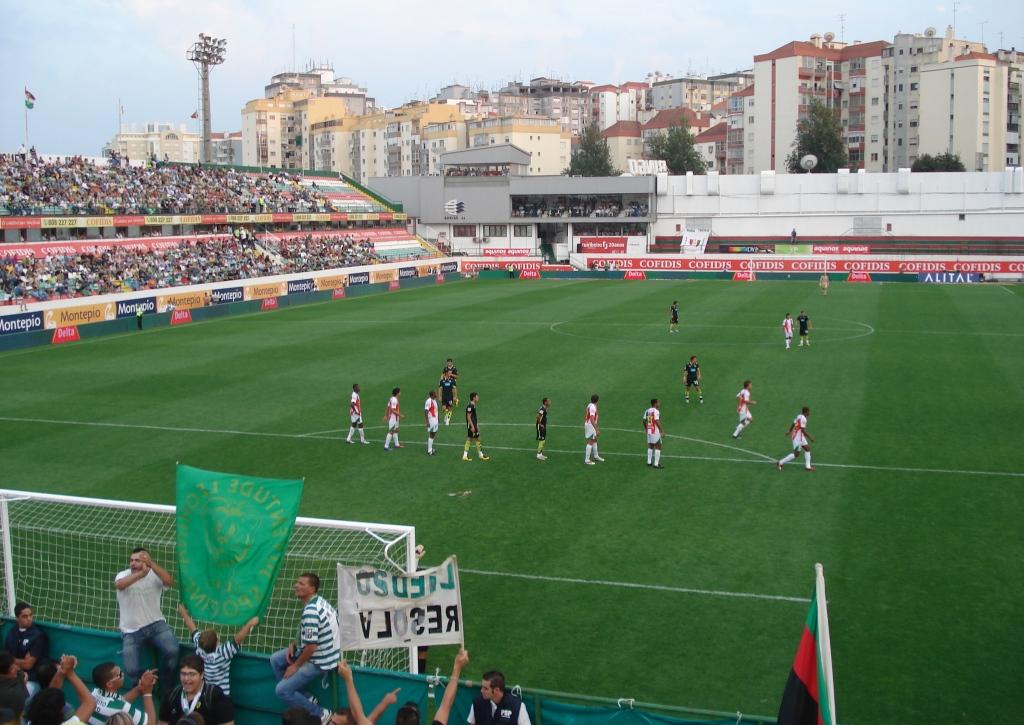 As the end of the game approached we thanked our ‘Grupo 1143’ hosts and made our way for the exit – we had to get away sharply to make the next match – a 9pm kickoff at Belenenses on the other side of town!

Estrela da Amadora FC folded in 2010. During the 2008/09 season the clubs financial crisis worsened which saw them relegated two divisions (despite finishing mid table). Although they finished 10th in the 3rd tier in the 2009/10 season, their financial problems persisted and they recieved a 2 year ban from all activity by the Portuguese Football Federation. That was the final nail in the coffin. 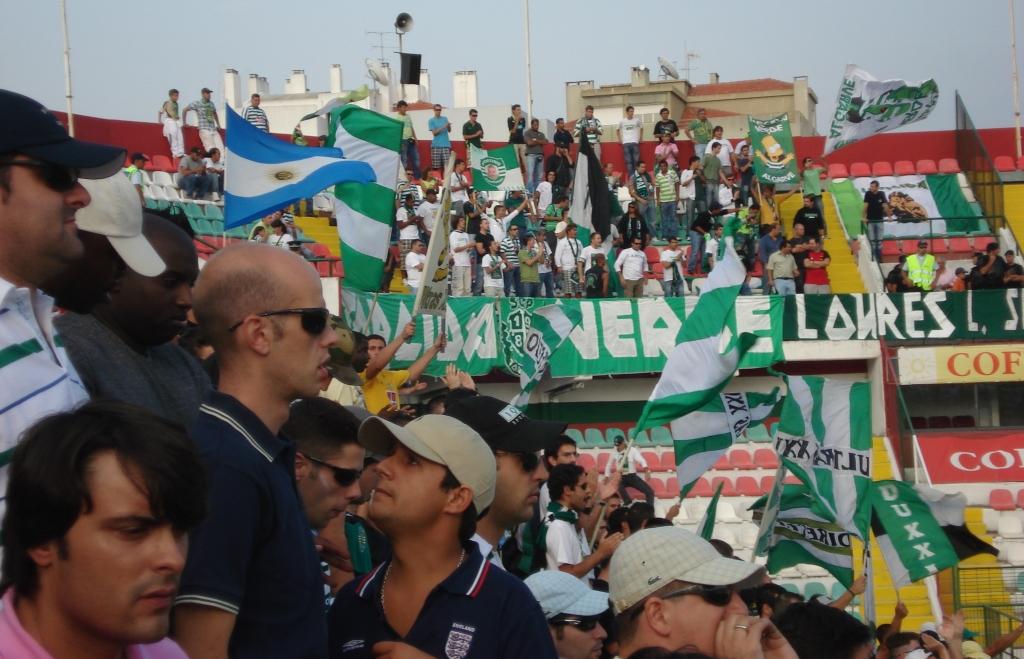 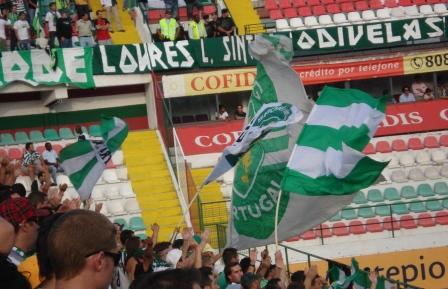 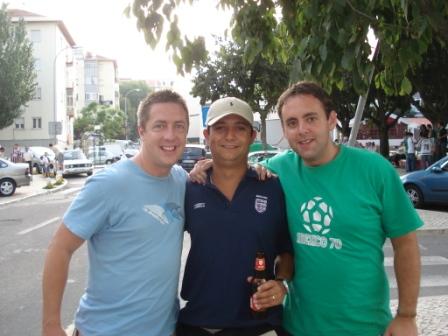