Leaving Lisbon behind we headed northwards on the 2 ½ hour train journey to Porto for their champions league clash with Liverpool.

Tickets had been pre-purchased via the official Porto website, thanks to a friend of a friend who had a Portuguese contact in London. He had kindly logged into the Porto site on our behalf to order and pay for the tickets. We were due to collect these on arrival at our hotel, and true to expectations a brown envelope was handed over to us on check in. On opening the envelope we discovered that our informed Portuguese contact had actually used my card to buy tickets for the wrong game – we now had tickets for Porto’s next home league game against Boavista the following week!

That threw a spanner in the works, and an earlier than planned visit to the Dragao was needed to try and pick up tickets. Luckily for us tickets were still readily available, and apparently Porto rarely have a ‘sell out’, even for the derby against Boavista or the visit of the big two from Lisbon. Worth noting if you’re ever thinking of getting a game in there!

With tickets sorted, we caught the tram back into town and spent the afternoon down on the ‘Cais da Estiva’ – a really quaint colourful area adjacent to the river Douro. A great place to enjoy a few drinks at any time of day – the area is full of riverside bars and cafes, a small piazza, and impressive views up to the Ponte Luis I bridge. It turned out to be a popular spot with the travelling Liverpool fans, and the red banners hanging from balconies and terraces added to the already vibrant colour of the place. 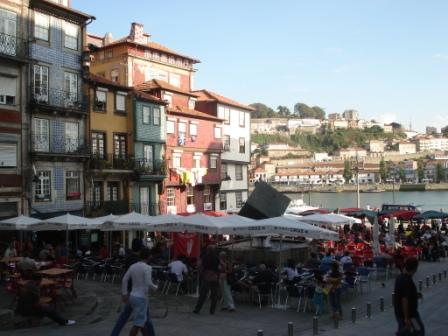 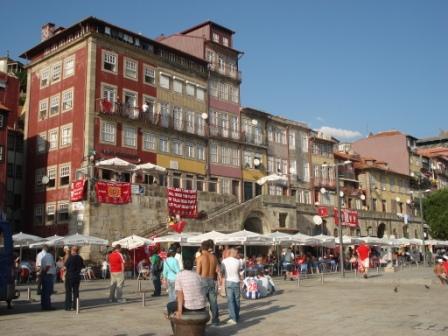 Beer and taxi’s were notably cheap in Porto – which was perfect for us – as they were one of the two main commodities we would be spending our euro’s on for the next couple of days of our visit! Sagres and Super Bock – the two national beers – were around 1.5- 2 euro’s a go; and taxi’s across the city centre were only a few euros more.

The Dragao Stadium is well connected to the city centre via an efficient tram network which drops you off very close to the ground. The Dragao is a modern stadium built in 2003 in time for the Euro 2004 tournament and has a decent capacity of just over 52,000. The two stands behind each goal are not enclosed – so you can see right out through to the outside of the ground which is quite unique for a ground with such a large capacity.

One of the Porto Ultras groups are known as the ‘Super Dragaoes’ and occupy the north end behind the goal. They are rumoured to be the largest ultras group in the country with a membership of approx 4,000; and as the teams emerged for the line ups and champions league anthem they unveiled a large banner with their ultras logo emblazoned across it. 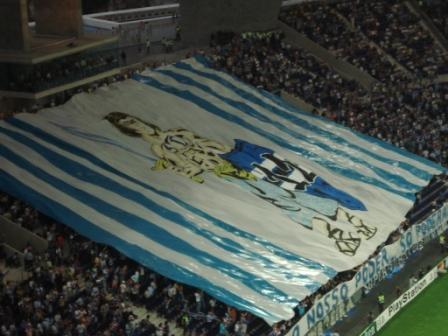 Liverpool’s team included new summer signing Fernando Torres, who on this particular showing looked to be a massive disappointment. Although he would go on to become a Kop favourite – his strike partner for the night Dirk Kuyt looked much more effective and the one most likely to cause Porto problems. His work rate on and off the ball was really impressive – quite the opposite for Torres – who looked disinterested during most of this game.

Liverpool really struggled in the first half and went behind early on to a Gonzalez penalty after 8 minutes. They were fortunate to go in at the break on level terms – Kuyt scoring a headed goal on 17’ – at least getting the goal his overall performance on the night deserved. Jermaine Pennant was shown a red card 60 minutes in, and strangely that seemed to kick start Liverpool’s performance somewhat – with more urgency and cohesion shown by the ten still on the field. The game finished one a piece, and Liverpool will have been more than happy taking back an away point; Porto will be kicking themselves that they didn’t take all three.

Whilst there are not as many domestic football teams based here as in Lisbon, Porto is definitely worth a short visit. The ‘Cais da Estiva’ riverside area alone is a great place to spend a few hours enjoying a few drinks and having a general mooch about; wine connoisseurs will love it in particular, as Porto is the home of Port wine (which is exclusively made in the city’s Douro Valley); sun-seekers will enjoy whiling the days away at any of the nearby city beaches. If that doesn’t get your juices flowing, then it also happens to be one of the cheapest western European cities I’ve visited.