Answers on a postcard….(or just scroll down to the bottom of this post!)

OS Belenenses – a multi sports club – is located in the Belem quarter of Lisbon, and is situated about 4 miles from the city centre at the mouth of the River Tagus. It’s a fairly picturesque part of the city with views out across the Tagus Estuary, and historical ‘sights’ to be had in the shape of Belem Tower and the Monastery of the Hieronymites.

The home of Belenenses, the ‘Estadio do Restelo’, is a fairly impressive looking stadium with a 29,000 capacity. Their average home gates were coming in at the 3,000 mark, except when they were hosting their larger city rivals and then the gates would swell to around 10-12,000.

The Monastery of the Hieronymites (stadium floodlights in the background)

After lunch and a few bottles of wine in the Belem quarter, we visited the stadium in the early afternoon, just to see if we could pick up some tickets early as we knew we would be rushing back from the Estrela da Amadora match and would be tight for time. As we walked towards the stadiums main entrance it was like a ghost town – no sign of life – everything seemed to be locked up, and this was about 6 hours before a Portuguese premier league match. As we wandered into the main entrance car park we noticed a gateway leading straight out on to the pitch was wide open. Obviously too good an opportunity to ignore, we wandered straight on in and within seconds were out on the playing surface.

A quick opportunity for some photos on this unusual chancing, and a spot of spontaneous ‘keepy-uppy’ with a mini football I’d had in my bag! A feint applause and cheer from the groundsman – and I’d had my moment on the big stage!

See you tube clip below:

Trying to fit in two Portuguese premier league games in 4 hours isn’t easy! We left the Estrela v Sporting game a few minutes early to give us a slightly larger window to make it across town for the Belenenses game. Outside the Estadio Jose Gomes, we were stood on a street corner desperately searching for a cab. After about 10 minutes of nothing, frustration started to creep in as we knew we were likely to miss kickoff. Finally, we managed to flag a cab down that was doing a ‘u-turn’ further up the road, and luckily he got us to our destination only 5 minutes after kick off. Rushing straight to the turnstiles with euros in hand, we were annoyingly sent back out to the roadside ticket booths to purchase tickets before being allowed into the ground. The section we had been dropped off at happened to be the ‘empty’ side of the stadium and we pretty much had the whole stand to ourselves.

A first half goal from Uniao de Leiria’s Jao Paulo (on 15’) sent the travelling away contingent of 26 that had made the 90 mile journey to Lisbon into wild delirium.

Unusually at halftime you are allowed to exit the stadium at Belenenses to take of advantage of the roadside burger vans for your half time refreshments needs, and then show your ticket to get back in for the second half. Half time was reason enough to leave and enjoy a swift ‘super bock’.

The second half saw a positive response from Belenenses and they turned the game round coming from behind to win 2-1 with goals from Paulista on 55’ and Alcantara on 72’.

Answer: Jose Mourinho’s second club as a professional player was Belenenses, where he played 16 times for them in the 1982/83 season. He went onto to manage the opposition – Uniao de Leiria for 6 months during the 2001/2002 season before his big move to Porto. 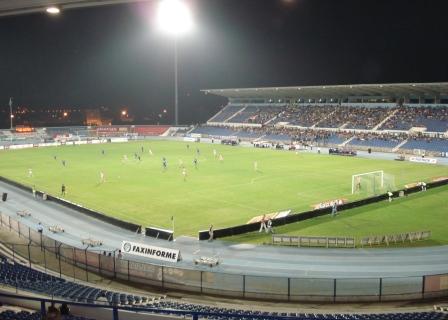 Kev nails his colours to the Belenenses mast!