The final leg of our trip was to the eastern coast of Spain and the city of Valencia. And what a city by the way!

Valencia gets off to a great start for merely being a city with a beach! With temperatures averaging 30-40 degrees each day throughout the summer months, the Malvarossa beach area (along with some football of course) is a good enough reason alone to visit Valencia!

If you want more from your visit you can immerse yourself into taking in the various sights and attractions on offer in the city, of which there are plenty. As a start, the following are worth a quick look:

1)    A stroll round the historical ‘Old Town’ which is situated off ‘Calle La Paz’ and ‘Calle San Vicente Martir’ (not far from ‘Colon’ metro);

2)    A visit to the modern ‘City of Arts and Science’ area, which is full of ‘space age’ looking structures (situated off Avda. Autopista del Saler)

3)    A walk along or around the now empty ‘Old River Bed of Turia’. The river has since been diverted away from the city, and the river bed that remains is now full of cultivated gardens, sports pitches, parks, playgrounds, fountains etc.

We spent most of the weekend chilling out on Malvarossa beach, which basically starts from the ‘port’ area and the nearest metro stop is ‘Las Arenas’ (Line 4). There are a number of decent beach front restaurants and bars on Malvarossa beach – and then adjoining this is the newly developed ‘port’ area.

The ‘port’ area ticks all the boxes when it comes to enjoying a good night out. Venture into the port area on a weekend night and there are plethora of open air bars and a young crowd partying the nights away! On the Saturday night we ended up in an open air terrace club called ‘Las Animas’ until 6am (which is right on the beach front) where the DJ closed his set to the sound of Fragma’s ‘Toca’s Miracl’ just as the sun was rising (you had to be there!!).

Not bothering to go to bed – we nipped back to the hotel to pick up the beach gear and ‘cabbed’ it straight to the beach. At approx 8.00am the beach was empty, and after passing out on two sun loungers, we were then awoken 4 hours later to the sound of screaming kids, noisy parents and a beach that was rammed!

After a day spent nursing hangovers from hell on the beach, we dragged ourselves to a beach side bar for a few ‘looseners’ in preparation for the first of the evenings two Spanish football offerings – Levante v Real Zaragoza in the ‘Segunda Liga’.

Levante was originally founded in 1909 taking their name from the “Levante” beach in La Malvarrosa. Local rivals Valencia were not formed until slightly later in 1919, and both clubs coincidentally have a ‘bat’ featured in their club crest. The origins of the ‘bat’ are not exactly certain!…but the ‘bat’ also features in the city’s coat of arms.

The 25,354 capacity ‘Estadio Ciudad de Valencia’, home of Levante is located in the north of the city, and the nearest metro stop is ‘Machado’. Travelling from the beach, the stadium is seven stops on the metro with an interchange on to ‘Line 3’ at ‘Benimaclet’. The stadium is an all seated open bowl shaped ground with one covered stand. As a ‘Segunda Liga’ side, attendances were fairly low and there was no problems picking up tickets shortly before kick off.

Levante are a club that can easily slip under the radar, out shadowed by their more illustrious neighbours Valencia. Referencing the club fact files there have been a number of high profile players that have worn the blue and red of Levante that you might not have been aware of previously, most namely:

With a 3/4 empty stadium and a 7pm Sunday evening kick off, the game had a laid back ‘pre-season’ friendly feel to it. Or maybe that was just how it seemed with a hangover and no sleep from the night before! Whilst it was enjoyable to be just sat there on a warm summers evening watching a bit of football, the game itself wasn’t that memorable. You win some, you lose some when watching the beautiful game! 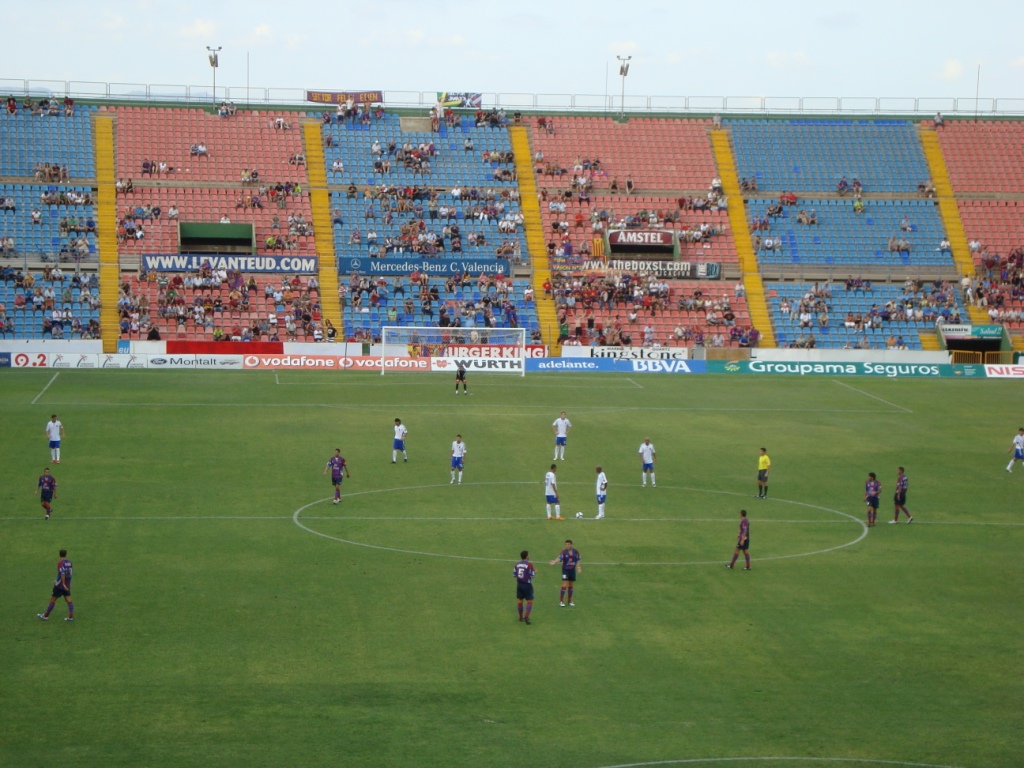 The stands packed ready for kick off!…

Levante won the game 2-1, with goals from Alexandre Geijo (11′) and Rubén Suárez Estrada (73′) giving them a two nil lead. A late penalty from Real Zaragoza’s Ricardo Oliveira (on 83′) gave the small travelling contingent something to get excited about and at least made the last 10 minutes or so more watchable in the anticipation that a draw could be on the cards. It wasn’t to be.

In many way’s Levante were the ‘warm up’ act for the evenings main event: Valencia v Mallorca. With that game kicking off at 10pm, we had to leave Levante like a “bat out of hell” to make it across the city to the Mestalla (sorry, I had to get a ‘bat’ link into the post somehow!).

Hungover, sunburnt, but ready for a slice of Levante!

The Real Zaragoza ‘coaching team’ make their way into the stadium!!