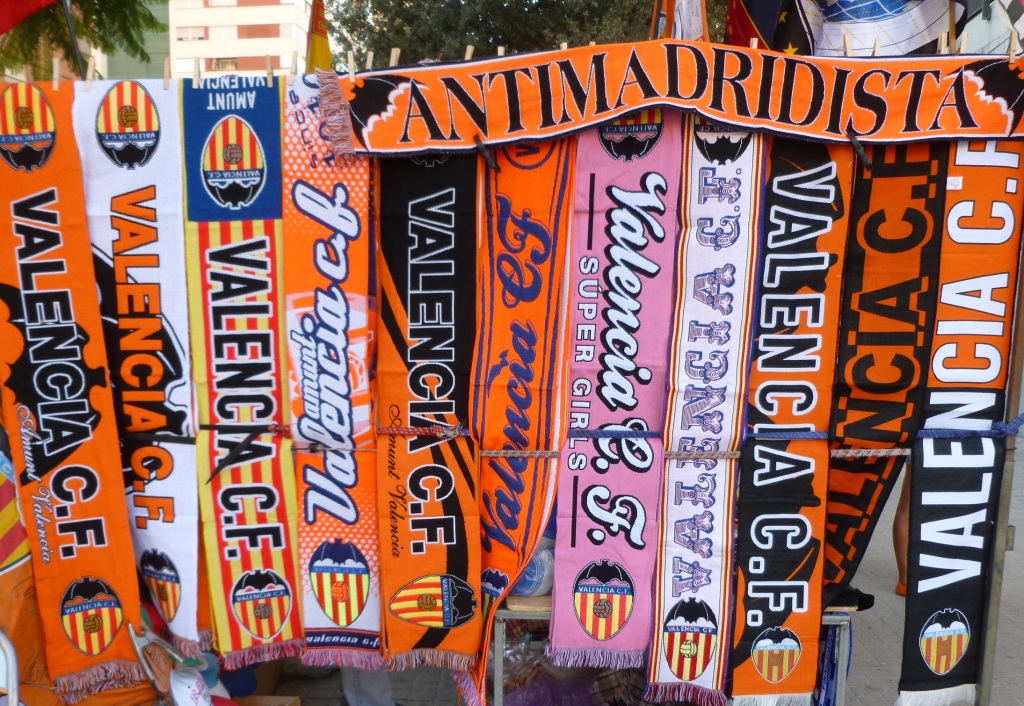 Cinema. Popcorn. Spanish football. Seeds. Just a light hearted observation, but I think ‘seed’ eating is to Spanish football what ‘pie’ eating is to English football! We had noticed the same ‘seed eating’ culture in full swing at the Vicente Calderon – seed sellers were everywhere, and the fans were buying bags of the stuff! Nutritionist’s will say the Spaniards have got it right with their ‘healthy’ match snack option, but for me, I wouldnt be happy if that was all that was on offer down at Roots Hall!

20 minutes after leaving the Estadio Ciudad de Valencia we were stood outside the illuminated ‘Mestalla’ in good time for the nights second game, Valencia’s La Liga clash against Mallorca.

The Mestalla is located fairly close to the city centre, and is easily reached either on foot (by crossing one of the bridge across the ‘old river bed’), or by metro – the nearest stop is ‘Aragon’ which is a 2-3 minute walk away. If you’re lucky like we were, and get two games in one night, the ground is only a four stop metro ride from Levante, with a quick interchange needed at ‘Alemeda’ on the red line.

The ‘Mestalla’ had long been on my ‘bucket list’ of clubs / stadiums to visit. It’s always looked a really imposing ground on TV, and as you walk up ‘Avenue Aragon’ from the metro the sheer size of the stadium amongst the residential apartment blocks is impressive. 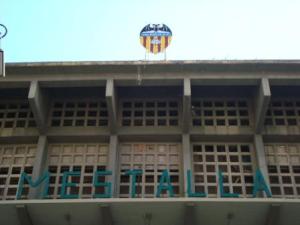 However as you get closer you can’t fail to notice the shabbiness of the exterior. The place looks like it could fall down at any moment. There is nothing fancy about the external structures of this ground – in fact it’s basically a ‘no frills’ construction of concrete blocks – some of which don’t look strong enough to support what they are supporting!

usually easy to purchase either a day or two before the game, or even an hour before kick off like this one (certainly for the lower category fixtures anyway). There are a number of ticket windows located on the corner of ‘Avenue de Suecia’ and ‘Calle Dr Juan Regia’ on the south west side of the stadium, and for the non Spanish speaking, there are ‘plans’ of the stadium that you can point to show where you want to sit!

A seat up in the gods is reasonably priced, and we paid about 15 euro’s for the privilege. Not bad for the Spanish equivalent of the premier league, you don’t get these prices down at Southend!

The streets around the Mestalla are busy before kick off – with many of the small cafe’s / bars unable to cope with the crowds as fans spill out onto the streets enjoying their pre match espresso’s, or in our case ‘estrella’s’! If you’re thinking of heading into the ground early, don’t be fooled by the huge ‘Estrella’ advertising splattered all over the exterior of the Mestalla…stay outside the ground as close to kick off as you can, as the beer inside the ground is non alcoholic!

The climb up to the upper 3rd tier is not for the feint hearted. After a week’s drinking, eating shit food, and laying around on beaches it’s doubly difficult! It felt like my heart rate was near my VO2 max by the time I got to the top!

The stands are steep, but in the 3rd tier especially they seem steeper. So much so that each row of seats has a metal bar positioned in front of you – seemingly a health and safety measure to stop you falling out of your seat onto the tier below!

Valencia has a small ultras group, which take up a small section at one end in the ‘Sillas Gol Sur’ (south stand). The section is a small enclosed area between the corner flag and the goal, and generally the only real chanting and ‘atmosphere’ seems to come from this section.

The atmosphere was pretty flat for this match – and in many ways’s Valencia has a ‘family club’ feel about it. Not that that’s a bad thing, but aside from the ultras section, the fans seemed pretty laid back, and were just as interested in working their way through endless bags of sun flower seeds as they were watching the game! Comparable to sitting next to a row of human squirrles, the stands are awash with seed shells after 90 minutes!

Despite their recent financial problems, Valencia still had a pretty strong first team that featured players such as Baraja, Albiol, Albelda, Mata, Villa and David Silva. Not short on attacking and creative options, Valencia put Mallorca to the sword in what ended up a comfortable 3-0 victory on the night. Goals from David Villa (34’), Mata (38’), Vicente (82’).

On this showing, and following his ‘top scorer’ accolade from Euro 2008, it can’t be long before one of the ‘big boy’s swoops in on David Villa – in all honestly Valencia will probably welcome a move if the price is right to ease their own money troubles.

Valencia is a fantastic city and definitely well worth a visit. If you don’t get lucky and get Valencia and Levante drawn at home on the same weekend, don’t forget that Villareal and Hercules are close by as alternative football options. In summary though, great nightlife, better beaches than Barcelona, and more picturesque than Madrid! Get amongst it!