Two years on from that miserable night in Zagreb and the ‘Maksimir miss-kick’ (reference earlier post from 2006) and we were heading out to Zagreb once again – this time for England’s second away game in the 2010 FIFA World Cup Qualifying Group. England’s group included Croatia, Belarus, Kazakhstan, Ukraine and Andorra and would throw up some interesting away trips during the campaign.

With Wizz Air no longer flying daily to Zagreb from London Luton – we booked the cheaper in-direct option, and flew out to the southern coastal city of Split with Easyjet first, and then caught an internal Croatian Airlines flight onto Zagreb. The itinerary would allow for a few hours in the afternoon to explore Split. When I say ‘explore’ we basically restricted the exploration to the Marina and waterfront bar area! 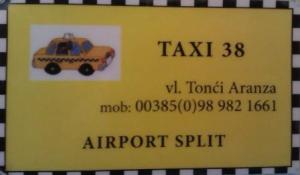 Our cab driver for our transfer into Split was a guy called Tonci Aranza (Taxi 38). I dont usually recall airport cab transfers, but our driver was as entertaining a cab driver as you could wish for. A big football fan and an even bigger fan of British comedy – Only Fools & Horses being his personal favourite. He enjoyed the opportunity of showcasing his cockney impressions to his English audience and in particular his Boycie impression of “Marrrr-lene” had us in absolute stitches.

Dropped off in the picturesque old town, we wandered down through the cobbled streets to the Split Marina area just off the roads of ‘Obala Lazareta’ and ‘Obala Hrvatskog’. Along here and just before the main Marina section there is a pedestrianised waterfront area with many restaurants and bars. It was a blazing hot September afternoon with not a cloud in the sky – perfect to catch a few rays and enjoy a few cold Ožujsko pivo’s on the water front. Our brief stop off in Split flew by – and before we knew it was time for Tonci “Boycie” Aranza to deliver the return leg taxi transfer back to Split airport.

The flight from Split to Zagreb takes 50 minutes, and we landed at around 6pm. With the game kicking off at 9pm local time, there wasn’t a lot of time to kill. A quick bag drop at the hotel, and then back into the waiting cab we headed straight on to the Maksimir Stadium with time for a few more ‘pivo’s’ before kickoff. After the previous visit here, where Croatia delivered England a footballing lesson, there were more than a few anxieties amongst the supporters.

Having said that there was a hint of optimism as well, as there was a new manager in charge of the national team – Fabio Capello – who had replaced Steve McClaren after his failure to qualify for Euro 2008. Whilst Capello had overseen four wins, one draw, and one loss in his first six games, only one of those was a competitive match, and that came against Andorra – hardly a benchmark to measure progress.

Ironically the 2-0 win against Andorra in Barcelona four days before this game, was a lower scoring game than the Andorra match from two years previous. On that particular night there was a torrent of vitriol thrown towards McClaren as the team struggled to break down the Andorran’s – tensions escalating off the back of a dismal defeat against the Croatians a few day’s before that.

What was actually to follow was unexpected to say the least. A magnificent performance – that was full of pace and attacking invention – saw England inflict a first competitive defeat on the Croatians in their own back yard. And this wasn’t any old defeat, but a 4-1 hammering. There was a sweet feeling of redemption stood in the away end that night – and a sense of building optimism amongst fans that Capello could finally be the ‘one’ to get the best out of this under achieving England squad!

Theo Walcott had a night to remember. Replacing David Beckham in the starting line up, Walcott, at 19 years of age, became the youngest ever player to score a hat-trick for England. His pace frightened the life out of the Croatian back line, and I have to say his finishing was clinical that night as he scored two well taken goals from the angle.

Aside from a flurry of goals, England’s all round team performance was equally impressive, as for the first time in a long time they demonstrated that they can actually play at pace, with incisive movement and maintain possession of a ball.

Walcott scored England’s opener on the night on 26’ to give England a one nil lead at the break. Robert Kovac received his marching orders on 53’ for an elbow on Joe Cole – and that aided England as the game opened up even more. Second half goals from Walcott (59’ and 82’) and Rooney (63’) rounded off a superb win.

After the 4th went in, there was a brief moment where we (and a few others around us) ‘lost it’ as we removed our shirts in celebration. I can honestly say I have never done that before at a football match, but caught up in the adrenalin and excitement of the moment it seemed like the right thing to do!  It was a great away win in a notoriously difficult place for teams to get a result, and to be honest its not often fans get that kind of buzz after watching 90 minutes of England play!

With the following day to kill in Zagreb, we took in a few sights – me fulfilling the tour guide role for Mark’s benefit – and then headed on to the ‘Street of a Thousand Bars’ to continue the celebrations from night before. It was during a bar crawl here that optimism and positivity about our national team started to build as the beers flowed. We were already planning our trip to South Africa – 21 months before the tournament and with 8 qualifying games to go!!