Despite the rich and lavish lifestyle associated with Cannes, the opposite can be said of the local professional football club AS Cannes. They have fallen on hard times in recent years, and currently ply their trade in the Championat National, the 4th tier of French football. It wasn’t always that way, and they are a club that have fallen from grace somewhat – featuring in the quarter finals of the UEFA Cup back in 1995 and competing in Lique 1 in the 97/98 season.

My visit to Cannes was work related, and I was there for an Under 11 International Youth Football tournament which was being hosted by AS Cannes. We had brought over a Borough under 11’s team to play in a 48 team, two day tournament that included a mixture of French academy teams such as Paris St Germain, Nantes, Nimes, Bastia, Montpellier and Metz, and a host of other local youth football clubs.

We arrived on the Friday on the eve of the tournament, and were informed by club representatives that AS Cannes had a first team game later that evening. Never one to pass up an opportunity to watch football on foreign soil our evening itinerary was adjusted to accommodate the match!

Whilst AS Cannes are one of the lesser known teams on the French Riviera (living in the shadow of more illustrious neighbours such as Monaco, Marseille and Nice), they have developed a reputation for having one of the best youth academy programmes in Europe. Many talented young players have come off their production lines and have since gone on to make big names for themselves, including: Zinedine Zidane, Johan Micoud, Patrick Vieira, Gael Clichy, Anthony Le Tallec, Sebastien Frey, Jonathon Zebina and David Bellion.

Zidane – AS Cannes most famous export?!…..

The academy and youth development programme works differently at AS Cannes in comparison to what I’ve witnessed at English clubs; and I think it is a model shared by many other French clubs as well.

The main difference appears to be the structure. AS Cannes’ youth set up is very similar to many grassroots junior and youth football clubs in England. Certainly in the younger age groups (age 6-13’s) they can have up to six representative teams at each age level. This allows for players to move up and down through the teams depending on their ability level and rate of development; but essentially they still remain at the same club irrespective of whether they are one of the best players or not at any given time.

This structure naturally creates a more family / community approach to the youth set up, certainly at the younger age groups of 6-13. The 1st team in each age group has the more advanced players in it and trains more often than the others. The 6th team in the age group will focus more on participation – however there is a collective spirit amongst the different squads at each age group.

Compare this structure to England, where the academy system generally operates on an annual basis with a restricted number of players in each age cohort for each season. Young players are hired and fired each year depending on their performance and development during that particular season. For example, if a young player at 9 years old doesn’t develop at the right pace deemed appropriate by the club, the said player can easily be released from the academy set up without a second thought. This leaves the young player and his parents with two options; either another club will come in and take a look at the player; or he returns to local grassroots youth football and plays recreationally.

Using that same scenario at AS Cannes, if the 9 year old player drops out of the first team squad, he is still kept within the club set up – he might spend a year playing in the 2nd team for example. The player will have the opportunity to regain his place in the 1st team if he improves later down the line; and conversely if his level deteriorates he might drop down to the 3rd team. This structure allows for things like rate of development and players physical growth to be taken into consideration, but provides continuity for the player by keeping them integrated within the club.

In England, I wonder how many ‘small’ but technically gifted players get released at a young age purely because the decision to keep them is more closely linked to their physical capabilities at that time. The physical growth of young players takes place at different stages, and late developers can often be overlooked as they cannot cope with the physical nature of the game at say 14 years old if they are playing alongside other boys at 14 that have developed early.

Aside from the technical coaching, I’ve always felt the AS Cannes structure allows for the growth rate of young players to eventually come out in the wash. That same player that might have been released at 12 is still in the set up and still feels part of the club, and essentially still has a chance to develop and improve later down the line.

With the catchment area of English club academies ever expanding this strucutre may not be practically possible to manage; but i cant help but think that we could learn something from the set up out in France. I’m sure there are many examples of current professional players being released early by clubs because they were deemed too ‘small’ at a certain point in their development, only for them to go on and make it big somewhere else. Its well documented that David Beckham was released by Tottenham as a youth player; but went onto bigger and better things with Manchester Utd.

Cannes – Home of the Film Festival

Cannes is a lively and popular coastal town, famous for its annual Film Festival where the world’s leading actors converge on the town for 2 weeks during May-June each year. Our annual visit to Cannes often coincided with the Film Festival and during this time there is more money than sense on show here, and it’s worth visiting just to see how the other half live!

A cinematic mural in central Cannes – how many film characters can you spot!?….

The Croisette (or centre of Cannes) is a good place to start. The nearby marina full of multi million pound luxury yachts; the quay side full of bistros, bars and restaurants; and the streets north of the Palais des Festival lined with designer stores. If ever a place became about status symbols, Cannes, during the film festival certainly ticks the box!

The view down over Cannes Marina…

However if you can turn a blind eye to the rich trappings Cannes is actually a fantastic place to visit for a short break. With a great climate, half decent beaches, quaint back streets, cafes and restaurants galore, and the cities of Monaco and Nice also close by it’s a good place to stop off for a few days.

The Stade Pierre de Coubertin (home of AS Cannes) is located in the La Bocca area of Cannes – which is about a 5-10 min cab ride from the centre. The stadium has a 12,000 capacity, and with home gates rarely creeping above the 800 mark getting a ticket for the match isn’t a problem.

The ground is visually impressive for a 4th tier club. It has a large two tiered main stand opposite the dug outs (east tribune); the ‘green tribune’ (or west stand) is a smaller seated stand that also houses the club president and the media; a home terrace with a ‘red guerillas’ graffiti back drop (or the north tribune); and a temporary stand at the other end (south tribune). The ground has a number of palm trees surrounding it and the clubs academy and training ground facilities are built into the same site.

The tatty exterior to the West Stand…..

As guests of the club we were given free entry into the stadium and were sat in the West stand. After taking our seats and quickly surveying the starting line ups, there was one player that unexpectedly stood out from the rest – and that was the unmistakeable frame of the Czech Republic international striker Jan Koeller – who I’d seen score in the 2006 World Cup 3 years earlier against the USA in Gelsenkirchen. 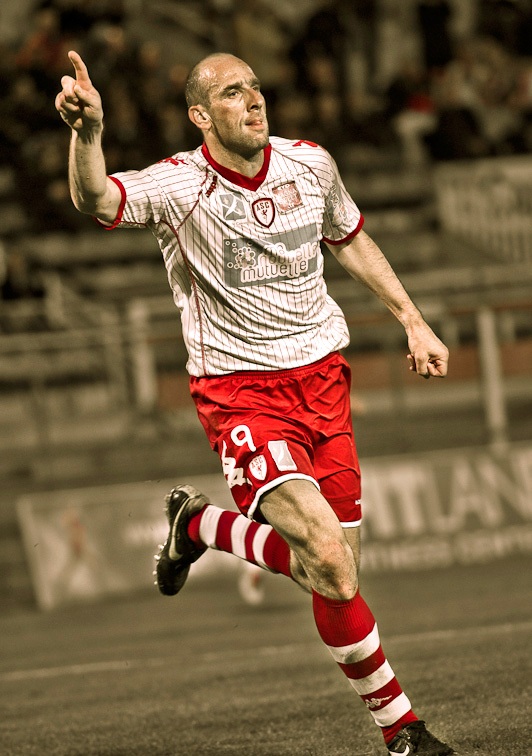 Czech legend Jan Koller in action for AS Cannes in French 4th Division!….

It was surprising to see a player of his stature playing in the French 4th division. I can only assume it was his final career move before he hung up his boots, and the chance to enjoy the trappings of a lavish lifestyle on the French Riviera and continue playing a bit of football was too good to turn down!

He had signed for AS Cannes in January 2010 from Russian side Krylia Sovetov Samara, and certainly wasn’t here for the money. AS Cannes have hit hard times in recent years and with average home gates of 500-800 he surely couldn’t be earning the big bucks; maybe just spending the big bucks earned from a decent career at clubs such a Sparta Prague, Anderlecht, Borussia Dortmund, Monaco and Nuremberg!

On this particular showing he was a cut above everyone else at this level and was a constant thorn in the Rodez side. A commanding display that seemed to take little effort saw Koller score his side 2 goals in a 2-1 win.

The next morning we noticed that the Rodez players were staying in the same budget hotel that we were – the 3* Kyriad in La Bocca. Who says the life of a professional footballer is glamorous!!