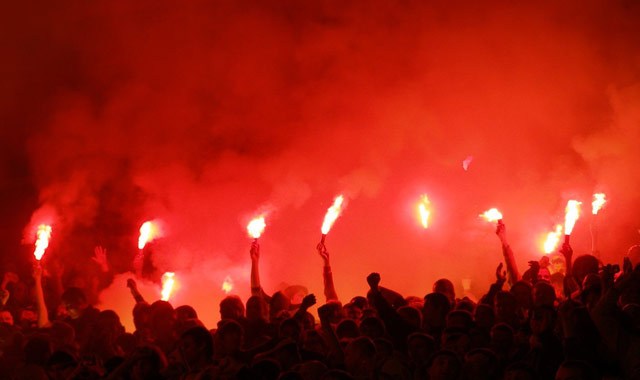 England’s final away qualifier of the 2010 World Cup qualifying campaign against Ukraine would have usually been played in Kiev at the Olympic stadium. But as part of the countries preparations to host Euro 2012 the stadium was closed for refurbishment.

We had booked up initial flights out to Kiev and awaited confirmation from the Ukrainian FA as to the new venue before finalising our onward travel plans. Kharkiv and Donetsk were touted as potential venues, but the game ended up being hosted in Dnipropetrovsk. I think at the time Dnipropetrovsk was still on the short list as a potential Euro 2012 host city, and maybe the game against England was the litmus test to see if it could cope with a ‘big game’?

To this day I still don’t know how to properly pronounce ‘Dnipropetrovsk’, and as such I will make it easier for all reading this blog by referring to it as Dnipro!

Dnipro is and industrial city located about 250 miles southeast of Kiev on the Dnieper River, in the south-central part of the country. The city was one of the key centres of the nuclear, arms, and space industries of the former Soviet Union.

Ukraine is not famed for its transportation and highways infrastructure, and rather than brave a long coach journey on dodgy roads we decided to stump up for the additional one hour flight transfer from Kiev to Dnipro.

There were three of us on this trip: Mark, Morgo and myself; and we arrived in at Kiev’s Boryspil airport from London at about 2pm. With our connecting flight to Dnipro not scheduled until 8pm we had a good few hours to kill. Boryspil airport is located about 20 miles from Kiev city centre, so rather than a rushed excursion into town, we opted for a laid back afternoon in a small bar that was located outside Terminal B. It was a pleasant sunny October day – and seemed the perfect venue for an afternoon of al fresco beers. 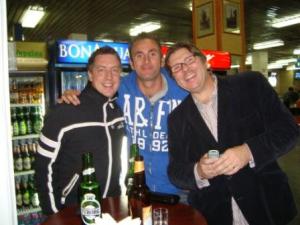 Me, Morgo and Mark inside Terminal B

By the time we checked in for our Dnipro flight some 4 hours later we were well on the way, and the flight provided a much needed break from the beers, and in an hour’s time we would need to gain a bit of focus to get through security and onto our hotel.

We had pre-booked a taxi through an online agency just to make our transfer into the city a bit smoother, and we were greeted in arrivals by a middle aged lady who luckily for us spoke some broken English!

Prior to arriving here, available hotels seemed few and far between – certainly ones that were pre-book-able on the internet! With England in town prices soared to ridiculous levels and it had proved difficult to find anywhere that had available accommodation at a half decent rate.

After getting nowhere with the usual ports of call (expedia, opodo, hotels.com, booking.com et al) I stumbled across an agency based in Pakistan that was offering rooms in a hotel that I had seen nowhere else on the internet. Although slightly anxious at handing over my credit card details to the said agency, the gamble paid off and we ended up staying in a picturesque security gated complex consisting of attractive wooden chalet apartments complete with onsite restaurant and bar.

It was a pleasant surprise, as we had stayed in some shit holes on previous trips to eastern Europe and this place looked like it should have been in Austria and not Ukraine!

With the match not taking place until Saturday evening we had a full day on Friday to explore the city. Our accommodation was located on the outskirts of the city, and with no access to the internet or a map we had no idea of how to get into the city centre from there!

As we walked close to the hotel and adjacent to what looked like a 6-lane highway (minus the road markings!) we tried to keep an eye out for a taxi that we could flag down. We noticed many minibuses stopping at the roadside and picking people up –clearly these were the cheap way of getting around town – but with our lack of Russian language ability it wasn’t obvious where each was going or how these operated.

Eventually we stopped a girl in her twenties that was approaching us in the vain hope she might speak some English! Luckily she did, and she went beyond the call of duty to help us locate a taxi! 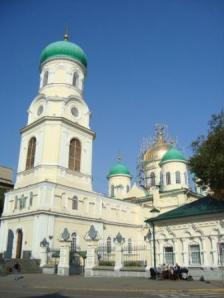 We were dropped off at the ‘Holy Trinity Cathedral’ – one of the many orthodox churches dotted across the city – and on first impressions it was a rare splash of colour in what had so far looked an otherwise ‘grey’ and drab looking place.

A short walk from the cathedral and you reach Lenin Square which marks the city centre. Lenin’s statue overlooks the main street – Karl Marx Avenue which is a pleasant tree lined boulevard – and this intersects Lenin’s Square and Central Square which is the main shopping area.

during the ongoing industrialisation, and on first glance the area is pretty run down and uninspiring.

The lack of places to see in the city centre was confounded by our inclusion of a ‘dry run’ to the Dnipro Arena. The stadium is located fairly close to the centre, and if you head south west from Lenin Square and turn down Lenina Street or Sjerova Street off Karl Marx Avenue, the stadium is only about a 10 minute walk away.

The ground was opened in 2008 and is home to club side FC Dnipro. At the time the Dnipro Arena was one of the first modern new build stadiums in the Ukraine. Many new grounds would follow in Kiev, Donetsk and Kharkiv ahead of the Euro 2012 tournament replacing the classic eastern bloc stadiums of old. Remember those intimidating open bowl like grounds in Donetsk and Kharkiv that have hosted Man Utd, Spurs and Everton in recent European club competitions? 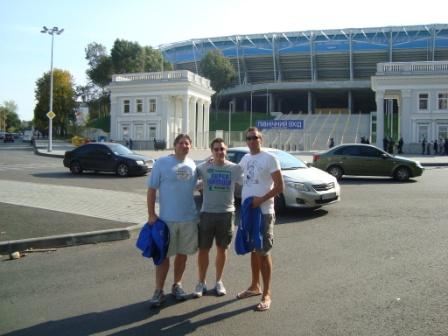 After a quick visit to the Dnipro club shop we headed back into the centre, and the inevitable attempt to delay the first beer of the day was over. It was a warm October day in Dnipro (shorts and t-shirt weather in fact!) and this provided the opportunity for some Ukrainian street drinking in Central Square. Cold beers from street vendors were little more than 50p a go and we enjoyed a few hours sitting in the square taking in the autumn sunshine and watching the world go by. 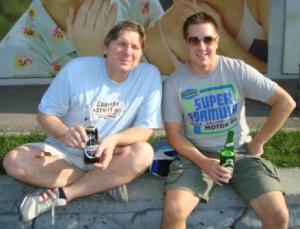 Tuborg’s all round in Central Square…

One thing we had initially noticed on our walk around the city centre was a lack of ‘visible’ bars. It was shades of Belarus all over again! With the rest of the afternoon spent in Central Square we popped back to the hotel to freshen up and change attire for the Friday evening, and then headed back to Karl Marx Avenue to survey the nightlife scene. 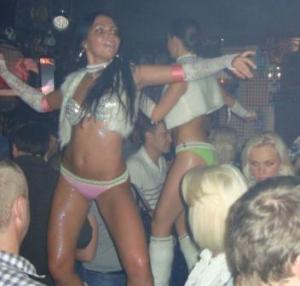 There appeared to be very little in the way of choice, but as we headed eastwards we stumbled across what looked like an entrance to a basement bar. As we anxiously walked down the steps we weren’t sure what we were entering. Despite initial concerns that we might be entering some form of a brothel or mafia den we passed through the red curtains that covered the doorway and were surprised to see a decent looking basement bar unfold before us.

Although it was quiet when we first walked in, the place was packed an hour or two later. With a laid back atmosphere; DJ’s playing house music; the dancing girls out in full force and beer and vodka at cheap prices, we had stumbled across a gem and it made for an entertaining first night in Dnipro!

Waking up late on the Saturday after drinking into the early hours the night before, we headed back into Dnipro ahead of England’s 6pm kick off against Ukraine. The pre match build up spent in TGI Friday’s – a chance for a decent ‘western’ meal and a few ‘looseners’ to ease off the hangovers before the big game.

Entry to the stadium was an experience in itself. As home and away fans poured into one of the gate entrance areas situated off the street, there was no segregation and a bottle neck built up ahead of the security cordon. Fortunately there was no trouble between the supporters despite the increasing impatience and the uncomfortable nature of the wait to get in.

No segregation and the crush to get into the stadium!….

There was a real danger of a human crush though as fans continued to enter the bottle neck from behind. The pressure of bodies pressing against each other building every second as the security check point seemed to take an eternity to let people in. Finally squeezed towards the front we were relieved to make it through the security checks and into the stadium.

The game itself was played in an impressive, albeit slightly hostile atmosphere. The Ukrainian ultras that occupied the opposite end of the ground unveiled a series of banners throughout the match, and let off quite a few flares in what was an incident filled first half. 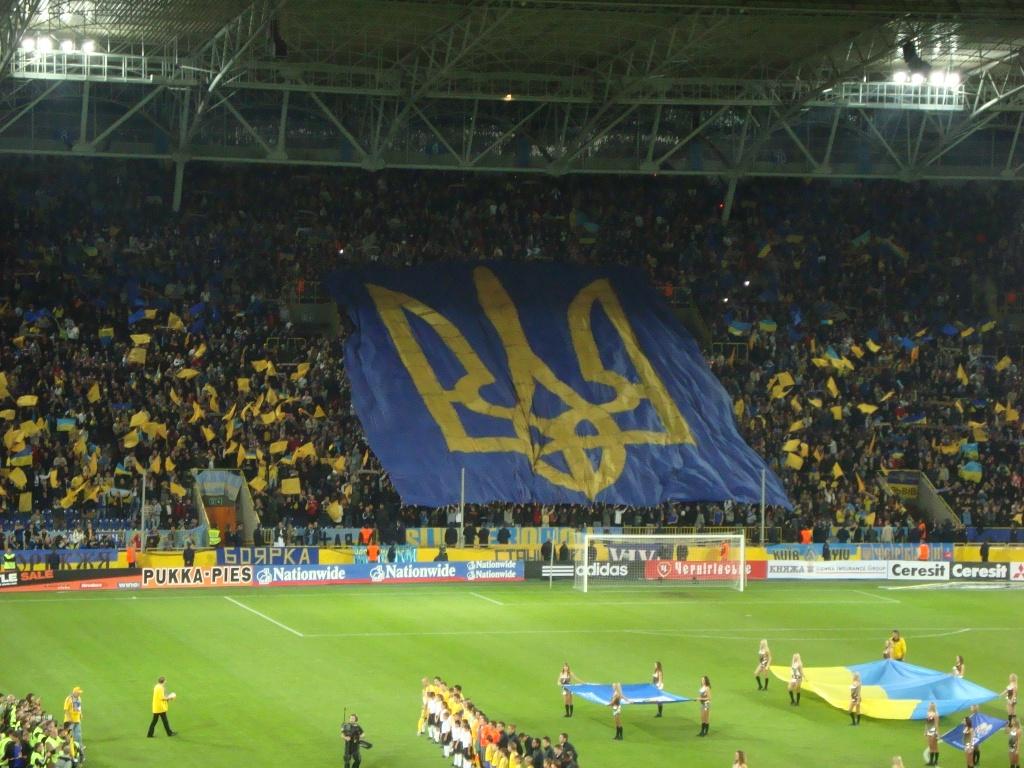 Flares are rarely on show at English stadiums, but there’s something about them that always adds spice to an atmosphere and they create a great visual backdrop to a game of football. The problem with them arises when fans then decide to throw them at players or onto the playing surface!

Robert Green seemed to be the chosen target in this instance and a number of flares landed around his feet.  At one point the referee threatened to abandon the game if the ultras threw any more flares on to the pitch after a second hold up in play in the first half. The game was barely 10 minutes old!

Robert Green pelted with flares from the Ultras….

Ironically it was as if the ‘flare’ situation played a part in Robert Green’s sending off, as moments later he brought down Milevskiy on the edge of the box. It was going to be doubly difficult now with 10 men here, but we regained feint hope after Shevchenko stepped up and missed the resulting penalty!

Ukraine did get the breakthrough after 29 minutes though, Nazarenko let fly from 25 yards out and his well connected strike deflected past a helpless David James.

On the whole it was a decent England performance in difficult conditions, and despite the loss, the early work done by England in the group was enough to see them still comfortably go on and win the group and qualify for South Africa 2010.

With England fans locked in for an hour after the final whistle, it was left to the Ukrainian cheerleaders to provide some impromptu entertainment for the fans. The England band serenaded the girls with music and they seemed to enjoy a second moment in the spotlight by performing a number of routines for their foreign audience:

In all honesty we could have done with heading home on the Sunday – but instead we had another full day to kill in Dnipro. With little left to do, we ended up in a restaurant for six hours, during which point we enjoyed two meals and a number of afternoon beers.

After each round we were provided with what looked like Ukrainian monopoly money – but it turned out these could be ‘cashed’ in for more drinks. After six hours the vouchers we accrued gained a few extra free drinks which we could have probably done without! Suffice to say by the time the evening came round we were back in the ‘no name bar’ for a 3rd successive night….if it isn’t broke don’t fix it! 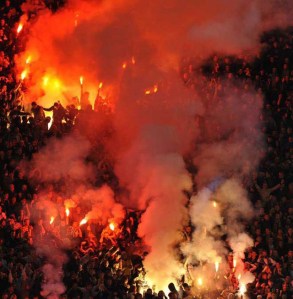