In the second article from Iain Pearce’s Brazilian Easter weekend double header, we head to the Estadio Independência in Belo Horizonte….

The day after the trip to Nova Lima for the Cruzeiro match, Belo Horizonte offered up Atlético Mineiro at home to Tupi and this time I’d be on the side of the favourites, hoping for a Galo (The Roosters) home win.

As sometimes happens in the wide and wonderful world of the football family a friend of a friend of an English friend knew an Atlético fan and after some exchanged e mails a date and time for meeting was set, it’s terrific when that works out.

When talking of Belo Horizonte’s football there is a third wheel that looms almost as large as the city’s two famous clubs. The Mineirão, built in 1965, not only elevated its tenants Cruzeiro towards the status they hold today, but was for decades in the Brazilian shadow only to the mighty Maracanã, with a record attendance of more than 132,000 set as recently as 1997. However, as with its Rio cousin, next year’s World Cup has had its modernizing effects and the capacity in the now re-opened and newly revamped Mineirão is down to almost half of its former glory.

Whilst the Minerão was having its face lift the Belo Horizonte’s big two shifted across to the Estádio Independência, another newly reconstructed stadium closer to the city centre. But the place has as much, if not more, history as its bigger brother.

Before coming to Brazil the name Belo Horizonte rang just one bell in my mind. The name stuck because it was here that England lost 1-0 to the USA in the 1950 World Cup, a result so unbelievable at the time that back home the English newspapers assumed a mistake in their received telegrams and printed the score as a 10-1 England victory, so unable were they to comprehend the true scoreline. English football and arrogance, bedfellows as ever.

That fabled game took place at the very same Estadio Independência. However, in the last few years the former three-quarter bowl has been demolished and replaced by a thoroughly modern three-sided stadium, but a certain character has been maintained with one end remaining empty and instead housing the changing rooms and a roofed stage (see photos below). 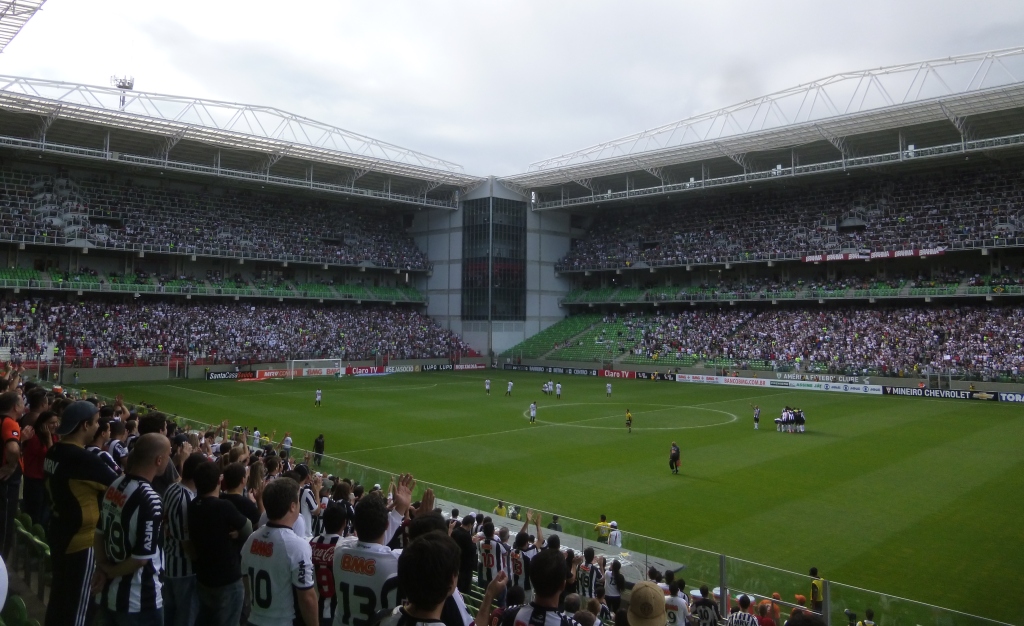 Across the city the Mineráo has reopened and Cruzeiro have moved in, but Atlético have decided to stay at the Independência for the time being, and having remained unbeaten in their first twenty-six games there who could blame them.

Only five years ago Atlético were relegated from the Brazilian Serie A for the first time, and as happens worldwide the sponsors and star players left with the top tier status. However, at the outset of 2013 Galo and their supporters are filled with a renewed hope. Last year they finished the Campeonato Brasileiro in second spot behind Fluminense and they have made a strong start in this year’s Copa Libetadores, winning their first four group stage games.

A cursory look at the Galo line up reveals the reasons for such optimism. The supporting cast is strong even before you get to the superstars. Striker Jo is back from his promising but eventually ill-fated European adventure, Gilberto Silva may be aging but often moved back into a central defensive berth is as dependable as ever and in Ronaldinho they have a player who is again playing with the famed buck-toothed smile on his face.

For me any opportunity to make forays into the fabled Brazilian football universe is ever exciting. But what of the locals? The Minas Gerais State Championship is hardly the pinnacle of the game here and serves mainly as a prelude to the national championship. A quick explanation was all that was needed. “We love football, and if I wasn’t here I’d be having lunch with my wife and mother-in-law” was how it was put to me, which is sound logic that is difficult to argue with.

The stadium is perched like some kind of Olympic torch on the top of a steep hill, so reaching the turnstiles feels like the end of some sort of wonderful pilgrimage, and we were to be treated to a terrific show once we got there.

The steep approach to the stadium…

Opponents Tupi had been muddling along nicely in the mid-field of the table, but were never really in the game. Even before captain Rever opened the scoring Atlético had been showing their intent and a bustling Jo header made it two before the break.

In the first half Ronaldinho had quietly impressed without stealing the show playing just behind lone striker Jo. Come the second period and he’d moved out to the left and the party really got started. The extra space allowed him to show off the array of skills that in the pre-Lionel Messi days seemed to be somewhere near the pinnacle of how beautiful the game could get. 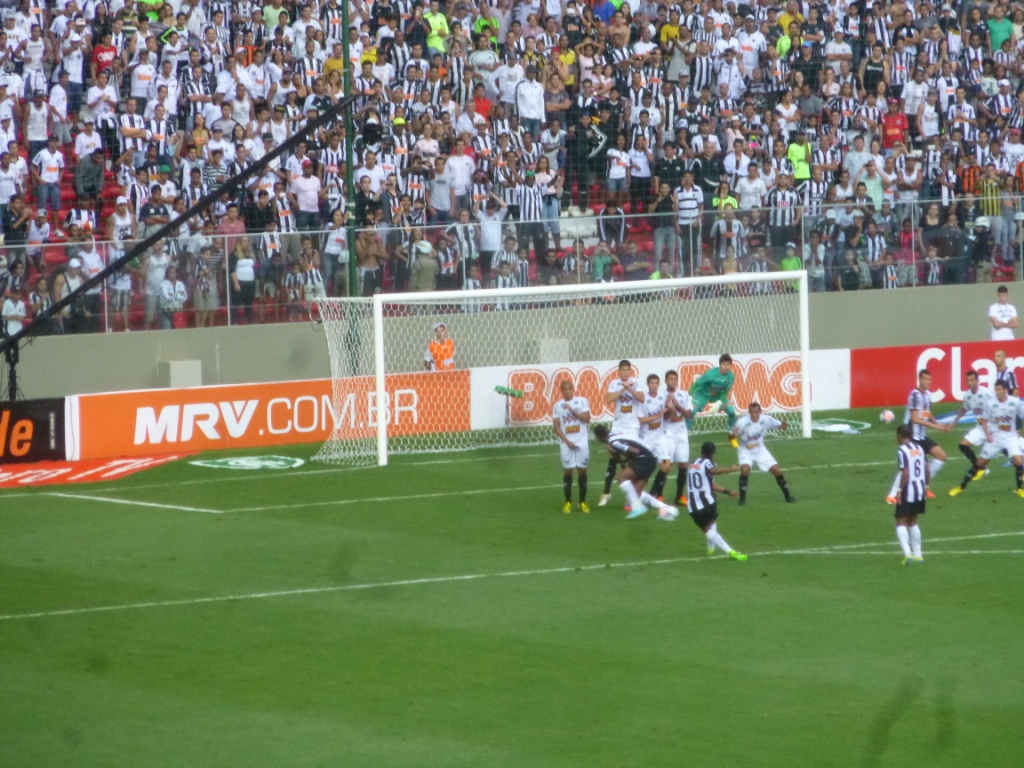 Ronaldinho (No.10) curls a free kick around the Tupi wall…

In a twenty minute spell a mesmerizing array of flicks, tricks and glorious passes acted as a reminder of just what a player Ronaldinho was, perhaps still is, and put Atlético 4-0 to the good. Pleasingly, the afternoon’s hero capped off a gorgeous display with the fourth before being substituted and departing the field to universal bows of worship from the star-gazed home support.

Leaving the stadium and stumbling back down the hill the pervading expression spread across the departing faces was a clear one, it’s not hard to understand why the grins were on show: we could be on to something here. 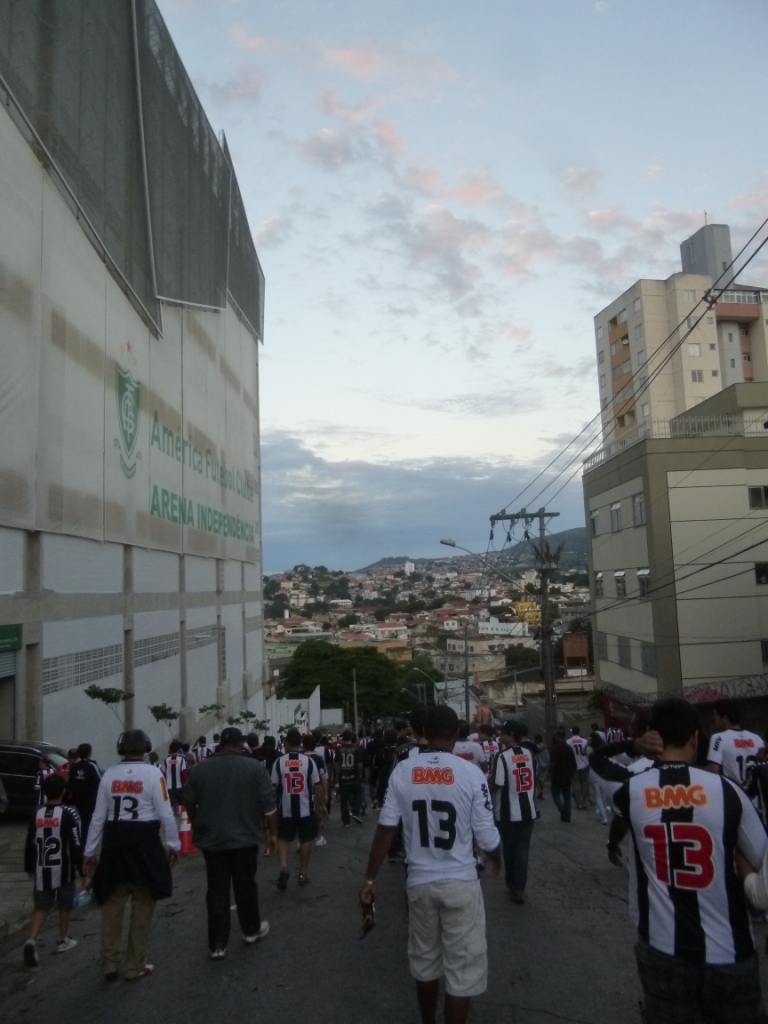 Back down the hill – the steep decline on exiting the stadium.