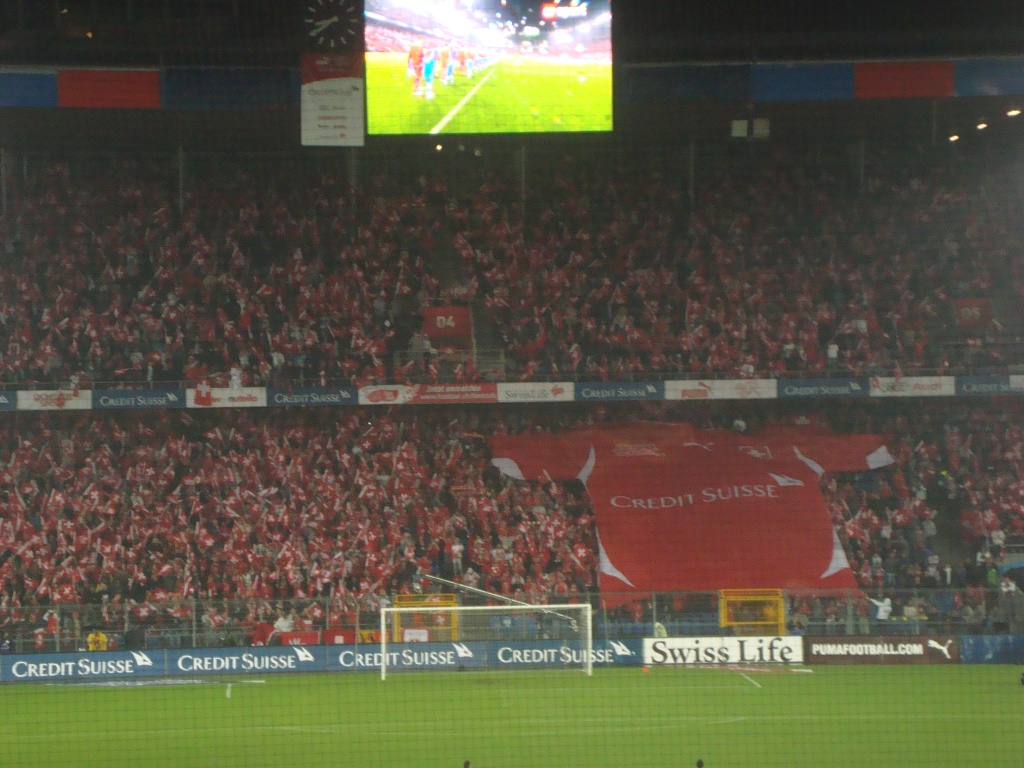 Following the disappointment of the 2010 World Cup exit to Germany a few months before, the slate had not quite been wiped clean ahead of England’s first away game of the Euro 2012 qualifiers against Switzerland. So here we go again – committed to another campaign!

The gamble to book up Easyjet flights to Basel about 7 months in advance (instead of Geneva where England had last played in Switzerland on that memorable night against Argentina) had paid off as the Swiss FA confirmed the Euro 2012 qualifier against England would be played at the St Jakob Park Stadium – home of FC Basel. Result.

The gamble by the Police to turn up late at our departure gate to check England fans eligibility to travel didn’t pay off as the inevitable delay checking a plane full of passengers heading out for the game made us miss our departure slot.

Despite being allowed to board thinking everything was hunky dory – we ended up sat on the stand for 2 hours cooped up in a plane with no air conditioning or refreshments, on a plane full of England fans ready to climb walls. We finally took off – albeit slightly irate on the short flight to Switzerland! 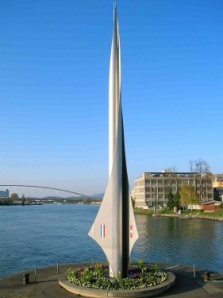 The town of Basel lies in the north-western corner of Switzerland. The town shares borders with France and Germany and is the heart of this tri-national region. The ‘Dreiländereck’ (or three countries’ corner) is well worth a visit on the outskirts of town if only for the photo opportunity with a ‘metal rocket looking monument’ emblazoned with the three countries flags on it!

We flew into Basel-Mulhouse-Freiburg – the only tri-national airport in the world – and Basel city centre is about 3 miles from the airport and is conveniently connected by the no. 50 bus which runs you quickly into the centre of town.

Switzerland isn’t the cheapest place on earth to visit, and after an expensive world cup (sorry holiday in South Africa) we could have probably done without a visit so soon to one of the most expensive countries in Europe. As such this ended up a budget trip in what felt like a millionaire’s playground!

Unable to afford an afternoon of pre match drinks in a warm Swiss pub we opted for the more cultured option – Basel street drinking. Cans of beer from the off licence were around 4 Euros ago – almost London pub prices (Basel pub prices were nearer the 10 euro a pint mark), and there appeared to be quite a few other fans in the same predicament. The main street was heaving with England fans enjoying some alfresco beers on in the streets of the old town. As the rain began to fall quite heavily there was no option but to double the flag up as a tent canopy which provided much need shelter for us and a few Leeds fans that had joined us! 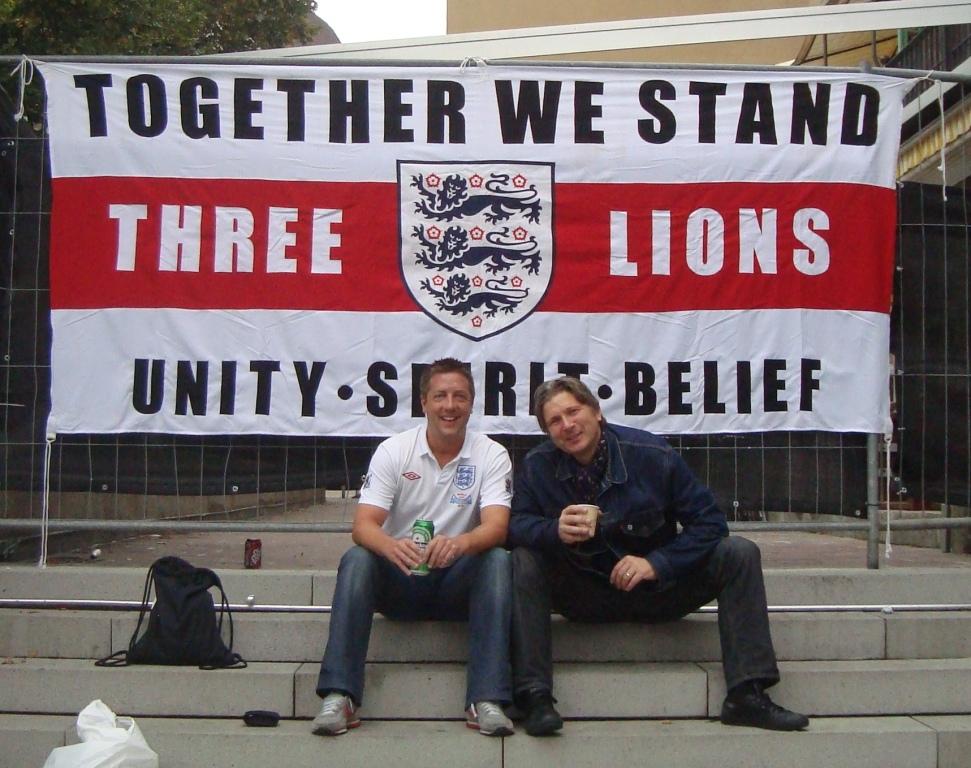 To get to the St. Jakob Park Stadium you can take tram no14 from the city centre and it pulls up right outside the ground. As you alight the tram you will be greeted with a line of Bratwurst stalls – this was ambush marketing to a couple of drunken English blokes – and safe to say we probably paid ‘top dog’ for a couple hot dogs each!

St Jakob Park is a compact ground with a capacity of 30,000. To me it had always looked an imposing ground on TV and the Basel ultras often made it a difficult place for opposition teams to visit in European club competition. If i remember correctly England fans were given a two tiered section in ‘Tribune B’ behind the goal. 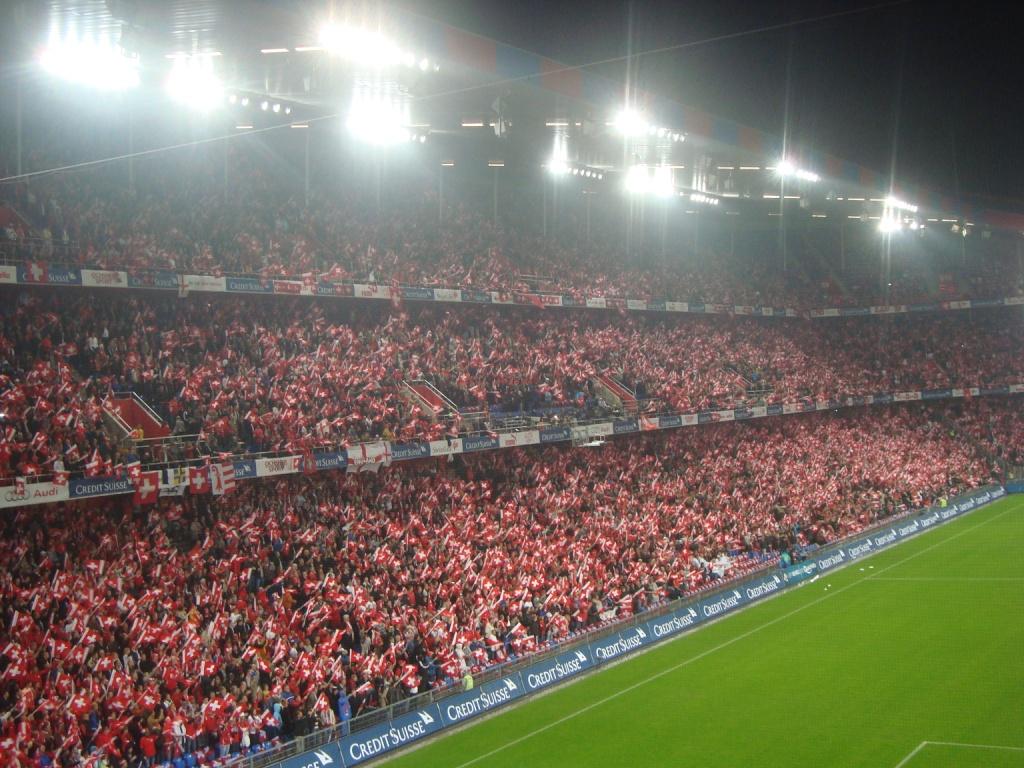 We had anticipated a difficult night. Switzerland are a well organised team that can be difficult to break down; and although they perhaps lack a real attacking threat, they defend well as a unit making it difficult for opposition teams to play. This was epitomised by their recent World Cup performances, where they kept a clean sheet against Spain in their 1-0 win in the opening game; a clean sheet against Honduras in a 0-0 draw (which perhaps they thought they should have won); and it was only an off day against Chile that cost them a place in the knockout phase.

It turned out to be a really good night for England as the team produced a really strong, competent performance, later described by Capello in his post match interview as “the best first half under his reign”. Shame that didn’t come a few months earlier in the kill or be killed game against the Germans in the World Cup!

England’s 1st goal came via some excellent interchange play on the right between Theo Walcott and Glen Johnson, who in turn produced a great low cross which provided Rooney with a simple tap in from inside the 6 yard box. Unfortunately Walcott sustained an injury during the move as he fell awkwardly trying to get on the end of the same cross.

Walcott’s loss turned out to be Adam Johnson’s gain. Johnson made a big impact on this game and even got himself on the score sheet with a well taken goal in the 69th minute. A slick interchange in centre midfield set Johnson free, who rounded the keeper and coolly slotted home.

On early outings in an England shirt I have been impressed with Adam Johnson – he looks to play with no fear, has a bit about him, and isn’t frightened to take on defender’s and have a go. On this showing I would say he has the ‘potential’ to make one of the wide midfield positions his own in years to come in an England shirt.

England’s positive performance was momentarily interrupted by a wonder goal from Shaqiri. Cutting in from the right side he skipped past Ashley Cole and unleashed an unstoppable rising drive with his left foot that arrowed into the far top left corner.

England’s 3rd came fairly late on in the 88th minute as Darren Bent finished well after a good through ball from Gareth Barry. That goal put the game to bed and capped an all round positive England display.

Although I would be keen to return here one day to see FC Basel play – the high cost of living in Switzerland would probably lead me to find an alternative football destination ahead of this one! Thankfully our visit to Basel was only a short one – and restricted the damage imitation to our pockets!

Ps: For those of you scrathcing your heads wondering what the title of this post is all about; it’s not referring to a Croatian born Swiss striker; but the old cockney rhyming slang for ‘skint’!