To be honest, I entered Russia with the daunting feeling of entering a dragon’s lair. It’s a country that almost no one you know has been to, yet almost everyone offers you a stern ‘be careful’ about going there none the less.

After the military posturing and stern immigration checks at the border I was finally in Russia for the first time and on my way to Saint Petersburg.

But if Russia itself caused mild concern then its football couldn’t help but make me feel downright nervous. On Saturday I would be watching Zenit, who finished off last season with a crossbar-breaking riot of a pitch invasion…and that was after they had won the league. In their second game of the new season Dynamo Moscow would be the visitors. What if they were to lose this time?

Flanked on all sides by rivers and canals, Saint Petersburg is a breathtakingly beautiful city, and the Petrovsky Stadium is certainly not out of place, sitting on a small island all to itself beside one of the estuaries. However, walking over the bridge from the centre of the city it was not the picturesque setting that controlled my eye line, but the police, the rows and rows of police.

I’ve been to some high-profile matches before, but I’ve yet to experience anything like the police presence out in force for this, my first peek into Russian football. These were not friendly bobbies with nodded ‘Shirokov’s due a goal today’ greetings to passing fans either. Instead we were all welcomed by battalions of full-on riot police with truncheons, shields and grimaces. Dynamo had only bought a hundred or so fans along with them, and I got the distinct feeling that they were there for us and us alone. I was already worried enough, having worn a plain blue t-shirt and then seeing everyone else was favouring sky blue.

No matter, after a week in the Baltic backwaters it was good to be back amongst a throng of supporters in a proper football city.

Having made my way through the stringent security checks I was on to the island and in the thicket. I quickly got the impression that Zenit is a club with two very different edges to it. A family club on the one hand, where fathers walked hand in hand with their replica-shirted young sons. On the other, three feet away stood the rougher side, intimidating burly young men with beers in hands warming up their vitriolic voices. From my perspective, the fear factor of the would be troublemakers was at least decreased slightly by their donning of the city’s trademark sailor caps. 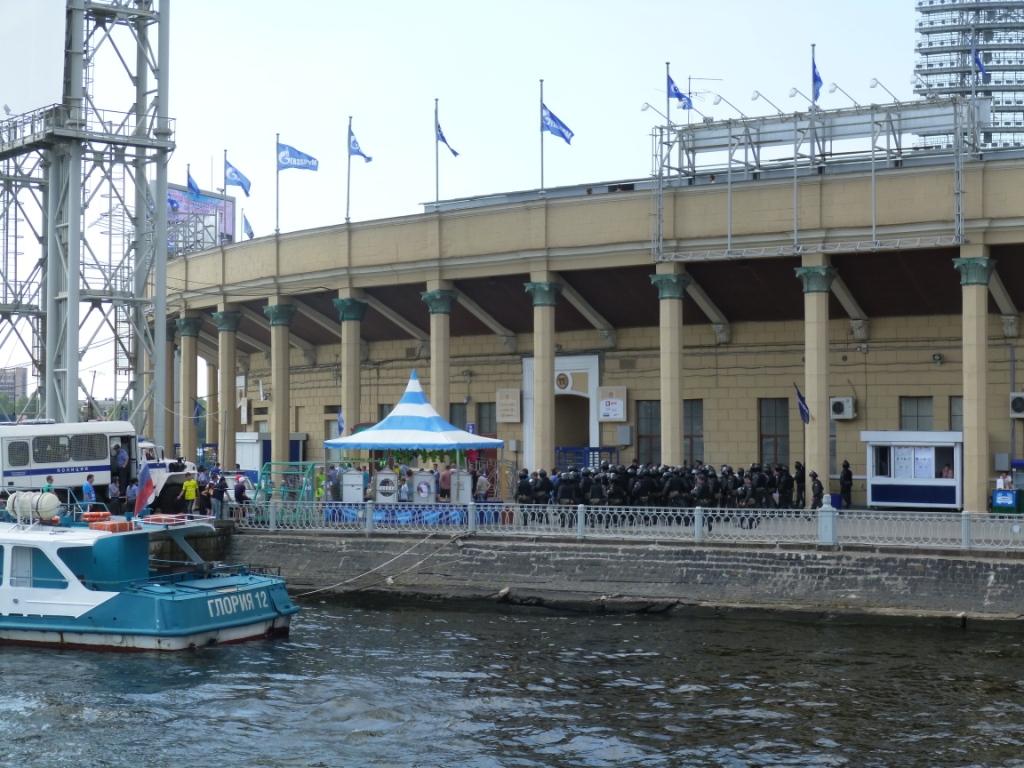 Yet more body searches and I was finally up into the stadium itself. The club will move into its new megastadium, said to resemble a spaceship, in the next couple of years and it’s clearly a move that needs to be made. The bright new seats can’t hide the fact that virtually every spot in the ground has an impeded view. The bottom half of the bowl is just too low and flat to see much over the running track and even from my seat right at the back the goal line was blocked by the advertising hoardings. But then again, perhaps that’s more like how football used to be.

From the low tone rumblings of the first unnervingly sinister “Zay-neet” chant, the mood was menacing. With flags, flares and arm-linking routines to join with the singing, the atmosphere created was not one I’d want to enter as an opposition player or supporter. There was also a thick hanging cloud of smoke over the stadium, but that was more to do with seemingly every fan ignoring the signs and lighting up cigarettes every couple of minutes. When the new stadium arrives, with its roof and without its track, it’s sure to make for one of the best footballing experiences in Europe.

The baking hot sun wasn’t helping even us fidgeting fans, but after Aleksandr Kerzhakov did what he humourously couldn’t during the Euros and scored after a terrific turn of foot ten minutes in, the three points never looked like going to anyone but the champions. That old cart horse Kevin Kuranyi lead the Dynamo line well enough, and went close with an acrobatic volley, but when full back Domenico Criscito finished neatly to double the advantage after seventy minutes it merely confirmed the victory the Zenit fans had assumed was theirs long all along.

Walking back over the river after the match something struck me. Zenit are in just about every way a mightily impressive club, but I left feeling that they were also just a little dislikable. I have much to learn about Russian football, maybe all the clubs are like this, but to me Zenit’s talented team and their brilliantly charged fans came across as a club that has only recently become successful, yet already smirks with a sense of entitlement. That being said they have set the bar mightily high at the start of my Russian trip, with the rest of my month here now having much to live up to.

The Petrovsky is pretty small by big club standards but you have a decent chance of getting tickets in if the game isn’t too massive and you buy tickets a day or two beforehand. Tickets can be bought from the kiosk at the stadium (take some ID with you, as well as to the game) or from the Zenit club shop in the shopping mall on Nevsky Prospekt (the city’s main street), above the subway station there. Furthermore, tickets can be bought online.

One other essential piece of info to know about the Russian Premier League is that there is a youth version of the league that runs concurrently with the league proper. The day before Russian Premier League games the same fixture is contested amongst the youth teams somewhere in the same city. This makes for a great way to get a weekend started and can take you to some cool smaller stadiums as well. Zenit-Dynamo took place at the club’s practice stadium on a small island next to the main stadium. Even for this game there were a few hundred loud fans to cheer on another Zenit success.

Entry to these games is free or, for the bigger clubs, not too expensive.