England’s penultimate Euro 2012 away qualifier was against Bulgaria in Sofia against a Bulgarian team that was very much on the road to turmoil. Player moral was reportedly low, confounded by some poor early qualification results that had seen them pick up only one win on the road to Wales, and two draws against Montenegro and Switzerland. Even the supporter’s patience was beginning to wear thin with little belief in their German coach Lothar Matthaus who had reportedly started to ‘lose the dressing room’.

We arrived in Sofia on the Thursday morning and were welcomed with warm September sunshine. It’s great heading away from the colder UK climate for a few days and to be able to get the shorts and t-shirt on again after a dismal British summer!

We were staying at a Best Western hotel located on the outskirts of the city centre – so rather than working out the local bus routes we jumped straight into a cab from the airport and headed to our hotel for a quick check in and bag drop. Cabs are fairly cheap in Sofia – a transfer into town from the airport will set you back no more than 15 Lev (or 6-7 euros). There are a number of illegal taxis in operation at Sofia airport so to avoid getting stung by extortionate fares you are advised to take one of the registered taxis from one of the reputable companies that have info desks located inside the airport terminal.

A good place to start in central Sofia is a quick wander around the Aleksander Nevski Cathedral. The cathedral is impressive to say the least and is one of the largest eastern Orthodox Cathedrals in the world, and is one of Sofia’s main tourist attractions. 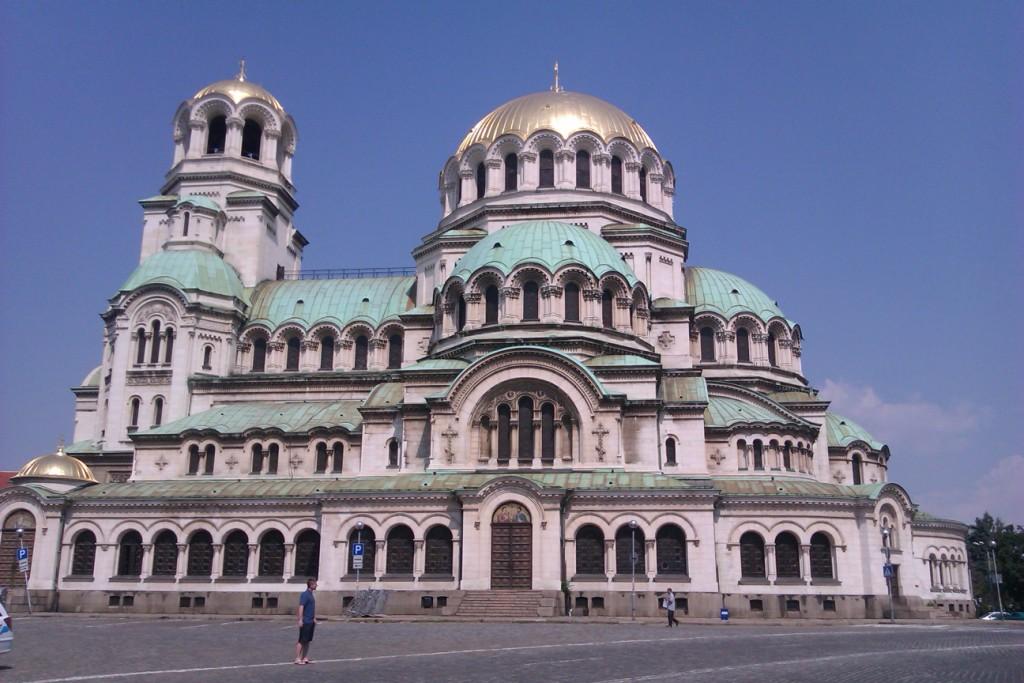 Located in the park adjacent to the cathedral there is a flea market selling all sorts of antique goods and bric-a-brac, including wartime badges, medals, hip flask’s, clothing, and a range of de-commissioned weapons! Mark enjoyed taking the opportunity of negotiating with a stall seller over the price of a pistol whilst pointing it at him! 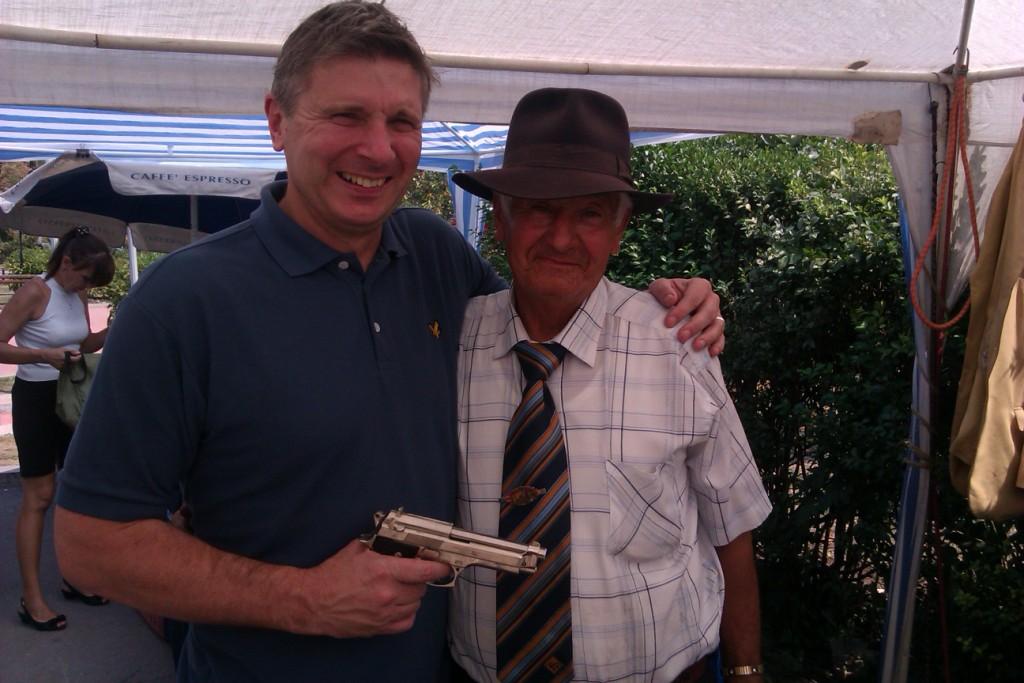 Mark turned to heavy handed tactics to get the right price…

Sofia – as it turned out – is a drinkers paradise. There are plenty of bars dotted across the city – and we just started off by wandering down a few of the side roads away from the cathedral. You can’t beat a warm sunny day and an afternoon off enjoying a few drinks. We stumbled (literally) across many small bars that afternoon making it an ideal way of getting your bearings in a new city. It’s just a shame those bearings would be forgotten by the time we woke up the next morning!

One of the upper end bars in Sofia!…prices tripled here in the space of 45 minutes!….

Drink prices are ridiculously cheap in Sofia – one of the cheapest I have come across in a capital city in Europe in fact. I recall one round of drinks consisting of the following: 2 x double vodkas; 2 x soft drink mixers; 2 x large liqueurs; and that set us back the equivalent of just under £7!

During our opening afternoon pub crawl we popped into a basement bar which was empty except for the barman and a young lady who was sat at the bar having a drink. As we got chatting to the lady at the bar she rather modestly explained to us that she was a singer and loved soul music. Mark being a bit of a music expert himself started reeling off a host of soul singer names, Amy Winehouse, Erykah Badu…you get the picture. Enjoying the engaging conversation from a couple of half pissed blokes, the lady said that she was trying to break through as an artist and had already released a few tracks herself and was quite well known in Bulgaria. She didn’t really go into any more detail than that, but as we left she handed us a piece of paper with her name on it with a ‘My Space’ address. Ruth Koleva was her name.

Without realising it at the time, we had just spent about 45 minutes chatting to a Bulgarian national celebrity over a few double vodkas! It wasn’t until we returned home and looked up ‘Ruth Koleva’ on Google, that we realised she was perhaps slightly more famous than she had modestly let on. It turned out we were chatting to Bulgaria’s equivalent of Duffy or Amy Winehouse! She was also Bulgaria’s Eurovision song contest entrant earlier in 2011 with a track called ‘Fever’. It’s on you tube – take a look she’s got a pretty decent voice:

The Vasil Levski Stadium is the national Stadium of Bulgaria and is located right in the heart of the city centre. It is literally a 5-10 minute walk from the Aleksander Nevsky Cathedral and is situated just off ‘Tsar Osvoboditel’ Boulevard. As you walk down this road on your way to the ground you will pass the impressive Soviet War Memorial on the right hand side which has the stunning backdrop of the 7,500 feet Vitosha Mountain.

The Levski has a 43,230 capacity and is an open bowl like ground – classic Eastern Bloc stadia and is situated adjacent to the city’s most famous park – the Borisovata Gradina. There are a number of bars and cafes located here and this was a popular place with both home and away fans as they congregated here in the lead up to kick off.

There is another stadium literally next door to the Levski and that is the Balgarska Army Stadium home of CSKA Sofia. Apparently the gates to the ground were open and you could just wander in and have look round the facilities at your own leisure!

Officially there were 3,000 England fans in Sofia for the game, but the many more that had travelled without tickets were able to purchase them easily on the day of the game. There are several ticket booths on the periphery of the stadium that were selling tickets to England fans for the Bulgarian sections. Despite the Bulgarian public beginning to lose faith in their team, the draw of England at home meant the fans were still out in force for this match.

Bulgarian international football seemed to be heading for somewhat of a crisis. Poor early qualifying results had left them floundering near the bottom of the group. This coupled with supporters losing faith in national coach Lothar Matthaus’ abilities had created a strange feel about the national side from the locals – once cherished for its world class talents (Stoichkov, Berbatov et al) and the dizzy heights of a world cup semi final in yesteryear.

Bizarrely Matthaus had been openly critical of his team ahead of the match, and was even quoted in an interview with an English red top newspaper as saying that “many of his players are not that good and the supporters expect too much”. “In Bulgaria the players think they are great. This is a problem”.

Was this reverse psychology from Matthaus?

Perhaps it was an attempt to get a ‘response’ from his underachieving players? If it was, it backfired massively! What followed in the 90 minutes against England was as lack lustre a performance as you will ever see from an international outfit.

England started the game really well, and the first half was such a one sided affair, that the game was effectively dead and buried by half time. Some very well worked goals saw England sail into a 3-0 nil lead – Cahill opening the scoring on 13’ minutes and a Rooney brace followed on 21’ and 45’. With the job done in the first 45 minutes, England could take their foot off the gas and save some reserves for the game against Wales at Wembley four days later. The game fizzled out with Bulgaria rarely troubling England.

Bulgaria’s 3-1 defeat away to Switzerland 4 days later was the straw that broke the camel’s back. Matthaus was sacked as national coach on 19th September with one qualifier remaining. Their final game against Wales at home saw a boycott from fans with just over a 1,500 turning up to see their dismal 1-0 defeat (Most of that figure was the Welsh away following!). Finishing bottom of the group with only 5 points from the whole campaign I think it’s fair to say that sadly Bulgarian international football has reached rock bottom.

Sofia is a pleasant city with a warm summer climate that extends well into October. With cheap food and drink prices this is a great place for a European football weekend away. With five club sides based in Sofia – four in the top flight – I will hopefully return here one day to see some of the domestic derby games involving Levski, CSKA, Lokomotiv and Slavia.