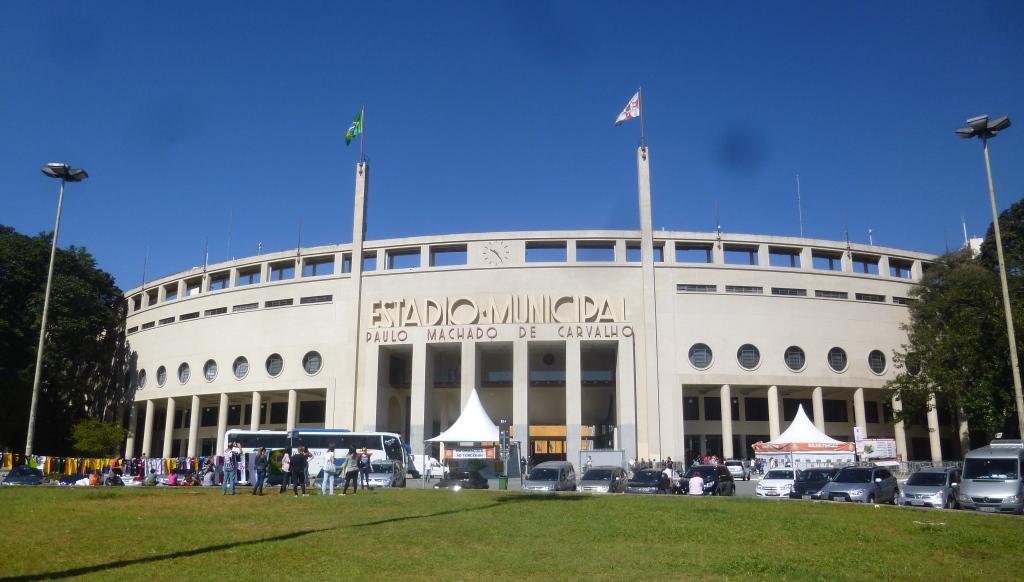 I had arrived in the city for Wednesday evening’s Corinthians-Sao Paulo clash in the Recopa, the South American equivalent of the European Super Cup, the ante upped with the two continental cup winners happening to also be two of the South America’s biggest rivals.

The game was sold out, though tickets for such things are always available; it just depends on how much you’re willing to shell out for one with a tout.

I went along and found that it was very sold out and tickets weren’t dipping below the 70 quid mark. I expected that once the game got underway the floor would fall through the market and I’d be able to scoop one up more reasonably, I was wrong about that.

What I did discover however was a glorious subculture of a few hundred Corinthians supporters who go to their Pacaembu stadium just to be there, just outside there, and listen to the game from the other side of the concrete on radios while sharing beer with friends. It certainly beats screaming at the telly in your replica shirt. 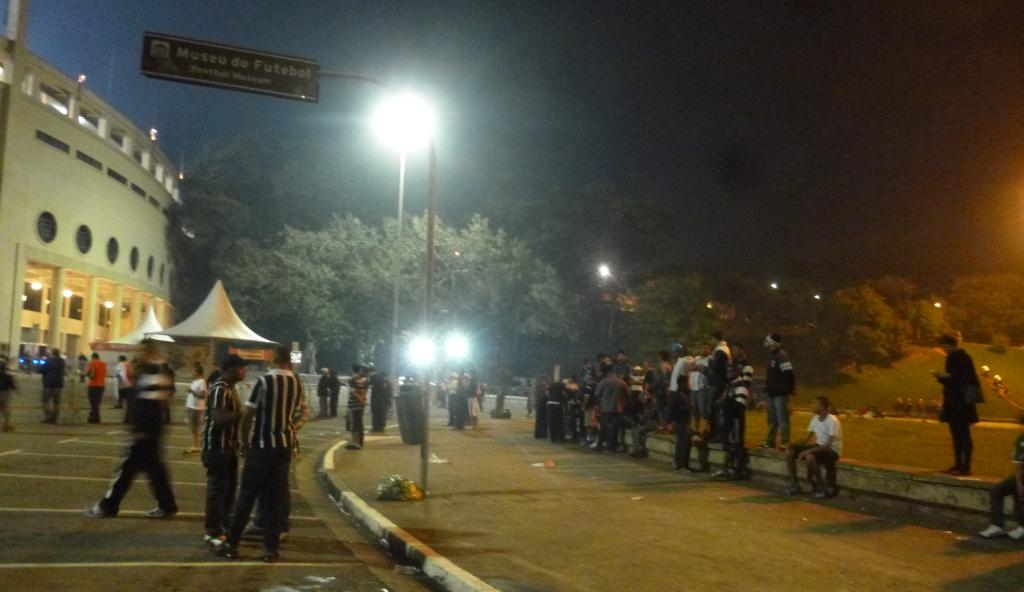 The night sadly had to be chalked down in the loss column, though not for Corinthians who sidled to a 2-0 win. However, football comes around quickly in these parts and on Saturday Sao Paulo were at it again and hosted Cruzeiro in the Campeonato Brasileiro without a hope of selling out their gargantuan Morumbi home.

The Morumbi and the city it sits in share many characteristics. Both are defined by their size not their beauty, the opposite of Rio and its Maracanã just down the road. But that said, Sao Paulo and its largest stadium are aware of their aesthetic short comings and are keen to make the best of things. The 80,000 red seats make the Morumbi more homely than I had expected, while around the pitch the club’s colours are laid out in waves of chalk, with flower beds and bushes added to give life to the surrounding grey concrete. 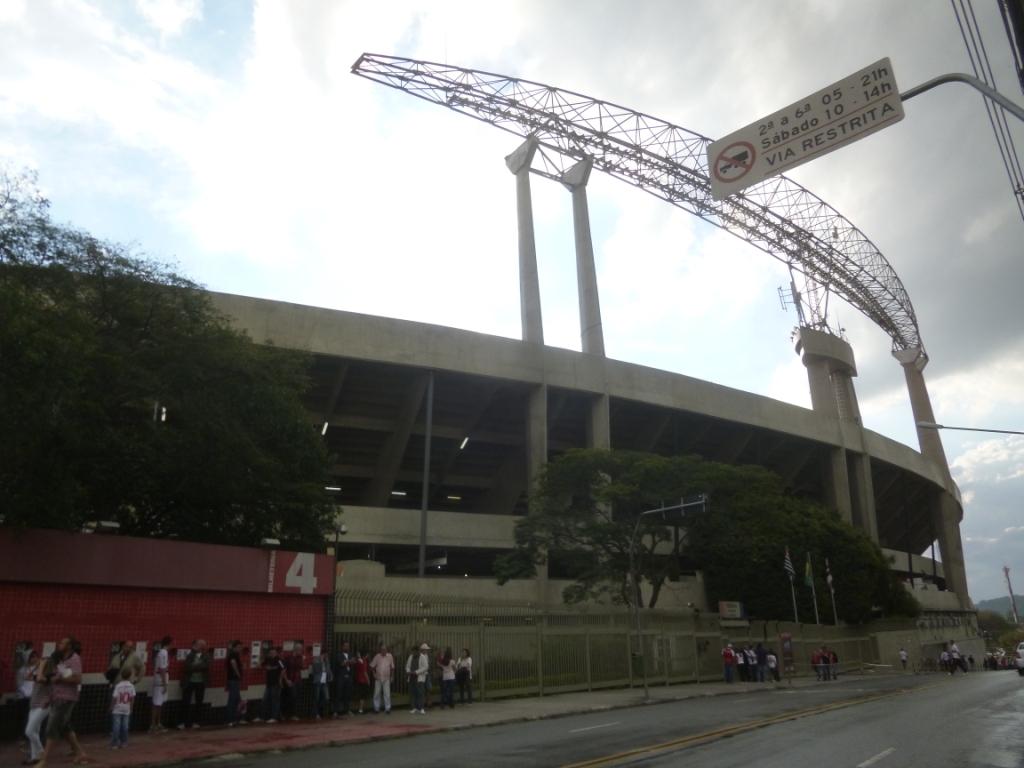 The drab concrete exterior of the ‘Morumbi’….

However, there was more fun to come. As some impressive keepy-uppy freestylers came out the club’s mascot was revealed, to me at least. Love them or hate them they are unavoidable, but if they you’re going to do it you should do it properly. Sao Paulo’s oversized mascot is…Saint Paul, a smiling and bearded six foot cartoon character of everyone’s favourite biblical character. Though, using such logic, Hull City would have the bottom of a boat entertaining kids before games and I’m not sure how well that would work.

As for the fans, the stadium must be one of the few in the world where goalkeeper jerseys almost outnumber outfield shirts. The reason is simple: Rogério Ceni. Not only has the forty year-old won just about everything to be had during his time with the club he also scores goals, loads of them.

To date freekicks and penalties have given him some well over a hundred, a FIFA recognized world record for a goalkeeper, and he is the club’s all-time Copa Libertadores top scorer. It also leads to a situation, for me personally at least, where any time the ball got near to the Cruzeiro box my internal monologue, instead of the usual ‘shoooot!’, screamed ‘get fouuuuled!’ 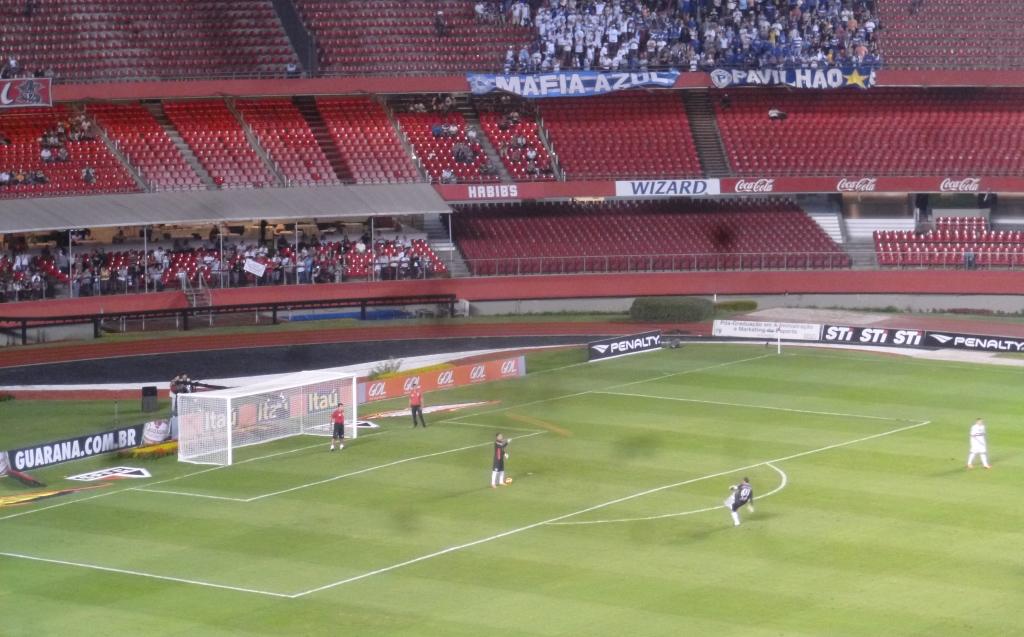 Goalkeeper and club legend Rogério Ceni practices his set pieces in the warm up!….

Sao Paulo have assembled a squad of well-paid returnee veterans, and they’re not making themselves popular. Seleção legend Lucio’s name is heckled as it’s read from the team sheet, while up front Luis Fabiano looks disinterested. He retains his bullish strength but has added bullish weight and rarely seems able to break into a jog. His substitution early in the second half is applauded.

Maybe it’s the local form or the team’s lack of form, but the knives are out from the start and it never quite happens for me or Sao Paulo. The home side get to half time level but without inspiration and after Cruzeiro open the scoring five minutes into the second period fatalism sets in and the hosts slump to a lifeless 3-0 loss, their sixth defeat on the bounce. 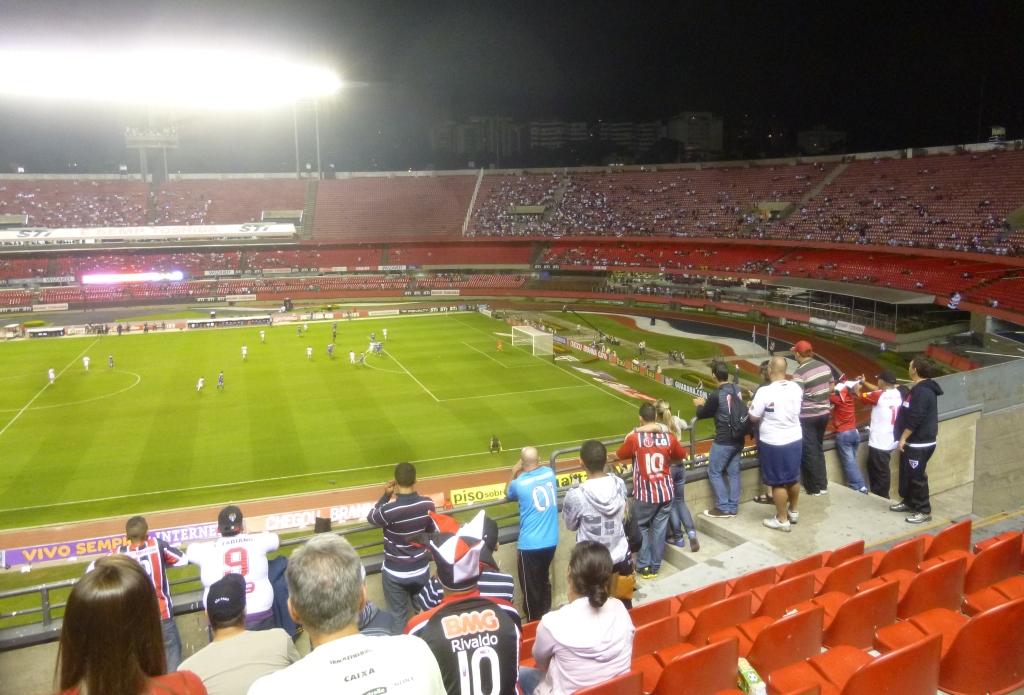 Worse still, the team never get a free kick within Ceni’s striking distance. The closest we get to such fun is when he sprints over to unnecessarily take a throw in his own half when the game is goal less, no one seemed to have the authority to stop him.

Post game and the home fans march on the executive car park. I wander along with them partly due to curiosity though more because the angered masses are blocking the road and subsequently my bus. After half an hour of moaning and chanting the few hundred fans have made their point and we all fade back into Sao Paulo, hoping not to see any of the gleeful Conrinthianistas that have made themselves heard in the city this week.

For anything other than a local derby you’ll have absolutely no trouble buying a ticket at the Morumbi before the game, Sao Paulo’s average attendance are over 50,000 fans short of the stadium’s capacity.

However, do take your passport with you to buy your ticket and do give yourself plenty of time to get there as there are no metro stations nearby and you’ll need to catch a bus down to the south west of the city (I caught one from Pinheiros at the end of Line 4).