Despite taking in a few German club grounds during World Cup 2006, my Bundesliga debut was massively overdue. I’d read many articles about the rise of the German game, and also the fact that the game was very much still centred around the fans.

In contrast to top flight football in England – which is alienating the working classes – the Bundesliga seemingly embraces them. Lots of large modern stadia (not everyone’s cup of tea I know), but with cheap ticket prices (definitely everyone’s cup of tea) and terracing, big crowds, passionate atmospheres, and to top off it off beer readily available throughout the 90 minutes, the Bundesliga is in some ways everything the Premier League is not.

For some reason I’d always found an alternative footballing destination to Germany. But now that I’ve been there’s a whole lot more of German football I’d like to discover!

For the record my other half isn’t a big fan of football and usually gets left back on UK shores for trips like this, preferring to remain at home rather than travel abroad teasing out my new football destinations! On this occasion though, I’d somehow convinced her that a trip to Dortmund in February would be worthwhile. After all it was my birthday weekend and she couldn’t refuse. Oh, and did I mention there was a game on?

It turned out to be the big freeze in Germany that weekend and arriving in Dortmund on the Friday night the thermometer had dipped to a toe numbing -15C. As we shared a few steins in the ‘Alter Markt’ (basically Dortmund’s town square) I hoped the under soil heating system at the Signal Iduna Park Stadion had been cranked up a few notches overnight by the groundsman!

In researching the trip I’d read that getting hold of tickets for Dortmund matches was like finding the proverbial needle in a haystack. There isn’t such a thing as match day ticket sales (unless you include touts) and if you look at attendances for each Borussia game at home it nearly always reads 80,400. That figure happens to be their average home gate which is the highest of any other European club.

It’s not all doom and gloom though on the ticket front as the club has an internet ticket portal that releases a limited number of tickets for each home game approx 4-8 weeks in advance. With a little patience and the help of google translate, and after about 30 minutes of screen juggling I had managed to secure two 40 euro tickets in the Nordtribune.

Renowned as an industrial city, Dortmund does have it’s sightseeing limitation’s, and football should really be part of any visit itinerary! In fact going to the Signal Iduna Park Stadion features in many of the tourist guides ‘top 3 things to do’! Where else in Europe does football feature so highly in a ‘Joe Public’ tourist leaflet!?

Of the few sights worth seeing I would say pop by the ‘Alter Markt’ (Old Market Square) and cathedral in the city centre, there are also loads of bars dotted around here which is the real reason I came to this bit! The Floriantrum (or TV tower) provides an amazing aerial view of the city, but more importantly the Borussia stadium. The tower is actually en route to the stadium so you can kill two birds with one stone by setting off a bit earlier than usual to the match.

The end of the line…Kampstrasse in Dortmund city centre, the Cathedral in the background marking the spot for the Alter Markt! 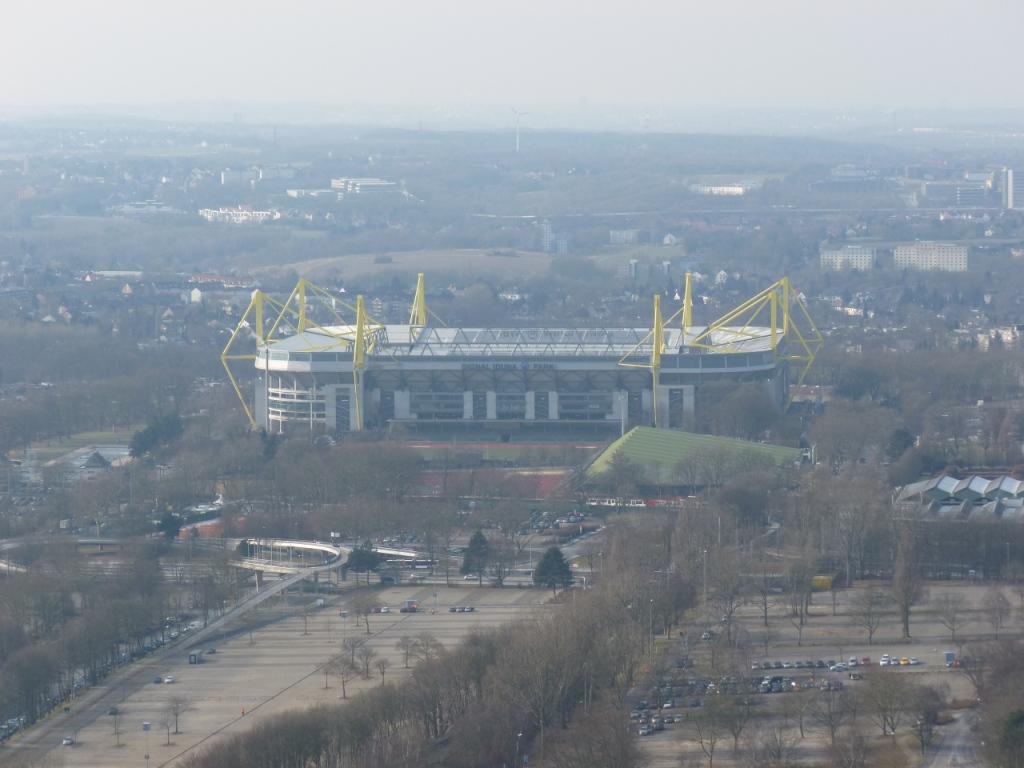 It was still bitterly cold on match day, -10C, and probably the coldest game I’ve ever been to. The customary purchase of a club scarf (which only ever gets worn once, then put into a box waiting for the day I can buy my own ‘football bar’ in a hot beachside destination somewhere, which deep down I know will never happen!!) was swapped in favour of a bobble hat to prevent earache from the cold!

The stadium is easily accessible from the city centre; and you can take the U-Bahn from the Hauptbahnhof to a stop called Wesfalenhallen which on exit from the station brings you out near the Nordtribune. On arriving at the ground, internet tickets can be collected from the portacabin / kiosk located outside the gates to the Nordtribune a few hours before kickoff.

Outside there are a number of souvenir stands selling all manner of club merchandise; but as hard as I tried I couldn’t get my hands on the must have German football fashion accessory – the classic denim jacket complete with sew on badges (see below). 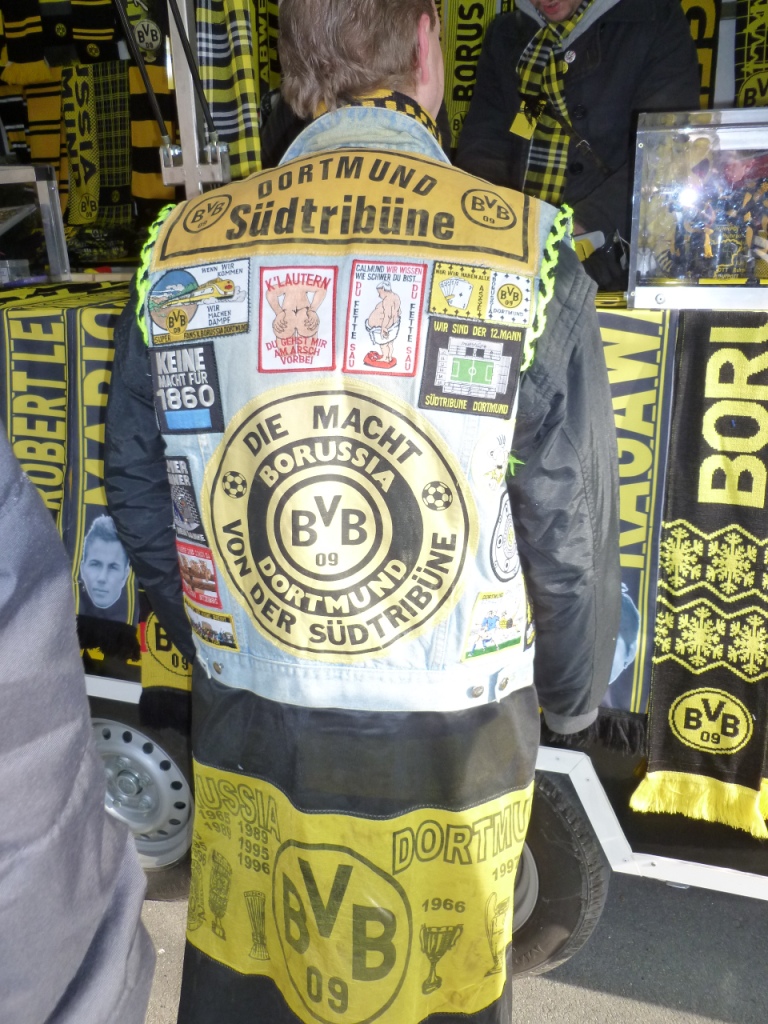 On the corner of the north stand there are a couple of places to grab a pre match beer or two. An outside beer garden looked great, but in -10C arctic conditions we opted for the sanctity of the indoor bar instead. Although packed, German efficiency meant you didn’t queue long before you were supping German beers to your heart’s content. It was time to get the ‘beer coat’ warmed up ahead of the cold couple hours ahead!

A word of warning to those that like a drink before the game…it is advisable to allow more than the English customary 10 minutes before kick off to leave the pub and get into the ground. With such a large home gate and with it being such a compact stadium, the crowds really build up and bottle neck around the turnstiles and it can take a while to jostle and filter your way to the front.

Once inside though you can’t fail to be impressed by this compact and imposing ground. The famous ‘Sudtribune’ at the opposite end was already heaving with BVB ultras. Housing 26,000 fans behind one goal for Bundesliga matches, this really has to be one of the ‘must see’ sights in European football. Nicknamed the “Yellow Wall” the terrace rises steeply back to the rafters and is a sea of yellow shirts, scarves and flags. The noise from the yellow wall reverberates around the stadium and the place literally rocks when a goal is scored. The fantasist in me would love to bang in a last minute winner in front of that lot, with John Motson screaming “look at these scenes” just for full effect!

Beer and bratwurst continue to be readily available inside the ground and are served throughout the full 90 minutes; and here you can enjoy them in your seat whilst the game is being played, rather than stood in a concrete concourse as we have become accustomed to in England!

Before you get your hands on these though, you have to negotiate the Borussia catering conundrum. First purchase a BVB food and beverage card from one of the small kiosks set away from the food / drink counters and preload it with euros. Once your card has been credited you can then take it to the counter and exchange your pre pay value for your chosen food and beverage. Sounds easy, but it can throw you when you’re not expecting it and your command of German isn’t the greatest!

As reigning champions at the time, Borussia had developed a young team full of exciting talent with a reputation for playing an attractive brand of open attacking football. Under the leadership of Jurgen Klopp Borussia’s team included household names such as polish trio Lewandowski, Blaszczykowski and Piszczek, Man Utd target Kagawa, and defenders Hummels, Subotic and Schmelzer.

Partly due to my limited knowledge of German football, Bayer Leverkusen’s side was less recognisable to me. The only exceptions being the ageing Michael Ballack (who started on the bench), and on loan Tottenham full back Vedran Corluka.

Located below us in the Nordtribune lower tier were a few thousand Bayer Leverkusen ultras (see below) that tried their best to generate some decent noise – but despite their gallant efforts they were never really going to compete with the 26,000 at the other end. 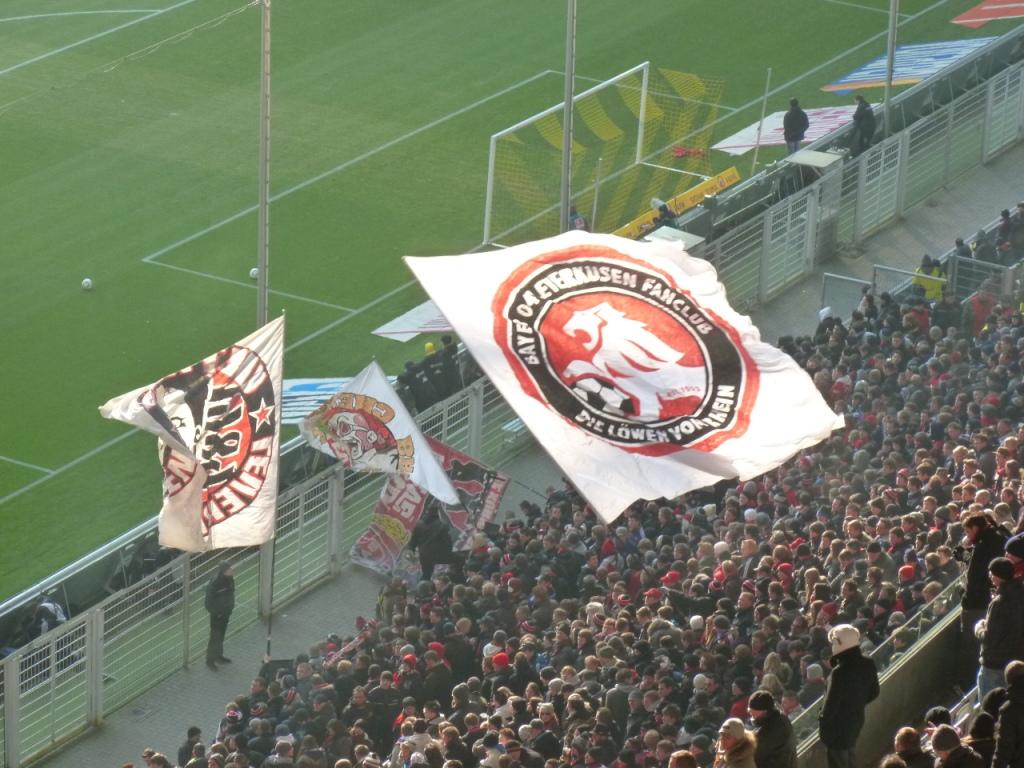 Shortly before the teams emerge for kickoff, a rendition of club anthem ‘you’ll never walk alone’ echoes around the ground, and the Sudtribune is really a sight to behold as there seems to be as many scarves as there are people held aloft. 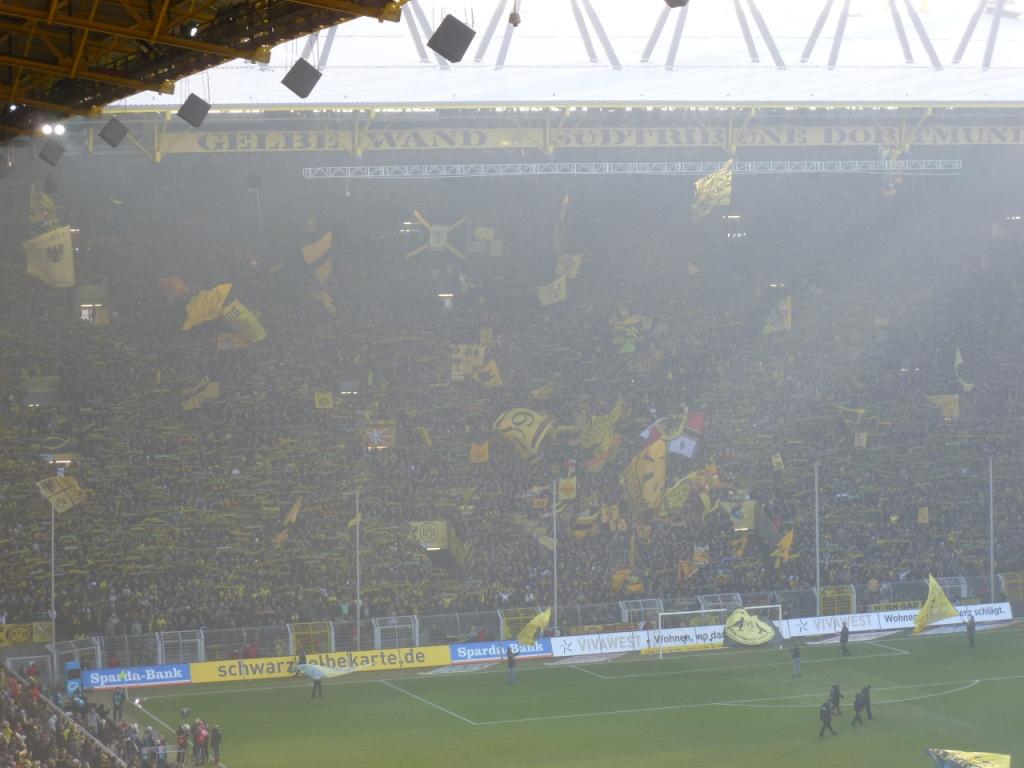 A view of the Sudtribune during the rendition of “You’ll never walk alone”….

The game itself was a fairly close encounter with not many clear cut chances of note for either side. As such I found my eye consistently wandering away from the game and staring at the Sudtribune in amazement. The chants and displays of the ultras for me were more entertaining than the game itself (but then I do have a soft spot for the efforts of foreign club ultras – we just don’t really get anything similar here in England!!). With the winter sunshine staring me straight in the face my photos perhaps don’t do the Sudtribune justice – you’ll just have to take my word for it – or go see it for yourself! 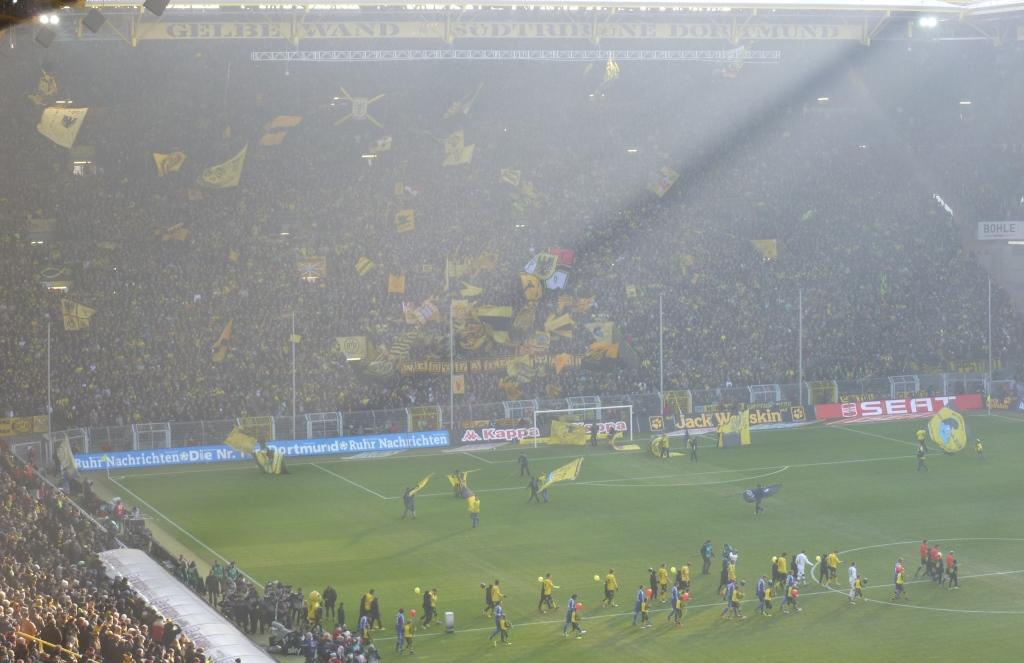 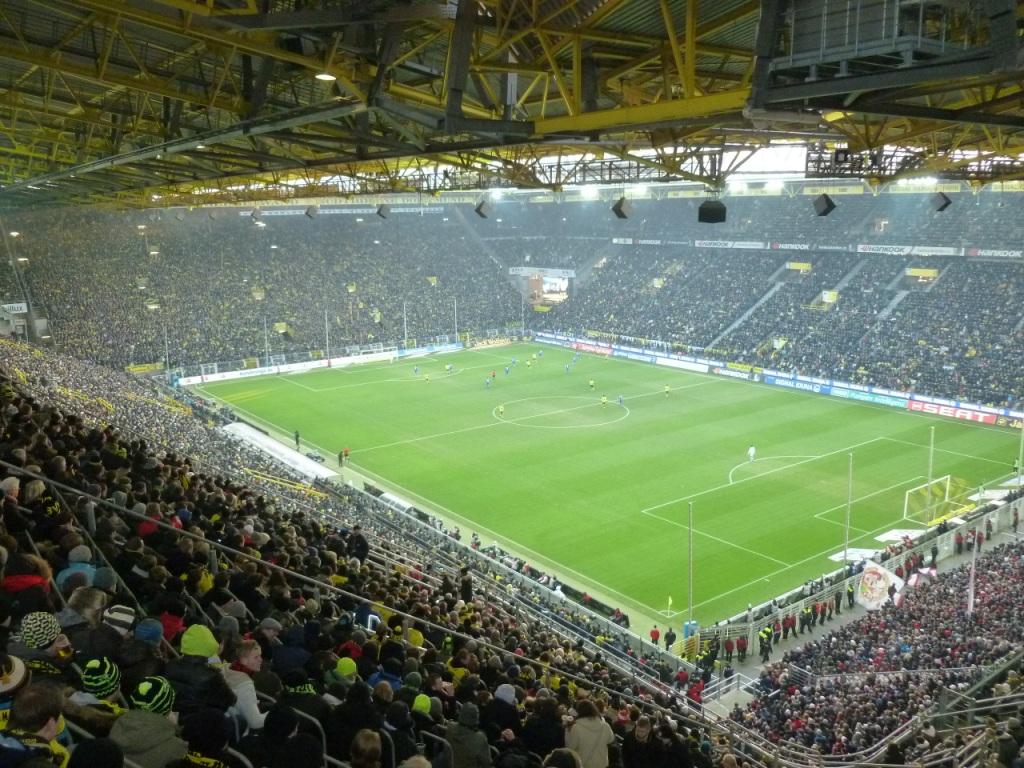 The only goal of the game came right on the stroke of half time through a well taken Nagawa strike, and that was enough to secure the three points for Dortmund.

Borussia Dortmund is more than well worth a visit in its own right; but if cramming more than one game of football into your weekend itinerary rocks your boat then the Ruhr region of Germany is an option worth considering. There are a host of other accessible clubs in the area to Dortmund including: arch rivals Schalke, VfL Bochum, Duisburg, and slightly further afield (but not much!) are Fortuna Düsseldorf, Borussia Monchengladbach and FC Köln.

Get yourself out there – you won’t regret it! 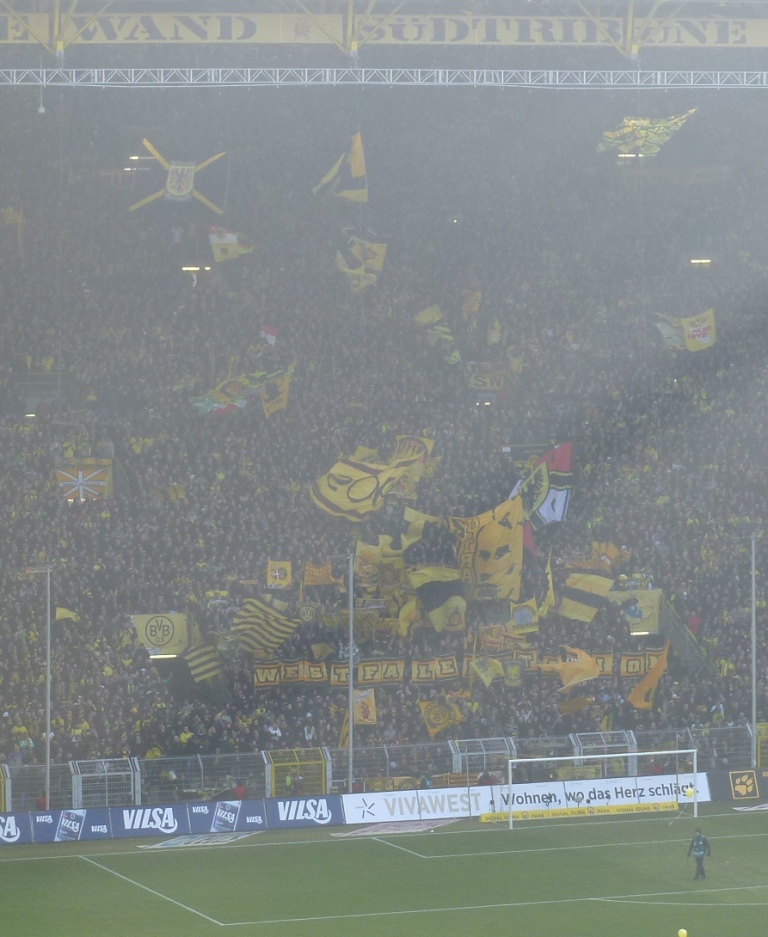