If you’re remotely religious and indeed of catholic denomination then Easter weekend in Poland is a time of special celebration. My trip to Warsaw was originally booked in to visit my future wife’s family and to share a first experience of this special family weekend. In the back of my mind though was one nagging question – would there be a game on I could get too, and could I be excused from ‘family duty’  for a couple of hours to make my Ekstraklasa debut!!

Polish football, whilst not an attractive option for most football tourists is one I would highly recommend. Not least for an ever improving national league but more for the passionate atmosphere at games and the ultras tifo’s that are common place in this league.

There is a strong ultras movement in Poland – which is clearly linked to the widespread problems with hooliganism across the country in recent years; but inside the grounds the atmospheres and displays are as passionate as any, and really are a sight to behold.

Take a quick glance at the Ultras Tifo website and you will see what I mean – many Polish teams regularly feature on here – and fixtures that you might normally turn a blind eye too will definitely grab your attention – if only for the impressive fan choreography and pyrotechnics that are regularly on display.

The fixture list had been kind and thrown up Legia v Ruch Chorzow. Luckily my future brother in law was a Legia season ticket holder – surely he wouldn’t want to miss the match even if it was Easter!

A traditional Easter weekend in Poland kicks off with a visit to the local Catholic Church to get samples of your weekend’s food blessed by the local priest. With sessions available every 30 minutes we joined a 50 or so strong local congregation at around 10am. Each member of the congregation (or couple or family attending) brings with them a basket containing a selection of Easter food stuffs including items such as eggs, sausage, bread, cake and salt. The relatively short service culminates with the Priest showering the baskets with flicks of holy water from the holy brush! As we departed, the next congregation were keen to get their baskets in a prime position on the Priest’s table!

With the formalities completed, my focus could now turn to my eagerly awaited Ekstraklasa debut and Legia’s lunch time kick off!

A quick bit of background information for the historians amongst you!…Legia Warsaw were formed in 1916 during the military operations of World War I, and historically are one of the more ‘well established’ names in Polish football. After the First World War Legia became the official football club of the Polish Army, and still to this day their stadium is named ‘Stadion Wojska Polskiego’, which translates as ‘Polish Army Stadium’.

I happened to be staying in a northern suburb of Warsaw called Legionowo, an area that has strong military ties itself, firstly dating back to Russian army occupancy in 1892, and then later by German troops until the start of World War 1. Even today the Polish army have a strong presence here with a training facility and barracks based in the town, and just by taking a short stroll through the town you can’t fail to notice all manner of Legia related graffiti.

The Stadion Wojska Polskiego – or Pepsi Arena to give it its commercial name – is a modern purpose built stadium with a capacity of 31,100. The stadium opened for the 2010/11 season replacing the rather archaic, but classic eastern bloc ground of old:

The stadium is located in the south western part of the city, and a number of buses (no. 100, 502 and 514) run from the city centre out past the stadium. Arriving at the ground there was a notably huge Police presence in place which caught me slightly by surprise – what would it have been like if Lech, Wisla or Polonia were in town!?

The Legia ultras stand on the “Żyleta” (or “the razor”) which is the nickname for the north stand, and for me, if Borussia’s Sudtribune is nicknamed the ‘yellow wall’ then Legia’s ‘Żyleta’ stand is quite simply the ‘White Wall”. Ok it’s not quite the same based on sheer size or quantity of fans housed within it; but its right up there from a decibel level, as well as the fanatical commitment from the ultras to nonstop singing and chanting whilst the game is being played!

Seemingly every ultra that stands in this section must pass a dress code check that rivals the Movida nightclub in Mayfair! A white shirt or top is standard issue (the opposite of fierce city rivals Polonia who traditionally wear black) and if you’re white shirts not on then I would imagine you’re not coming in! Possession of a Legia scarf doesn’t go amiss either:

As the ground began to fill up, word started to get round that the Żyleta were not happy with the clubs decision to veto a banner that they were planning to display before kick off as part of their pre match tifo. This led to a mini Żyleta protest in the form of a subdued atmosphere for the first 15 minutes of the game. But when normal service resumed you certainly knew about it!

You can’t fail to be impressed by the volume of noise generated from the Żyleta, and when it came to every ultra raising their scarves above their heads, the sight more than matched a big European night on Anfield’s Kop! (see below). These ultras certainly know how to make a racket, and their support was relentless as they sang and chanted for the remaining 75 minutes or so after their protest.

Standing there experiencing an atmosphere and passion on this scale from a relatively small crowd was incredible. It’s something we rarely witness at English football these days – an undying commitment from fans to back their team vocally for a full 90 minutes! I’m sure the all seater stadia and prawn sandwich approach to top flight football in England doesn’t help things, but these days fans seemingly get disillusioned so quickly by watching their multi million pound teams in the Premier League, that if their team doesn’t happen to be winning by half time against inferior opposition, then the best way to show support to the lad’s is with a chorus of “boo’s’!!

I took this short video clip of the Żyleta during the game and it’ll give you a small tatse of the atmosphere:

I  have to say the game itself was fairly low on quality though, and lacked any real ‘ummphh’. That didn’t bother me in the slightest, as the ultras at the other end more than made up for the lack of quality on the pitch by their quality in the stands! If this had been in the English Premier League those ‘boo’s’ would definitely have been ringing out at half time! The pace of the game did seem notably slow in comparison to the ‘best’ league in the world. Before i get any instant bites, please note that I have thrown that last sentence in rather sarcastically, as I can’t stand that cliché when it’s used to compare the English Premier League arrogantly to every other league in world football!

The Żyleta continued in fine voice throughout the whole second half and there undying support was rewarded with two second half strikes. The first coming from Kucharczyk on 57’; and the second from their star man – Serbian striker Ljuboja on 84’.

Obtaining tickets for domestic games in Poland has become slightly trickier in recent years due to the rise in hooliganism. Overseas visitors will need to present an identification document in order to purchase one. The ticket will then have your name printed on it and is subject to further checks once you present it to the stewards at the turnstiles. Having said that, the attendance for this particular match was just under 20,000, so I wouldn’t envisage problems getting hold of tickets except for the bigger games against Lech Poznan, Wisla Krakow and city rivals Polonia for example.

To witness a full house here against one of the bigger sides must be something special, and I can’t wait for my next home appearance at the Polish Army Stadium.

Some more photo’s from the game if you wish!…. 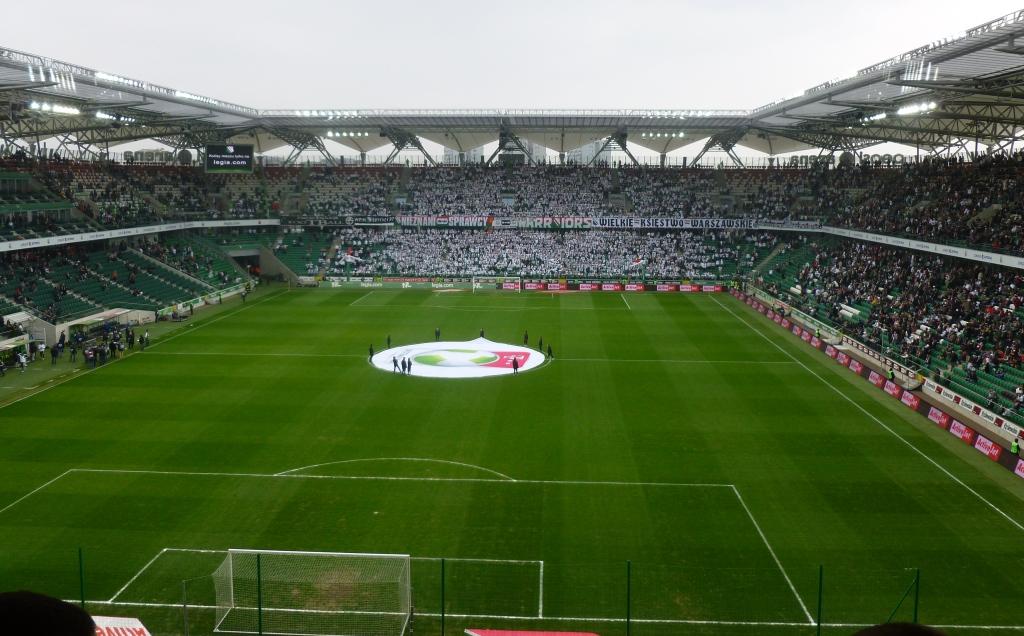 The Żyleta begins to fill up before kick off….