On good days I like to think of myself as having become pretty football savvy. That said, preparing for a weekend visiting the homes of the two Old Firm teams had me outguessing myself. Was my Napoli bobble hat too blue for Celtic Park yet too catholic for Ibrox? The myths and stories loom large and in the end I decided I didn’t need to take a hat with me after all.

First up, following a crack of dawn wake and train ride up on the Saturday morning, was the trip to the blue side of town. I have an aunt and a cousin who live near Kilmarnock and I had long planned to go up and visit…and seeing that both sides of Glasgow were at home on the same weekend helped me to speed up making my travel plans. For my relatives’ part, they were also glad for the excuse of a trip to the football- and I doubt I’ll be invited back if I don’t mention that they support Rangers and not ‘them.’

Every other club talks of their home being a fortress, but Ibrox is one of the few grounds that actually look the part. The colossal red brick face of the Bill Struth Main Stand stands resolute and unmoving and lets it be clear that this is no normal football club. The football club and its aura remain, even without Premiership status.

We trudged round in the rain to the Govan Stand on the other side and took up seats near the front. Ibrox is three sides impressive on a Villa Park scale, but while your eyes may wander they always centre on that magnificent main stand. The first two tiers were not enough, and in the 1990s, an imposing third was added. From outside that added the giant grey cape and spider web lattice that rise from the iconic brickwork, while inside it adds an almighty top level to an already grand cake. The three tiers seem to rise upwards almost vertically, with the low hanging roof creating a furrowed brow. The stand is impatient and waiting to be entertained.

For forty-five minutes legendary manager Bill Struth and his stand would have been well satisfied. Visitors Brechin City were in awe of the scene and their opponents and Rangers dominated. The defenders stroked it from side to side before a through incision was made and more often than not a chance created. Two up at the break Rangers were strolling to their twenty second league victory in twenty three attempts this season.

Brechin boss Ray McKinnen needed words and during the interval they had clearly come as his side were transformed after the break. Tackles flew in, runs off the ball were made and the visitors were soon back to within a goal when Steven Robb struck a pearler that his grandchildren will one day be hearing plenty about. Moments later Bilel Moshni kicked a ball away for the cheapest of second yellows and suddenly we were in the middle of quite a contest.

The Blue Order ultras (see below), straddled together in the corner behind the goal, kept their flags flying and their distant songs singing, but elsewhere the blue mist had settled. Back passes were met with loud grumbles while errant long balls provoked some of Glasgow’s choicer language.

In injury time all was set up for home despair with a Brechin freekick from where you’d choose to place one. Haunches were raised, as was the kick, and when the final whistle blew there was barely a satisfied soul lining up in the aisles to go back out and face the rain.

A day later and I was on my own, familial noses had sneered at the idea of a trip to Glasgow’s East End. I started my wander in the city centre where all is H&Ms and gentrified. Glasgow’s a friendly city, but the football gives it a distinct edge, everyone being us or them, them or us.

It also adds perils to direction finding. I was pretty sure I was heading Celtic Park-wards, but thought it worth checking, so asked a middle aged man walking on the pavement (use your best in-head Glaswegian accent for this ): ‘You doo noo imma Rangers supporter donya?’ Ummm. He then chuckled and pointed me in the right direction.

Past the Tolbooth Clock Tower and I was clearly in a different part of town, a different country even. Without warning the streets had been doused in emerald. The bars were Paddy’s and the shops were decorated with shamrocks. An odd experience, plenty of towns shift shades as you wander between neighbourhood allegiances, but this felt far more like a cultural, way of life, sort of a shift. 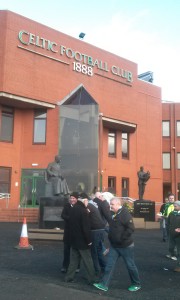 Like it or not, the Rangers fan had directed me well and twenty minutes later I approached my destination. Celtic Park is pretty huge, but a quick circumference illuminates a paradox. At the main entrance stand the three iconic statues of Brother Walfrid, Jimmy Johnstone and Jock Stein with his European Cup. However, the other steeped three quarters of the new stadium instead seem to bow down to Brand Celtic, the Nike swoosh and imagery created by the club for the consumer- not the meaningful stuff that’s self-grown and from within. I scrambled up to the top of the shiny new side and embraced a fine view of the pitch and an even better one out over the south of Glasgow. 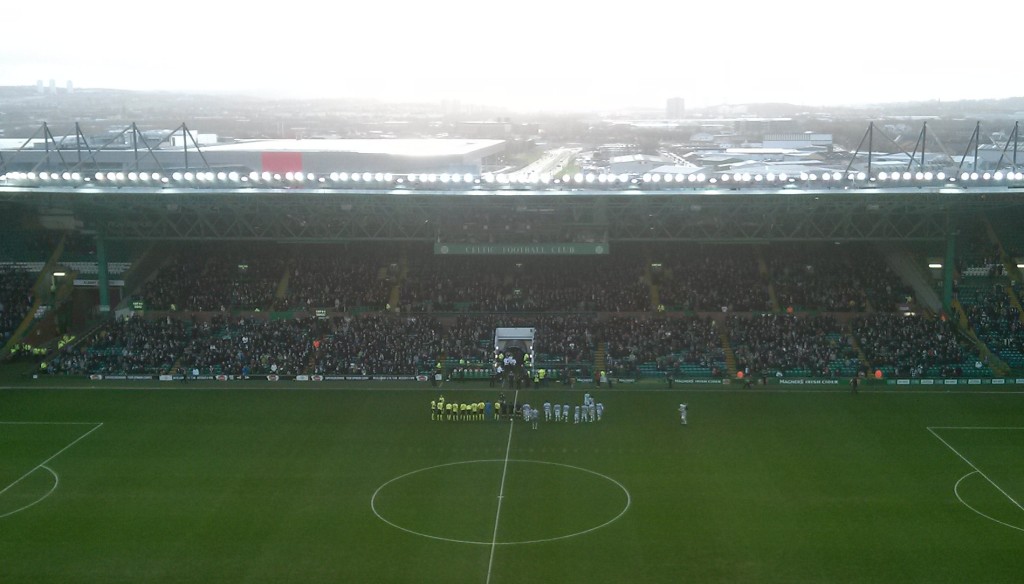 St. Mirren were the opponents and had brought barely a hundred from around the corner in Paisley. In response, the home areas contained as many empty seats as filled ones. The match started much as the one had the day before, Kris Commons somehow squirming a shot under the keeper from twenty-five yards. For half an hour the Hoops swarmed and every attack threatened a second. However, when that never came the team seemed to tire of trying, and the support did little to boost energy levels.

Thundering to a third successive title didn’t seem to be much fun with the main rivals off visiting the diddy grounds for at least another eighteen months. Throughout the Bhoys hardly mustered a chant- besides a rapturous minute in support of their manager Neil Lennon – and the noise level was rarely above subdued. While the Rangers fans were angst-filled from impatience to return to the top, the Celtic support seemed frustrated at not having anywhere higher to go.

No further goals came, and for all Fraser Forster breaking the club record with his eleventh straight league shut out and the home side notching their thirteenth SPL win on the trot, wandering out of Parkhead the team had not even recorded a par in the eyes of those trailing back home.

You’d think that winning would make you happy as a football supporter, but it’s not that simple. Victory is only triumphant if it comes along with achievement, and beating teams who you see as below you isn’t able to quench the thirst. We’re going to need to wait until Rangers are back with Celtic in the Premiership before triumph truly returns to the Old Firm.