Vienna, famous for Mozart’s classical offerings, the Schonbrunn Palace, the Museum’s Quarter, bakery chain Anker, and even an 80’s hit record by Ultravox. Ok, forget Midge Ure, but if you include Bakery advertising all of the above would feature heavily in any reputable Vienna tourist guide.

But when the tourist board wrote the brief for city tourists I’m pretty certain the category titled ‘cultural events’ wasn’t created with football in mind, and in doing so the must see ‘cultural event’ of the year that is the Vienna derby has been massively overlooked!

Compare that to other European cities such as Dortmund, Milan and Barcelona and you would do well not to find a mention of their famous football clubs somewhere in most tourist publications. In Dortmund for example a visit to the Signal Iduna Park Stadium features in the top 3 must see attractions! But here in Vienna, these two famous clubs can easily slip under the radar, and that’s a shame given the passionate nature of the fans in this city.

The derby is currently played out four times a year, and this classic ‘cultural event’ really does deserve to be profiled in its own right. I would argue that you don’t even have to be a lover of the beautiful game to appreciate the grandeur of this derby day experience, and if you experienced the atmosphere firsthand you wouldn’t fail to be impressed.

But if like me, you love your football and you’re partial to a raucous atmosphere, a few well choreographed tifo’s and a spot of pyrotechnics, then this derby is an absolute must see and you wont need much convincing. Hopefully the photos accompanying this piece will sell it to you far better than my poor attempt to write about it! But whether you prefer words or pictures I would highly recommend putting this one on your ‘must see games’ bucket list! We’ve all got one of those haven’t we?!

Both Rapid and Austria Vienna originated from the Heitzing district on the western fringes of the capital, but these days Rapid are based in nearby Huttledorf; whilst Austria have ventured south to the city’s Favoriten district.  Aside from big European nights, Rapid play their home games at the 18,500 capacity Gerhard Hanappi Stadium which is conveniently located right next door to Huttledorf Station on the U-Bahn line No.4.  Coloured green on the U-Bahn maps, and coincidentally matching Rapid’s clubs colours, the U4 journey out to Huttledorf takes roughly 20 minutes from the ‘Karlsplatz’ stop in the city centre.

As you exit Hutteldorf station there are three or four bars in close proximity to the stadium, including the ‘Gastwirstschaft’, which also has a covered beer garden serving ‘Gusser’ beer in cans, a range of spirits, and a few unusual concoctions such as a Bailey’s hot punch! The latter more for the ladies, and with my wife in tow she was duly tempted into this unusual winter warmer! The ‘Gastwirstschaft’ is situated on ‘Kiesslergasse’ street by the station and is literally a minutes’ walk away from the turnstiles of ‘Block West’ and the ‘Sudtribune’; and makes for an ideal place to have a quick pre match pint or two.

Match tickets were surprisingly easy to get hold of, even for an overseas football tourist. After an initial one day sales window for club season ticket holders and members, the following day opens up as the general sale. You will need to register an account on the club’s website, but with the aid of Google translate I was able to buy two tickets to the 308th Vienna derby. You will be restricted to purchasing tickets in either the North or South tribunes, as the West and East tribunes house the Rapid ultras and the away fans respectively and are off limits unless you’ve got someone in the know. On the plus side you get great views of both the game and the ultras.

To be honest the reputation of the clubs supporters more than the football itself was the main reason I had come out to visit this derby. Don’t get me wrong I love the ‘beautiful game’ and will watch almost any level of football given half the chance, but throw in a match played to a backdrop of passionate supporters who are renowned for creating an electric atmosphere, and I’m absolutely all over it! And it that regard Rapid Vienna certainly doesn’t disappoint.

Onto the Ultra’s then, and Rapid Vienna’s main ultras group are simply known as ‘Ultras Rapid’ and stand in the Westtribune or ‘Block West’ as it’s known to the locals. The Ultras Rapid group celebrated their 25th anniversary last year by unveiling some incredible tifo’s and fan choreographies, which although viewed on the Ultras-Tifo website more than caught my eye and tempted me into booking this trip up some months ago.

The entrance to ‘Block West’ marked by Ultras Rapid graffiti….

Austria Vienna’s main ultras group are known as the ‘Fanatics’ and their banner took centre stage in the Osttribune. What was also immediately noticeable, but slightly unusual, was that the Fanatics had carefully split themselves up into two distinct sections, one set of fans wearing purple beanie hats, and the other wearing white ones! Maybe this was a clue to their pending display, but either way I’ve never seen a set of football supporters choreographed by their choice of headgear!

The Austria Vienna Ultras and their choreographed Beanie hats!….

Whilst on the subject of club coloured clothing garments, it seems only appropriate for me to share a second, but slightly more bizarre clothing moment with you. Each to their own and all that, but turning up to a ‘derby’ in your club coloured dressing gown is taking things to a whole new level (see right). Confidence, arrogance, “cool as you like” or just down right ridiculous? I’ll let you be the judge!

As the teams emerged from the tunnel the much anticipated Ultra’s displays didn’t disappoint. Rapid’s Ultras decorated three sides of their stadium in their famous green and white, and Austria’s their famous purple and white (see photos below). In Block West the Ultras Rapid unveiled a large banner fringed by supporters waving thousands of colour coordinated flags. This was made even more impressive by said banner being reversible, which was then skilfully and smoothly rotated to reveal the clubs crest. Sounds simple doesn’t it?…but how many times have you seen a large banner unveiled in English grounds where it’s either up upside down, lop sided, and generally viewed as a crumpled mess as it scruffily gets passed along the stands!? Not here, the Ultras Rapid are a well oiled outfit, 10 out of 10 for execution!

No pun intended here but the game got off to a rapid start! Played at a staggering pace and intensity there was barely time for players in the midfield areas to take one touch of the ball let alone two, and early on this match resembled a game of pin ball more than it did football. Despite the frenetic start, Austria Vienna produced a moment of brilliance – a stunning combination of three one touch passes in midfield that split the Rapid defence wide open. Despite my calls for offside (I was sat right in line and he looked 2 yards off!) the linesman waved play on and De Paula raced through one on one and coolly rounded the keeper to put Austria one up on 26 minutes in front of the ‘Fanatic’s’. Cue jubilant scenes in the Osttribune!

As soon as the Osttribune returned to some form of normality, my eye was momentarily turned once again by what appeared to be a man selling small loaves of bread from a large basket! As he neared our section of the stand it was actually giant sized pretzels that he was selling, and believe me, they were selling like hot cakes, sorry, like giant pretzels do here! As the pretzel man then moved onto another section, cue the arrival of the “beer girls!” Yes you read that right, the “beer girls!” You tend to get thirsty after a dry salty pretzel, so what better way to wash it down than with a cold beer brought right to your seat by one of the Rapid Vienna beer girls. The club appear to have got their refreshments marketing spot on. Happen to have a small child with you for the big game who isn’t quite into ‘it’ as much as you are? Do not fear! A man selling huge chocolate covered marshmallow cones will make your day. For 2 euros you won’t hear a peep from the kids for the rest of the match!

This is the way football should be though isn’t it? Why not be able to enjoy a beer whilst the games going on, instead of having to leave the action on 40 minutes (as you would do in England) to avoid massive half time queues to treat yourself to a warm bottle of Carlsberg. I’ve experienced this same set up now in Germany, Czech Republic and Slovakia, and this part of the world seems to have it right if you ask me.

It was a good job that I didn’t leave my seat to queue for that half time beer. If I had I would have probably missed Rapid’s equaliser! A free kick, awarded in a position that would have had any dead ball specialist watering at the mouth, was beautifully struck to leave the keeper flapping at thin air. The ball smacked back off the crossbar and into the six yard box and rebounded back off Austria Vienna defender Rogulj for a somewhat unfortunate own goal. As the ball trickled over the line the keeper was still lying outside the left hand post like an upturned beetle having made a flying attempt to save the free kick! Cue wild scenes in Block West!

As the teams re-emerged for the second half they were greeted by another round of choreography from both sets of ultras. This time the ‘Fanatic’s’ opting for a spot of pyrotechnics, which I have to say made my afternoon, and ‘Ultra’s Rapid’ opted for some more mass flag waving! 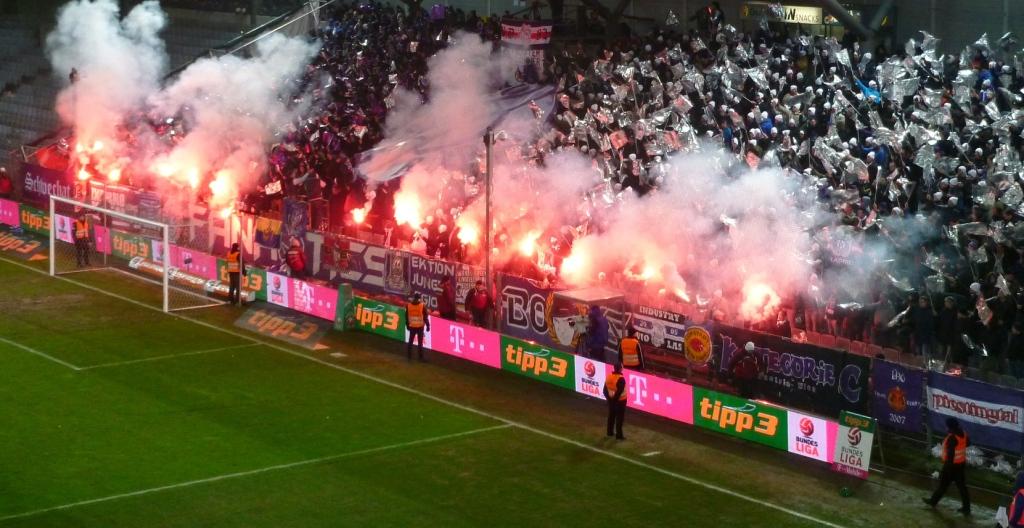 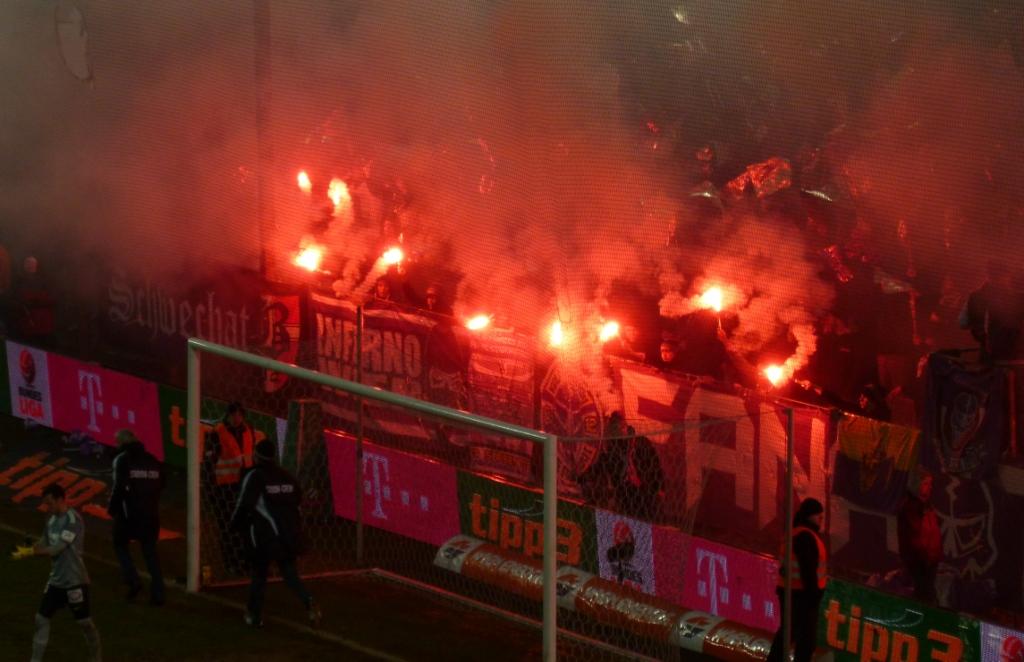 As the second half progressed Rapid began to take control of the game, and their dominance was only momentarily interrupted as the ‘Fanatic’s’ unveiled some blow-up dolls dressed in Rapid Vienna colours (see photo below). I won’t describe what became of those blow-up dolls, but it’s fair to say that it was more than derogatory and a provocative attempt to incite the Rapid fans.

Rapid fans had the last laugh though, as rather ironically Sabitzer and Sonnleitner shoved the most important blow up item of the day into the back of the Austria Vienna net twice in the final 10 minutes to seal a proud victory. Firstly Sabitzer scoring with a headed goal on 80 minutes to make it 2-1, and this was quickly followed up four minutes later by Sonnleitner’s well taken finish from a narrow angle. Cue more wild scenes and pyro madness in Block West!

The game finished 3-1 to Rapid, and seemed to pass by in an absolute flash. The atmosphere here was amazing, and with plenty going on in the stands as well as on the pitch it wasn’t easy keeping your eye on everything all of the time! This derby experience is right up there with some of the best I have experienced across Europe, and if you’re becoming bored of the sterile English game and seeking out a new footballing high, then you could do worse than plan a weekend trip to the Austrian capital for a taste of derby action. Just don’t forget to take your dressing gown!

You can see more pictures from the Vienna derby by clicking on the link below: