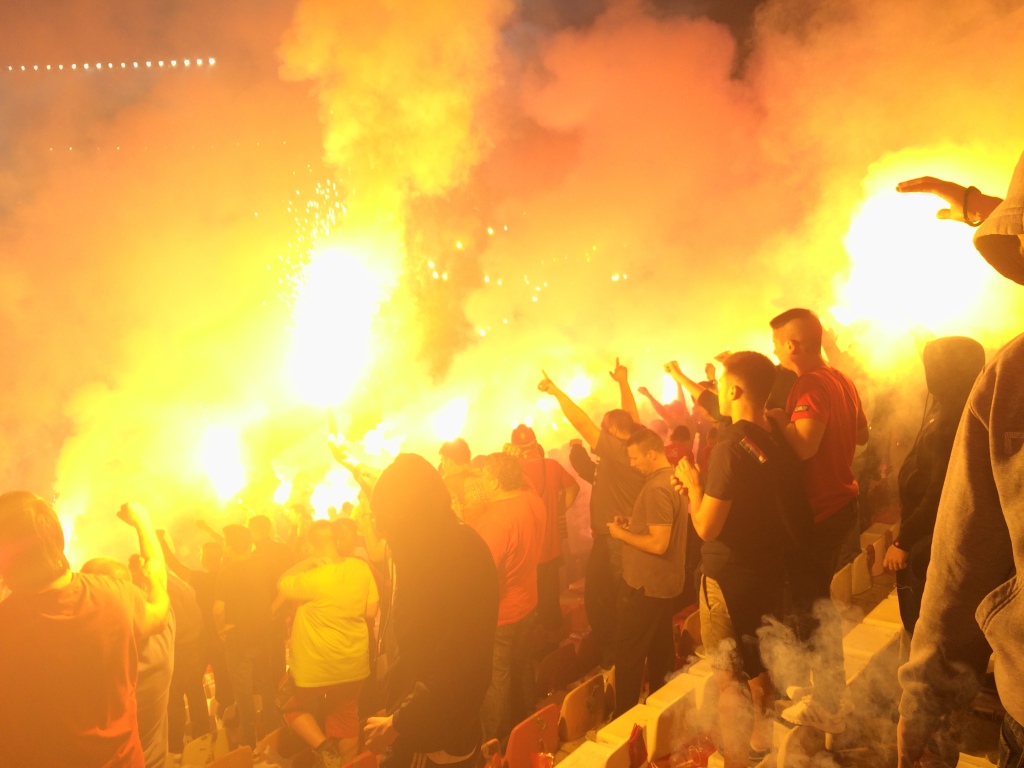 Rhys Hartley opens up his Serbian football adventure with the infamous Eternal Derby; one of the most awe inspiring and mesmerising fixtures in world football….

Whilst I’ve watched a lot of football across Europe, unfortunately, the major derbies have eluded me. I’ve managed some minor ones such as the supporter-less Olimpik Sarajevo v champions FK, and the two smaller Bucharest clubs, Dinamo v Rapid, but never any of the big ones. As I was moving to Belgrade, I knew I’d have to visit the ‘Eternal Derby’ between Crvena Zvezda (Red Star) and Partizan.

Imagine my delight when I found out that the first derby of the season was taking place on my first weekend as a student in the Serbian capital!

My Dad came with me to carry the extra bag and, naturally, he was just as excited as I was. He was frantically searching the internet about ways to get tickets before I calmed him down and let him know that it would be no problem.

Quite how easy it would be was a shock even to me. There was none of the extensive formfilling I’ve been forced to do in Poland, none of the passport copies and general hassle like in the Netherlands. We simply showed up 24 hours before kick-off, paid 600 RSD (£3.50) and there we were. ‘If it’s that easy, is this really going to be that hostile a game?’ I wondered.

We’d seen some police around the ground receiving orders for the big day but upon looking into the stand, we saw what seemed like a full-scale military operation. Each police squadron, army battalion and gendarmerie was being given its orders and was doing trial runs inside the empty 55,000-seater bowl (see below). Maybe it was going to be intimidating, after all.

As the sad sods we are, we took a look around the ‘Marakana’ – the name given to the stadium after 110,000 fans squeezed in to watch the 1963 derby. To our delight, we found a club shop and Ultras shop opposite each other on the concourse.

The club shop, as usual, was kitted out with replica kits and all sorts of wear bearing the club’s crest. The Ultras’ shop, however, sold similar gear but all containing the ‘Delije’ logo and most containing intimidating images of crowds or depictions of wars or fighters (see below). 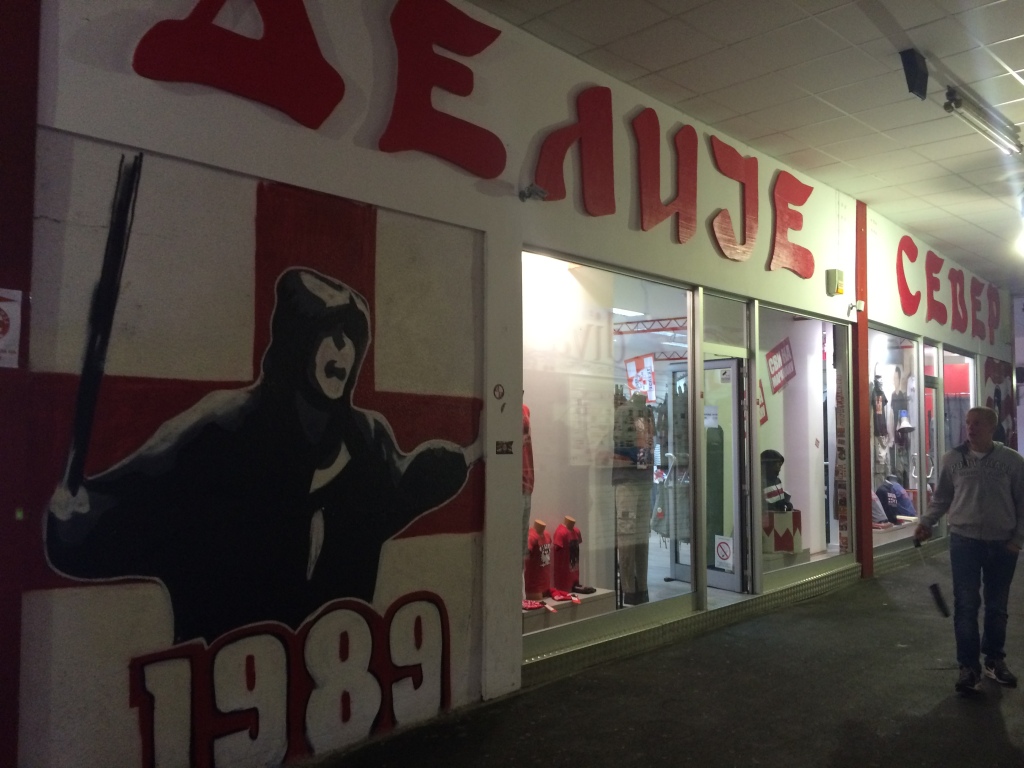 The ‘Delije’ (Heroes) were formed in 1989, as Serbian nationalism took hold in the Yugoslav republic, to unite the various Ultras and hooligan groups. They lay claim to the spark of the Yugoslav War in 1990 as they clashed with Dinamo Zagreb fans just months after the first multi-party elections in Croatia, and take pride in their involvement in the War, with a paramilitary battalion of ‘Delije’ fighting in Croatia and Bosnia.

Both inside and outside the stadium, the walls are covered in murals to ‘Delije’ and graffiti sprawls across the city with the Zvezda Ultras competing with Partizan’s ‘Grobari’ to lay claim to the city.

We were told by the ticket-seller that we should arrive the ground ‘at least’ an hour before kick-off. So after a few flat-viewings and a look at my university faculty building, we walked towards the ground. With about an hour and a half to go before kick-off, we were surprised to see that very few of the bars and kafanas (pubs) were full – maybe they’re already in, we guessed. (I later learnt that there’s an alcohol ban within a certain radius of the ground.)

There was a steady increase in the number of riot police along our walk and we noticed a few parks empty, but surrounded by police. As we came to the main junction where the road forks off to either the Marakana or Partizan’s ‘JNA Stadion’, we were blocked by a row of heavily-armed police.

As a seasoned football traveller and being used to the ‘bubble’ trips that following Cardiff City forced us to endure, we knew what was coming next. The beat of a drum and a low chorus grew nearer as the Partizan fans made their way around the bend and towards us. A few people tried to get round the back of the nearest kafana and towards them but it was futile, the police had cordoned off any possible way of getting to them.

A few bottles and flares were thrown in our direction but none threatened to make contact. However, I was quite impressed by the lack of ‘wannabes’ standing and goading as I had been used to when approaching the Liberty Stadium in Swansea. But somehow this felt a lot more intimidating. The calm before the storm, perhaps.

After a lengthy wait and with the Grobari cleared, we were able to make our way towards the ground. From all directions, fans flooded, as we had all been kettled in the same way. With an hour until kick-off, we heeded the advice of the ticket-seller and made our way in.

A thorough body search led to Dad having £10’s worth of coins being taken off him, much to his annoyance. But we were in and we expected that nobody could put a price on what we were about to experience.

Belgrade’s ‘Indian Summer’ meant that it was scorching hot in the sun, so we took the opportunity to catch the last rays of the summer on the left hand side of the stand, among but not in the heart of the Delije.

As in our end, a steady flow of black and white continued to fill the stand opposite but the atmosphere remained quite subdued, except for the customary burning of the Partizan shirt on the fence.

It remained quite quiet and we were beginning to worry that it really wouldn’t live up to the hype. The plastic sheets for the ‘tifo’ were being used as seat covers to stop people’s arses from getting dirty and the ‘kapo’ stands remained empty. That was until 10 minutes before kick-off, when some chanting started in the corner nearest to the Partizan fans.

Naturally, we assumed that they were Zvezda supporters, being in the home end, until we realised that they were chanting back and forth with the away end and then decided to ‘charge’ the stand. It seemed like posturing as the few police and stewards would have been no match for them if it came to it, but they didn’t attempt to break the line and instead a reinforced line of police showed up to stop any further problems. With all the security involved, however, it’s quite ridiculous that so many Partizan fans were able to get tickets in the home end.

Anyway, the atmosphere had now been sprung into life and the tifo was unveiled at kick-off at the command of the kapos at the front of the stand. As we were involved it took a while before we could see what it was, the red and white of Zvezda either side of a huge portrait of a lion mauling a zebra. A metaphor for what was to come, perhaps?

The tifo remained aloft for a good 10 minutes and the singing remained at the same level for 90. We most certainly were not to be disappointed. My limited Serbian only managed to account for about 20% of the chants, which seemed to mostly involve ‘Champions’, ‘better’, ‘red’ and ‘above’, as well as some unpleasant references to their opponents.

On the pitch, the match was just as fiery, with the referee managing excellently to keep his cards in his pocket until it was absolutely necessary. Zvezda dominated the opening proceedings and took the lead though a cute finish from Hugo Vieira in front of the visitors.

Cue wild celebrations in the Northern Tribune and a barrage of chairs being thrown towards the goalscorer from the riled visitors. But the chant never stopped, rather the decibel levels simply increased and the terrace began to shake a lot more as the adrenaline levels grew and the fans jumped in unison to ease the tension.

Partizan fought back strongly and got their rewards just on the stroke of half time, splitting the Zvezda back line to equalise. It was the turn of the Grobari to celebrate and a wall of white flames erupted. Whether this was choreographed for half-time or for a goal, I don’t know, but the whistle went and all of a sudden we couldn’t see the pitch.

It remained that way throughout half time but the Delije were not to be silenced. They continued to chant and, bizarrely, the entire middle of the stand took their shirts off and began waving them above their heads while chanting along together. For me, that was almost up there with the pyro. Truly an experience!

The second half had barely got going when Zvezda’s lead was resored. Vieira again the scorer, this time firing home an unstoppable strike which crashed off the crossbar from 25 yards as the defenders hesitated. A goal worthy of winning any derby, like Bellamy’s away at Swansea or Briggs’ free-kick for Clapton against London Bari. (Pardon the cliché but I like any excuse to mention them.)

Whilst the fans were still celebrating – congratulating each other with hugs and continuing to jump up and down – Zvezda made it 3-1 through another good strike. This time the celebrations were among the best I’ve ever witnessed.

Forza Clapton!  Pyro is becoming a frequent sight in the East End of London…

Having followed Clapton for the last few seasons, I’m used to some pyro and rate our anti-homophobia solidarity display last year as one of the top footballing experiences of my life (see photo above). However, this was something I have never witnessed before. Before the players had returned to the centre circle, the stand was ablaze with red flares dotted around the entire North Stand. 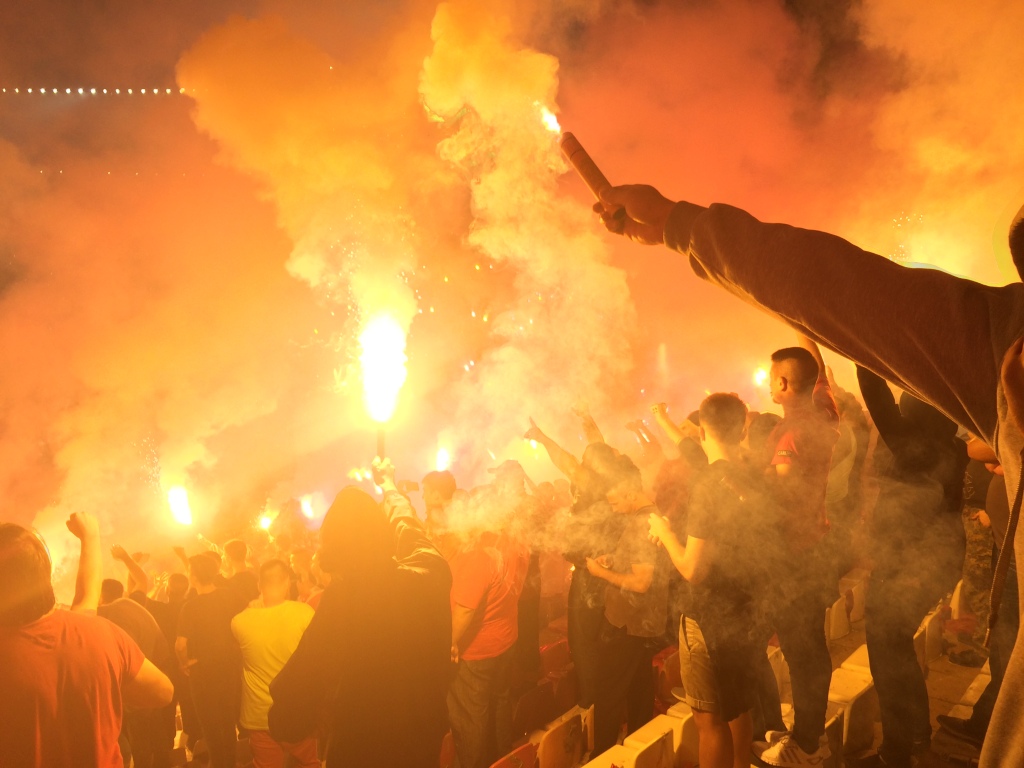 It’s flares o’clock at the Marakana!…

As we struggled to breathe, the adrenaline generated by being part of such a scene carried us through to continue jumping and join in with the ‘la la la’ parts of the chants.

Of course, as happened with Partizan’s equaliser, we now couldn’t see the pitch and the game was stopped until the smoke had cleared. All par for the course, it seems, as no police intervened and nobody was under any threat. It really does make you wonder why we can’t have anything like a rational debate about pyrotechnics at home – but that’s for another day.

Zvezda saw out the rest of the match and the fans engaged in some exchanges of messages between each other – spray paints on sheets. I couldn’t work out what most of them said, although I was disappointed to see ‘Gay Pride 20.09’ mentioned on one. I assume it wasn’t in support and fear it, rather, a threat.

As is the case pretty much everywhere outside of Britain, the players made their way over to the fans and joined in with the celebrations. At Clapton we’ve managed to get the team to do this too but I still get emotional when I see it as it really reaffirms my love for the game. The fans chucked the megaphone to the players and they led the chants with everyone, player and fan alike, dancing wildly.

We wandered back into town with some shivers as though we’d had some sort of religious experience. Silly? Well football is as close to religion as it gets for us. We were slightly disappointed that the singing didn’t continue outside the ground but we were left suitably satisfied with one of the best footballing experiences ever. Dad’s already looking into flights for the return match, despite not getting his £10 back.

This is the first in a series of articles on football culture in Belgrade. There’s more to come from Rhys, so keep an eye on the site! You can also follow Rhys on twitter @HartleyR27