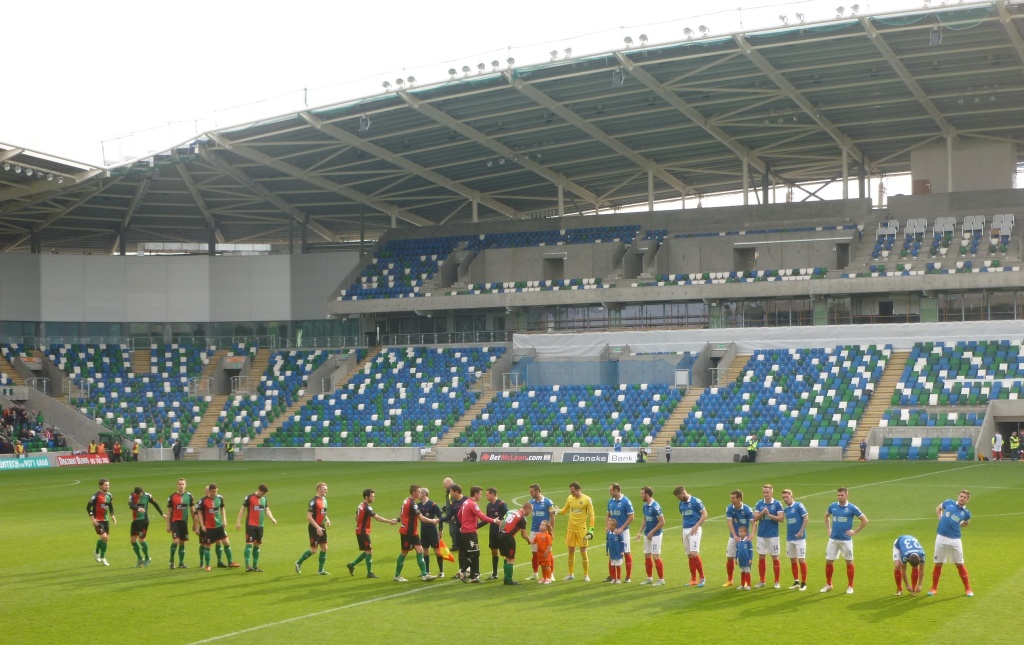 When you plan a football weekend away with your mates, one of the first hurdles to overcome is to obtain a green light from the respective WAG’s. Once that path has been collectively smoothed, the second conundrum is to work out where you’re off too. Many will head straight to the “Big Guns of European Football” fixtures manual, and games like the El Classico, the Milan derby and the Rome derby are naturally headline acts for football tourists. If you’re a veteran of overseas football trips then perhaps you’d be tempted to head further east for some madness in Serbia or Greece?

But when your surname happens to be ‘Linfield’, and you’re passionate about football, there’s only one destination at the top of your footballing bucket list. That’s right, Belfast! Home to Irish Premier League club Linfield. A close friend of mine, Nathan Linfield, had been double keen to visit Belfast for years, and had often mentioned it over a pint or six in the pub. It didn’t take much persuasion to get me interested, and deep down I was already ‘in’ before Nathan made the call. In fact it was me that ended up making the call to Nathan! This trip was only a matter of ‘when’ not ‘if’!

So, if you’re going to make the effort to see your namesake football club you might as well go the whole hog and visit on derby day! Linfield v Glentoran. The Big Two. The Bel-classico! Rhetorically known as Northern Ireland’s biggest domestic fixture there is a fierce rivalry between these two clubs. Glentoran hail from East Belfast, Linfield from South Belfast. It would be easy (or ignorant) to assume that there is a unionist and nationalist history between these clubs that fuels the rivalry – but you’d be wrong. Both clubs have a traditionally Unionist supporter base with strong protestant links. Linfield’s Windsor Park Stadium is based in a dominant protestant community, and this along with the reputation of the club’s supporters over the years has often seen Linfield regarded as a club associated with sectarianism and violence.

The cabbie that collected me from George Best Airport likened Linfield to ‘Rangers’ (no, not QPR, the Scottish one!), and the Union Jack flags that can be seen hanging from houses in the tightly packed terraced streets that surround the ground, provide a similar feel to those that hang on the streets of the London Road close to Celtic Park.

So what do we know of Linfield FC? Well, quite simply they are Northern Ireland’s most successful football club. But rather than bore you with a long list of dates of domestic league titles and cup wins, I’ll move straight onto the eyebrow raising fact that they hold two world records! Yes, you read that right, and football pub quiz fans take note!

Linfield have clocked up a ridiculously impressive 125 year consecutive run in the top flight since the inception of the Irish League back in 1890. In terms of domestic success Linfield have won an unprecedented 52 Irish League titles, which is the second highest haul of domestic top flight titles won by any club worldwide. Who’s at the top? Rangers. (No not QPR – the Scottish one!)

With that many domestic titles under their belt Linfield aren’t strangers to forages into European football. Random excursions into the qualifying rounds for the pre qualifying rounds of the Champions League and Europa League are regular jaunts in July each year – affording the Linfield faithful some alternative holiday destinations! Having said that, perhaps a time-share deal on the Faroe Islands would have sufficed as remarkably they have played four different teams from the Faroe Islands in the last four seasons alone at the 1st pre qualifying stage!

Linfield’s finest moment in Europe came during the 1966-67 season when they reached the quarter finals of the European Cup. Remember the days when the European Cup was only for true Champions, and when every match was a kill or be killed game at each stage of the competition? When you consider the format of European club competition today, rather surprisingly Linfield only had to play two ‘two-legged’ rounds to reach the quarter finals, defeating Aris Bonnevoie of Luxembourg in the 1st round, and Valerenga of Norway in the 2nd round. A narrow 3-2 aggregate defeat to CSKA Sofia in the quarter finals meant a glamour tie against Inter Milan in the semis was just out of reach. A top effort nonetheless! 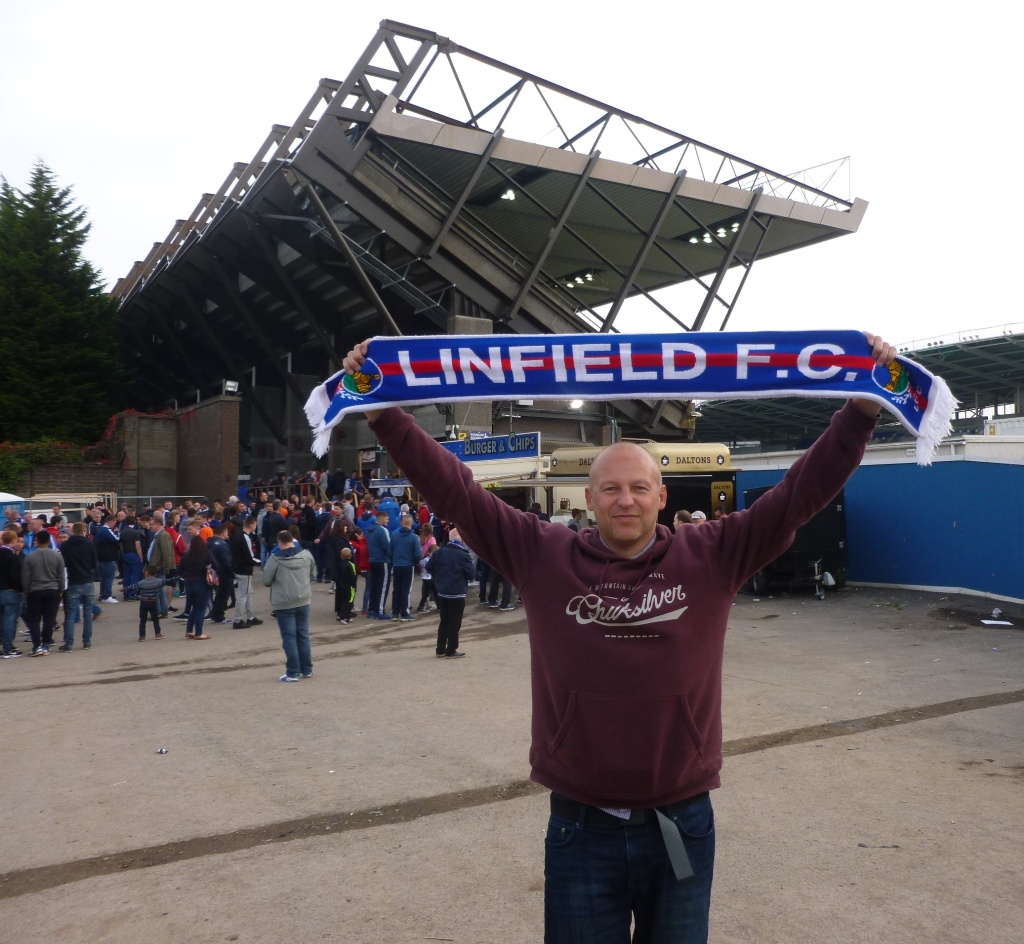 Nathan fulfils a life long dream of holding a Linfield scarf above his head!….

….thanks to the kind hearted fan who gave up his scarf when he realised there was no club shop for Nathan to grab a prized souvenir!…

Linfield’s home ground is the Windsor Park Stadium, and the football club doubles up as landlord to the tenant that is the Irish Football Association. The IFA leases the ground for Northern Ireland’s international home games and Linfield reportedly receive an estimated 15% of international gate receipts as rent. This ‘arrangement’ is not viewed favourably by other clubs in the Irish League who see it as unfair advantage for Linfield, affording them a higher operating budget which in theory allows them to offer more attractive wages and have a larger squad than all of the other clubs in the League.

Windsor Park is a 30 minute walk from central Belfast, and there are plenty of bars along the way to break up the stroll if you need it! The stadium was partly under construction, as the home of Northern Ireland’s international football is converted into a modern all-seater arena. The venue looks impressive from the inside, but from the outside it resembled a building site. A temporary ticket office located in a portacabin in the car park; no sign of a club shop or even a scarf seller (which came as a major disappointment to Mr Linfield!); and portaloos lining the entire length of the main stand provided the aesthetics of a stadium very much in transition.

Tempers flare in the Bel-classico!…

Putting the aesthetics to one side, Irish football is really cheap, and £10 gets you a seat anywhere in the ground. In fact £10 appears to be the consistent going rate anywhere across the entire league. Hats off to affordable football! Only the two tiered North stand was open to home fans, and the new east stand behind the goal to our left was dedicated to the fans of Glentoran who had made the short hop across the city. The main stand opposite us was closed off and the other end was still under construction, affording open views out over the hills surrounding the capital city.

I’m not sure what I was expecting from the ‘Big Two’ derby, but the half empty stadium certainly contributed to a surprisingly subdued atmosphere. That was until a group of about 50 Glentoran fans entered the stadium about 10 mins after kick off, and immediately set off a green smoke pyrotechnic. The smell of sulphur encompassing the ground coupled with some echoed chanting aimed at the Linfield fans in the upper tier livened things up momentarily.

Whilst those late arriving supporters had a spring in their step, in terms of the football, the first half was really low on quality. Both sides frequently conceded possession with a range of misplaced passes that led to a building sense of frustration in the stands. To the bemusement of the fans there were simple 5 and 10 yard passes going completely astray. All of a sudden you fancied your own chances of pulling on a shirt and looking ‘half decent’!

Linfield’s 3-3 draw with Cliftonville the week before had made things much tighter at the top of the table than perhaps it should have been, and you could sense an air of expectancy from the Linfield fans that their team would put things right in the derby. Unlike the earlier smoke bomb, the first half fizzled out like a damp squib, and a splattering of “boo’s” helped the players to reflect on a poor first half performance as they trundled off to the portacabin changing rooms outside.

I’m not sure whether it was teacups, hairdryers or an arm round the shoulder at half time, but whatever it was, thankfully the second half kicked into gear and Linfield started to reward the fans first half impatience. A raised tempo and more incisive play started to see Linfield ‘get in behind’ the Glentoran back four. After a few near misses, Linfield finally got the breakthrough their early second half play deserved. A patient well worked five pass move that started with a throw out from the keeper, saw a neat through ball slid through the back four by Guy Bates to release David Kee, who then with only the keeper to beat finished neatly from the angle. One nil to ‘The Blues’.

Linfield’s second half performance pretty much restricted Glentoran to occasional counter attacks, and as the game drew to a close it looked like Linfield would see things through, take the three points, and bag the derby day bragging rights to boot. But in football, and certainly at 1-0, it’s a bit like a Lenny Kravitz hit record – it ain’t over til it’s over – and an injury time corner swung deep to edge of the penalty area was headed back into the box, where Curtis Allen produced a superb scissor kick to put the ball into the top corner and grab an unlikely equaliser on 93 minutes. Cue wild celebrations and more green smoke pyro in the away end. Cue disappointment, frustration and obscenities in the home end. Quite literally the last kick of the game and a dramatic end to the Big Two derby! 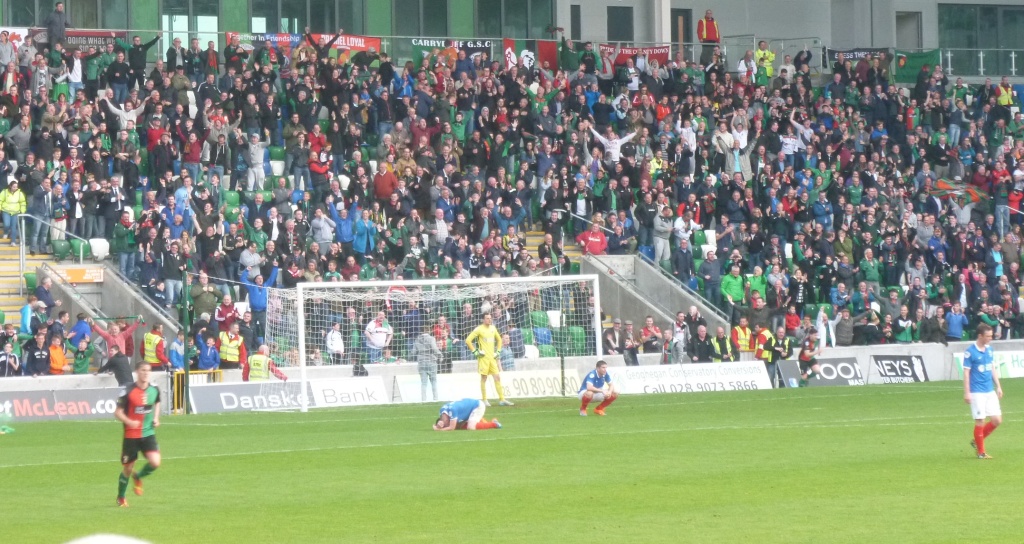 On their knees…a devastating injury time equaliser in the Bel-Classico!…