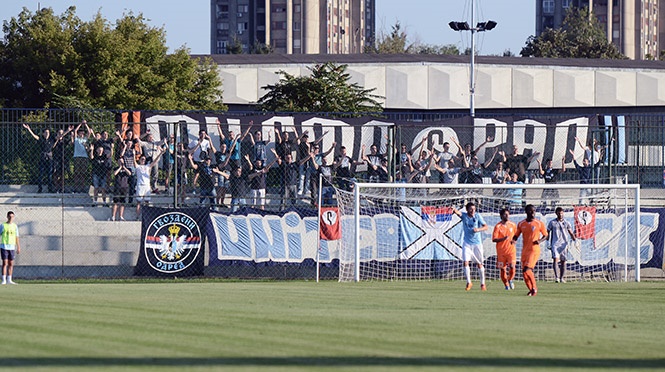 ‘Even the Delije and Grobari guys I know have said this lot are crazy,’ said a mate of mine when I mentioned I wanted to see Rad. The ‘United Force’ are the most right-wing fans in Serbia – quite a title considering my first experience of Serbian football saw the Welsh under-21 goalkeeper racially abused with monkey chants for 90 minutes in Novi Sad in 2003.

We’d been to the Red Star – Partizan ‘Eternal Derby’ the day before and as it was my Dad’s last day in Belgrade, we thought Rad at home to Spartak Subotica would offer the best ‘experience’ for us – a story to tell, perhaps. 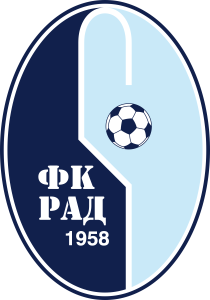 As with most clubs in Serbia, Rad are struggling to attract fans and I can’t see their politics appealing to more than a, hopefully, narrow base of Serbian society. Indeed, if it weren’t for the riot vans driving around the ground for hours before kick-off, you’d have struggled to notice a game was going on. Unfortunately, this afternoon was not to be a memorable one.

The last of the summer rays shone down over Belgrade so we took a leisurely walk alongside a nature reserve to get to the ground. We weren’t sure of the way so we turned up a few hours early and, lo and behold, there was a bar.

‘200 RSD (£1.25) for a beer? You must be joking.’ I’d already started to go native with the pricing and I thought this was too much. Unfortunately, we couldn’t spot anything else in the vicinity of the ground so we settled ourselves outside catching our last tan of the summer.

It turns out we were drinking in the bar of a tennis club and just like at home it seems tennis is quite an elite sport. The focus of the afternoon certainly wasn’t on the football a hundred yards away, nor even the numerous tennis matches at the club. Rather, everyone was fixated on the big screen where Serbia were playing basketball in the European Championships. Basketball? No, me neither.

The riot van drew up to the makeshift gate opposite us a couple of hours before kick-off and so we got a bit excited. Surely this means a big crowd. With an hour to go, we moved on for a walk around the ground and to our delight, found a ramshackle little bar next to the entrance with a much more affordable (140 RSD) beer.

We were asked to move inside by the little old lady in charge of the place. ‘Policija,’ she said with a slight frown. My Serbian was good enough to understand that and so our hopes of a large crowd grew greater.

Our appetite was further whetted when we saw a rusty old riot van drive pass, followed by a coach. We hadn’t expected many to have made the trip down from Subotica, a city a few hours north of Belgrade in multicultural Vojvodina. Perhaps, a busload of away fans would provoke a reaction from the nationalist Rad boys? 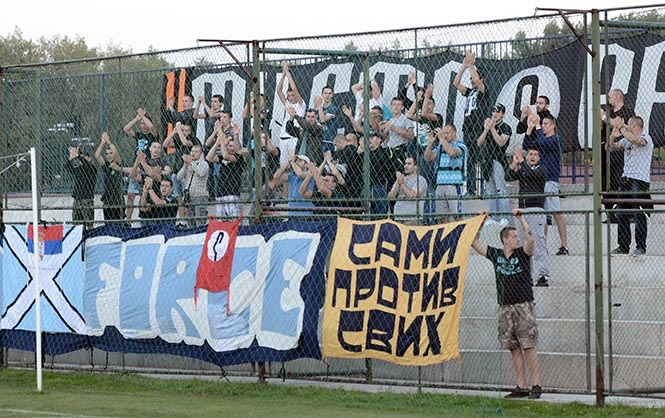 Much to our surprise, after presumably ensuring the away fans were locked in the terrace, three policemen made their way into the bar. Had they come to check on us? What was our story? Unfortunately, we weren’t the centre of attention and the same police that made the old woman so nervous, casually sat down and ordered three beers. The police were now drinking the very beer they were meant to be restricting! It was quite funny until I realised that they were all carrying guns.

The police left, thankfully only after a single beer, and were replaced by some other football tourists. We listened intently and came to the conclusion that, like us, they had come over for the derby the previous day and stayed on to take in an extra game. Groundhoppers of the world unite!

We downed our beers and made our way towards the entrance, back around the ground to the Ultras’ terrace. One large ‘United Force’ flag adorned the front fence with about 20, mostly young, men stood behind.

It was my first weekend after moving to the Balkans. I wasn’t sure what to expect and was a bit nervous of this far-right lot, so thought it better to stand a bit to the right of them. My Dad and I stuck out like sore thumbs but I hoped that nobody would make the effort to come and question us. 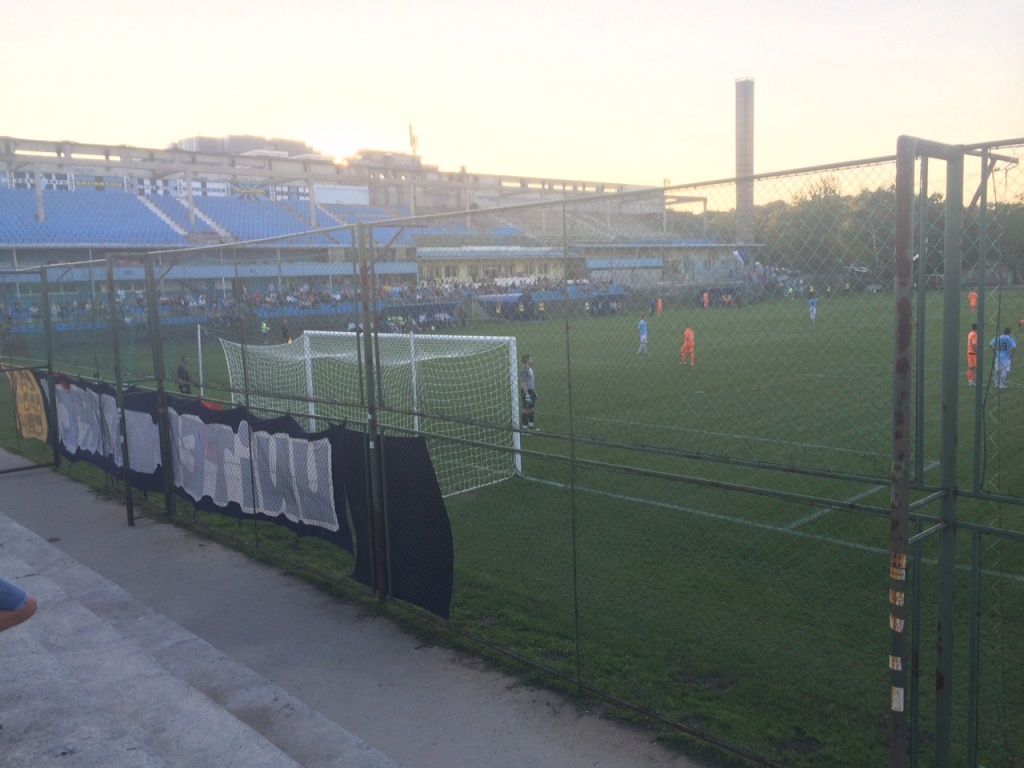 As the teams made their way onto the pitch there was an eerie silence around the ground. None of the supposed passionate ultras made a sound and the away end, despite their flag-waving, offered nothing either.

The players lined up and, to this day I don’t understand why, gave some sort of salute to the main stand and the grassy knoll opposite. This occurs at every league game in the Serbian pyramid and always strikes me as strange. It’s somewhere between a militaristic salute and a pathetic token gesture of respect to the fans – even stranger when one side is completely empty.

Spartak started the brightest and the visiting fans finally got into their stride with non-stop singing and flag-waving. It left us sorely disappointed that we were stuck with the dull home fans. However, the home fans sprang into action as Rad took the lead early on completely against the run of play with a well-worked counter-attack. As the drum began, the typical Balkan low-pitch chanting provided a sort of bass-line to the beat.

It was one-way traffic for most of the first half, with Rad unable to hold on for more than 10 minutes. The visitors’ tricky right-winger ran the show, providing the cross and break that led to both, almost identical goals, to put Subotica ahead at the break.

Much like the first half, Subotica dominated for most of the second half but resorted to playing dirty to break up the Rad counter-attacks. They accumulated five yellow cards but it seemed to work as they went 3-1 up with relative ease, not long after the break. 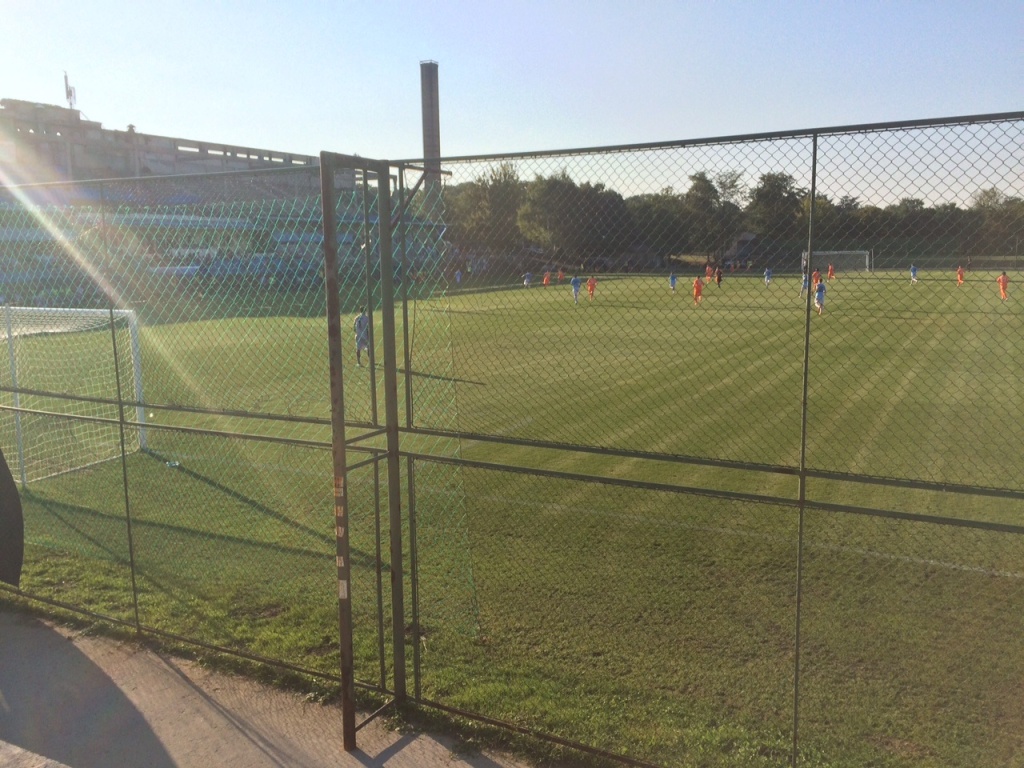 Rad looked dejected and out of ideas, and the fans’ only contributions seemed to be one guy exclaiming from what my limited Serbian could understand racial slurs about the ‘Magyars’ and ‘Roma’. It says a lot about how far the game has come in Serbia that even amongst the ‘most right-wing fans’ the only evident racism was from one lone idiot, much as we see up and down the UK on a weekly basis. The battle is far from won but it’s an immeasurable change from 2003.

With the game petering out, were tempted to get out of there early and head across the neighbourhood to watch Voždovac’s evening kick-off. Thankfully, we remained on the terrace as Rad were awarded a very soft penalty for, seemingly, a push. The linesman on the goal line gave it after the ref waved play-on, in what I think was the first contribution I’ve ever seen one of those goalside officials make.

The hosts continued to toil after converting the penalty and managed to finally break the visitors’ resolute back line in stoppage time. With the ball bobbling across the box, the attacking midfielder kept his composure and slotted home from close range. For the first time all afternoon, the singing from the away fans in the far corner stopped and the Rad lads showed some passion in the form of hugs and waving arms in our end.

As usual, the players came over to thank the fans and join in the celebrations and, for me, this always makes up for however disappointing the day has been. Having felt neglected for years watching Cardiff City, I really appreciate players’ showing at least a token of respect for fans. Indeed, the visitors too went to their travelling fans and shook hands with them all individually too. 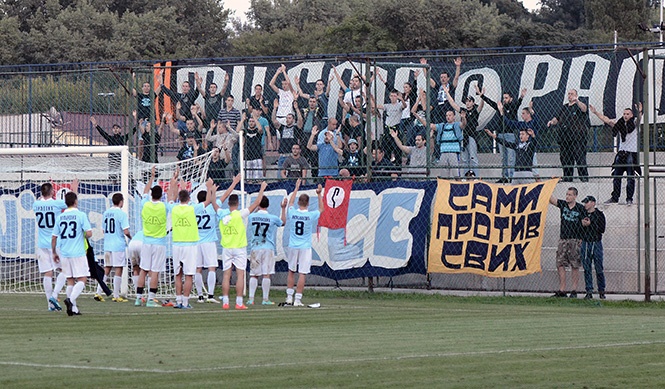 Having expected a boisterous, intimidating crowd and a poor game, I got a thrilling game and a largely soft crowd. I’m sure it’s not always thus but I can’t say I’m in a hurry to return. Rad? Bad really.